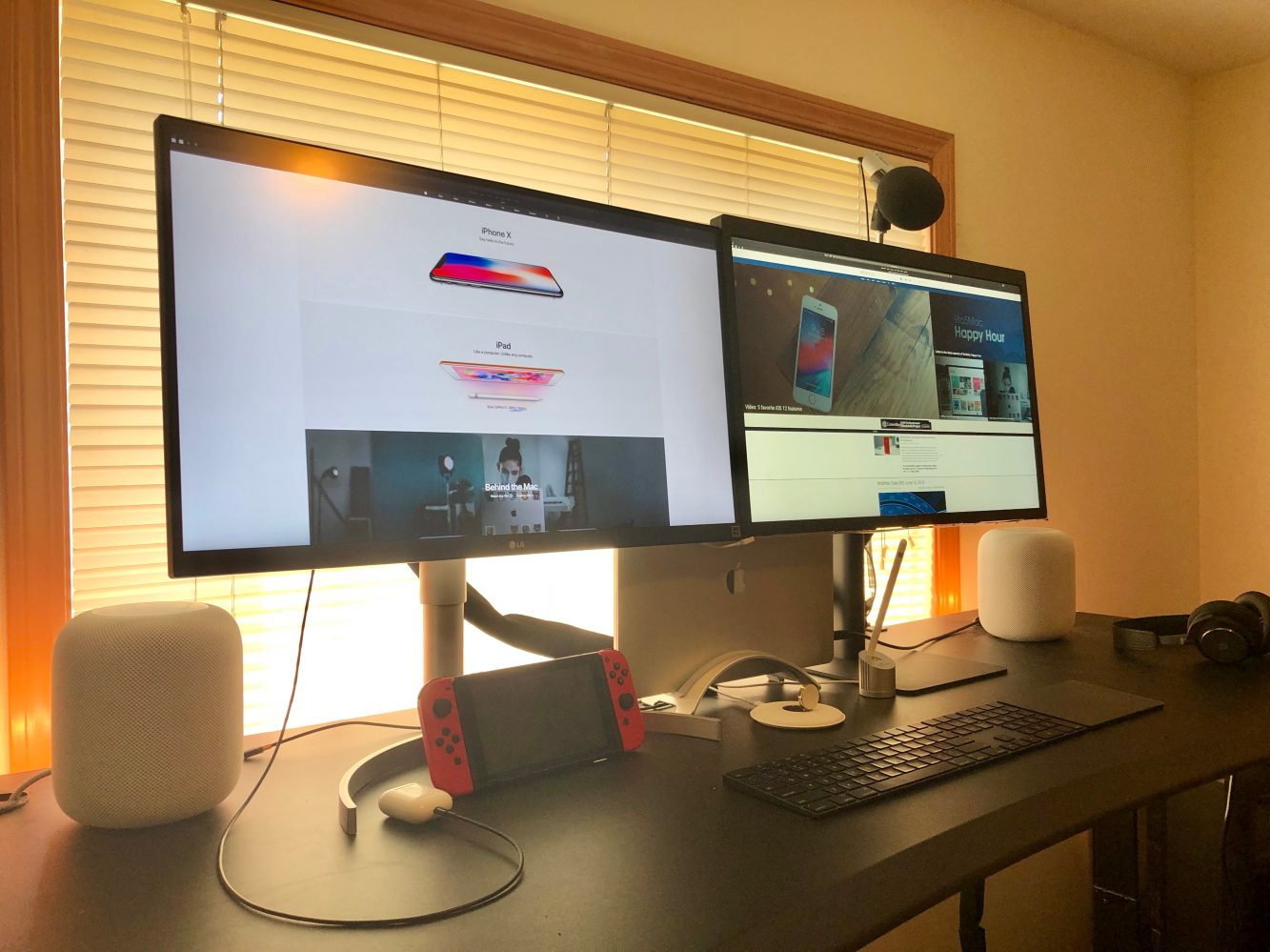 A few years back when the original 12-inch MacBook came out in 2015, people were clamoring for a monitor that could not only send video, but also audio, and power to the notebook all over a single USB-C cable.

In came the LG UD88-W, which was a 27-inch monitor that did just that. Our own Jeff Benjamin reviewed it here.

Now comes the 2018 revision of that monitor, the LG UK850-W. This monitor brings several enhancements I think Mac users will come to appreciate in the long run.

The first thing I’d like to note is that I was using this monitor alongside the LG UltraFine 5K display, which brings a few notable issues to the table. First and foremost, for the cable management freaks out there, you’ll have to plug in each monitor to opposite sides of the computer, similar to the 5K display setup. 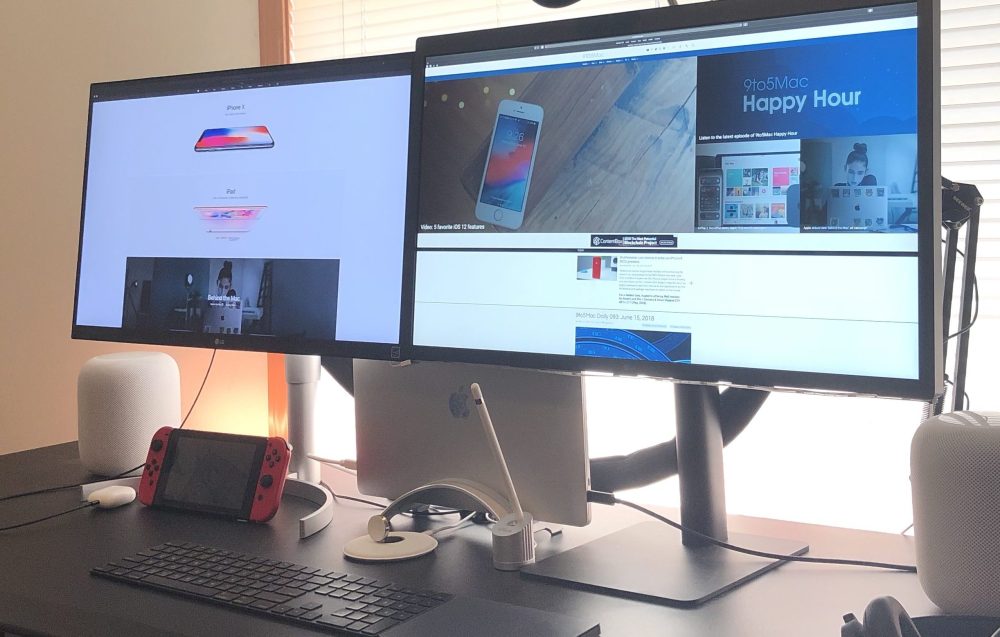 Another glaring issue is that the LG UltraFine is a glossy display while the LG UK850-W is a matte display. While I got used to this over time, it is something that may bother many users.

The display itself looks super sleek. It has an all black, plastic bezel, while the entire back is made up of this beautiful white plastic.This gives it a storm trooper look which I absolutely love.

The stand is made out of a hard plastic this time around as well, and can be height adjusted. The base is made out of aluminum, which gives it the weight it needs to stand on its own.

The monitor itself can be adjusted up to 180 degrees and can be used vertically if desired. macOS does support this option in System Preferences.

This monitor runs at 4K 60Hz no issue on a 2016 15-inch MacBook Pro, which is arguably the most important part. Being an LCD display and not OLED, the black levels are decent as expected for an LCD monitor. They’re not inky as it would be if it were an OLED display, but it’s not terrible.

The monitor supports HDR out of the box, but unfortunately macOS does not support this in any way, shape, or form. So I wasn’t able to test that at all.

It offers a physical joystick to change inputs or turn the monitor on/off. However, I preferred to let the monitor to go to sleep on its own by simply putting my MBP to sleep.

In terms of ports, you have 1x USB-C, 2x HDMI, 2x USB A 3.0, 1x DisplayPort and a 3.5mm audio jack to passthrough audio. Note that the USB-A ports only work if you’re connecting to your computer over a USB-C to USB-C cable. The USB-C port will offer up to 100W of power, video and audio, along with the aforementioned USB-A hub.

Unfortunately, the LG UK850-W does not have built-in speakers, so you’ll have to use the audio jack and external speakers/headphones if you’re wanting to get audio working properly. 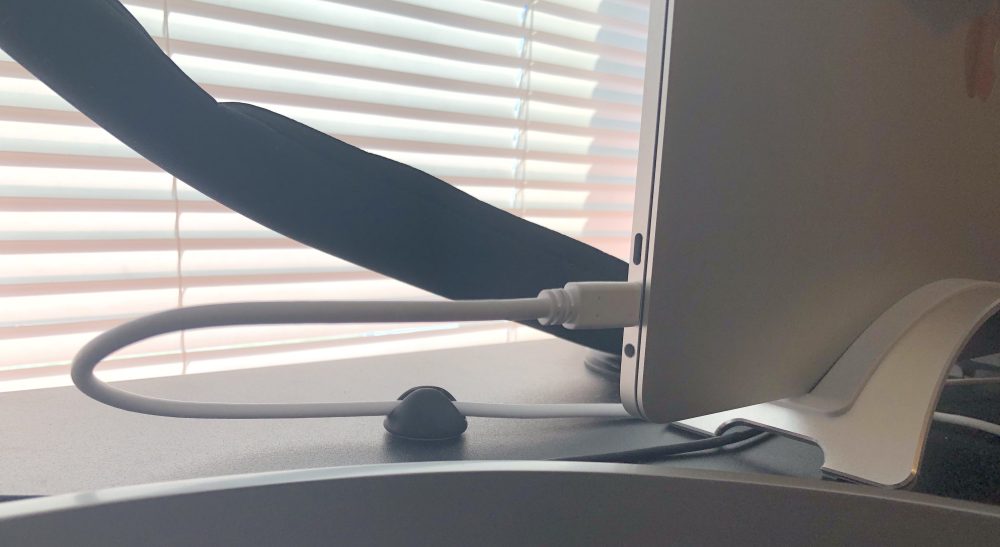 Those who know me know that I love to maximize space on my displays. On the LG UK850-W, I am running the display at its native 3840×2160 resolution, while I’m running the LG UltraFine at a scaled 4096×2304 resolution. Technically these are both 4K, but the UK850-W is running standard 4K while the UltraFine 5K is running at Cinema 4K, which offers slightly more space on the screen, but that’s even hard to tell with both of them side-by-side.

At the end of the day, unless you have an LG UltraFine 5K display right next to it, the LG UK850-W is a solid choice for Mac users. It allows for USB-C input which will charge the 12-inch MacBook, 13-inch MacBook Pro, and 15-inch MacBook Pro without a problem. In addition, it will let MacBook and MacBook Pro users have standard USB-A ports, which aren’t present in the current MacBook Pro design.

The matte display makes it easy to see in direct sunlight without any sort of reflections. It also offers full HDR support if users are planning to plug in an Apple TV or PS4 Pro to their monitor. While it lacks built in speakers or a camera, it makes up for it with its gorgeous display.

Unlike the UltraFine, the LG UK850-W uses standard USB-C and not Thunderbolt 3, meaning it will work on supported Windows machines with USB-C ports in addition to Macs. However, on Windows, charging the machine may vary by manufacturer.