This morning, eBay has announced its second batch of November deals, which are valid starting today through November 18th. Each day the online retailer will be rolling out new offers which they claim will beat advertised Black Friday prices coming later this month. We dove into eBay’s Better than Black Friday deals, and while there are some notable price drops coming down the line, not every one is as hot as you might think. Head below for some quick analysis.

After rolling out an aggressive First Deals promotion earlier this month, eBay has returned with a new batch of offers starting today, November 12 through November 18th. Each day, eBay will be unveiling a new set of deals on its Better than Black Friday landing page. Free shipping will apply for these deals.

Quantities are expected to be limited on these 1-day deals, so it’s best to dive right in if something catches your eye. But, as always, you’ll want to be an educated shopper and follow along at 9to5Toys. eBay is positioning these deals as “better than advertised pricing” coming down the line at Black Friday. And while they’ve done a nice job of pinpointing data in comparison to other retail locations, we’ve found that there may still be better deals to come.

eBay is advertising the next week of deals as being “better than Black Friday” — which, while true, we found to be somewhat selective in our research. A prime example is that eBay is advertising a Nest Thermostat E at $120, which is $19 less than Target’s advertised Black Friday price. However, our coverage of Dell’s Thanksgiving Week plans reveals that this popular thermostat will be marked down to $99. So while eBay is accurate in its positioning of this promotion, it’s selective in nature.

Another example is its inclusion of Apple AirPods at $149. Well, if you’ve been following closely at 9to5Toys, you know that we’ve regularly seen these below $130 in recent months. AirPods have been sitting at $145 on Amazon since late summer. So again, take eBay’s own data with a grain of salt and trust the experts at 9to5Toys where we’ll be sharing all of the best deals throughout Black Friday. 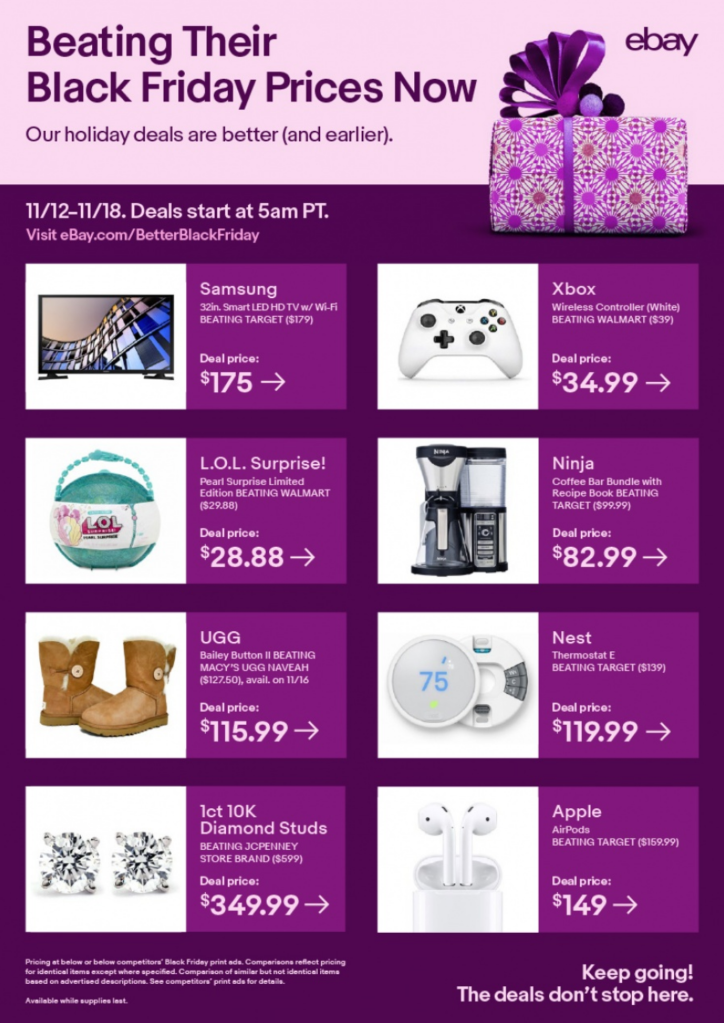