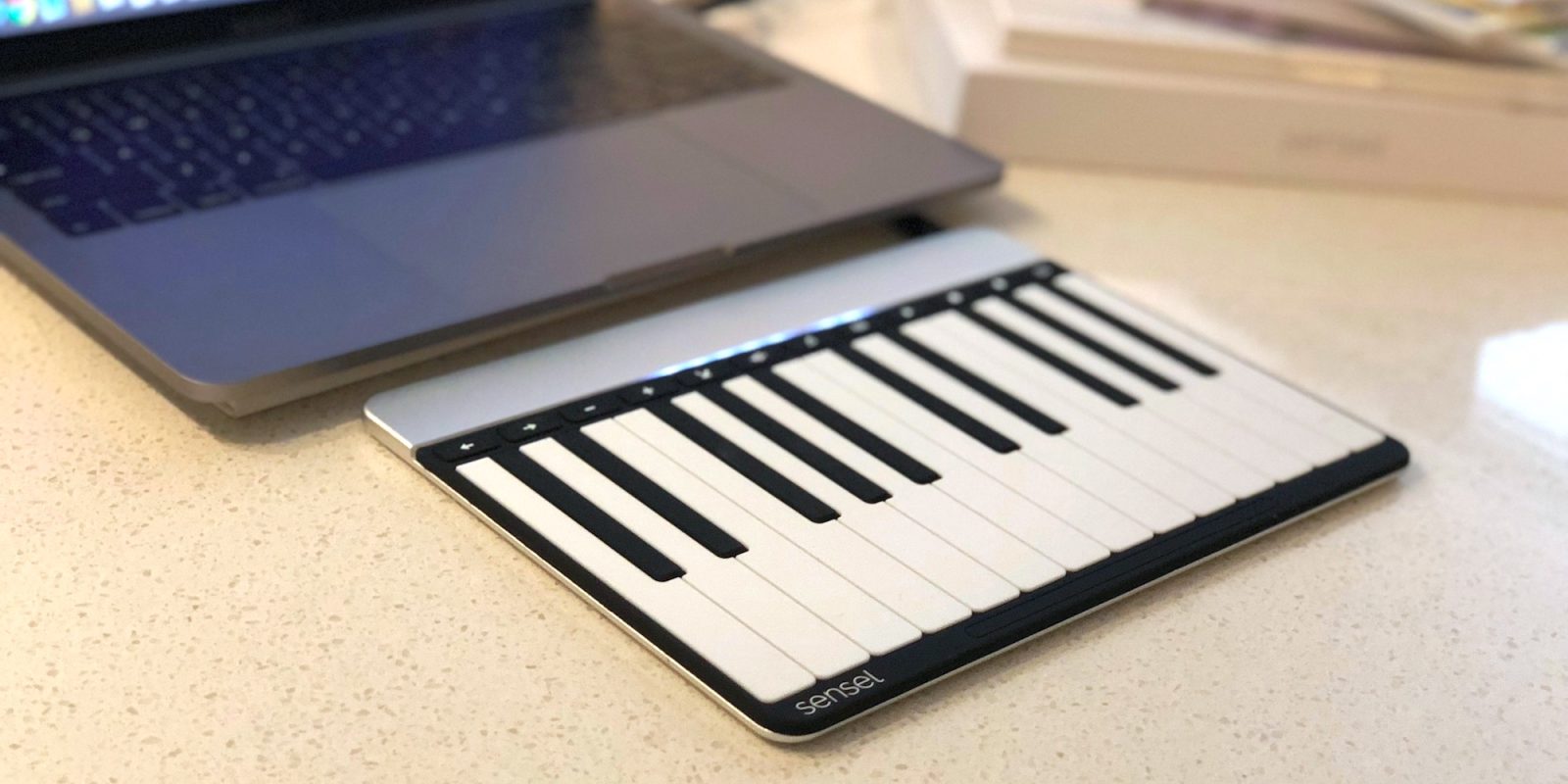 Today we are taking a closer look at the Sensel Morph Mac touch controller. Designed around haptic feedback technologies and advanced MIDI protocols (among other things), the Sensel Morph provides users with a transformable touch controller for just about any computer based application. The portable nature and immediacy of the machine has always caught our eye. So with the release of the new Buchla overlay we though it was time to take a hands-on look.

The Sensel Morph is essentially a thin slab packed full of sensors and roughly the size of an iPad mini. It makes use of a series of contextual overlays which immediately transform its application. The controller morphs from a digital art pad to a video editor control surface, MIDI keyboard or even a more complicated developer’s tool in seconds. These overlays are little add-on rubber sheets that you simply place on top of the Morph itself to alter its functionality.

This Mac touch controller features roughly 20,000 pressure sensors and can register hits from 5g up to 5kg. That amounts to an impressive 32,000 levels of sensitivity. You’re looking at 6502dpi for precision tracking and the ability to power it over USB or wirelessly via Bluetooth. While it is ideal for Mac setups, it also supports iOS and Android devices as well as Windows machines and more (our testing took place on a current generation MacBook Pro and an older Mac Pro). 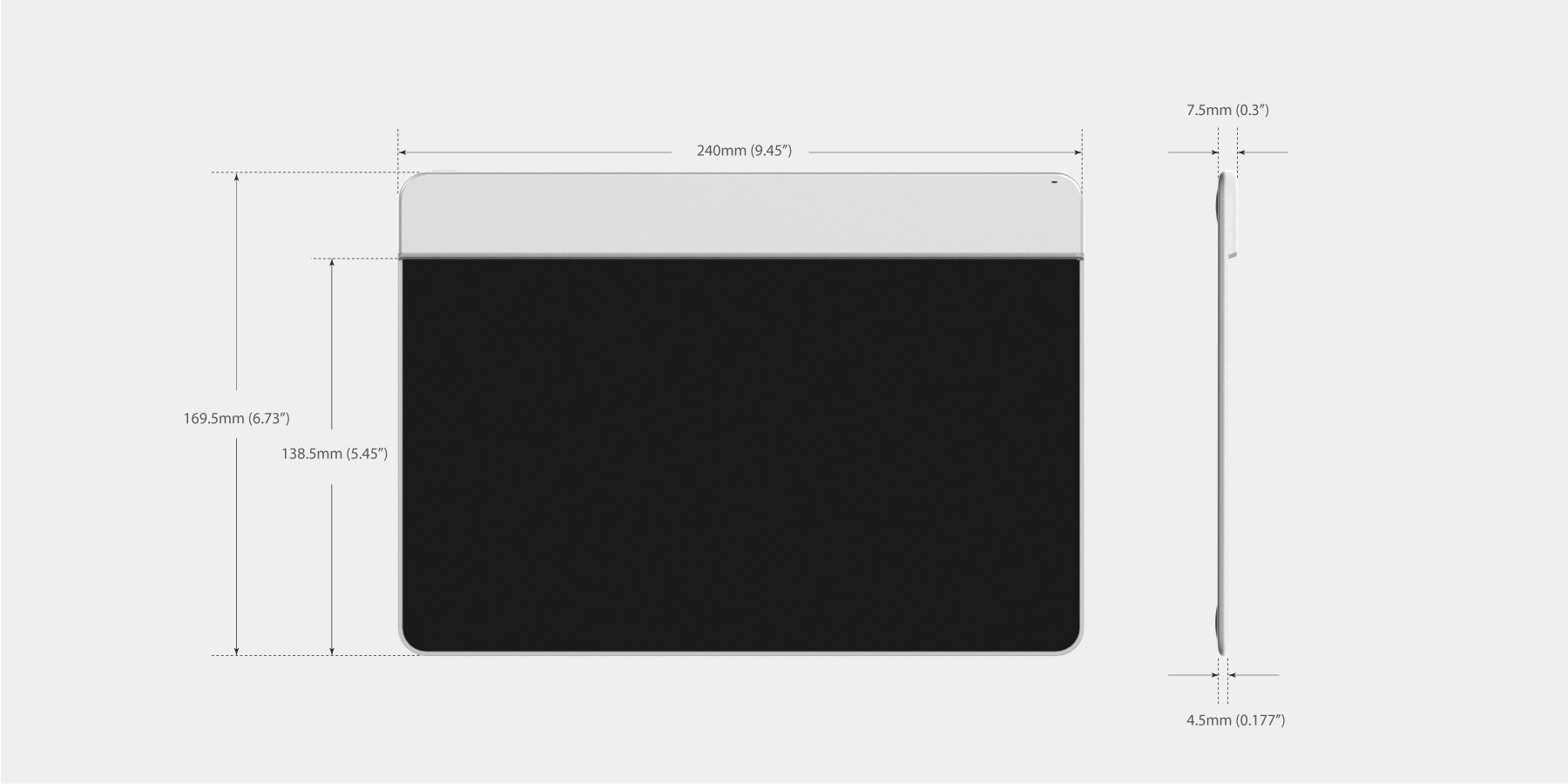 While I wasn’t really expecting much in terms of build quality, this Mac touch controller is actually quite solid. The aforementioned overlays have a gooey, rubber feel to them and just sit on top of the Morph’s main surface area. It has small rubber feet to keep the underside from getting scratched up as well. The packaging is nice, but nothing overly special and it includes a USB charging/connection cable. 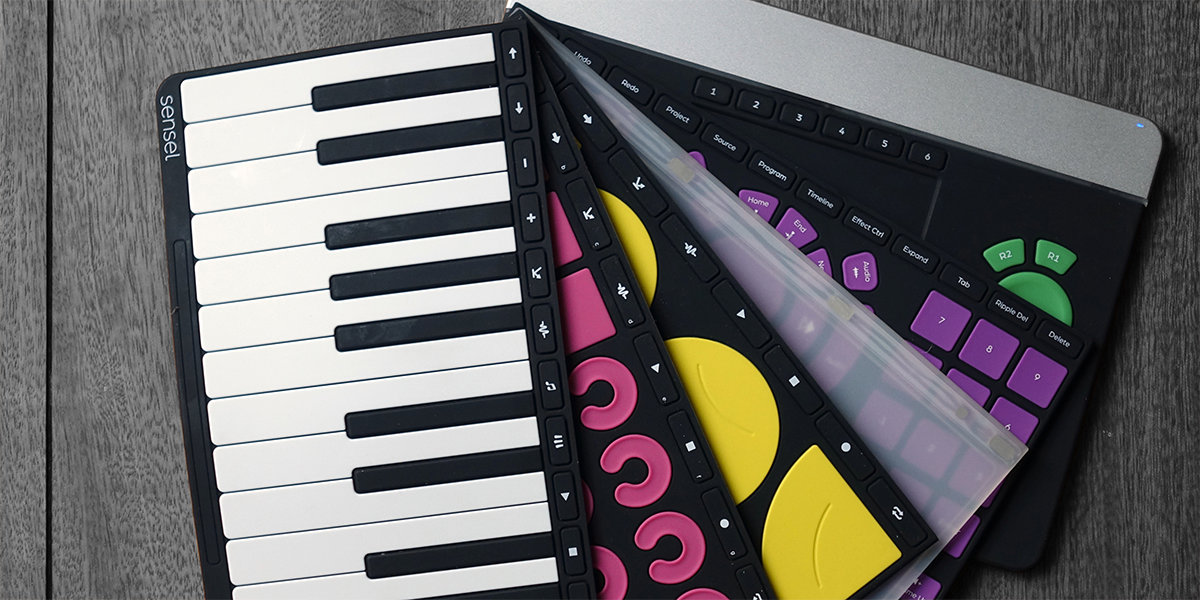 While I’m personally most interested in the music-making applications of the Sensel Morph, it is very much a capable Mac touch controller for others as well. The video editor overlay worked nicely with Final Cut Pro, despite having to manually alter some of the controller assignments to taste, and the QWERTY keyboard works great if you’re into that kind of thing. There’s also a developer/innovator’s overlay which allows users to create there own customized tech controller for whatever task they might require it for. Although you don’t really need an overlay at all for that kind of thing. Outside of music applications, this might be one of the highlights of Sensel Morph overall. No matter whether you’re an industrial designer, an app developer or a hardcore gamer, there is more than likely an easy way for you to introduce the Morph in to your workflow. 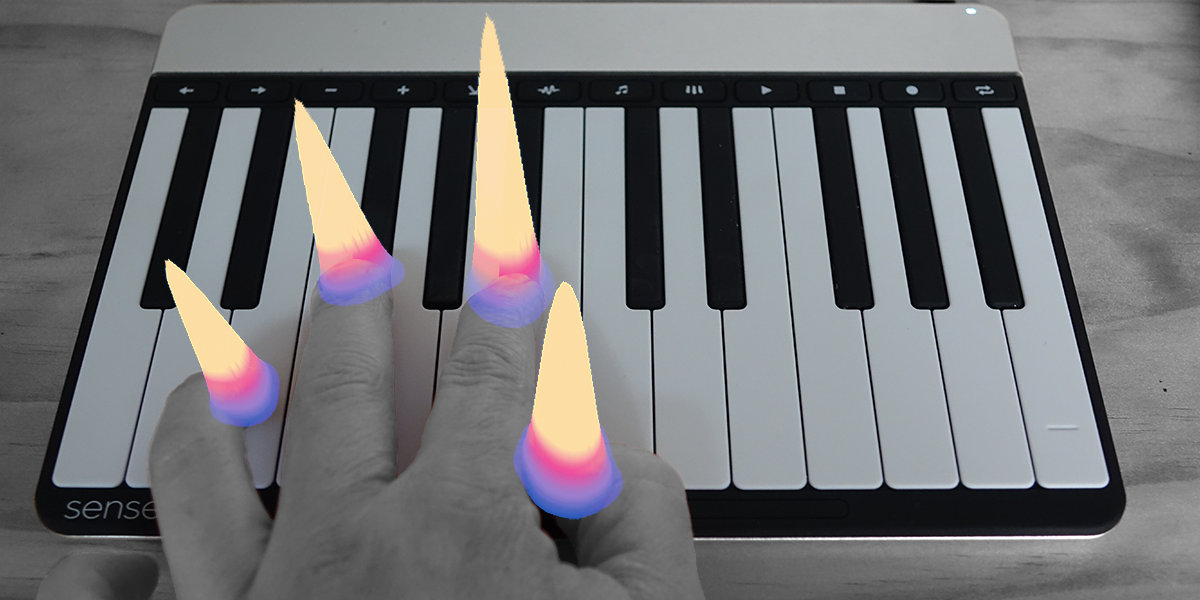 That brings us to the Sensel Morph app. The free application is your hub for controlling and customizing your experience, among other things. You can create new assignments for each of the overlays available or begin to craft your own bespoke touch controller. For example, if your’e using the MIDI keyboard controller, the Sensel app will allow you to customize the assignments for each of the controls (full support for MPE and MIDI 2.0) as well as provide visual feedback for the way your assignments are reacting to physical inputs. While not overly useful for those looking to just plug-in and go, when creating a custom multi-touch polyphonic music controller I found the Visualizer to be extremely helpful. 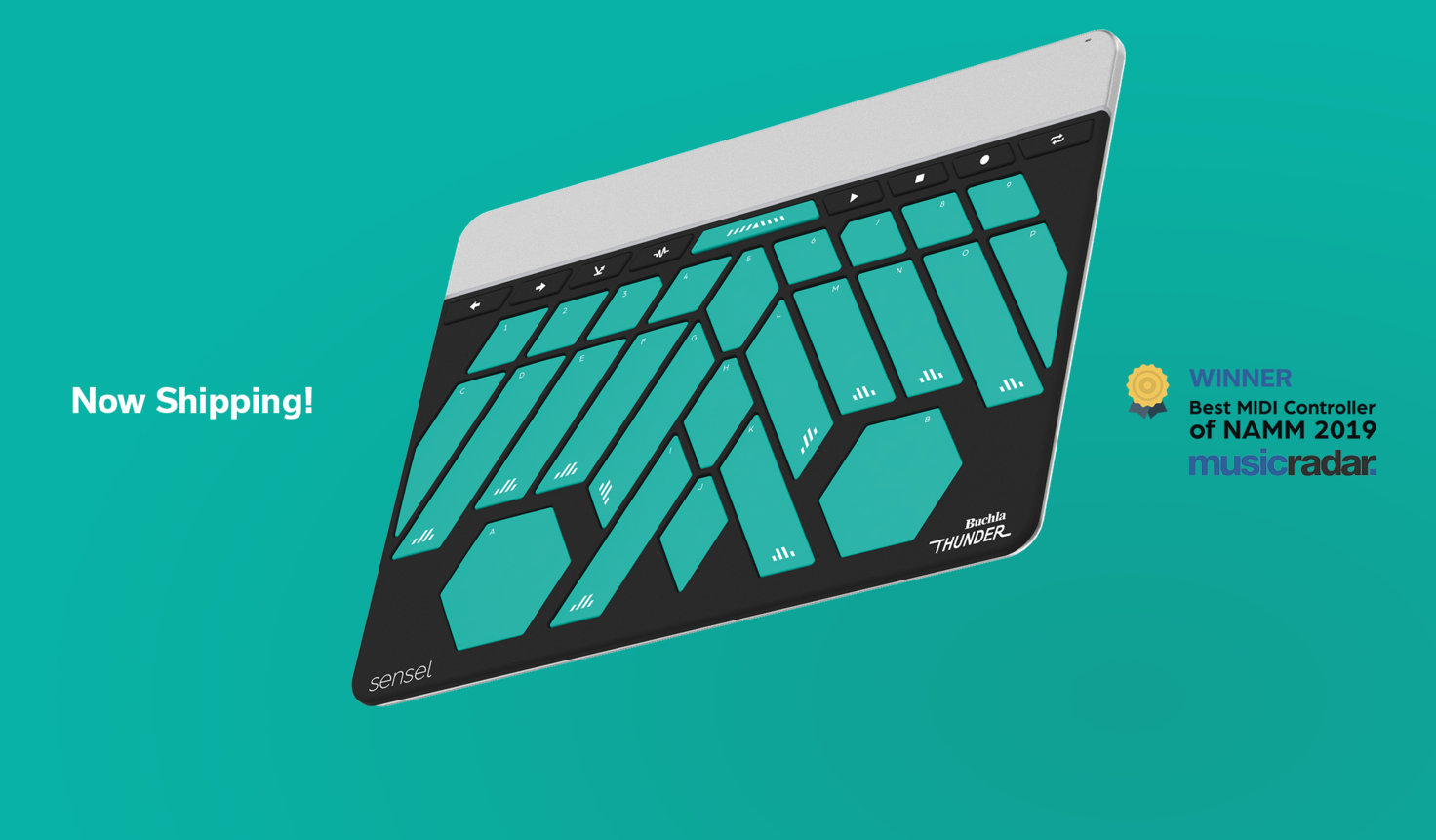 The latest overlay to be made available for the Sensel Morph is known as the Buchla Thunder. This is the latest entry in the overlay lineup which already includes options for MIDI keyboards, drum pads, video/audio editing, digital art tablets, gaming pads, custom developer surfaces and more. It designed after an obscure Buchla music controller from yesteryear and brings a unique setup of controls to any music makers toolkit. You can store up to 9 different preset mappings on this one that can be recalled without the use of the app (unlike the other overlays). Again, this one can be used for almost anything depending on how you set it up. But I found it be an excellent and quite unique MPE music controller. It almost forces your fingers to do things they would never normally consider on a typical setup simply due to the odd layout, shape of the buttons/sliders and unique look. 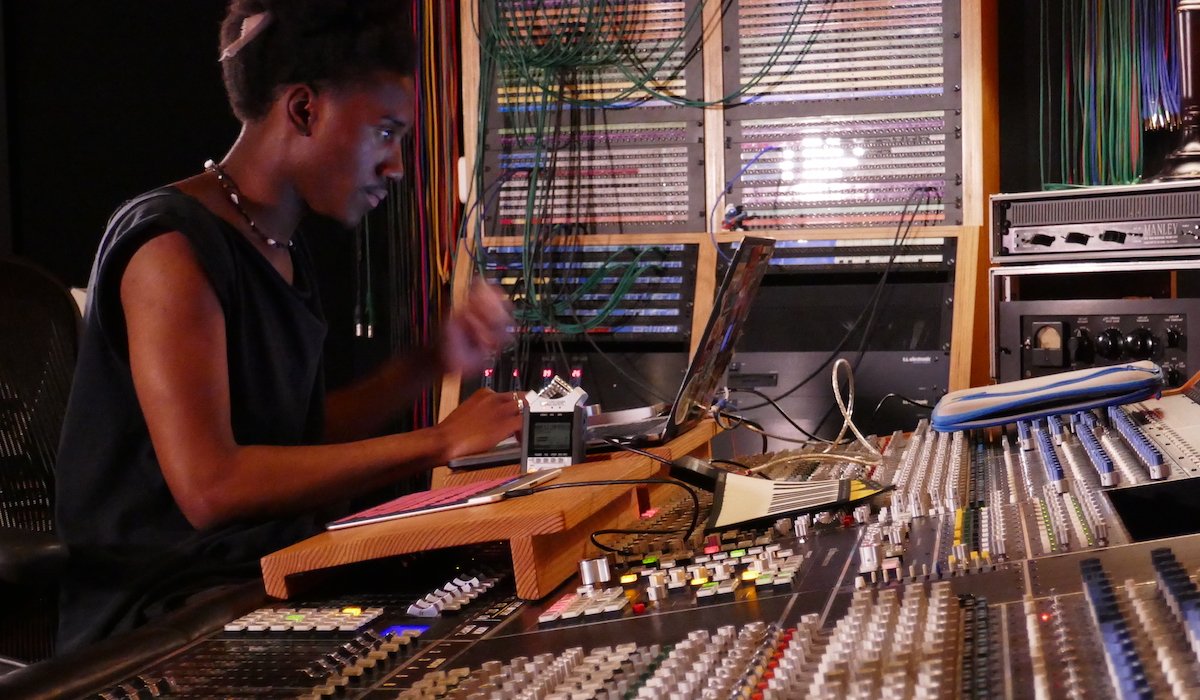 In my time with this interesting little Mac touch controller, it was its integration with MPE virtual instruments where I found it to be most useful. While I have previously been a huge fan of the Seaboard 5D touch controller, the Sensel app takes the customization even further. I prefer the squishy alien texture of the Seaboard over the much thinner rubber overlays, but there’s no denying how niche the Seaboard really is. You can throw the Morph in your bag and feel confident you’ve got a MIDI keyboard, drum pads, QWERTY keyboard, and a video editing desk in one small package.

While I might have appreciated some more girth and tactile materials for the overlays, this really is an extremely universal touch controller. There really aren’t very many options out there (if any) that can easily move from application to application this quickly and easily. And this is where the Sensel Morph truly outshines its competition.

Yes I would prefer the Seaboard 5D touch controller over the Morph, but that’s only for the most pitch bending musical flourishes you could imagine. The Seaboard and other single application touch controllers can’t convert into a QWERTY keyboard or a video editor surface or drum pads or a gaming controller or…OK I’ll stop now, you get the point.

If its versatility and biggest band for the buck you’re after, look no further than the Sensel Morph. While I wish everyone could have a chance to give it a try before dropping the $249, that’s just not realistic. But you can however, feel more comfortable with the 30-day money back guarantee (no restocking fees).

The Sensel Morph touch controller sells for $249 with one free overlay. Additional overlays start at $35 and go up from there. And while we don’t have the details just yet, we are expecting even more overlays to come down the pipeline in the future.