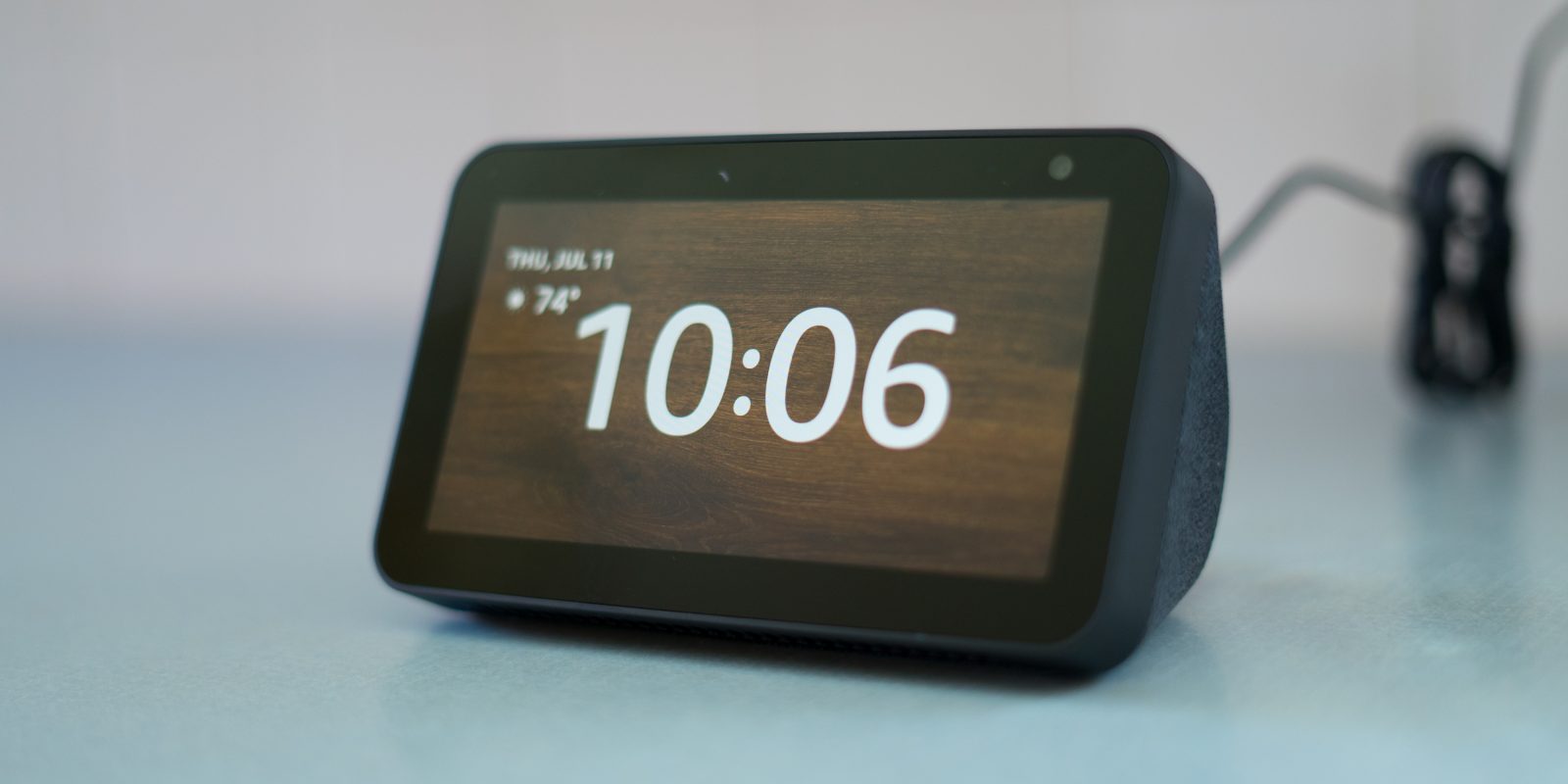 The third display-laden product in the Amazon Echo line, the new Show 5, is a more compact and affordable Alexa powered smart display priced at $90. It comes in as a less-priced alternative to the older Echo Show 2nd generation, which is still available, that packs a 10-inch screen and is priced at $229. Check out the video below for a hands-on look at the new Echo Show 5.

The new Echo Show 5 gives an immediate first impression as an attractive compact smart display. It’s pretty minimal with the screen taking up most of the front and a nice wedge shape going towards the back of the body. On the top are buttons for volume up and down, mute video and audio, and the shutter control that will cover up the camera for added privacy.

On the back, there is the power plug for a micro USB port and then a 3.5mm output. The output lets you connect an Echo Show 5 to another sound system if you’d like to boost the audio more that what’s built-in.

From a device as small as the Echo Show 5, the sound is decent but not great. Of course, there isn’t a whole lot of low-end, but mids and highs are clear and crisp, not too muddled. It gets pretty loud as well – easily filling a room. It can start to distort when pushed to full volume, though. Even when playing music at a loud volume, the Show 5 was able to pick up my voice and understand commands. If you plan on listening to a lot of music, opting for the premium sound from an Echo Show 2nd generation model might be a better bet.

I’ve had the original Echo for quite a while in my kitchen and enjoyed having audio at my command. But, adding the video features from the Echo Show 5 adds even more convenience. It won’t play content on YouTube, but it will show music videos from Vevo if you want a little morning jam session. 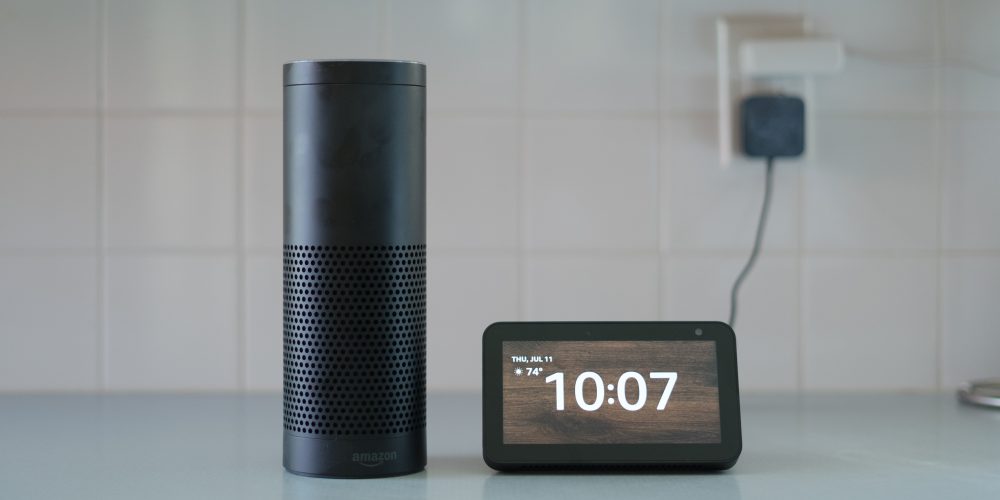 With the built-in one megapixel camera, the Show 5 also allows video calling. Once setup, you can call other Amazon devices with a screen or anyone with the Alexa app. Skype can also be enabled, though I had to search around to figure out how to connect it. It wasn’t apparent anywhere in the Alexa app. And if privacy is a concern, the camera can be covered up with the built-in shutter.

When paired with other compatible video devices, like the Eufy Video Doorbell or Ring Doorbell, Echo Show 5 can also enable you to see who’s at your door and talk to them via the built-in microphone. 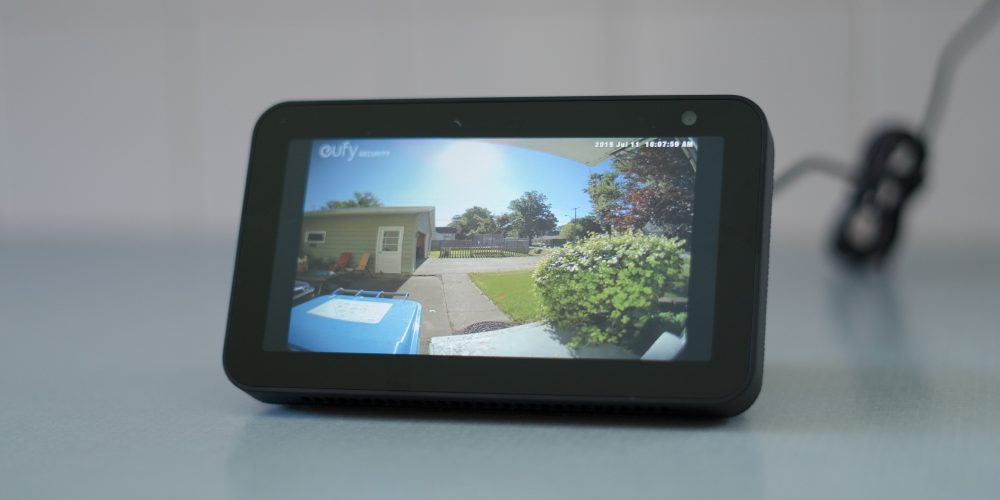 By swiping to the left on the screen, Show 5 is a quick and easy way to control any compatible smart devices you have installed in your house. Smart doorbells, Hue lights and various other connected devices can all be accessed and controlled from the panel.

The touchscreen is responsive, but occasionally selecting functions can take a few seconds to execute on the screen. It feels like the processor is a little slow and the Show 5 is sluggish in calling up some commands.

For use in a bedroom as an alarm clock, the screen detects ambient light and will dim into a night mode where text displayed on the screen turns red to be less intrusive at night.

I set up the Show 5 in my kitchen, but it would also be handy to have in a bedroom, living room or anywhere else. With features like routines, Echo Show 5 can set some automation triggered by voice, schedule, or a variety of other inputs. Alexa can turn off all the lights and make sure the door is locked when heading to bed just by saying good night – when setup with compatible devices. 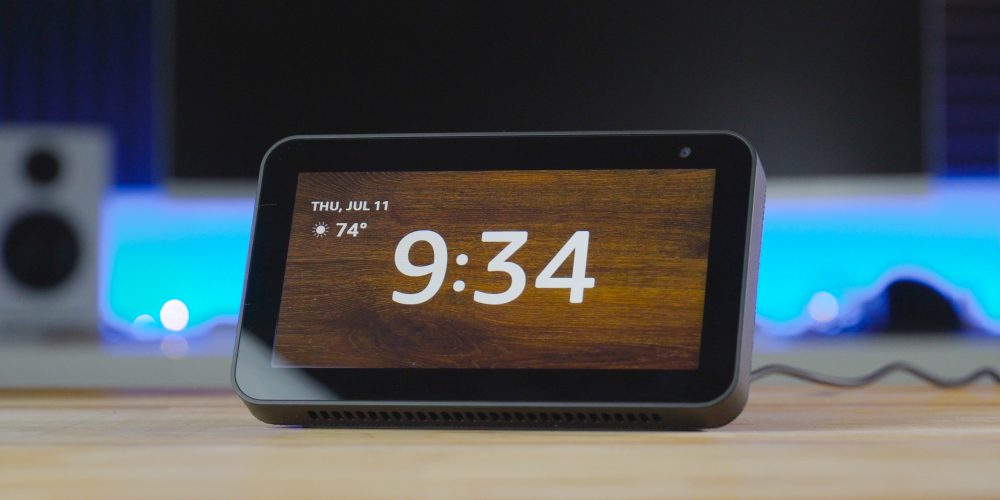 With its much smaller footprint and price tag, the Show 5 is a great option as a budget-friendly smart display. My examples above are obviously just the tip of the iceberg to what can be done with the Show 5. With over 80,000 skills and growing every day, Alexa is constantly learning new tricks. Alexa has a different set of controls than what’s available with the Google Assistant smart displays like the Google Nest Hub, but if you’re in the Amazon ecosystem, the Show 5 is a great way to add a smart alarm clock to your bedroom or a virtual assistant in your kitchen.

For more ideas on what all can be done with Alexa, check out Simon’s Echo Dot diary – where he gives examples of how he is using Alexa powered products in his every day life.