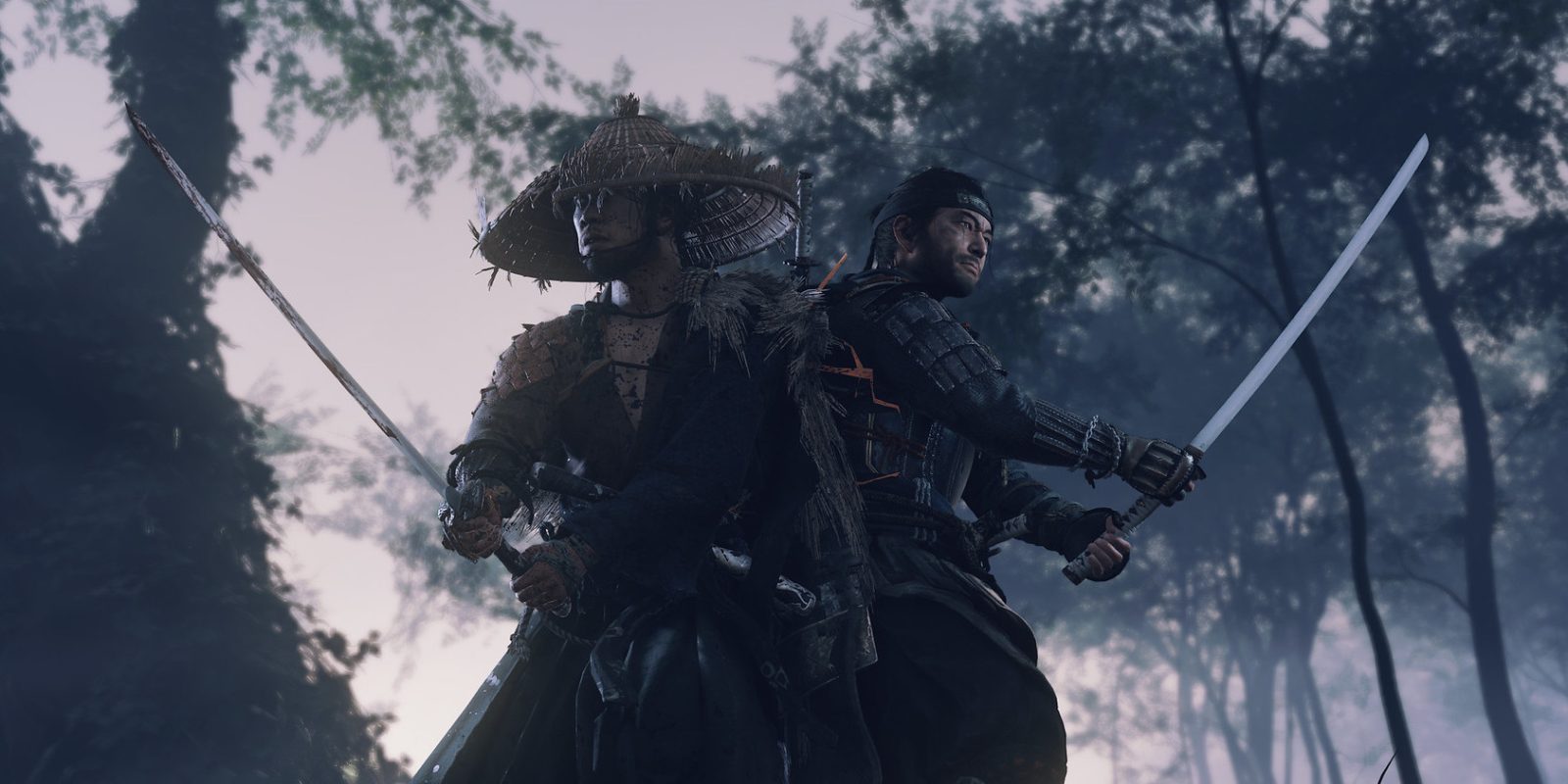 Sony is finally giving us a firm Ghost of Tsushima release date today. The highly-anticipated open-world samurai game from Sucker Punch studios has been a long time in the making. Still, it looks like the game is finally getting a solid release date some three years after being initially unveiled. Along with details on the deluxe and collector’s editions, Sony also dropped a brand new story trailer. Everything is down below.

Before we get to the Ghost of Tsushima release date, trailer, and collector’s editions, here’s a quick refresher on what to expect. This is massive open-world game set in feudal Japan circa 1270 during the Mongol Invasion of Tsushima Island. Players take on the role of Jin Sakai — a samurai turned rebel ninja — in his attempt to push back the ruthless general Khotun Khan of the Mongol Empire. And if you have seen any footage from the game thus far, you’ll know it looks even better than it sounds.

Today’s trailer focuses on Jin Sakai and some of the characters he meets and interacts with. Some of these include the Khotun mentioned above Khan and Jin’s uncle, Shimura, the Lord of Tsushima. Shimura is responsible for teaching Jin the ways of the samurai but “grows increasingly concerned by the tactics Jin starts to adopt as he abandons his teachings and becomes The Ghost.”

On top of the Ghost of Tsushima release date, Sucker Punch is releasing details on the upcoming deluxe editions of the game. Firstly, the physical Special Edition includes a SteelBook case, a voucher for an in-game Hero of Tsushima mask and sword skin, Charm of Hachiman’s Favor, one technique point, the Director’s Commentary, and the digital mini art book for $69.99 (now available for pre-order on Amazon). 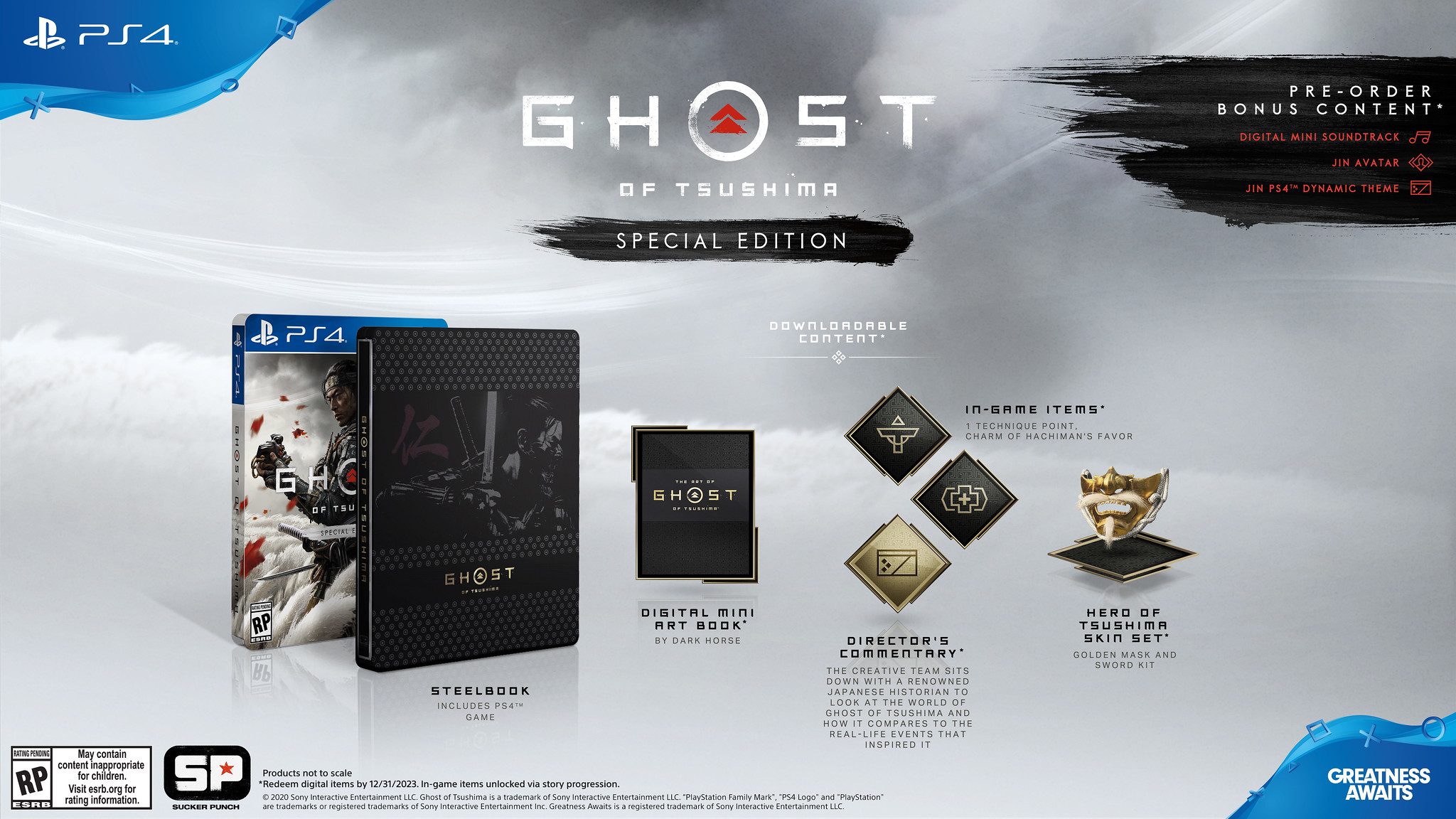 The Collector’s Edition, as expected, will be the big boy package here and run you $169.99 (now available for pre-order on Amazon). The star of the bundle is a “heavy” polyresin replica mask based on the one you wear in-game. But you’ll also get a 4.5-foot long sashimono (war banner), a traditional-style furoshiki (wrapping cloth), and everything found the Special Edition above. 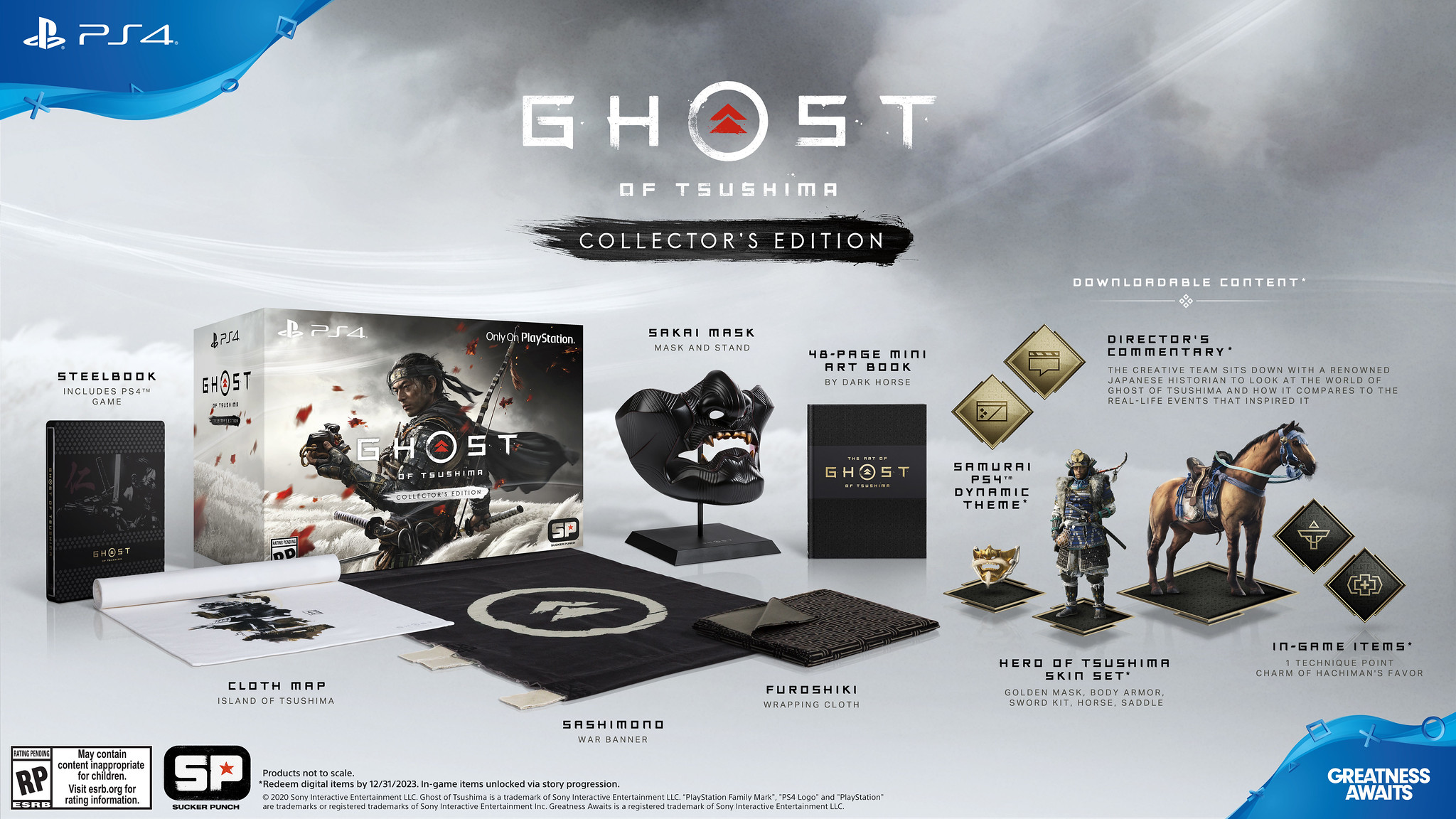 As usual, standard pre-orders for the game will also include some extra goodies (“a Jin avatar, a digital mini soundtrack featuring select songs from the game, and a Jin PS4 dynamic theme based on our box art”). At the same time, the Digital Deluxe version comes with a series of perks as well. Those include the Hero above of Tsushima skin set, Charm of Hachiman’s Favor, one technique point, a PS4 theme, and a digital mini art book.

The Ghost of Tsushima release date is set for June 26, 2020, according to today’s PS Blog post from Sucker Punch. Pre-orders are not yet live on Amazon, but some versions are now available at Best Buy.

There’s nothing overly groundbreaking about today’s news outside of the fact that the wait for Ghost of Tsushima is almost over. The special editions are the usual affair with in-game extras, but the collectibles here do seem quite substantial. Nothing out of the ordinary, but it does seem like the Collector’s Edition is sitting on the higher-end of these sorts of special edition packages. I’m not the type to spend more than I need to just play the game, but that mask and sashimono would look amazing on the shelf.