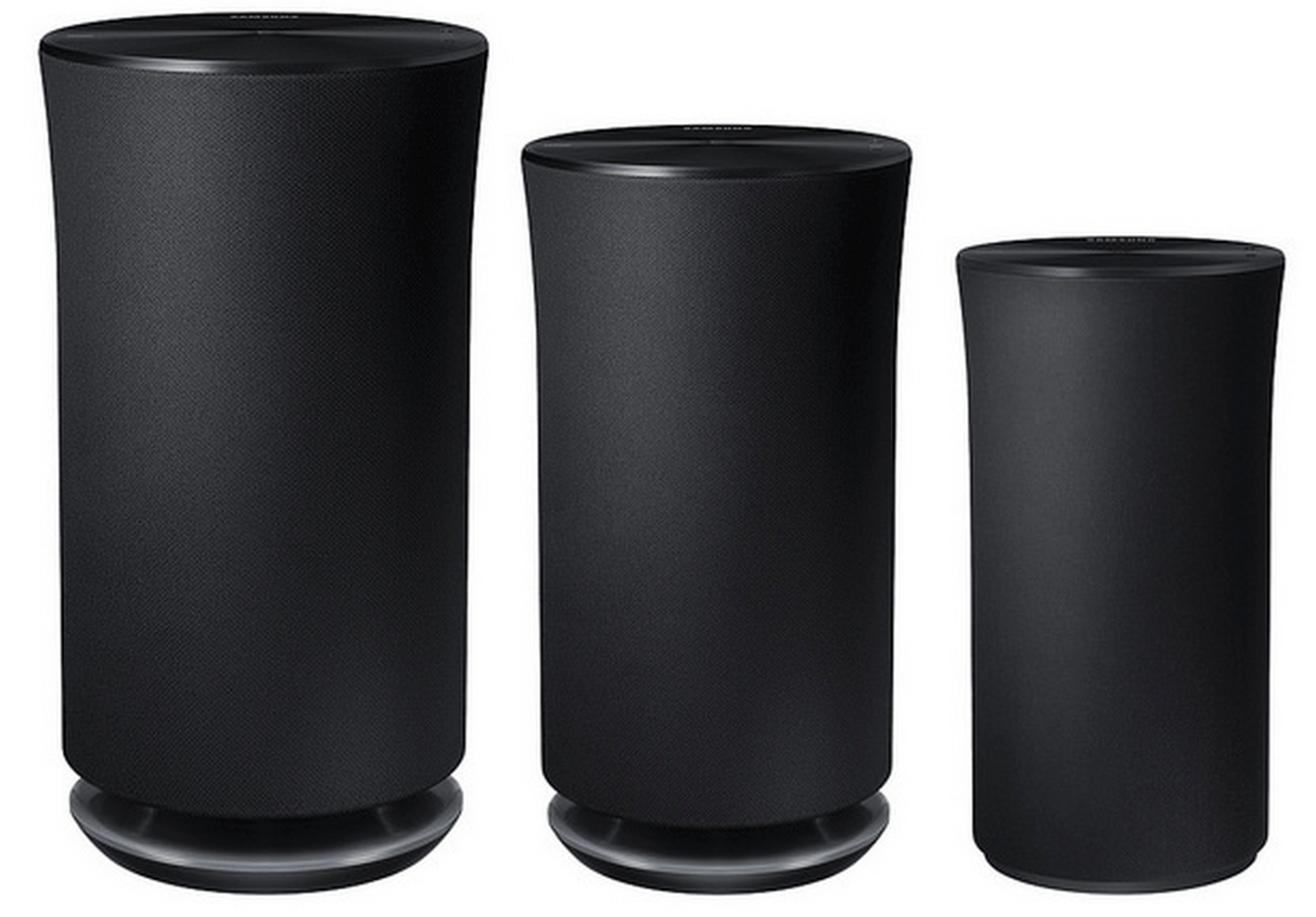 Samsung continues to take aim at SONOS as it further pushes into the whole home audio market. Today, the electronics manufacturer has revealed three new 360-degree multi-room speakers. The R1, R3 and R5 are smaller and lower priced models than the $500 R7 that Samsung first detailed back in April.

Significantly dropping the entry level price should spike interest amongst consumers that are looking for an alternative to other ecosystems currently on the market.

In case you’re not familiar at this point, whole home audio solutions bridge multiple speakers in different rooms together to play the same music in unison or different sources individually. This differs from AirPlay or Bluetooth speaker systems which are generally locked into one device playing music at a time. SONOS has ruled this category over the last three years but is seeing increased pressure from LG and Samsung, amongst others.

Samsung’s new speakers have a slender black cylindrical design with 360 degrees of drivers, tweeters and woofers. A new proprietary “ring-radiator” has been added that will “fill any room” with sound. Physical controls – mode, play/pause and volume – have been place on top of the speaker. This is a welcome addition that erases the need to pull out your smartphone every time the music needs adjustment.

Android and iOS users are also getting a refreshed multi-room app for controlling playback. Samsung has simplified its software, bringing search, library and playlist functionality to one screen. Additionally, the multi-room app is now available on Samsung’s Gear S smartwatch.

The three models announced today will start at $199 and top out at $399. It’s unclear if the mid-level speaker will carry a $299 tag or not. This pricing is in-line with SONOS, which starts at the same $199 for the entry-level PLAY:1. All three speakers will be available by the end of the year in the United States and Europe.

Samsung Electronics announced three additions to its Wireless Audio 360 speakerrange – the R5, R3 and R1 models which will be displayed at IFA 2015. The omni-directional speakers feature a new built-in tap-and-swipe user interface and an improved Multiroom app for customers’ smartphones, tablets and smartwatches.

The R5, R3 and R1 models follow the widely praised R7 and R6 speakers in Samsung’s Wireless Audio 360 line-up, and offer the same high-quality, balanced sound, and premium table-top design that enables them to fit seamlessly into any home.

“With these additional models we are bringing a new kind of high quality sound to the market, with design that is simple, yet premium, and offers a more intuitive user interface,” said Jurack Chae, Senior Vice President of the Visual Display Business at Samsung Electronics. “The R5, R3 and R1 will help cement Samsung’s position as a world leader in home audio.”

Sound that fills the room

Both consumers and media throughout the world praised the R7 and R6 models, emphasizing how crisp and clear the sound is, and how the detailed mid-range can fill any room, thanks to the proprietary ring-radiator technology that is also featured in the R5, R3 and R1 models.

The R5, R3 and R1 models also exclusively feature new physical control options for a hassle-free and intuitive user experience. Consumers can now change the volume, play, pause, or select a different music source all with a gentle touch, tap or swipe on top of the speaker.

Sound that follows you seamlessly

The R5, R3 and R1 models connect with the updated Multiroom App for Android and iOS smartphones and tablets, making it possible to seamlessly share music across Wi-Fi connected devices throughout the home. The app also allows users to easily find and select music, and create playlists all from a single screen.

Samsung’s updated Multiroom app also now works with the Samsung Gear S and will be operated with Samsung’s upcoming smartwatch thanks to a simple user interface that does not depend on a smartphone to operate.

Smartwatch functionality includes immediate control of music playback and volume control, as well as playlist and queue searching. Users can also view the “now playing” screen and access a list of available speakers, all with a simple swipe of their smartwatch.

High resolution streaming on all devices with Qobuz

The new models will be available in the U.S. and European markets in the last quarter of 2015, with prices ranging from US $199 to US $399. More news on regional availability will be announced during the coming months.