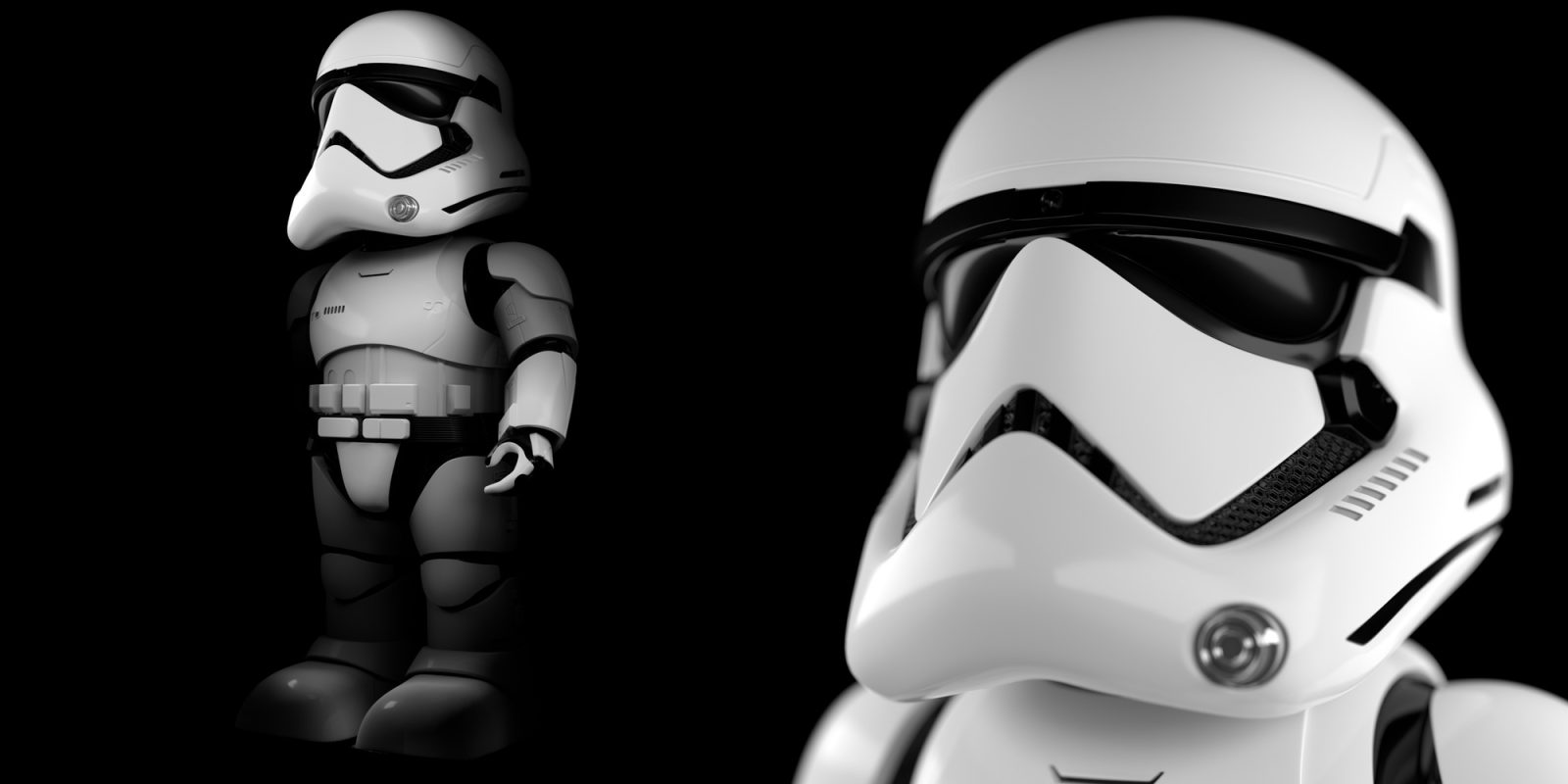 UBTECH has been in the consumer robotics game for some time now. At the beginning of the year they unveiled an Alexa-enabled robot and now the company’s collection of friendly bots has expanded once again. Thanks to a partnership with Lucasfilm and The Last Jedi, UBTECH has brought one of the fearsome First Order Stormtroopers straight out of the film and into your home.

The company’s new 16-inch First Order Stormtrooper packs much of the functionality found in order robots in UBTECH’s lineup. It’s entirely self-balancing so it has no problem walking around and UBTECH has also gone as far to include facial recognition alongside some even more impressive Augmented Reality technology.

As most robot toys do these days, the Stormtrooper pairs to a companion iOS and Android app that allows you to take direct control of the trooper. The app also provides access to an Augmented Reality game mode that allows you to bring the battle against the Resistant to your very own family room. In order to make it more immersive, UBTECH has added voice controls to the Stormtrooper as well. This means you can command your new First Order solider to do your bidding just like Kylo Ren would. 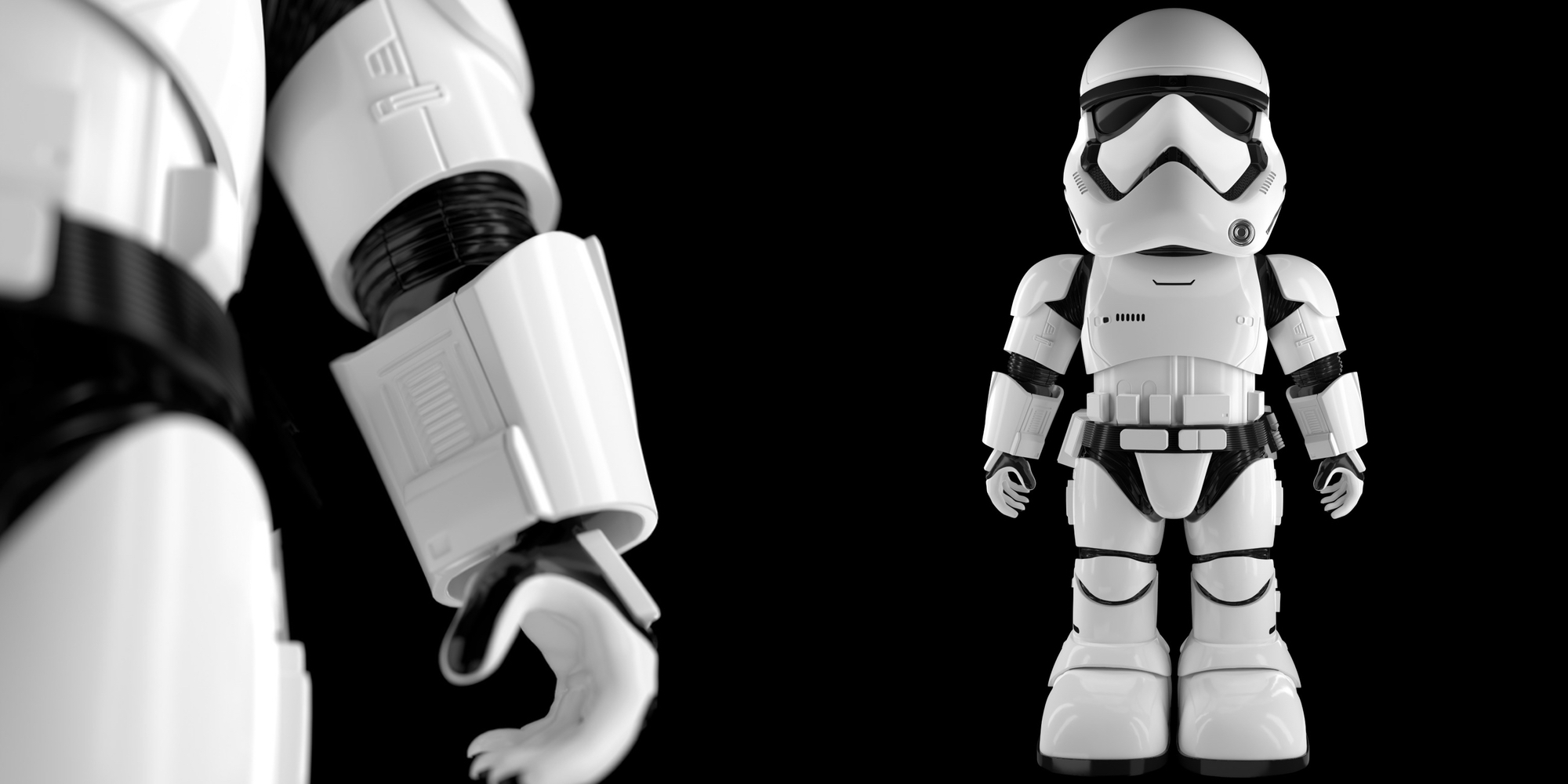 Aside from just carrying out your wishes, the robot can automatically patrol an area with its Sentry Mode. Once the Stormtrooper enters this mode, he’ll monitor the surroundings for intruders. To help out with this, the bot is also fully equipped with facial recognition to differentiate between friend and foe. UBTECH’s Stormtrooper can even reply differently based on who’s ordering it around.

Because the Stormtrooper does collect voice data, images and other sensitive information, UBTECH notes it employs an advanced encryption technique to ensure that all of this data is stored safely.

The menacing new Stormtrooper robot is available for preorder today directly from UBTECH’s site. It retails for $300 and will be releasing sometime in November, so those who lock one in early won’t have too long to wait. While you might be more partial to the iPhone-controlled Sphero Droids, UBTECH’s latest robot packs plenty of play features into the 16-inch robot and is sure to be a big hit this holiday season.

·      First and Third Person AR (Augmented Reality) App Modes: Protect the First Order against the Resistance in your own room, issuing direct verbal orders, and launch attacks via the app interface in first and third person views for immersive interactive app play.

·      Voice Commands: Speak directly to your Stormtrooper to interact in new ways.

·      Facial Recognition: Create a database of up to three faces using the facial biometrics feature for customized interactions. Note that the Stormtrooper Robot does not connect to the internet and lives within a closed network.

·      Sentry Patrolling:  Order your Stormtrooper to patrol the designated area to detect and respond to intruders.

·      Connect via secured WiFi on an encrypted platform: Platform encrypted to meet at least the minimum Advanced Encryption Standard of 128 bits and no data or personal information is saved to the robot or the companion app.

The Star Wars First Order Stormtrooper Robot by UBTECH retails for $299.99 and is available for pre-order at starwars.ubtrobot.com and Amazon.
For more information on UBTECH and its complete line of robots, please visit ubtrobot.com.