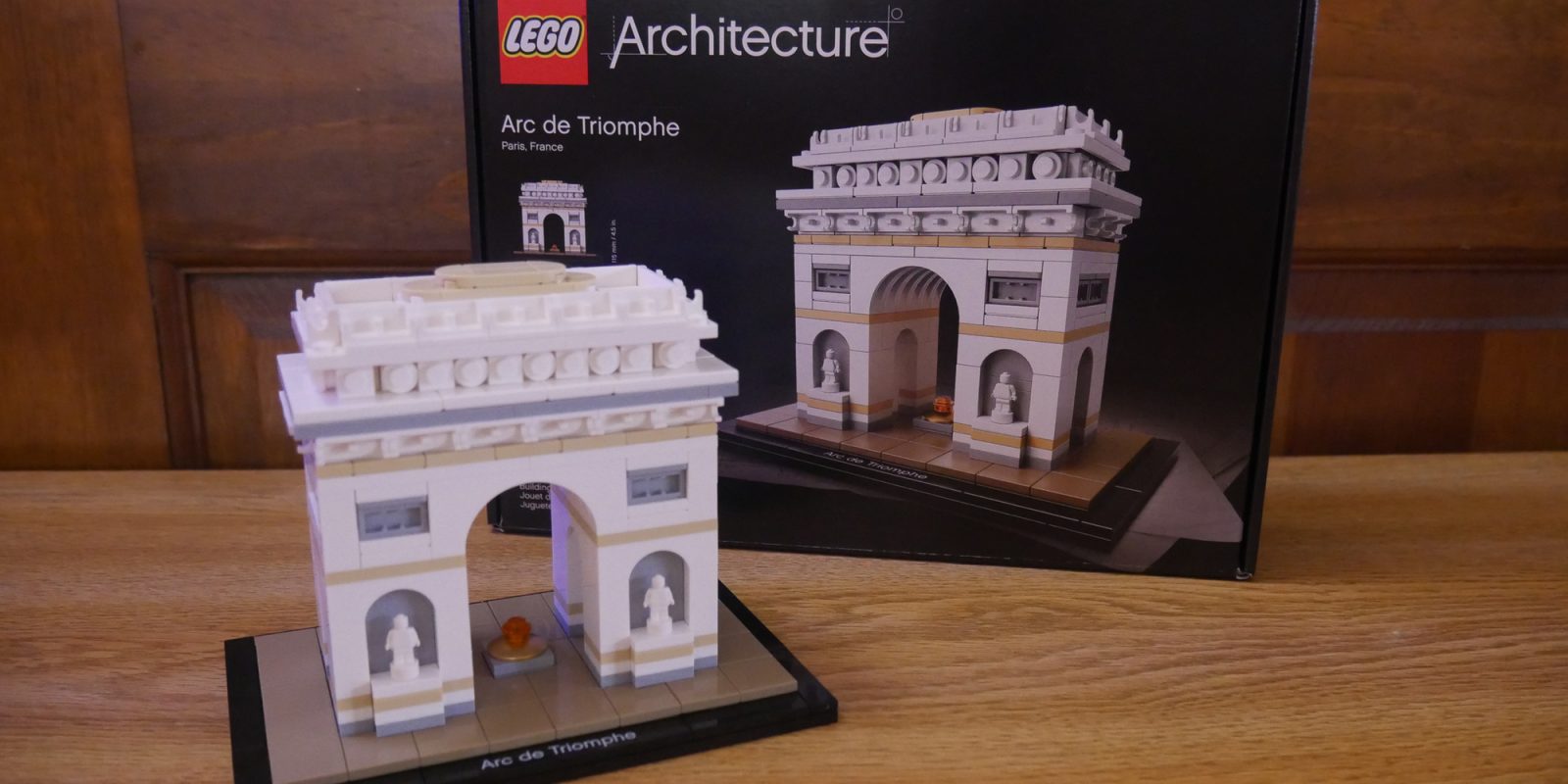 LEGO’s line of Architecture kits are known for being exciting, detail-packed builds and even better display pieces. In the past few years we’ve seen iconic buildings like the Louvre, the Eiffel Tower and more. But now LEGO has extended its collection of French monuments with the recently unveiled Arc De Triomphe. Today we’ll be taking a hands-on look at the brick-built rendition of the famous 17th century landmark.

Back in 2009, LEGO unveiled the Architecture line to a warm welcome from fans. The series began in conjunction with Adam Reed Tucker, an Architectural Artist who had been recreating prominent landmarks for some time in the brick-built medium. While other sets focused on the world around us capture construction crews, planes, townhouses and more, these kits draw from the world’s wide array of iconic buildings, and are meant to “celebrate the past, present and future of architecture.” Now after launching 36 more sets over the 8 year period, LEGO has added one of Paris’ most famous structures to the collection for fans to build, the Arc De Triomphe.

The LEGO Arc De Triomphe revolves around a 18 x 12-stud or 5 x 4-inch base plate that dons a printed nameplate of the building. It stacks up to just about 5-inches tall at its highest point, thanks to the set’s 386 included pieces. Coming in at $40, the cost per part is on par with what you’d expect from other Architecture models. The 17th century monument is definitely on the smaller side compared to some of the larger builds populating the architecture collection, with the Eiffel Tower towering over it at 12-inches tall. But that doesn’t mean you should let its size fool you, as the brick-built Arc De Triomphe is just as detailed-oritneted as you’d expect.

With a higher detail-density than other sets, the Arc De Triomphe packs much of its intricacies into the upper portion of the build. You’ll find that a majority of the kit’s pieces are white, but there are some nicely placed tans and grays which really pop out amongst the uniform facade. And while the set doesn’t necessarily vary in color like the Louvre does, the Arc De Triomphe is filled with a variety of LEGO elements.

Among the sloped bricks that make up the arch itself, you’ll also find 4 micro figures adorning the imposts, alongside a variety of tiny accent pieces to fill out the Arc’s detailing. The combination of round and angular pieces utilized in the section above the arch yields a very satisfying look which is only further highlighted by the white elements above and below.

Recreating the famous French monument was a fairly straightforward process, but that doesn’t take away from its overall enjoyment by any means. With the Arc being a mostly symmetrical model, it means that there’s a decent amount of repetition throughout the build. This aspect isn’t meant to be negative, as the Arc De Triomphe employs a few interesting techniques that makes its assembly shine. Piecing together the Arc took around an hour and was on the easier side to complete. 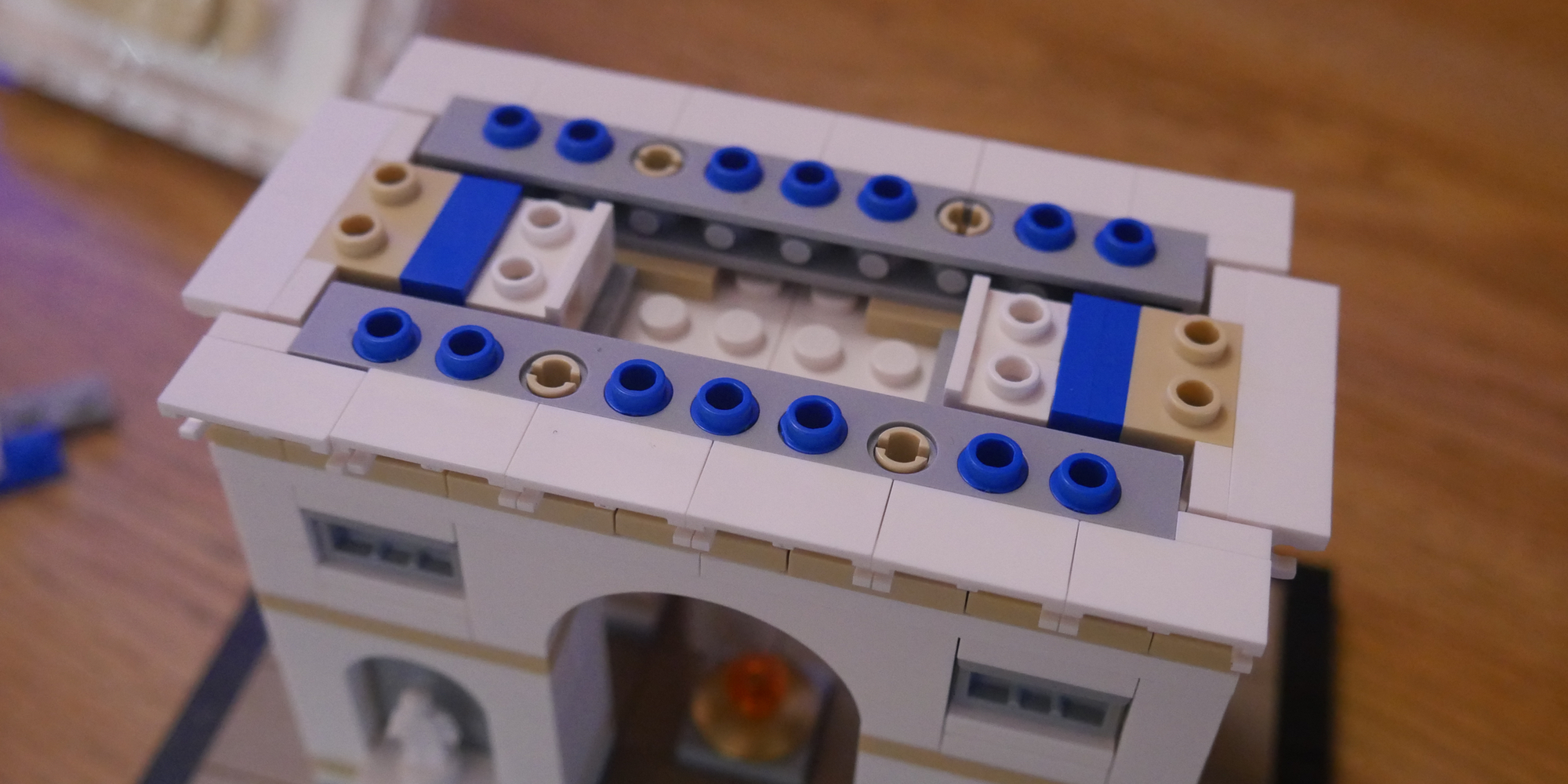 The verdict? Coming in at $39.99, the Arc De Triomphe is a fantastic kit that’s another great addition to the Architecture lineup. All-in-all the set was a joy to build and the completed model stacks up to be one of the cooler kits in my collection. Its smaller base size means it will more easily find a home around your study or on your desk. If you’re a fan of French history or are just looking for a new kit to piece together, the Arc De Triomphe is worth your time.