In what seems like another day, another new promotion, Amazon is today unveiling a subscription service aimed at kids (or parents) looking to increase their reading library. While currently in beta, this book box service is a departure from Amazon’s latest digital offerings with eyes on returning to its roots.

The new $23 subscription plan is the first of its kind at Amazon, which arrived on the e-commerce scene years ago as a bookstore. Over the years, its empire has expanded to cover nearly every category with new initiatives popping up daily. The question is, with physical books quickly becoming a thing of the past, what will consumers’ response be like in 2018?

Called the Prime Book Box, a new TechCrunch report states that it will be available in one, two or three-month subscriptions. The entire operation is based around Amazon’s in-house editors, who are planning to curate its offerings on a month-by-month basis.

Where Prime Book Box goes to the next level is its use of data from previous Amazon purchases. After selecting an age range, and various interests, Amazon will then cross-reference the account holder’s purchase history for child-focused purchases. It will then choose books generally popular with those interests and deliver them to your doorstep each month.

Story time just got better with Prime Book Box, a subscription that delivers hand-picked children’s books every 1, 2, or 3 months. Discover new favorites that inspire a love of reading—new adventures await in every box! 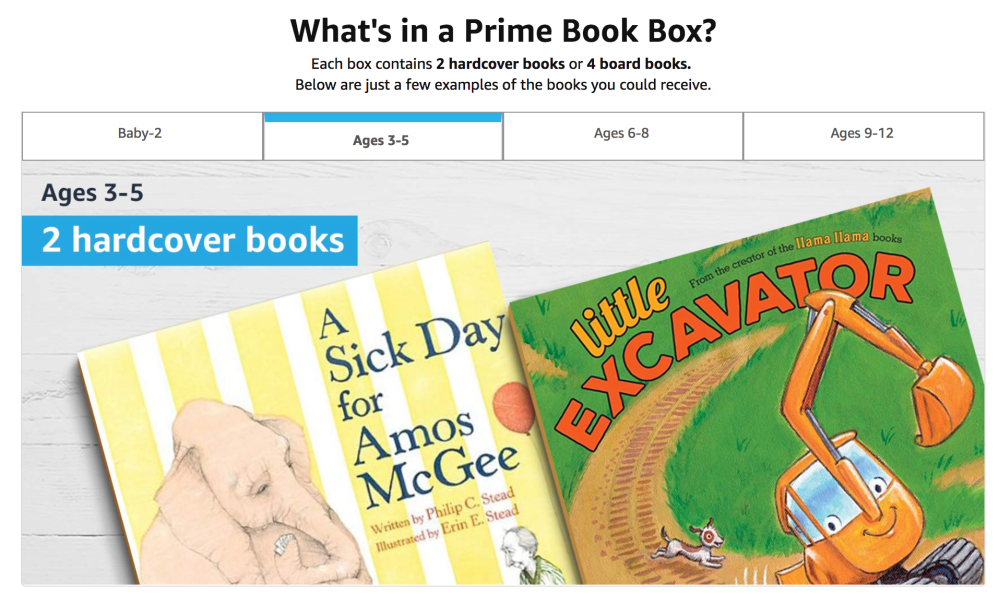 Now, some folks aren’t comfortable with subscription boxes for the unknown aspect of receiving someone else’s choices each month. Amazon remedies those fears in a few ways. First, prior to the box being shipped out, an email will arrive detailing which titles have been chosen. If you’re not happy with the selection, you can swap a few titles out.

One of the most noted benefits of Prime Book Box is the savings for subscribers. Amazon estimates that it will be taking around 35% off the regular list price. Of course, that’s up for debate depending on the month and what numbers Amazon is comparing to.

Like most of Amazon’s new offerings, data is at the forefront of this decision. It’s another entry-point to consumer purchase histories and a way for Amazon to dig deeper into how and what shoppers are interested in.

If you’re familiar with any of the recent Amazon initiatives, you likely correctly guessed that Prime Book Box will only be available on an invite-basis initially. Typically this model includes a six-month period of testing before being offered to the general public.

Learn more
You’re reading 9to5Toys — experts digging up all the latest technology and lifestyle deals, day after day. Be sure to check out our homepage for all the latest news, and follow 9to5Toys on Twitter, Facebook, and LinkedIn to stay in the loop. Don’t know where to start? Check out the best Apple deals, our daily podcast, and subscribe to our YouTube channel