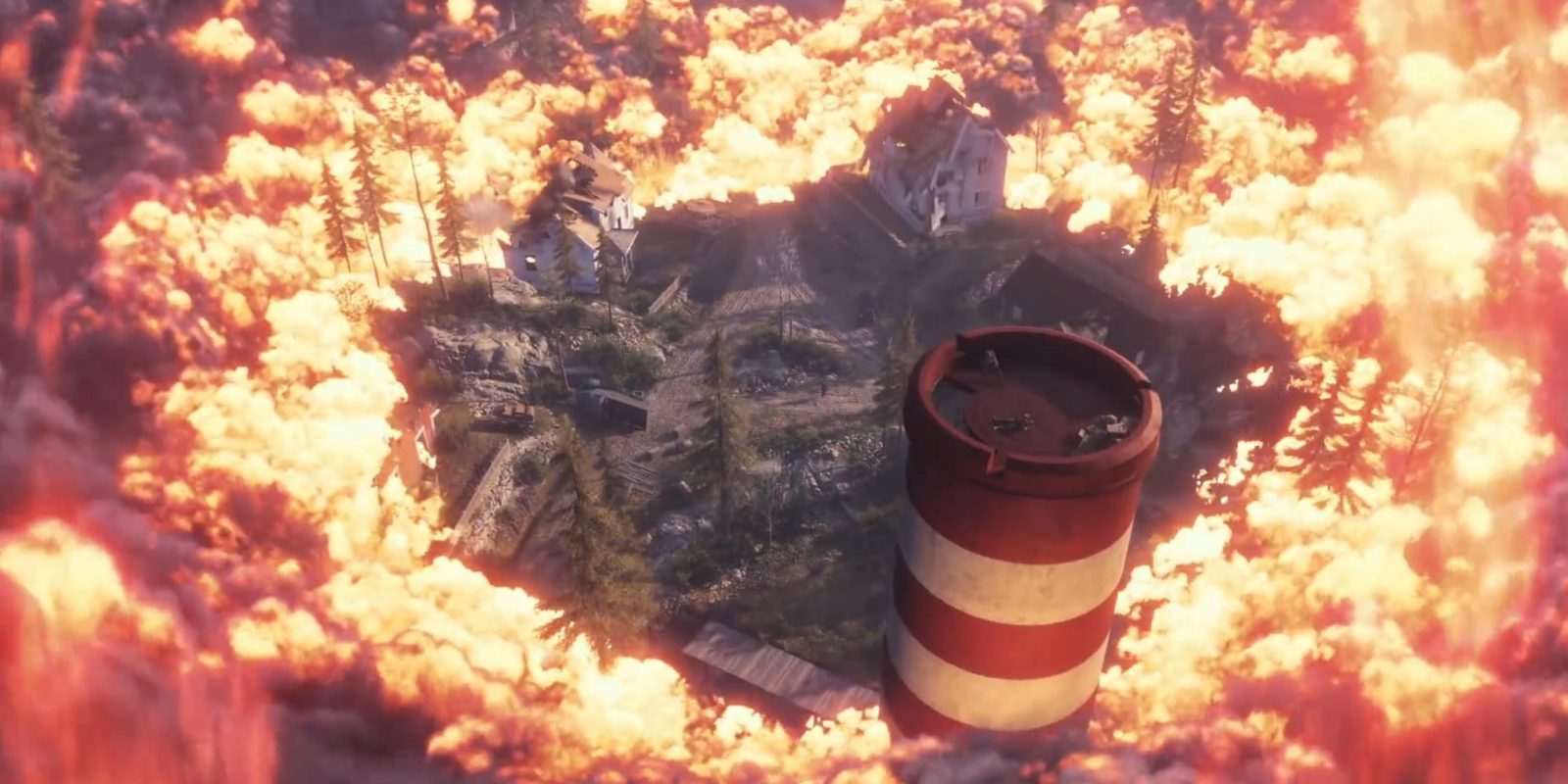 Back in May, Battlefield V was officially announced as the next iteration of the popular franchise, this time around taking gamers on a journey through World War II. In the time since, it’s been a wild ride of teases and last week’s news that this year’s release would be delayed until late November. Despite all the bumps in the road, Battlefield has released a new trailer this morning that provides its most in-depth look to date. This includes more details on its upcoming squad-based battle royale mode: Firestorm. Head below for a full look at the six-minute trailer and details on how you can join the open beta later this week.

Battlefield V is set to be one of the series’ more intriguing releases in recent years. After Hardline and Battlefield 1 were plagued by various hiccups and an overall lack of interest, the revisit to World War II hopes to reinvigorate a fan base that’s been clamoring for new gameplay while staying true to what made the series so popular to begin with.

Today’s trailer is highlighted by our first in-depth look at Battlefield’s first battle royale mode, dubbed ‘Firestorm’. Keeping with its popular squad-based gameplay, there will be 64 players total divided across 16 four-person squads. There will be a number of familiar features as seen in previous releases but it will differ from traditional Conquest gameplay with what Battlefield is teasing as its “largest map ever.” Its Firestorm name hints a literal ring of fire that will shrink as gameplay advances, creating a similar effect that’s been made popular in Fortnite and PUBG.

As with other Battlefield modes, there will be the usual selection of vehicles and destruction-focused gameplay. Details are still emerging on how battle royale gameplay will shake out, but it’s fun to see an iconic series take on this popular trend in gaming.

If you’re interested in demoing Battlefield V, the open beta is now available to those that pre-ordered the game. It’s slated to be available for all starting on Thursday, September 6th. The open beta is scheduled to run through September 11th, closing at 10PM EST. More details here.

You can pre-order the latest Battlefield title over at Amazon for $59.99 where it’s currently the #1 best-selling Xbox game. Those with a Prime membership can score an added $10 credit.

OPEN BETA AVAILABLE FOR EVERYONE September 6, 1 am PT (10 am CEST)

Why are We Doing an Open Beta? Similar to what we’ve been doing in the two Closed Alphas, the Battlefield V Open Beta lets us test Battlefield V running in a live environment with a high player count. We’re testing technical aspects like server stability, latency levels, and matchmaking as well as gameplay – weapon balancing, progression, and other ingredients that we want to optimize to make the game as fun as possible. It’s also an opportunity to collect feedback from participating players. Give us your comments and feedback on the Open Beta on the Battlefield Forums. If you experience Open Beta issues, head to Answers HQ.

The Maps You’ll Be Fighting On – and The Game Modes You’ll Tackle The snowy Norwegian landscapes of the Arctic Fjord map return from our recent Closed Alphas, and here you’ll be able to play both Conquest and two “days” of the Grand OperationFall of Norway. Those are in-game days, by the way – not the 24-hour kind. Grand Operations contain several of these days, with one game mode featured in each.

In Fall of Norway, Day 1 will be spent in the Airborne mode, where you’ll paradrop down to the battlefield and be on either side of a fight where explosives are deployed on control points. Day 2 features Breakthrough, where your team either attacks or defends vital sectors. In this mode, stay aggressive and tactical as an attacker – or use on-the-fly planning to keep the enemy at bay when defending.

Then there’s new scenery to explore: Rotterdam. You’ll fight in the streets of the Dutch city in its pristine, pre-war state before battles left it in devastation. Deploy on this map and try the signature Battlefield game mode: Conquest. Returning to classic rules, Conquest is a 64-player fight where two teams fight for control over key flags on the map. Hold the majority of these points to drain the opposition’s score and win the day.

The Vehicles and Reinforcements Five iconic WW2 tanks and seven aircraft will be at your disposal in the Battlefield V Open Beta. Deploy as a Tanker and bring the big guns to the fight – including the Valentine Mk VIII, Churchill Mk VII, Churchill Gun Carrier, Panzer IV, and the Tiger I. If you prefer soaring through the skies, support your team from above in the Spitfire Mk VA, Spitfire Mk VB, Blenheim Mk IF, Bf 109 G-2, Ju 87 Stuka B-2, Ju 87 Stuka B-1, and the C47.

In addition to this, you’ll be able to fend off flying foes with stationary and towable AA Guns. Tanks giving you trouble? Use the Anti-Tank Guns, also stationary or towable.

A Squad Leader who’s collected enough Squad Points will get the thrilling opportunity to unleash the powerful Reinforcements. If you played any of the Closed Alphas, you’ll recognize the terrifying sight of the two heavy tanks: the British Churchill Crocodile and the German Sturmtiger.

Also returning from the Alphas are the JB-2 and V-1 Rocket Strikes that will send enemies flying. New this time around are the Supply Canister Drops. These are sources of health and ammunition, para-dropped in the battlefield at the cost of 7,500 requisition points.

The Classes and Combat Roles The four main classes are available in the Battlefield V Open Beta: Assault, Recon, Medic, and Support. Each class will have several Combat Roles in Battlefield V, and in the Open Beta, you’ll get to try one for each Class.

Every Combat Role comes with unique traits. If you, for instance, play as Recon, its Sniper Combat Role will grant you the Tactical Retreat trait, meaning you’ll sprint faster in critical health states. The Field Medic Combat Role comes with a Syringe Revive trait, which allows you to revive all team mates (not only those in your squad) with your Syringe.

The Weapons Picking a Class in the Open Beta also means – to some extent – picking a weapon type. The Support Class wields the powerful Light Machine Guns, such as KE7, Bren Gun, and FG-42 – but also the M30 Drilling Shotgun. Medic players can play the objective with the sub-machineguns STEN, Suomi KP/31, MP40, and EMP.

If you’re in the heat of the battle with the Assault Class, use Semi-Automatic weapons like the Turner SMLE, M1A1 Carbine, and Gewehr 43, or the StG 44 Assault Rifle. If you’re further from battle with the Recon, rack up headshots with the Bolt-Action Rifles – here you can choose between the Lee-Enfield No. 4 Mk I, ZH-29, or the Kar98k.

Add sidearms, melee weapons, grenades, and gadgets to this and you’ll have a powerful, versatile arsenal to try out in your Open Beta fights.

You will take part in the Shock Troops Chapter Event, and by completing its challenges during the Open Beta (but before September 9) you can earn the unique Tides of War Beta Dog Tag. The Dog Tag will be awarded in Battlefield V if you decide to get the game. Note that the Shock Troops Chapter Event will only be part of the Open Beta, not the final game.

You should know that the Shock Troops Chapter Event is just a small taste of Tides of War – much, much more is coming. Make sure to give us your feedback on how the flow of playing these challenges feels like.

System Requirements Xbox One players will need an internet connection and an Xbox Live Gold account to play the Battlefield V Open Beta. For PlayStation 4, all owners connected to the internet can get in on the action. If you’ll be playing on PC, you’ll want to know if your hardware is up to snuff. Minimum and recommended specs are below. Note that these are unique to the Open Beta, not necessarily to the final game of Battlefield V.