WD announces the Black SN750 NVMe PCIe M.2 SSD with read speeds of up to 3.4GB/s 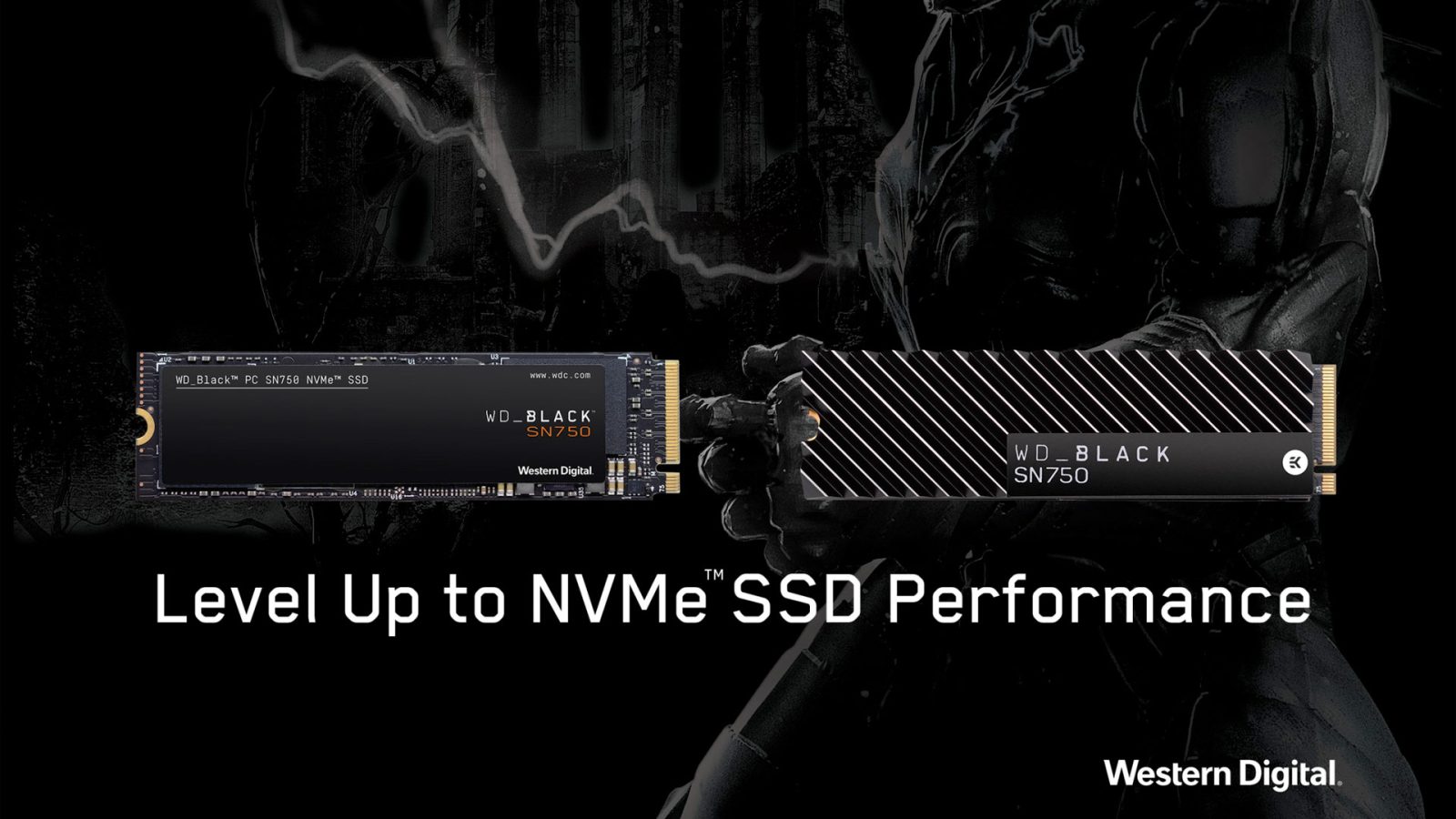 NVMe SSDs have really upped the game when it comes to read and write speeds. What once was only a pipe dream is now a common reality. Apple uses PCIe SSDs in their Mac lineup, and NVMe is the closest non-Apple users can get to it. Last year, WD announced its Black lineup of NVMe SSD, but now the company is updating the line with the SN750.

These NVMe SSDs feature an all-new design and a more sleek look. Plus, you can even get the SN750 NVMe SSD with an optional heatsink to give passive cooling, allowing you to maintain optimal levels of performance.

The SN750 NVMe SSD brings top-tier performance to your computer. These drives are marketed toward gamers and professionals who need the highest level of speed and reliability when building or customizing a computer. PCIe-based SSDs offer increased bandwidth capacity over the traditional SATA interface, boasting up to 32Gbps of potential speed compared to SATA’s measly 6Gbps.

NVMe SSDs are also quite a bit smaller than their SATA counterparts, allowing for a sleeker build. The one major drawback to NVMe, until recently, was the heat generated. We all know that excessive heat isn’t good for technology, and that’s why the SN750 line of NVMe SSDs from WD feature an optional heatsink to offer passive cooling for your storage drive.

The pricing will start at $79.99 for the 250GB model and goes up to $499.99 for the 2TB model. Availability is scheduled for spring 2019, which is just around the corner. I love my WD Black NVMe SSD that I have in my custom desktop right now, it’s the perfect blend of affordability and performance, and the new SN750 SSDs will take that even further.

SAN JOSE, Calif. and SAN ANTONIO (PAX Booth #10683) – Jan. 18, 2019 –Western Digital Corp. (NASDAQ: WDC) today introduced its second-generation, high-performance WD Black® SN750 NVMe™ SSD with up to 2TB capacity on a single-sided M.2 form factor, and will be showcasing a version for desktop systems or custom-built gaming rigs, which has an integrated heatsink that helps maintain speed and temperature. This enhanced drive enables gamers and hardware enthusiasts to snag a tangible, next-level competitive boost during intense PC gameplay. Advancements in PC and graphics technologies are taking PC gaming to new heights. To take advantage of the increasingly immersive and responsive in-game experiences, gamers must navigate several challenges, including higher performance demands and large file sizes, with some games approaching file sizes exceeding 100GB. Top-level transfer speeds give users near-instant access to their games and files, getting them back into game action more quickly and boosting the system’s overall responsiveness. To support very fast read and write data speeds, traditional NVMe SSDs are designed to throttle performance in order to keep the drive’s operating temperature within acceptable parameters. In collaboration with EKWB, a leader in PC cooling technology, the WD Black SN750 NVMe SSD will offer an option for a sleek EKWB-designed heatsink for capacities ranging from 500GB to 2TB, with estimated availability in Spring 2019. The heatsink dissipates heat from the drive during intense operation, allowing the SSD to run for longer periods of sustained read and write performance, compared with non-heatsink versions. Western Digital also has added a Gaming Mode feature to a WD Black-exclusive SSD Dashboard, allowing users the flexibility to disable low power mode and keep the SSD running at peak levels for longer sustained execution when they want non-stop, consistent high performance. “VR, immersive features and larger game file sizes mean longer load times for levels, maps and other in-game actions. All of these require faster storage and higher capacity,” said Eyal Bek, vice president marketing, data center and client computing, Western Digital. “More intense, longer game play also requires well-managed thermal performance, particularly for high-performance NVMe SSDs. The new WD Black SN750 NVMe SSD delivers unrivaled performance with an architecture designed for gaming, built-in passive cooling and gaming-mode features with heatsink options to be incorporated. We have pushed the boundaries of storage to give hardcore gamers the competitive edge they desire.”

Level Up with the WD Black SN750 NVMe SSD The second-generation NVMe SSD to be built on Western Digital’s own 3D NAND technology, firmware and controller, the WD Black SN750 NVMe SSD features a vertically integrated SSD platform designed to maximize NVMe SSD performance for gaming and hardware enthusiasts looking to build or upgrade their gaming PC or a custom PC. Delivering exceptional sequential read (up to 3,470 MB/s[3] for 500GB and 1TB model) and write performance (up to 3,000MB/s1 for 1TB model), combined with large capacity, the new drive reduces the time required for users to access their programs and files, load games and transfer large games, 4K/8K videos and other data-intensive content. Additionally, the SSD features up to 515,000 random-read and 560,000 random-write IOPs (for 1TB model) for extreme throughput, allowing the SSD to manage multi-threaded applications and data-intensive environments. This enables higher responsiveness when accessing multiple files in various locations to load new levels or games, with less time required to save in-game progress during gameplay.

Pricing and Availability Western Digital will be showcasing the new products at PAX South (Booth #10683) in San Antonio. The WD Black SN750 NVMe SSD offers a five-year limited warranty with up to 600TBW endurance for the 1TB model and up to 1200TBW for the upcoming 2TB model. With a single-sided M.2 2280 form factor, the WD Black SN750 NVMe SSD comes in capacities from 250GB up to 2TB[4] and ranges in price in the United States from $79.99 up to $499.99 MSRP USD, depending on model and capacity, and will be available in select Western Digital retailers, e-tailers, resellers, system integrators, as well as the WD store. Ideal for enthusiasts building custom desktops or gaming rigs, the heatsink version will be available globally in Spring 2019 in select Western Digital retailers, e-tailers, resellers, system integrators and distributors. Enabling the possibilities of data, Western Digital offers the industry’s broadest portfolio of products and solutions to help people capture, preserve, access and transform their content. For more information, visit our website: Western Digital.