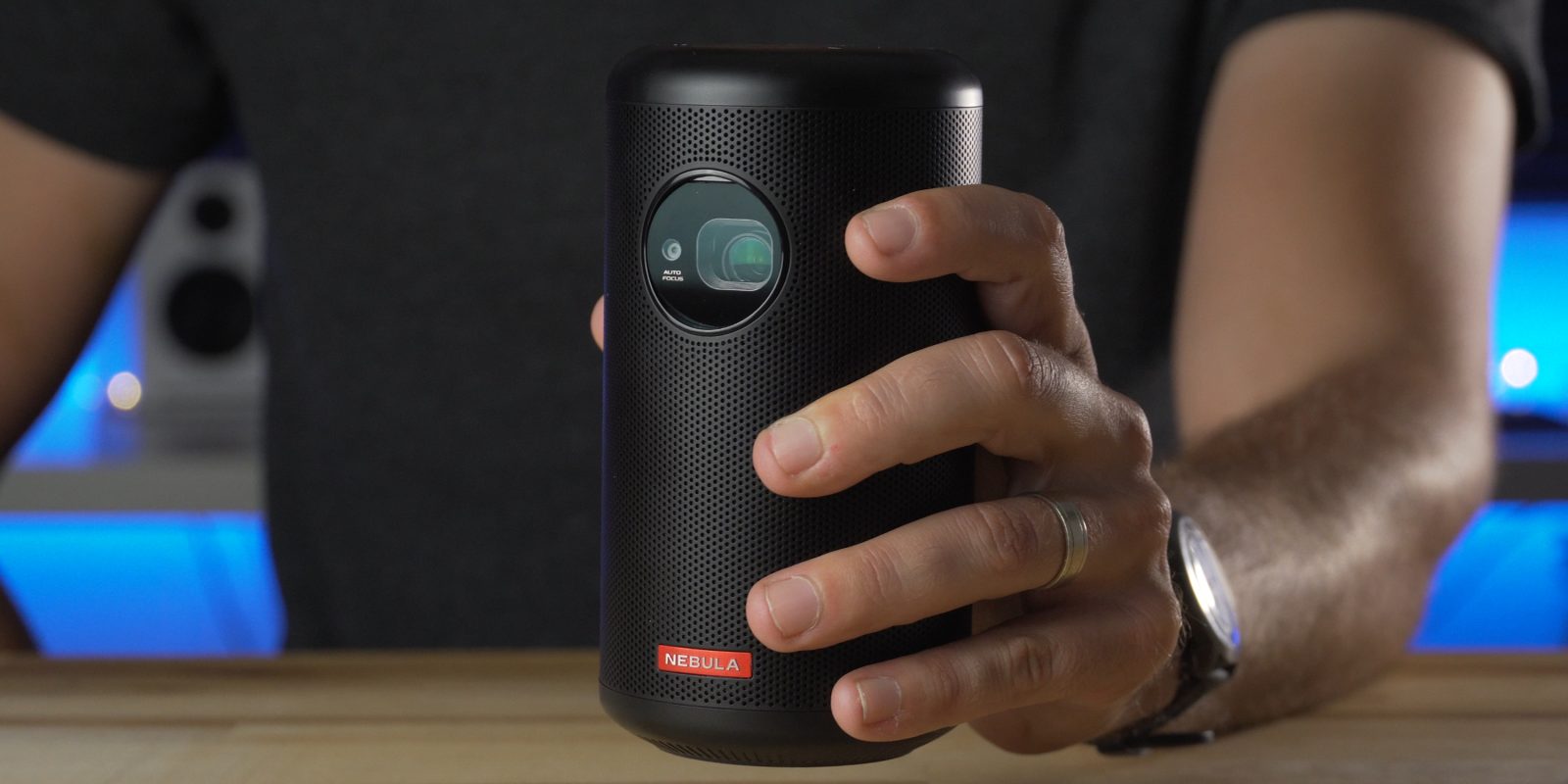 Have you ever found yourself needing a 100-inch smart TV in your pocket? Well, if so, then the Nebula Capsule II from Anker might be just what you’re looking for. At just a little bigger than a standard 12-ounce can, the Capsule II runs Android TV, projects a 720p image up to 100 inches, and will play video for almost 2 hours and 45 minutes before needing a recharge. Check out the video below.

The new Nebula Capsule II from Anker takes a similar design from its predecessor and adds some impressive new features. These new features do come at a cost, though. The Nebula Capsule II is priced at $580, while the older version is almost half that price at $300. So why the price difference? Well, the Capsule II’s higher resolution, 200 ANSI ln brightness and industry leading use of Android TV set it apart from the competition.

Like its older version, design and portability are high on the list of features. Its cylindrical shape can be compared to a standard 12-ounce can, with the Capsule II being just a bit wider and taller. This makes it easy to bring along in a bag for watching movies outdoors or for use during a presentation in a board room.

Within this small cylindrical shape, though, is a fully-functional standalone projector with a built-in 8-watt speaker. HDMI and USB inputs along with a 3.5mm audio out make it able to be amplified by other devices if you want to get more out of it. 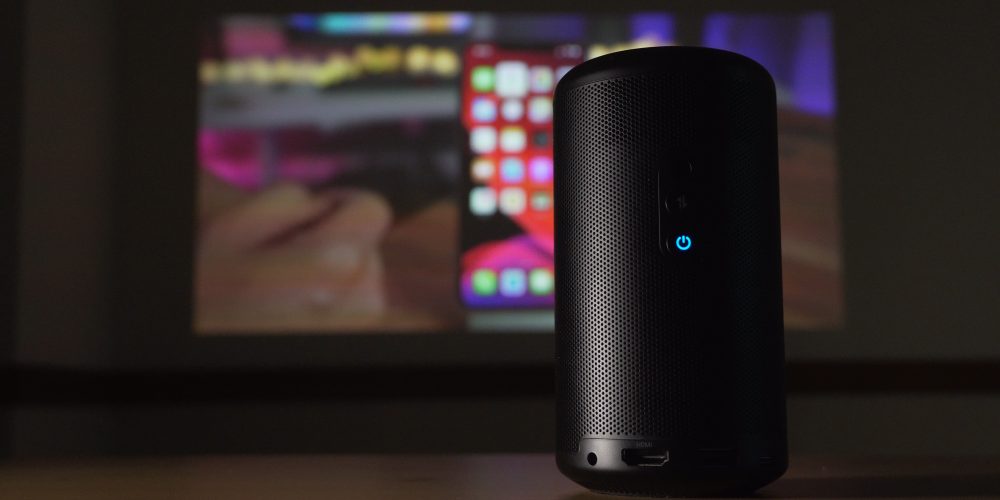 Another distinguishing feature is its use of Android TV. This basically lets the projector, with a Wi-Fi connection, work as a smart TV to install apps, games, and stream content from a wide variety of sources.

There are a few different ways to control the Capsule II since it runs Android TV software. Buttons on top of the unit, the included remote and the Nebula Connect App all enable control of the Capsule II to fit most situations.

While the Capsule II can be placed a minimum of 23 inches or maximum of 121 inches to get a project image from 20-100 inches, the suggested range for best results is placing the projector between 40 and 80 inches away from a surface. Obviously the further the Nebula is from the surface, the fuzzier and darker the image will appear. But, this allows for a nice range of sizes depending on where you are projecting the image. 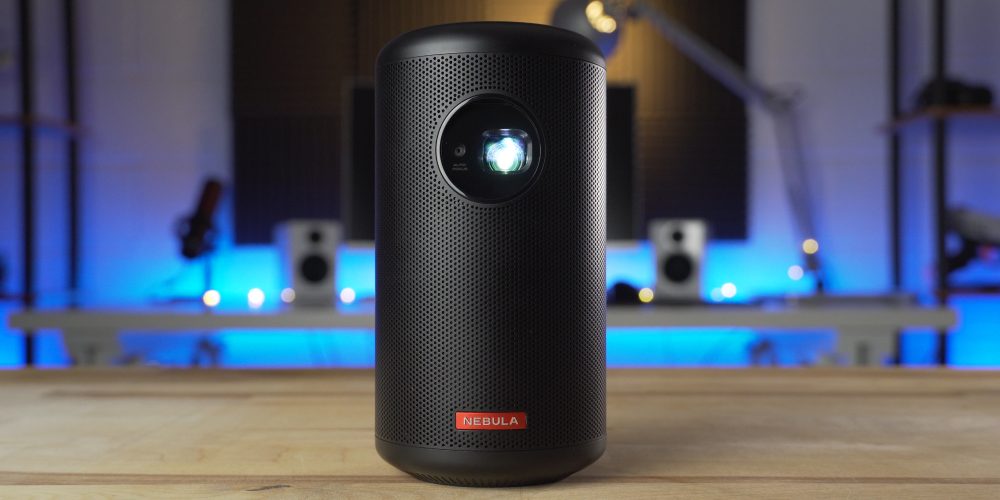 Besides its impressive size and portability, the Capsule II has some great features. Resolution reaches 720 and looks surprisingly sharp. I think part of this sharpness is thanks to the 1-second automatic auto-focus. When the Capsule II is moved, it senses the movement and refocuses the image to the correct distance. This makes setup incredibly simple and (mostly) accurate. There were a few times that I thought it was a bit soft and prompted it to try re-adjusting by holding the HDMI/ATV button for a few seconds.

Projectors are often judged by their brightness. The Capsule II packs 200 ANSI lumens — double what the previous-generation Capsule had. This bulb makes viewing easy in dark rooms or outside. In a room with much light, though, the projector will start to look washed out. For the Capsule II, the darker the room the better.

The image will look best on a flat, white surface. Walls finished with drywall typically work well, or you can pick up a projector screen like this one from Amazon.

Built into the Capsule II is an 8-watt speaker that delivers pretty decent sound, good enough for most casual listening in a small area. This can also double as a Bluetooth speaker if you just want to listen to audio. If you want even more sound, the projector has a 3.5mm output to connect it to a larger stereo. 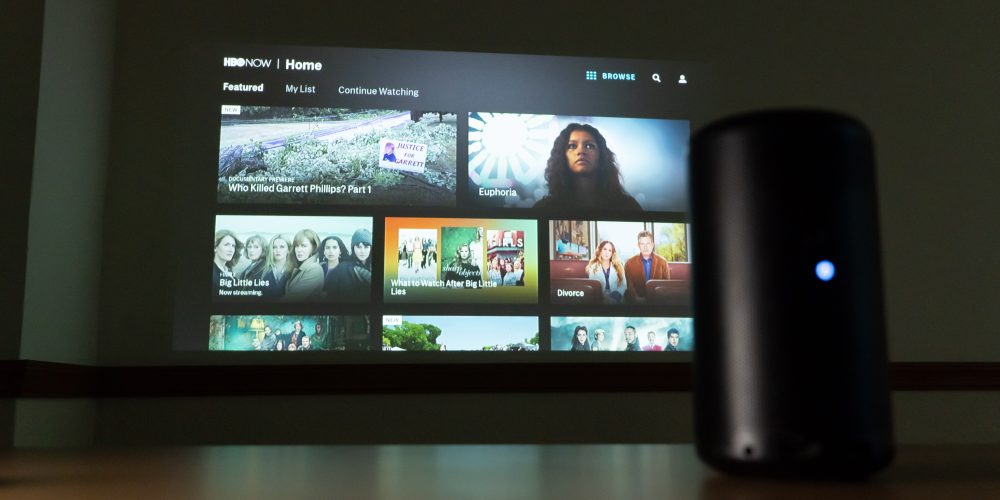 The “smart TV in your pocket” feature comes from the Capsule II’s use of Android TV. This lets you download thousands of apps including many common ones like Hulu, HBO and Twitch. Installation is as simple as signing in to Google Play, searching and downloading. Using the buttons or remote to navigate logins can be annoying, but when you use the Nebula Connect App you can use your phone as a mouse and also the keyboard to make inputs easier.

A real bummer, though, is the lack of Netflix support like the other applications. There is a way to work around this, which is even described on the Capsule’s Amazon listing, but the fact that it is not a native application is definitely a drawback.

In addition to streaming apps, Android TV on the Capsule II also enables the use of Google Assistant. There is a button on the remote that you can hold and speak into the remote to make requests like, “play classical music,” or “show me the latest season of Game of Thrones,” and even control your smart home enabled-devices like dimming the Phillips Hue lights to watch a movie on the Capsule II. 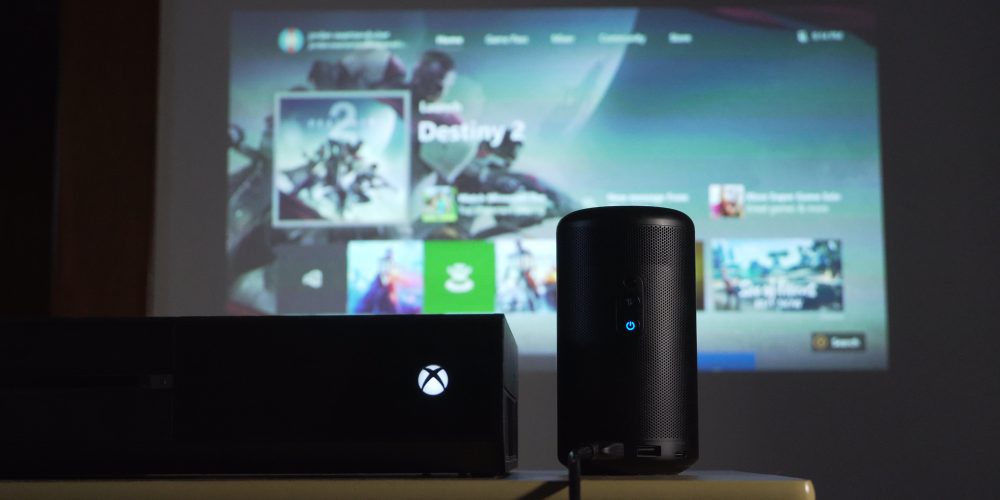 Of course, there are other ways to play video on the Capsule II. The HDMI port allows you to connect computers, media players, or gaming consoles. Additionally, the USB port supports playback from a USB thumbstick after downloading the ES Files Explorer from the Google Play store.

While playing music videos on YouTube, the Capsule II lasted for about 2 hours and 45 minutes before needing a recharge. This makes it pretty capable for viewing most movies without needing a recharge, but binging a series will definitely need some extra power. To get back up to a full charge took me a little over 2 hours.

Overall, the Nebula Capsule II from Anker is an extremely impressive little projector and priced accordingly at $580. The variety of inputs cater to many different locations and uses. The auto-focusing 720p image was plenty sharp and bright in my opinion. Sound quality is okay, but if you find it lacking, there is the ability to output to a 3.5mm connection.