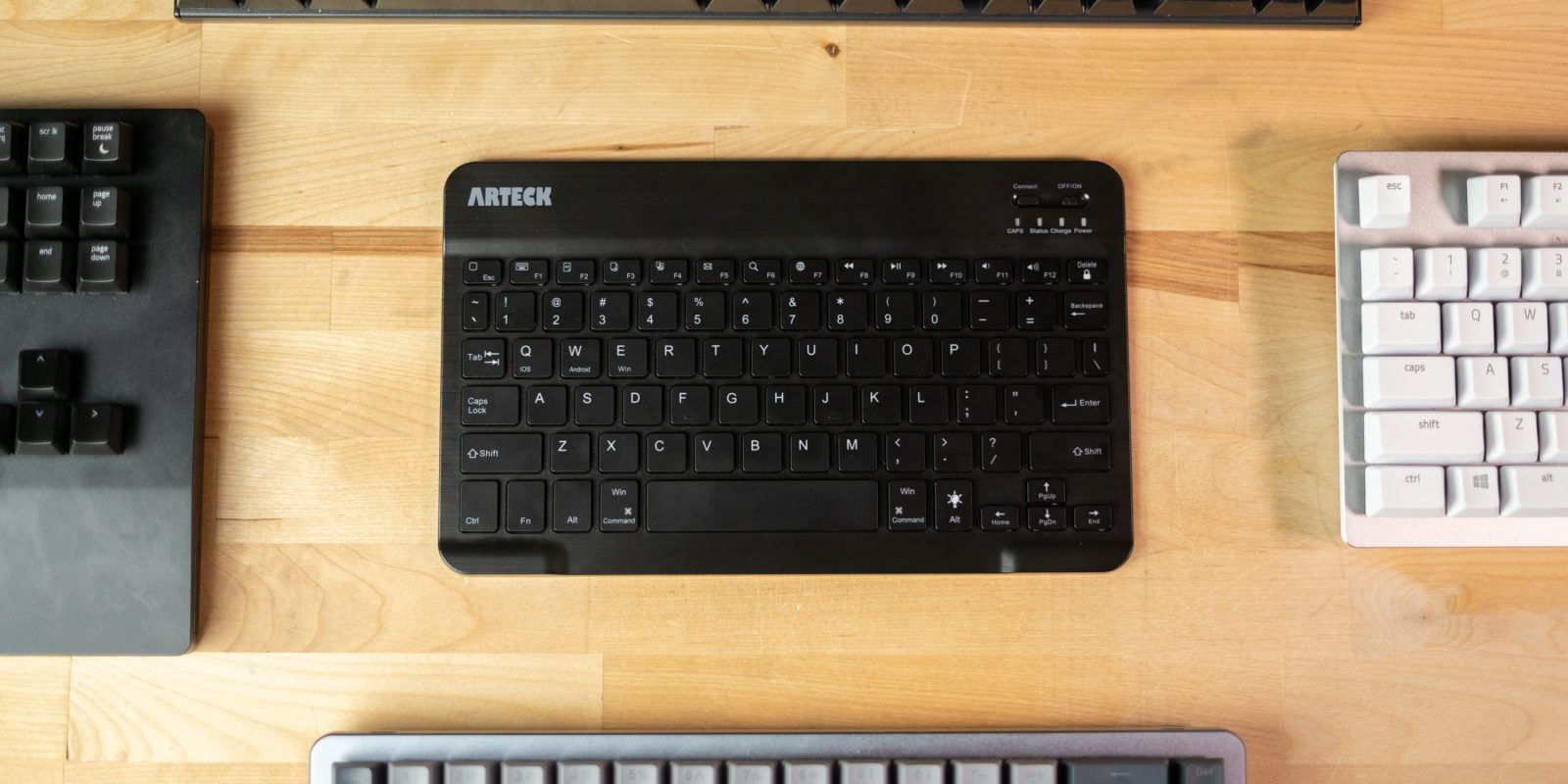 Having a small, portable wireless keyboard can be handy for a few reasons. They’re great to use with tablets, phones, and if you find yourself wanting to work or type from the couch, they can be very convenient. 2nd in Amazon best sellers for keyboards, and Amazon choice for Bluetooth Keyboard, the Arteck HB030B boasts universal compatibility, Bluetooth wireless and backlit keys for just $21. Is it worth it for the price? Head below to watch the video and see this affordable option in action.

The main appeal of this thing is that it is incredibly small and portable. Measuring about 9.75 x 6 x ¼-inches and weighing just 7.6-ounces, it is straightforward to throw in a bag with a tablet or store anywhere in your home for use when you’re not directly in front of a device.

Another feature of the Arteck keyboard is its backlit keys. There are seven different colors to choose from and two levels of intensity, or you can turn off the backlight altogether. These are easily controlled by holding the function key and pressing right Alt, also signified with the light bulb to change brightness, and if you press both of those and even up or down on the arrow keys, the keyboard will cycle through the available colors. 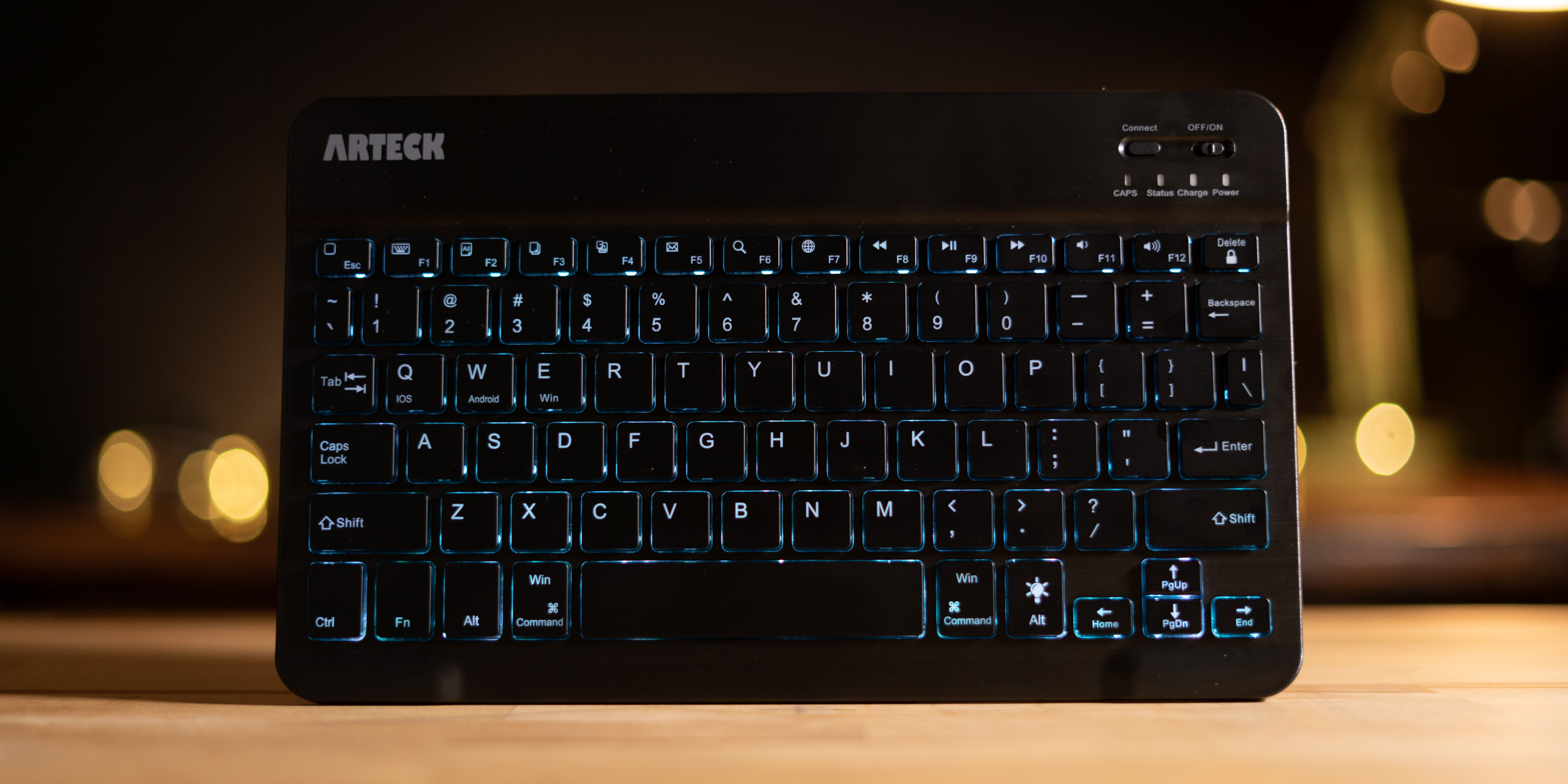 Getting the keyboard connected was very easy in my experience. Just flip the power switch and press the connect button. Then depending on your device, look for a new Bluetooth device, and it should come up as Bluetooth Keyboard or something similar. I tried it on my MacBook Pro, iPhone 8, and Raspberry Pi 4 with Rasbian, and each one connected quickly.

When connected to my iPhone, the Arteck would reconnect when the power was turned off and back on and worked just as expected.

Overall, the Arteck Bluetooth Keyboard feels surprisingly easy to use. It doesn’t have the same feedback as a full-sized mechanical keyboard, of course, but I still found it pretty easy to type on none-the-less. The keys are scaled down a little from standard mechanical keyboards, but it’s close enough that it doesn’t take much to get used to the keyboard. It has all of the F-keys, arrow keys, and some of the extra controls like page up and down and available through the use of the Fn key. 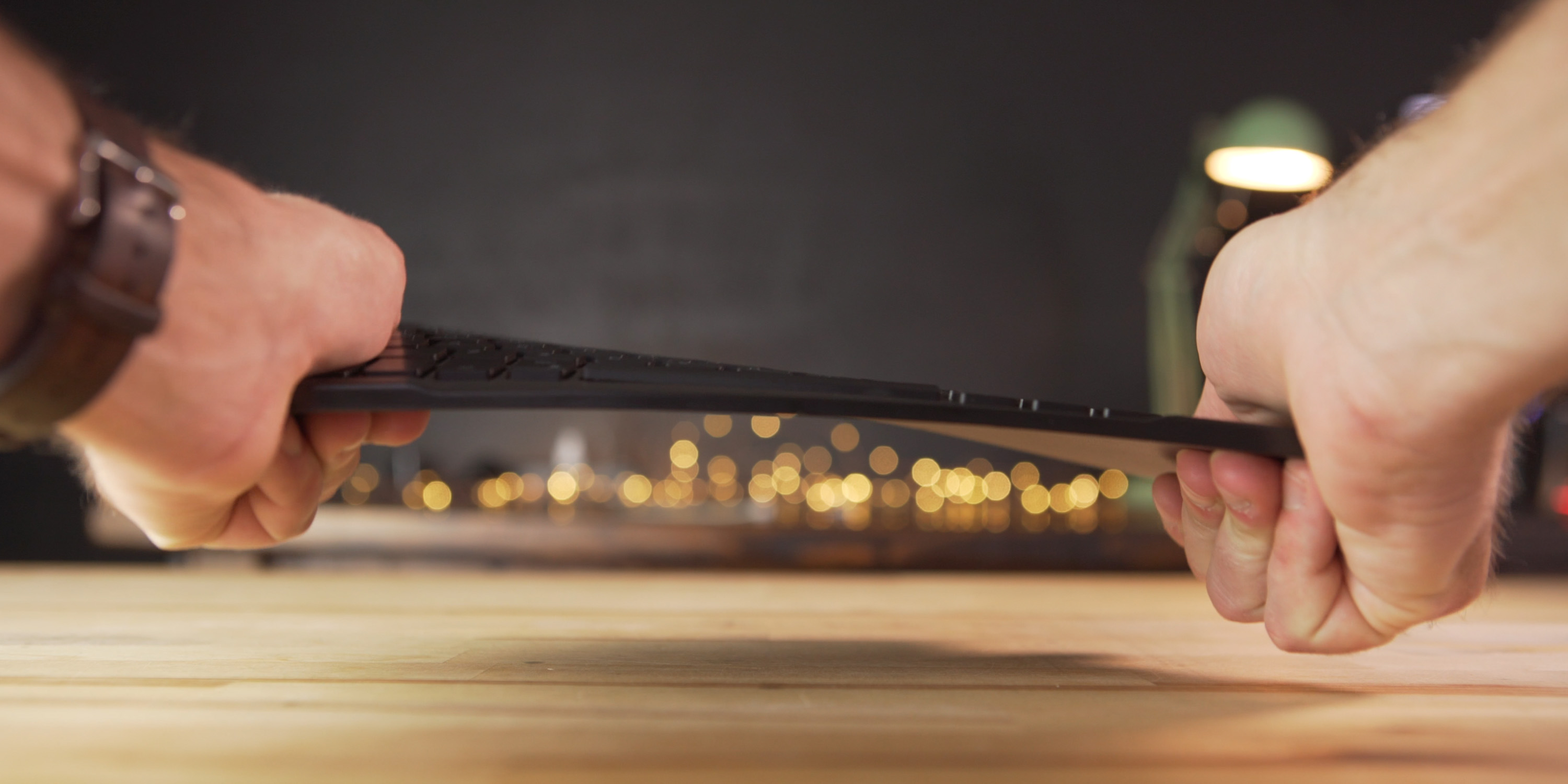 Since it is built out of mainly plastic, it is very flexible. It doesn’t feel like it is going to break, but if you are using the keyboard on an unlevel surface, there is going to be some flex, which might make typing a little harder.

One other thing to note is that the back of the keyboard is entirely hard plastic. So when placed on another hard surface, it tends to slide around a little bit. 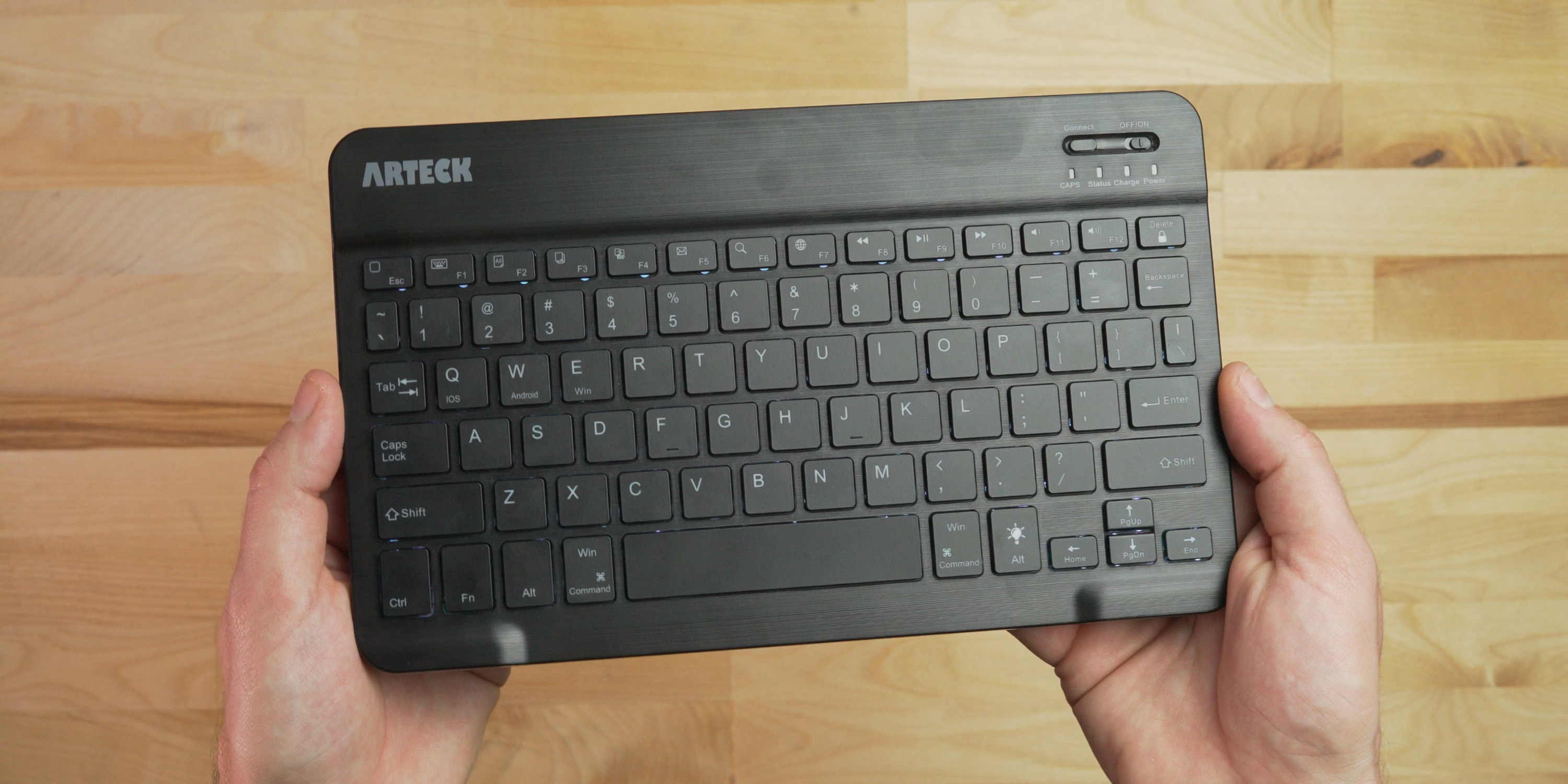 With the internal rechargeable battery, Anteck claims 6-months of use. Then, later on, says that’s based on two hours of use a day with the backlit keys turned off. So actually lifetime will likely be smaller than that. Though, that depends entirely on what you are using the keyboard for. If it’s for just casual use on the couch, it might last that long. But if you’re running it as a daily driver with multiple hours of work, then it’ll need a recharge much more frequently.

Another reason I wanted to try this keyboard was to see how it worked with the Raspberry Pi 4 Retro gaming build we did recently – and it’s pretty much perfect. Since it’s similar to a standard size and layout, it doesn’t take much to get used to it on the Pi. It’s incredibly easy to set up when using Raspbian, which we did on our build. Just like on a computer or iOS device, power on the keyboard and hit connect. In Rasbian, select the Bluetooth icon in the upper right and choose the Bluetooth Keyboard. 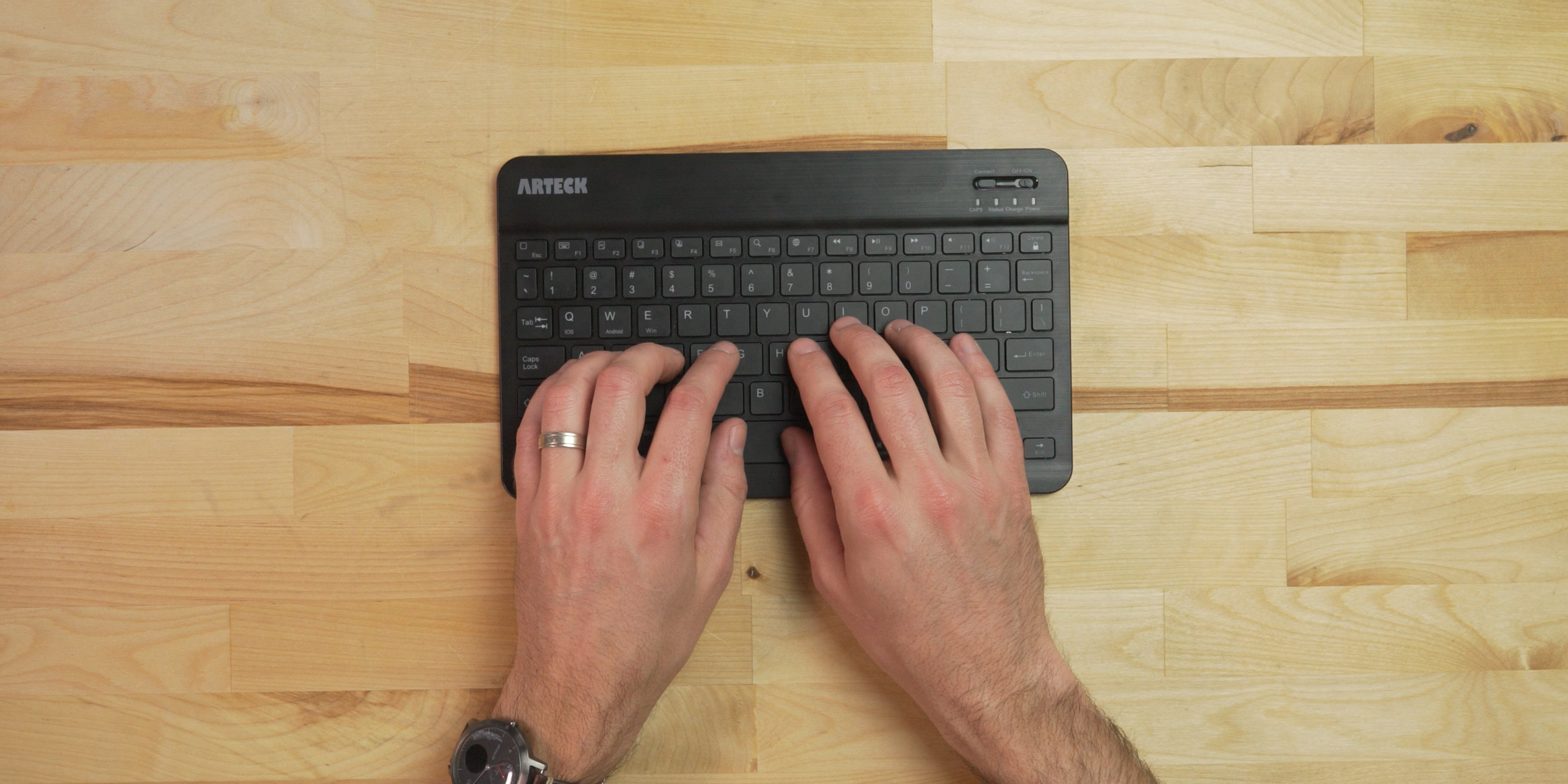 Overall, I’ve been pleased with the performance of the Arteck Bluetooth Keyboard for the price. It’s tough to beat for $21. Of course, it’ll never be a replacement for a desktop keyboard for me like the Drop ALT or Razer Huntsman Elite I typically use, but I can’t use those from a couch comfortably, and they won’t fit in a bag.