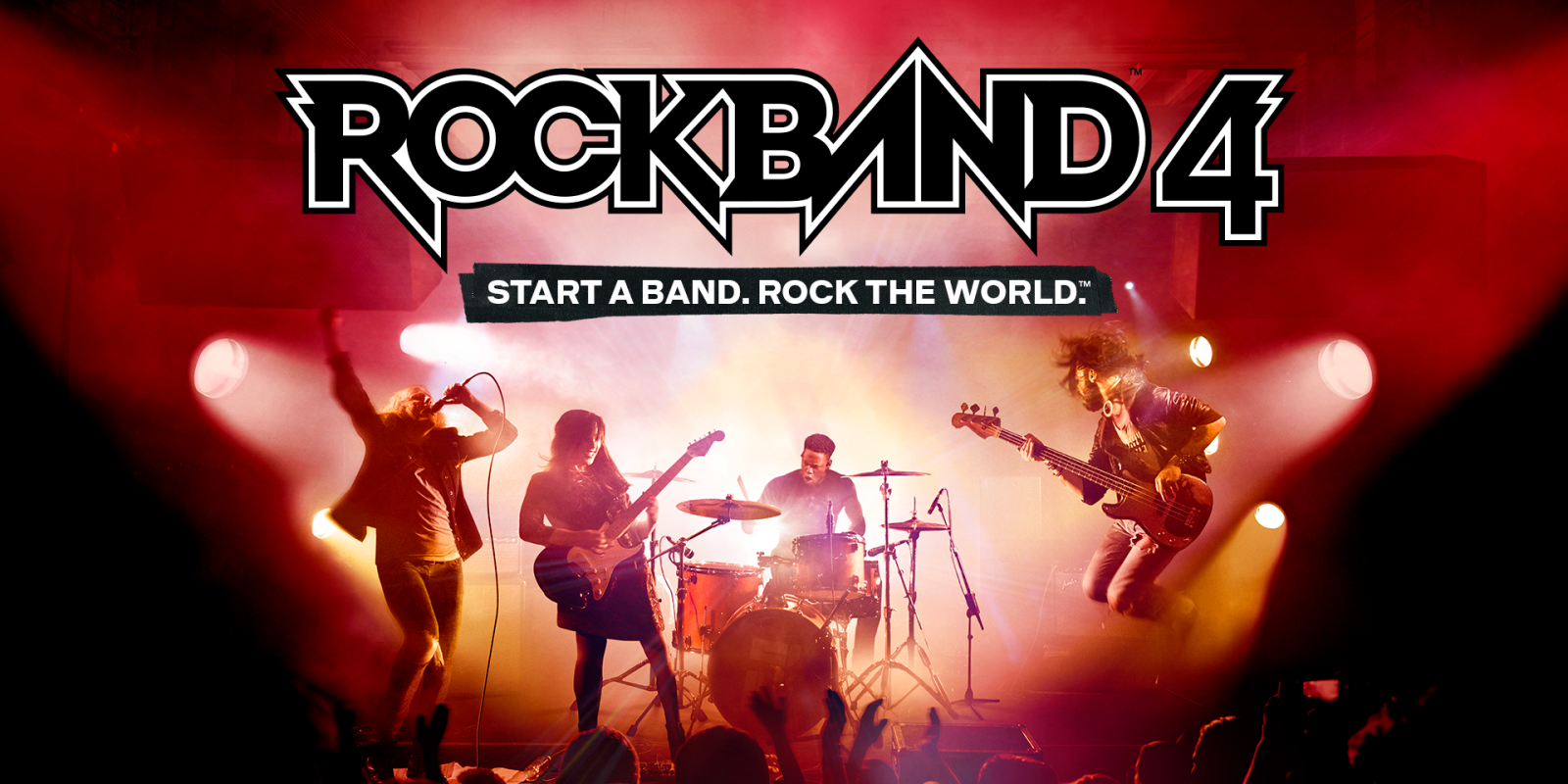 It has been five long years since we’ve had a new Rock Band release from Harmonix. We were thrilled when it was announced back in the winter that the fourth generation of the popular franchise would be making its way to Xbox One and PlayStation 4. Along with that announcement came word of updated accessories, including a Band-in-a-Box bundle from Mad Catz with a Fender Stratocaster-inspired guitar.

So after five years, what does Rock Band 4 have in store for its loyal following? Aside from updated hardware, a new feature allows gamers to add their own “personal signature” on each song with freestyle guitar solos and drum fills. The game is set to ship tomorrow and we’re ready to tell you about our experience rocking out at home. 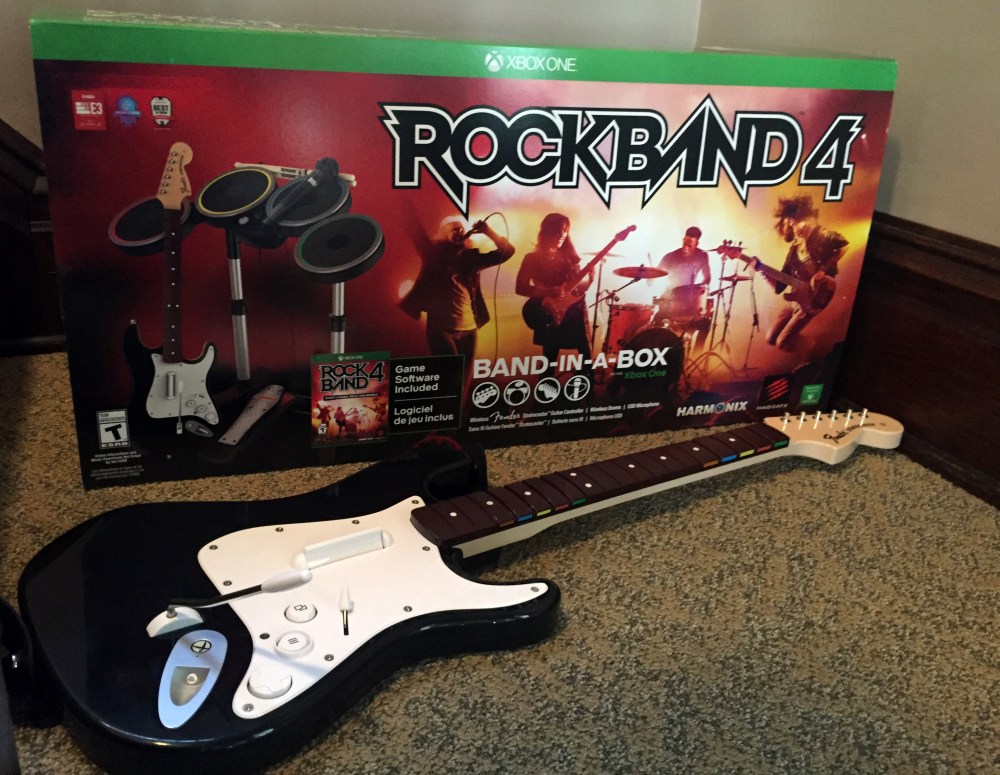 One of the biggest pieces of the Rock Band 4 announcement back in March was the inclusion of a new Band-in-a-Box hardware set from Mad Catz. While this bundle is not required to play the game (more on that later), it’s the preeminent way to enjoy this new release. This bundle goes for $249.99 and includes a copy of Rock Band 4, the new wireless Fender Stratocaster guitar controller and drum kit, plus a refreshed USB microphone.

Right when you open the box, the quality of the materials is evident. I remember some Rock Band and Guitar Hero controllers looking like toys rather than quality gaming equipment, that’s not the case here. The Fender guitar is front-and-center with a classic black and white design. It snaps together fairly easily and includes batteries plus a strap to sling it over your shoulder. 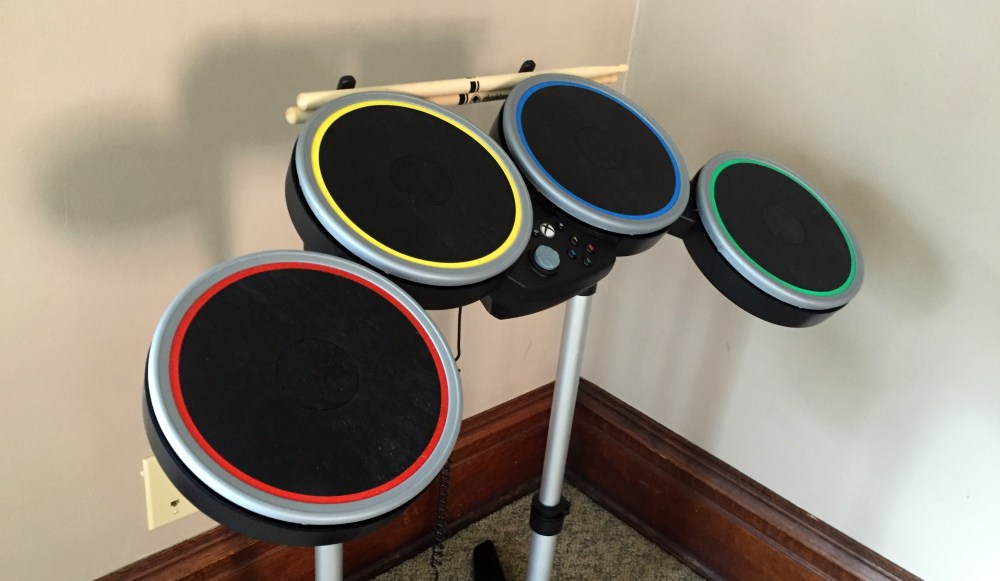 The wireless controller has all of the necessary buttons for your console, Xbox One in my case, to control the game, menus, etc. Pairing the guitar is quick and easy. There are corresponding green, red, yellow, blue and orange buttons found at the top and bottom of the neck. There is also a whammy bar, pickup switch selector and pick guard-mounted controls that have functionality in the game as well.

Mad Catz left the drum kit largely unchanged with a few minor adjustments including a metal-plated kick pedal and increased battery life. The whole setup snaps together fairly quickly and has a height adjustment system for finding that perfect feel while drumming. Controls for your console can be found in the middle of the kit for song selection and navigating menus. Two wooden drumsticks are included with the set as well as batteries. Like previous generations, there is compatibility for add-on cymbals if you’re ready to go all-in on the drum kit. 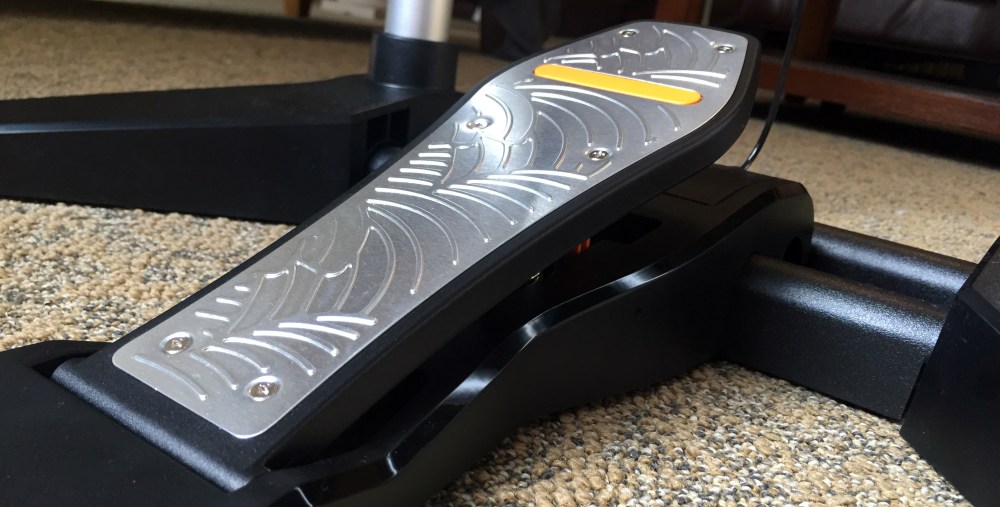 If you’re not interested in committing $250 to Rock Band 4, there are other options available. Mad Catz also offers a Wireless Guitar Bundle for Xbox One or PlayStation 4 that includes the Fender Stratocaster guitar and a copy of the game. At $129.99, it provides a more reasonable entry point to the Rock Band franchise. 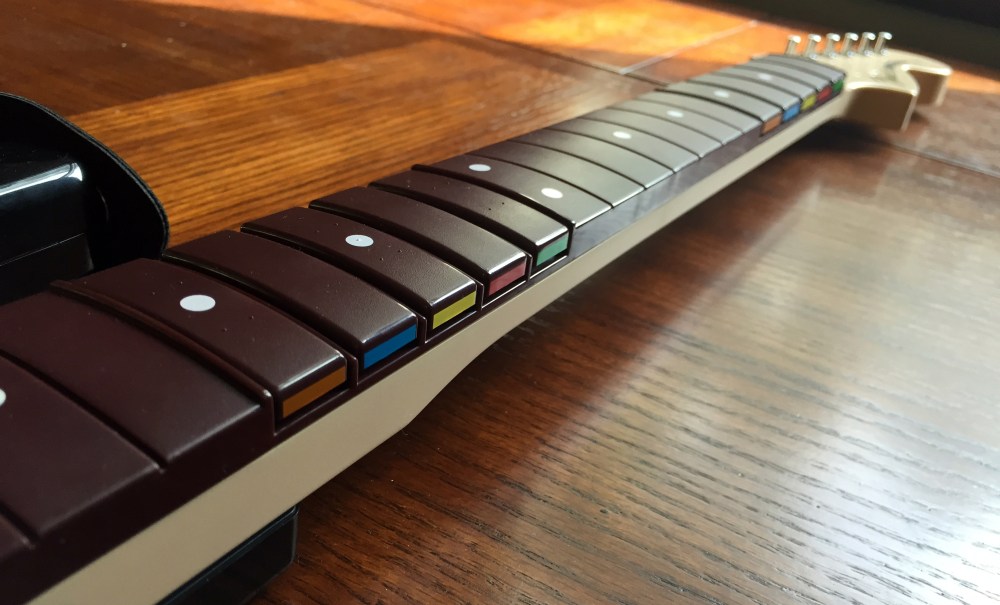 If you already have hardware from previous generation titles, there are other options as well. PlayStation gamers can pick up the title for the standard $59.99 while utilizing the older guitars and drum kit. However, it’s a little more complicated for Xbox One users. Mad Catz has a bundle for $79.99 that includes the game and a wireless adapter that supports legacy Rock Band guitars and drums. Plug the USB adapter into your console and then your older gear should pair up.

Rock Band 4 ships with 60 tracks. Additionally, there are over 1,500 songs that are available for download via the Rock Band Music Store. The big news here: any previously purchased tracks from older titles can be imported into the game at no additional cost. Rock Band’s base track list is a mix of classic artists and modern day bands. Some highlights include U2, Aerosmith, Mumford & Sons, Gary Clark Jr., Jack White and Elvis Presley. Harmonix claims that it will be regularly updating the game with new music and gameplay modes regularly, at no additional cost. The entire list of songs can be seen here. 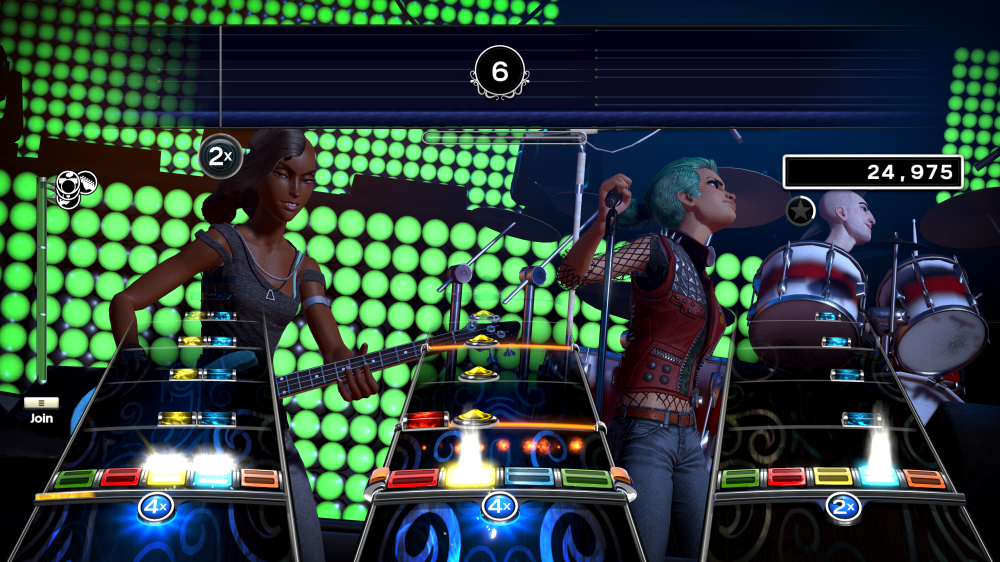 There are three game modes available when you arrive at the main menu: play a show, go on tour, and quickplay. The first mode allows you craft a setlist of songs to play on-the-fly and allows band members to vote on songs throughout the show. There are two options here for song selections, you can either choose as a group or allow the game to pick based on random characteristics like “play a song from 2001″ or ” female vocalists”.

Going out on tour is Rock Band’s version of a campaign mode, you build a band up from a group playing local shows to the biggest stages in the world. All along earning money, more street cred and fans until you reach the top. This new mode lets multiple players enjoy the game together or individually. It’s fun to create your own band and design what each member looks like. 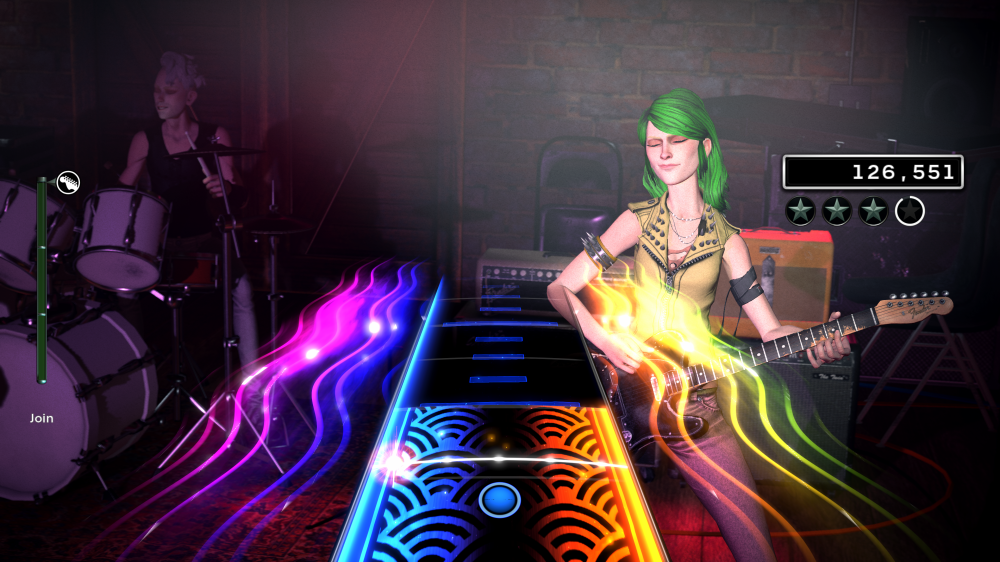 My favorite mode is quickplay. It’s the fastest way to enjoy the game and offers the most flexibility. You’re able to select any of the tracks on the game, choose your difficult level and get playing very quickly. It takes less than two minutes from the time the console is powered up until the first note is played. With so many games having long and drawn out intros (looking at you Madden), it’s refreshing to sit down and get to business quickly.

There are four different levels of difficulty on each song, which is nice given the equipment can be intimidating to some first time players. One of my favorite additions to the game is the freestyle guitar solos that allows players to create their own sound and break free from the song. It’s an enjoyable and challenging experience to try to put together a cool string of notes and adds a lot more mileage to the game for experienced musicians. It’s additions like this that really make the game stand out from the previous generation.

After five long years, it sure is good to have Rock Band back in our lives. This franchise remains to be one of our favorite options for console gaming in larger groups or as an individual. It’s a great party game across many age groups and ability levels, but is also fun to pick up on your own. Even more, the ability to transfer all of your in-game purchases makes this a no-brainer for long time Rock Band gamers. If you’re looking for a fun activity or just an alternative to first-person shooters or sports titles, we highly recommend grabbing Rock Band 4 during the holiday season for some family fun.