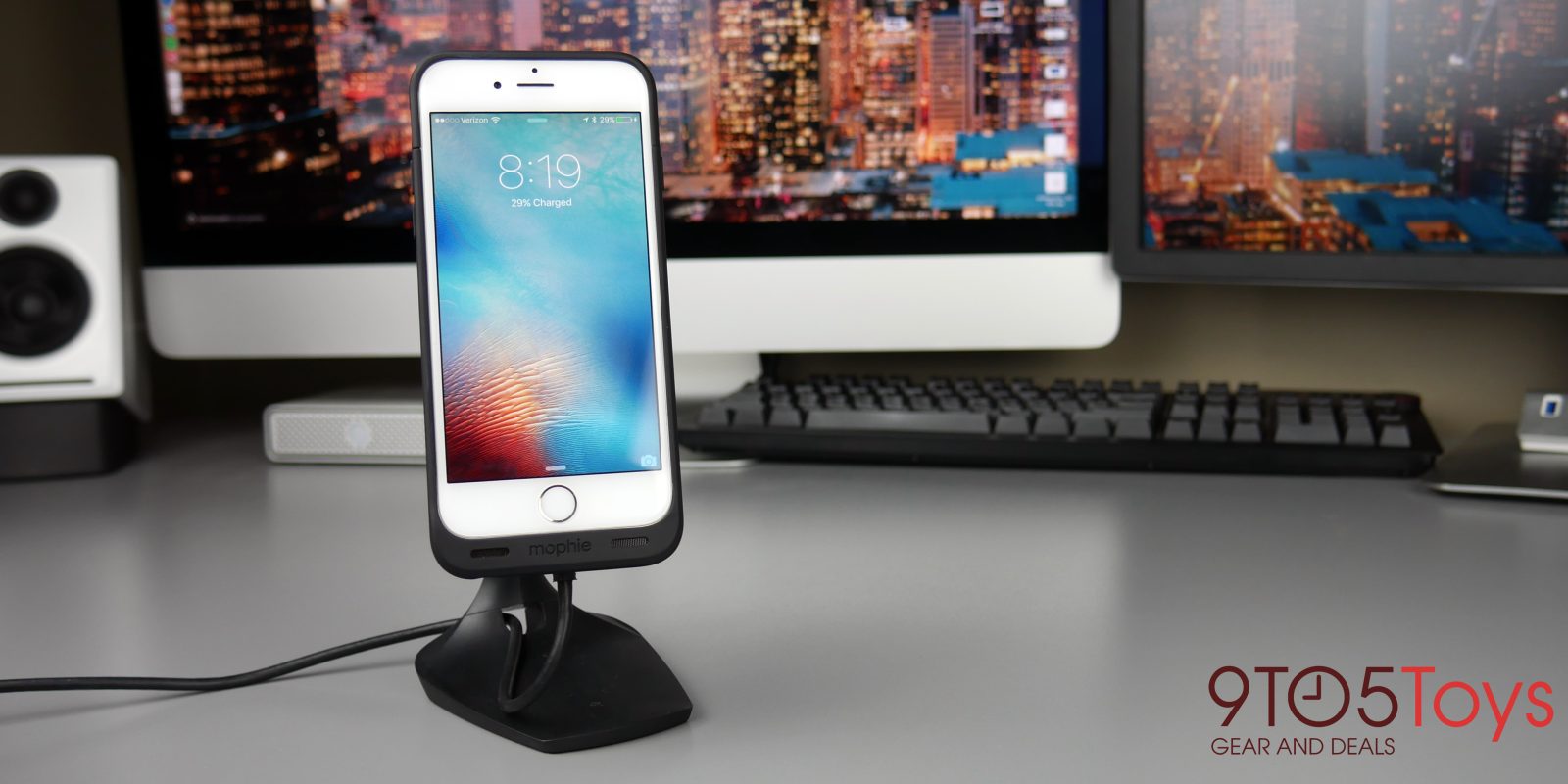 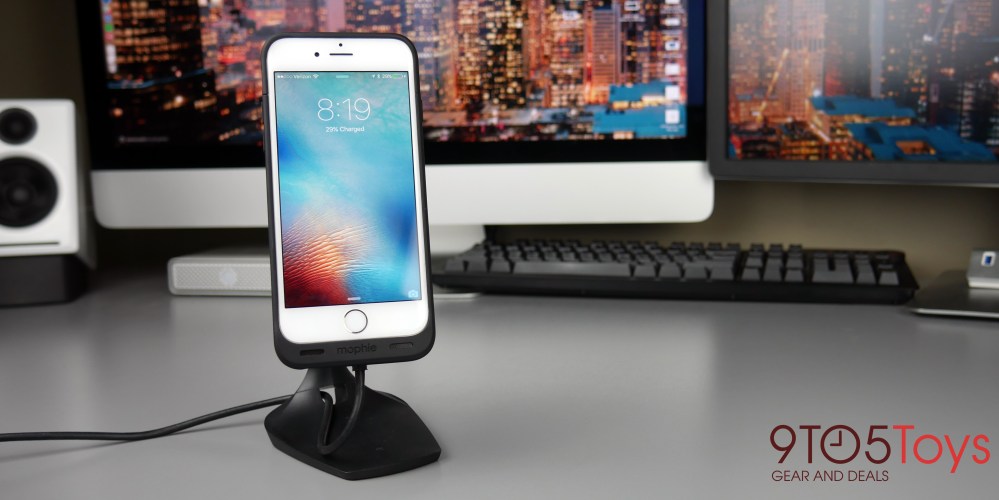 Towards the end of last month, Mophie announced a new line of Juice Pack battery cases for iPhone with wireless charging capabilities. These fresh products bring a lustworthy feature that Android users have been enjoying for some time. Over the past few weeks, I’ve been tinkering with the new Charge Force lineup. Mophie has long been known as one of the most reliable brands in the accessory world and its latest release continues that trend…

If you’ve used a Mophie battery case in the past, getting started will be a very familiar experience. The top of each case pops off about 1/4 of the way down just underneath the camera cutout. A recessed channel down each side guides your device to the Lightning or microUSB charging port at the bottom. Setting up the base charger, desktop, or car vent mount is as simple as plugging in the device with the included power block and connecting it via the three-foot long cable.

As per Apple guidelines, your iPhone will charge first before the case is able to receive a full power-up. This ensures that your device is ready to go with a topped off battery each morning. As long as it is on the charging station all night, you shouldn’t run into any problems with both the case and phone being fully charged.

For this review, I was able to check out Mophie’s new iPhone 6/s and 6/s Plus cases alongside the Galaxy S7/Edge versions. We’ll primarily be focusing on the Apple-specific cases as wireless charging is new to that product in particular. The Android options also support this type of power transfer but have done so for some time.

The $100 juice pack wireless battery case for iPhone 6/s has an internal 1560mAh battery while the larger $130 Plus model packs a 2420mAh supply. Users can expect up to seven and twelve hours of extra battery life, respectively. Mophie includes its flat wireless charging base with these two models while Android users are not afforded that luxury. 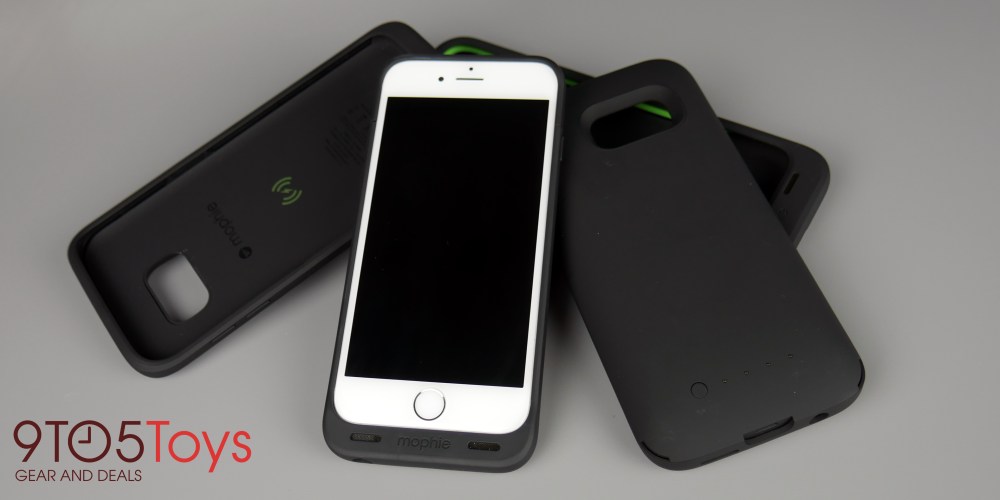 Mophie sticks with its standard matte design on the Charge Force lineup. This has some downfalls that we’ll explore later. A circular button on the backside actuates the power supply as well as the LED indicator lights. There is full access to all of the necessary ports and buttons on the side including your volume rocker, silencer, and 3.5mm port. Mophie includes an extension for the headphone jack as connectors are not going to be able to fit in the recessed port.

Switching over to the Galaxy S7, $100 will get you a 2950mAh case that brings an additional 13 hours of talk time. The Edge model carries the same price tag and extended battery life but has 3300mAh built-in power supply.

Overall, you won’t find much differentiation from previous Juice Pack cases. The big addition here is wireless charging which only calls for a change on the internals. 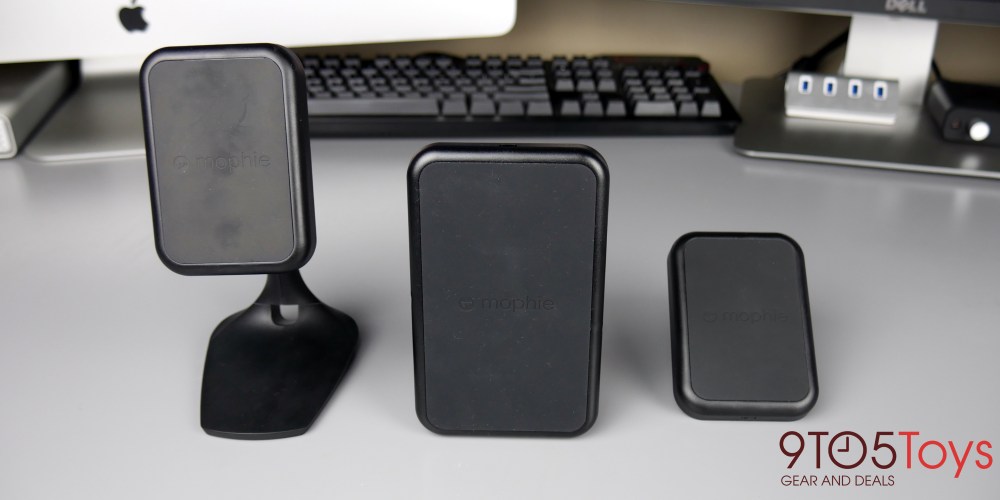 There are three different charging options available for use with Mophie’s new Juice Pack cases. As we mentioned above, the $40 charging base comes with the purchase of an iPhone 6/s/Plus case. It makes for a solid but slightly underwhelming option for charging your device. If you don’t mind having a horizontal orientation while powering up, it does the job just fine. A small LED indicator light on the front simply serves the purpose of communicating whether charging is in process or not. A 2.4A wall charger is included with purchase, which is nice given that popular docks like the Twelve South HiRise do not.

The Charge Force Desk Mount offers an upright and adjustable design that allows for easy operation while in use. At $60, it is fairly competitively priced with other options from Belkin, Twelve South, and the like. A single arm extends from the base and connects to the charging pad. It has a pretty full range of motion, which is handy for changing angles, etc. My one major complaint here is that the microUSB cable is fished through the backside and plugs into the bottom of the pad. For $60 I would have liked to see a more elegant design that hid any wires. 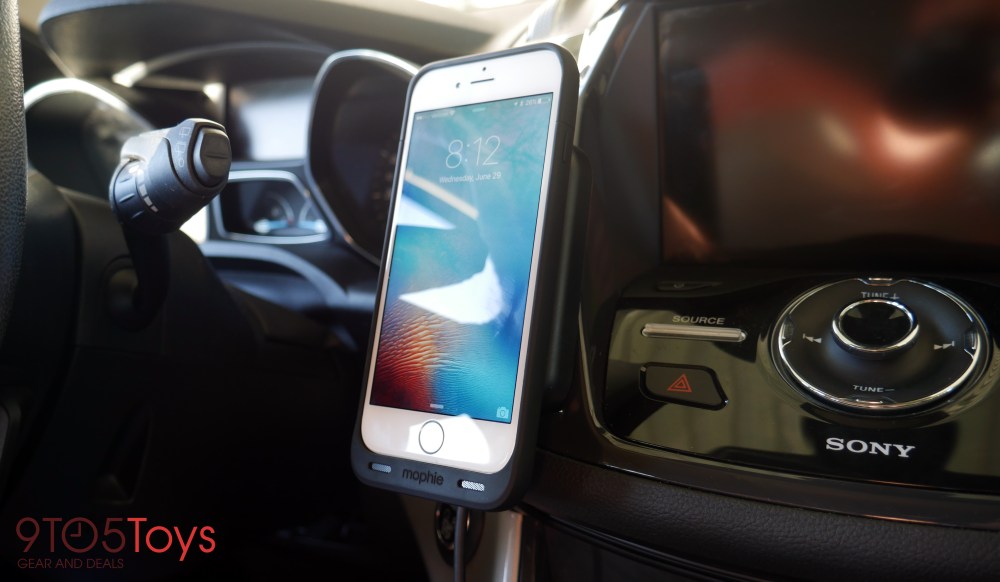 Finally, my favorite of the lot, Mophie’s Vent Mount. As you know, we regularly feature similar products in our daily smartphone roundup. The inclusion of wireless charging takes this to a whole different level for me. It’s easy to put your device on the mount while driving and keep it elevated at eye level for safety. At $60, it’s more expensive than competitors but adding wireless charging is worth the bump in price. Mophie includes a 2.4A car charger to provide power, as well.

All of the charging stations in this review have a built-in magnet system that Mophie promises will automatically align your device for a “perfect charge every time.” I found this to be true but at some cost. The magnets are quite powerful and often caused my phone to snap into place with greater force than I expected. It’s not a comfortable click, rather there is quite a bit of force behind it. The flip side of that is knowing your device will not move from its perch while charging.

Wireless charging has been one of those Android features that some iPhone users have been clamoring for over the past few years. Apple has yet to officially offer support, so brands like Mophie are left to come up with solutions such as its Charge Force lineup to bring this sort of functionality. Overall, there were not many issues.

Because Apple requires its devices to have priority charging over the case itself, I did run into one annoyance, often in the middle of the night. After my iPhone was fully charged and the battery case was also topped off, power would continually flow to each device. This means that my iPhone was constantly announcing that it was “plugged in” and beginning a new charging cycle. It made for a vicious round-and-round that eventually led me to silence my device. However, that means that I was vulnerable to missed calls or texts.

Issues like that are simply a part of the growing pains of trying to bring a workaround charging solution to a product that does not support it natively. If my iPhone had wireless charging, none of this would be an issue. It’s something to consider when potentially making the jump to Mophie’s wireless charging line.

One other area of note is the matte case design. I found that the top sheen quickly fades away after just a week’s worth of use with the shell became prone to dings and scuffs. It isn’t particularly noticeable in the beginning but I can only imagine how rough it might look after a year or more.

Mophie has long been known for its exceptional and trustworthy products. However, the Charge Force line feels like it still needs a little more attention and refinement. If you’re an early adopter that has longed for wireless charging on iPhone, then this is a viable option. The pitfalls that I noted above are worth considering, especially with the level of investment you’ll need to bring wireless charging to every scenario in your life.

The entire Mophie Charge Force line is available for purchase at Amazon.