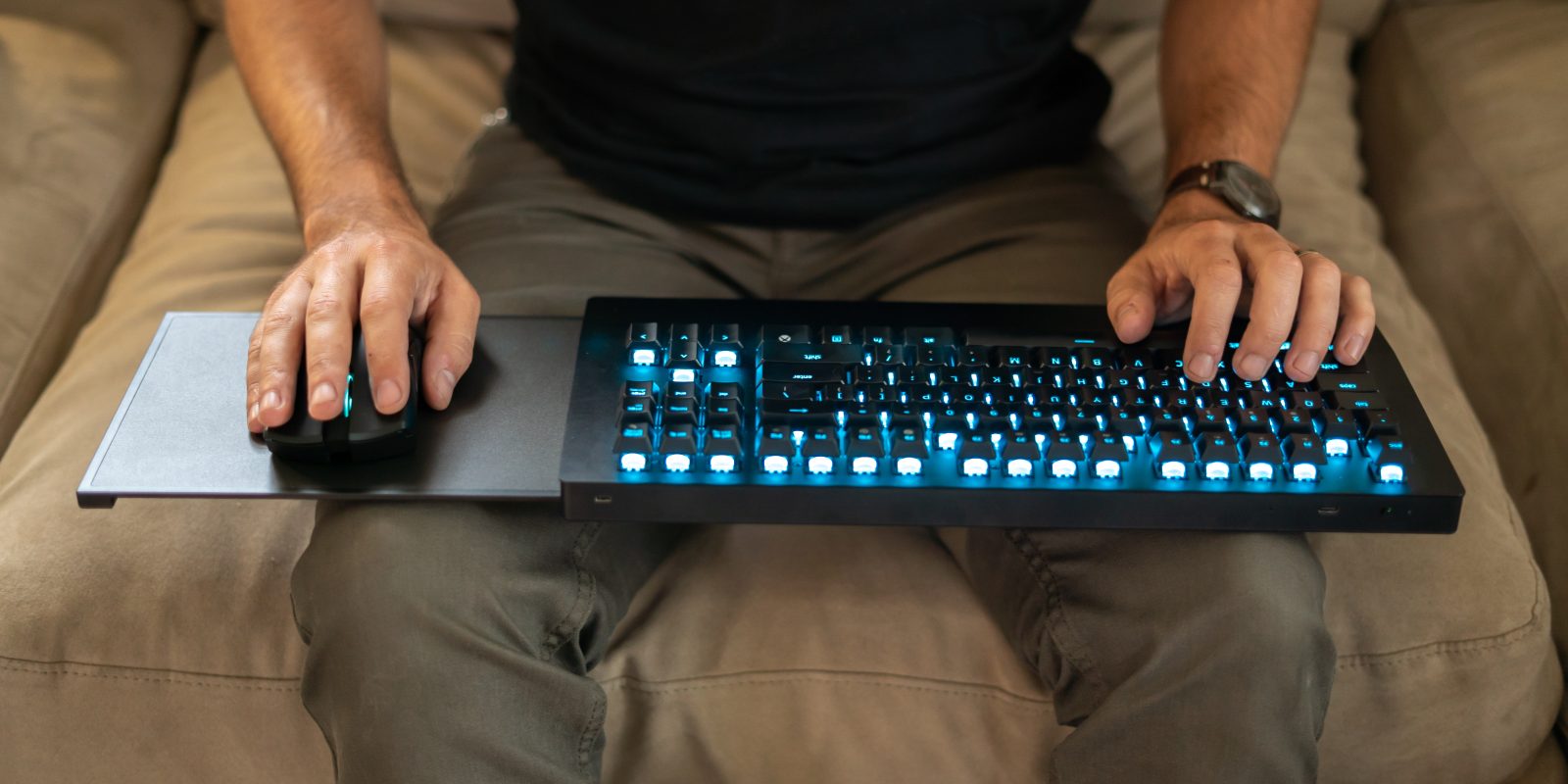 Razer’s new Turret wireless mechanical keyboard and mouse Xbox combo seeks to make couch gaming even more convenient. It’s marketed directly at the Xbox One but also works perfectly well on Windows. With a built-in extendable mouse pad, long battery life and single USB dongle, the Turret makes it easy to game from the couch. Check out the video below.

We’ve covered a lot of Razer’s more recent peripherals and even did a series highlighting various Chroma features. The Turret makes wireless gaming from the couch incredibly easy with its simple, functional design. It also features the same RGB functionality through the Razer Synapse app that we highlighted in the Chroma Cave series.

The first thing I noticed on the keyboard when getting it out of the box was how much it weighed. With the battery, the keyboard has a bit of mass to it. I don’t think that’s a bad thing, it feels extremely solid and sits well on my lap. 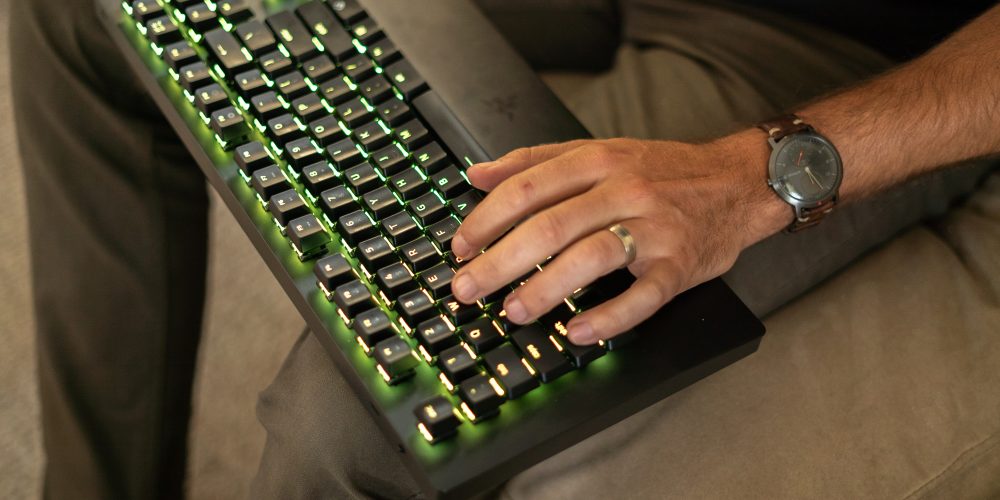 A staple in Razer’s lineup, the Turret keyboard uses Razer Green switches. These are described as tactile and clicky and are pretty common in Razer’s PC-only peripherals. They feel heavier than the opto-mechanical switches on the Huntsman Elite that I’ve been using, but they still feel good and have an incredibly satisfying sound when depressed thanks to those switches. If you want to hear them, be sure to watch the video directly below.

On the right side of the keyboard is the extendable mouse pad. The built in mouse pad has two different positions. By pushing in a It can be pulled out a little ways to hold the mouse for storage, or fully-extended for normal use.

Similar to the Mamba, the Turret’s mouse is a right-handed design. With the battery, and a magnetic connection to the mouse pad, the mouse is a bit heavier than the Mamba Elite I’ve been using recently.

Another thing that makes it feel a bit heavier is the magnetic connection to the mouse pad. This is designed to keep the mouse from sliding off when moving or being stored, which works really well, but it is something you can feel when trying to pick up and move the mouse. This also seems to grab the border of the mouse pad well to keep it from sliding off and falling.

What would some new Razer gear be without RGB? Both the keyboard and mouse feature customizable RGB that works on both PC through the Synapse app, and on Xbox One through its own dedicated app. This does drain the battery of the peripherals much faster though. It takes the mouse from 50 hours of battery life to 30, and the keyboard from 43 to 11.

Because of the, in my opinion, small mouse pad, you really need to play with a high DPI to take advantage of the Turret when used on a lap. This is a big change for me since I’m used to playing at 400dpi on PC (I mainly play FPS games). It took some getting used to and I don’t think I’m as accurate as I can be on a desktop, but everything functioned as expected.

I played a few matches of Fornite and a bit of Minecraft throughout my texting. With Fortnite, you are put into a lobby with other mouse and keyboard users. I saw maybe the slightest bit of input lag, but it really didn’t feel like much and felt better than a controller usually does.

For PC, the keyboard and mouse offer a solid wireless connection. I couldn’t notice any input lag in normal gaming. The ergonomic feel of the mouse was great and felt right at home. The Keyboard is completely flat on the bottom and doesn’t have any adjustable support, which is a bummer in my opinion. I prefer to prop a keyboard up a bit and that’s not a built in option with the Turret keyboard. 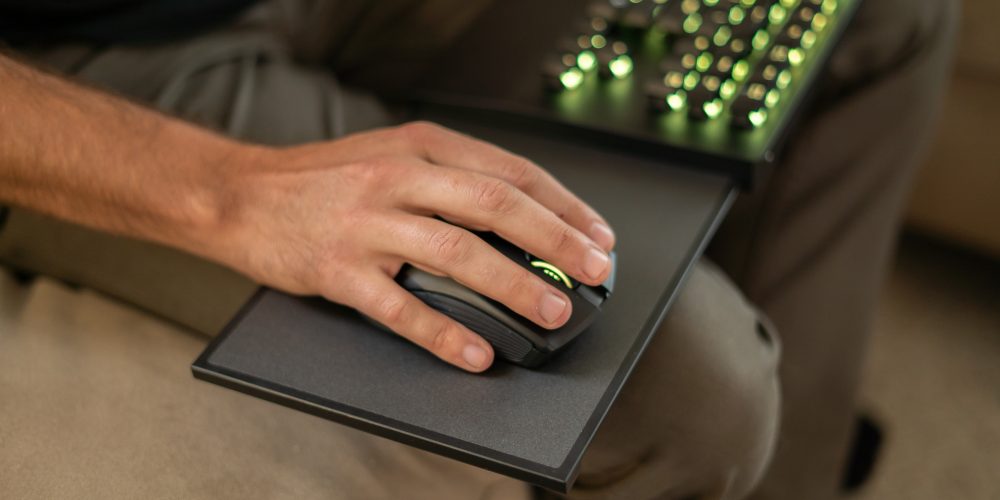 So the biggest hurdle for the Turret being a huge success is the short list of titles that currently support mouse and keyboard. There are some popular titles like Fortnite and Minecraft and some others coming soon like Gears of War 5, but it total there are less than 20. That absolutely limits the use of the Turret if just being used for Xbox gaming. But, I’ve found it to work well on Windows as well.

When it comes down to it, if you need a couch gaming option, the Turret is a great choice. It is a little pricey at $250, but it opens up a great world of portability. The mouse feels just like Mamba, and the keyboard is solidly built. The extendable mouse pad is handy. It is obviously geared for Xbox One, had hopefully the list of available titles that support mouse and keyboard continues to grow.

Buy the Razer Turret on Amazon