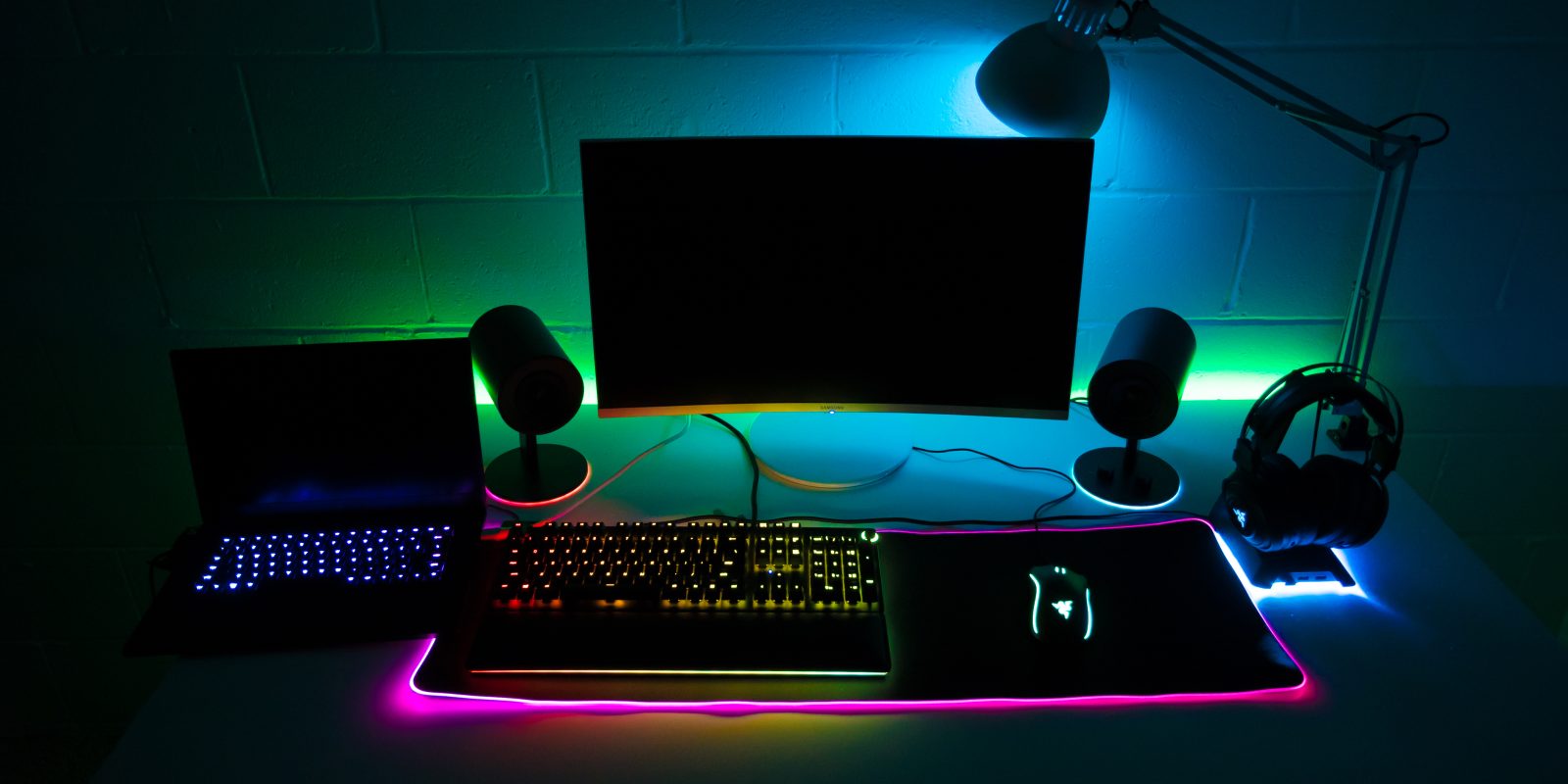 Welcome to the third and final installment in our Chroma Cave series. We’re building a RGB gaming station with components that exclusively features Razer Chroma. In this episode, we’re going to take a look at every Chroma component to see how it all works together within the Synapse Chroma Studio to provide an immersive RGB experience. Hit the jump for our full video review.

In case you missed it, part 1 of the series was on the heart of the Chroma Cave – the Razer Blade 15. Chroma is present on the entire Blade line, but the per-key RGB and RTX graphics on the advanced model is what we were after. It’s more than capable of lighting up the Chroma Cave and looking good doing it. Be sure to check out the article and watch the video.

The Goliathus Extended is an extra long mousepad with a RGB strip along the entire border and available for $59.99. I have used SteelSeries pads in the past but am very happy with the look and feel of the Goliathus. I tend to game a low DPI (I mainly play FPS games) and could use a little bit of a taller pad, but the Goliathus Extended offers plenty of lateral room and the Chroma border is beautiful. The material of the mousepad does suck up a lot of the light from the Huntsman Keyboard – minimizing the Chroma effects from the base and wrist rest. I do like that that they have the USB cable on the upper left side of the mousepad. If it were anywhere else would feel in the way. 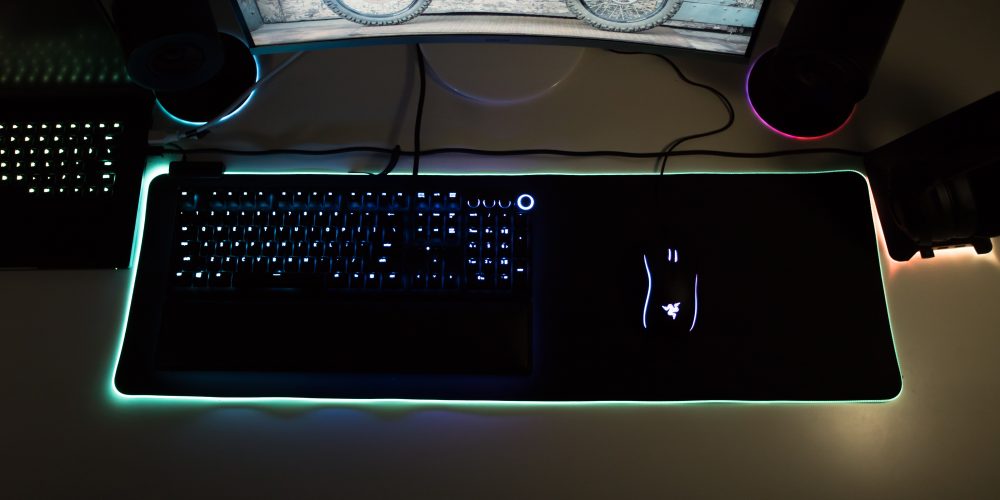 Razer is known for making great mice and the Mamba Elite, coming in at $89, is no exception. I’ve been a big fan of the Deathadder and the Mamba Elite feels very familiar with some added RGB features. The Mamba Elite is the “most razer chroma you’ll ever get in a mouse” with 20 lighting zones. 16,000 DPI and 9 programmable buttons make it functional as well as beautiful.

The Razer Nari is a massive wireless headset powered by Chroma. There are other variants of the Nari, but the example we have here in the Chroma Cave is the Razer Nari priced at $149. It offers Chroma, THX spatial audio, and built in chat and game channels that can be adjusted on the headset. It is surprisingly comfortable for its large size, I can easily wear for multiple hours while gaming without any discomfort. They seem to be heavy on the bass frequencies, which some gamers prefer. 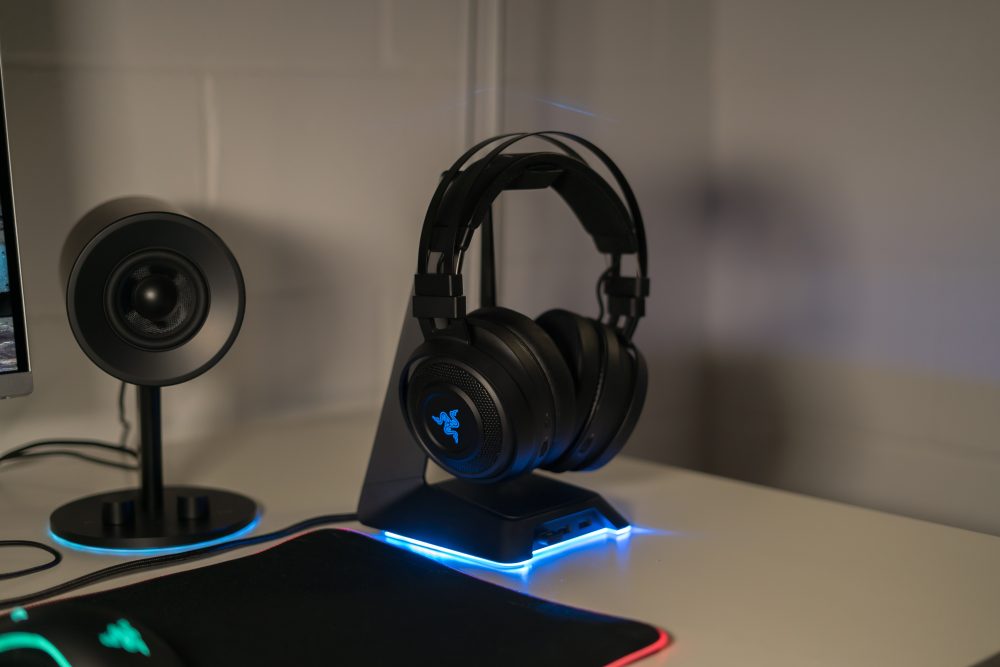 For $60, the Base Station Chroma is a great way to add some more RGB, USB connectivity, and show off your headset. The three USB ports in the front are very handy when everything needs USB for Chroma. Chroma on the Base Stand is great – it seems to cast a bit more light than some of the other components. I do wish the cable was a bit longer as it barely reaches across the Goliathus Extended mousepad making placement limited. 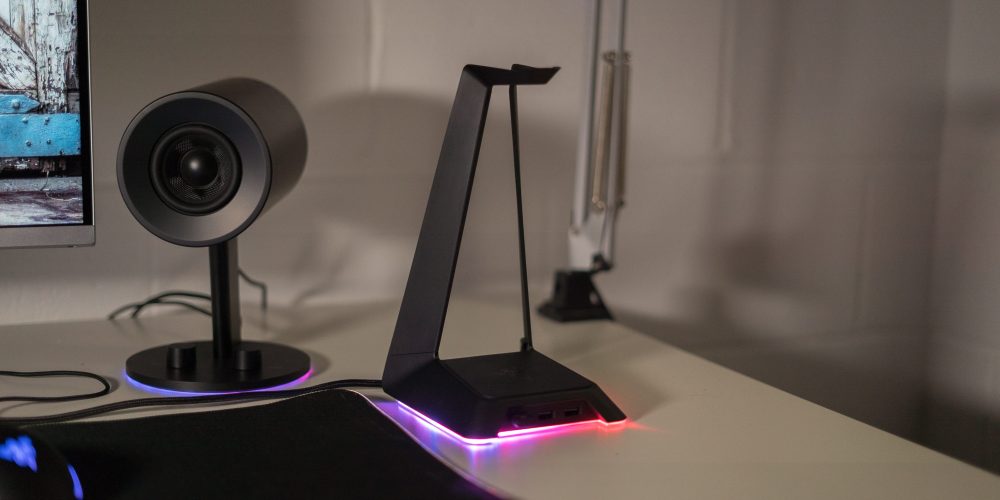 The Nommo Chroma 2.0 speaker set features RGB around the base of the speakers for $149. This Chroma reacts to changes in volume, amount of bass, and turns red when volume is muted for some really neat interactive lighting effects. There are eq settings built into Razer Synapse which helps to dial in sound for different scenarios. Razer has an upgraded version as well, the Nommo Pro which features a subwoofer and some tweeters in addition to the 3” drivers found on the Nommo Chroma. The Nommo Pro is priced at $499. 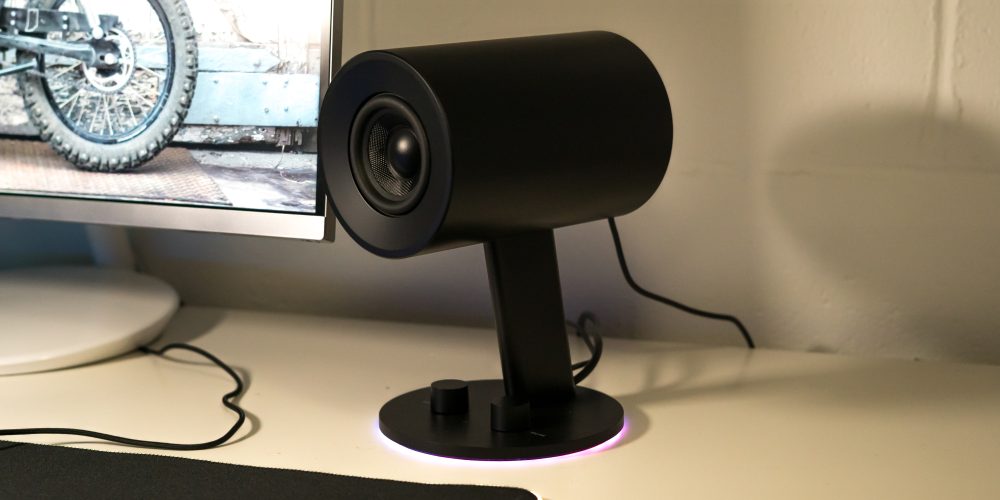 The Chroma Studio within Razer Synapse 3 is what brings all of the Chroma components together. Within Chroma Studio, you can layout all of your components on a canvas like they are in your actual gaming station and Synapse will send lighting color through the entire system. It’s awesome to see waves of light moving across the entire setup – from your laptop on one side to your headset on the other.

There are also other apps, like the audio visualizer that bring RGB lighting effects to experiences other than gaming.

Another app and featured partnership with Razer is Philips Hue Sync. I have one of their RGB LED lights in the Chroma Cave to add color to the entire room. I have my desk set up against a white brick wall with the bulb in a desk lamp and sometimes it can be a bit much, but it definitely adds a new level of immersion to gameplay. In Apex Legends, for example, when you’re outside of the play zone, red color flashes over your Chroma gear, and the Philips light washes the entire room with red light, adding to the intensity of the moment.

Chroma adds a whole new level of immersion to gaming. I’ve been playing a lot of Apex with this Chroma setup and really enjoying it. Shooting a weapon flashes bright white light, getting gear flashes a color that matches its tier, and jumping from the plane causes waves of color to pass over your Chroma-enabled components. It adds a lot to the experience of playing the game, but doesn’t distract when situations are getting intense. Check out the video to see some of the Chroma in action. Not all games take full advantage of Chroma, but popular titles like Fortnite, Overwatch and Apex Legends are some that feature Chroma profiles.

So here it is, every Chroma bit in the Chroma Cave. Razer really does offer Chroma RGB on almost every piece of computer equipment you can get from them. Yes, it can be a bit excessive, but if the ultimate Chroma Cave is what you’re after, here is one way of reaching that goal.