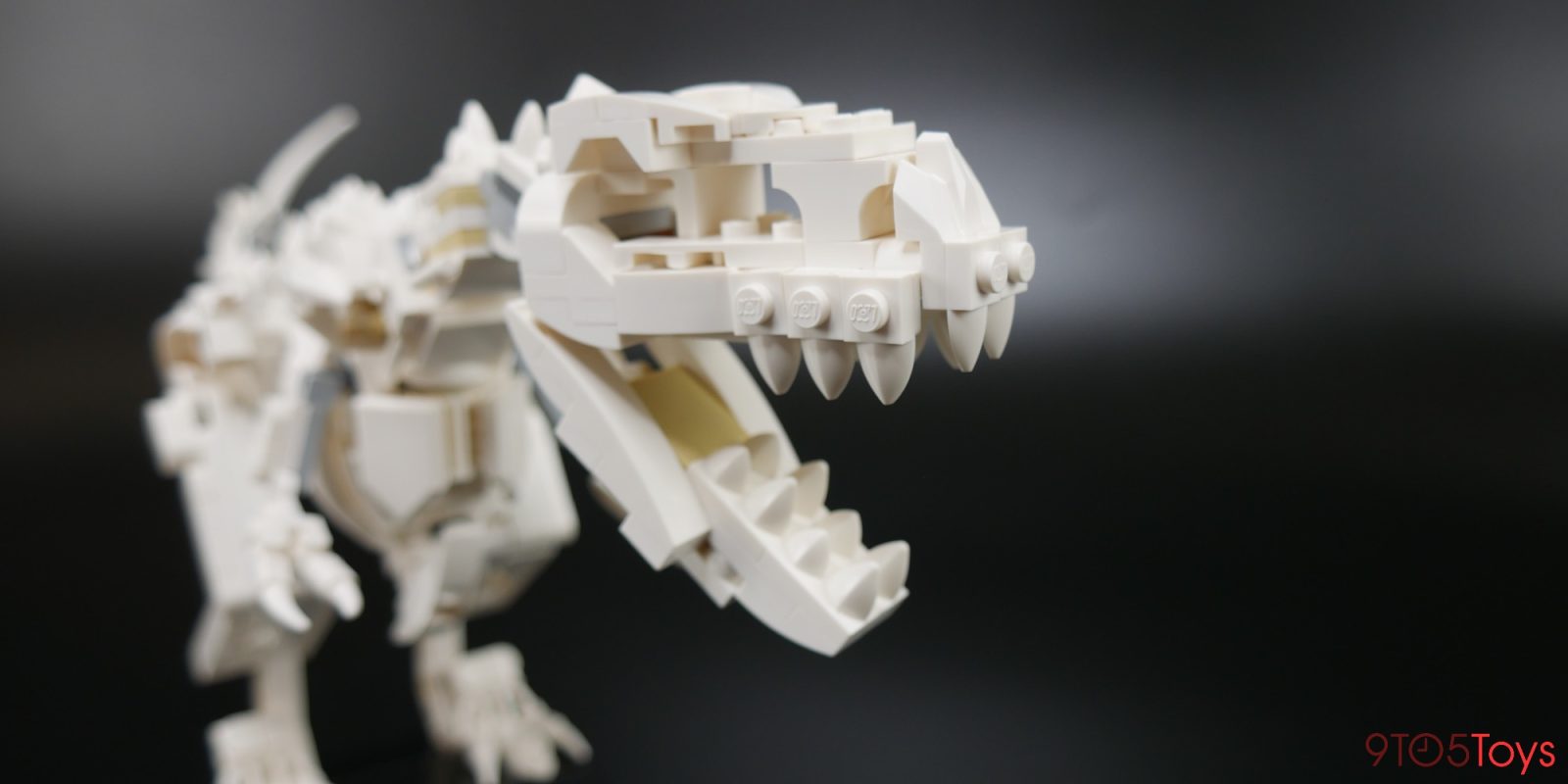 When it comes to collection worthiness and display-ability, no kits are as consistently eye-catching as the LEGO Ideas theme. In the past, we’ve found those sentiments to hold when looking at builds like the Ship in a Bottle, but today we’ll be turning out attention to the latest fan-inspired creation, which aims to bring the hallmark of prehistoric exhibits into your collection. Head below for a closer look as we uncover all of the Mesozoic details in our review of the LEGO Dinosaur Fossils set.

As LEGO’s latest Ideas creation, the Dinosaur Fossils set first caught our attention back in January of 2018 when the concept was still in its infancy. Having not yet been approved to be a formal kit by LEGO, the model will still be gaining tracking on the Ideas crowd-funding site. Fast-forward to last fall, and the official version of prehistoric fossils hit the scene to our delight.

Entering with 910-pieces, Dinosaur Fossils is comprised of three different skeletons, including a Tyrannosaurus rex, Triceratops, and Pteranodon. All three are paired with display stands complemented by display plaques showcasing their respective names. To complete the museum vibes that this model has going for it, you’ll also assemble a paleontologist minifigure and a LEGO-sapien skeleton. Plus, there’s a batch of archeological tools and accessories included as well. 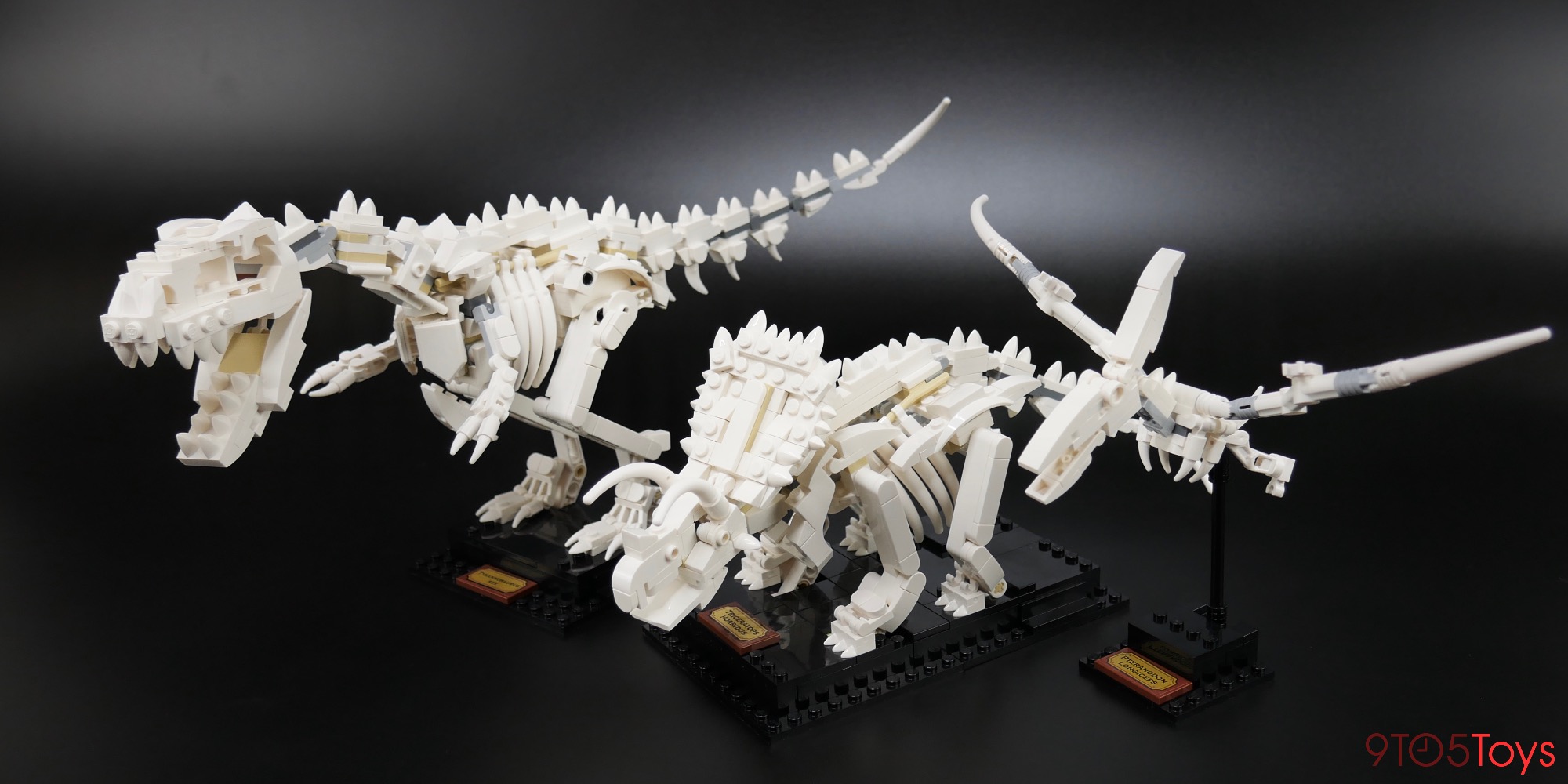 Each of the dinosaurs included in the LEGO fossil set is assembled at a 1:32 scale, which fits nicely in with the project’s idea of being a museum display. I’m no paleontologist, but the sizing between each of the skeletons seem spot on, so authenticity is something you can count on, at least when it comes to being assembled out of LEGO.

The star of this kit is undoubtedly the Tyrannosaurus rex, which is the most significant portion of the set and stands over 7-inches tall and 15-inches long. Despite the exhibit theming, the dino is quite posable for a display piece. You’ll be able to adjust everything from the long tail and little arms to the skeleton’s fearsome head and tooth-filled jaw. 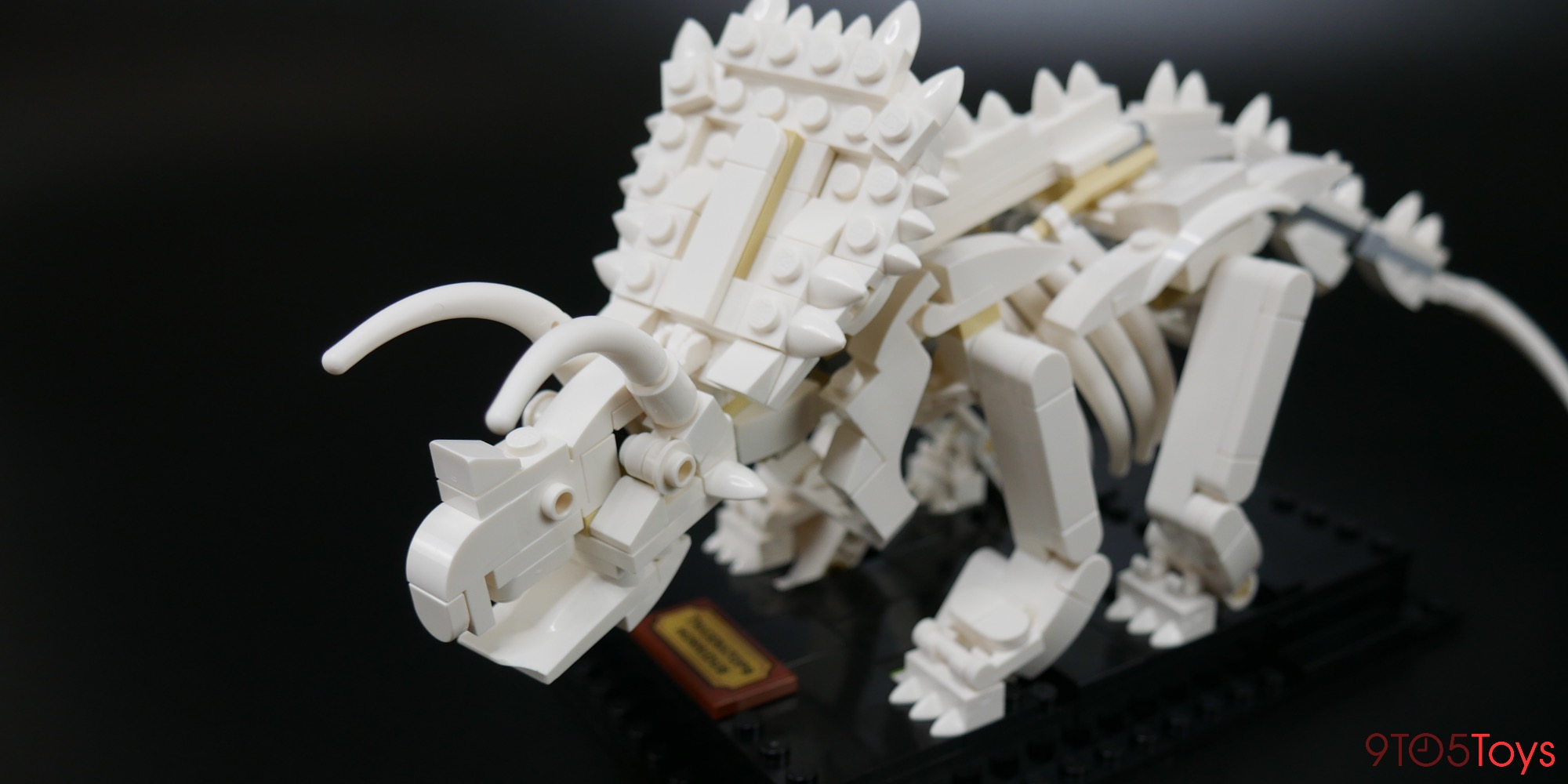 LEGO also includes a Triceratops build, which is a little smaller than the T. rex, and accurately so. I particularly love the details packed into this dinosaur’s head, as the set designer nailed the look here, in my opinion. The legs aren’t as impressive, though, and seem a little too barren compared to the details found elsewhere on the build. Lastly, there’s a miniature Pteranodon, or at least it’s quite small by comparison of the other two models. This skeleton is pretty basic, and there’s not too much about it that stands out.

So collectible, it belongs in a museum

If you’ve ever pieced together a LEGO Ideas kit, you’ll certainly know how the experience differs from the general assembly. If you haven’t, then the Dinosaur Fossils kit is a perfect place to start, offering the general next-level techniques and a more fulfilling building process.

With over a decade of releases in the book, the theme has a proven track record for pushing the envelope of what’s possible from the plastic brick medium. From our review, it’s worth highlighting how impressive it was for LEGO to recreate the fragile look of bones without sacrificing on the sturdiness found in the Dinosaur Fossils set. 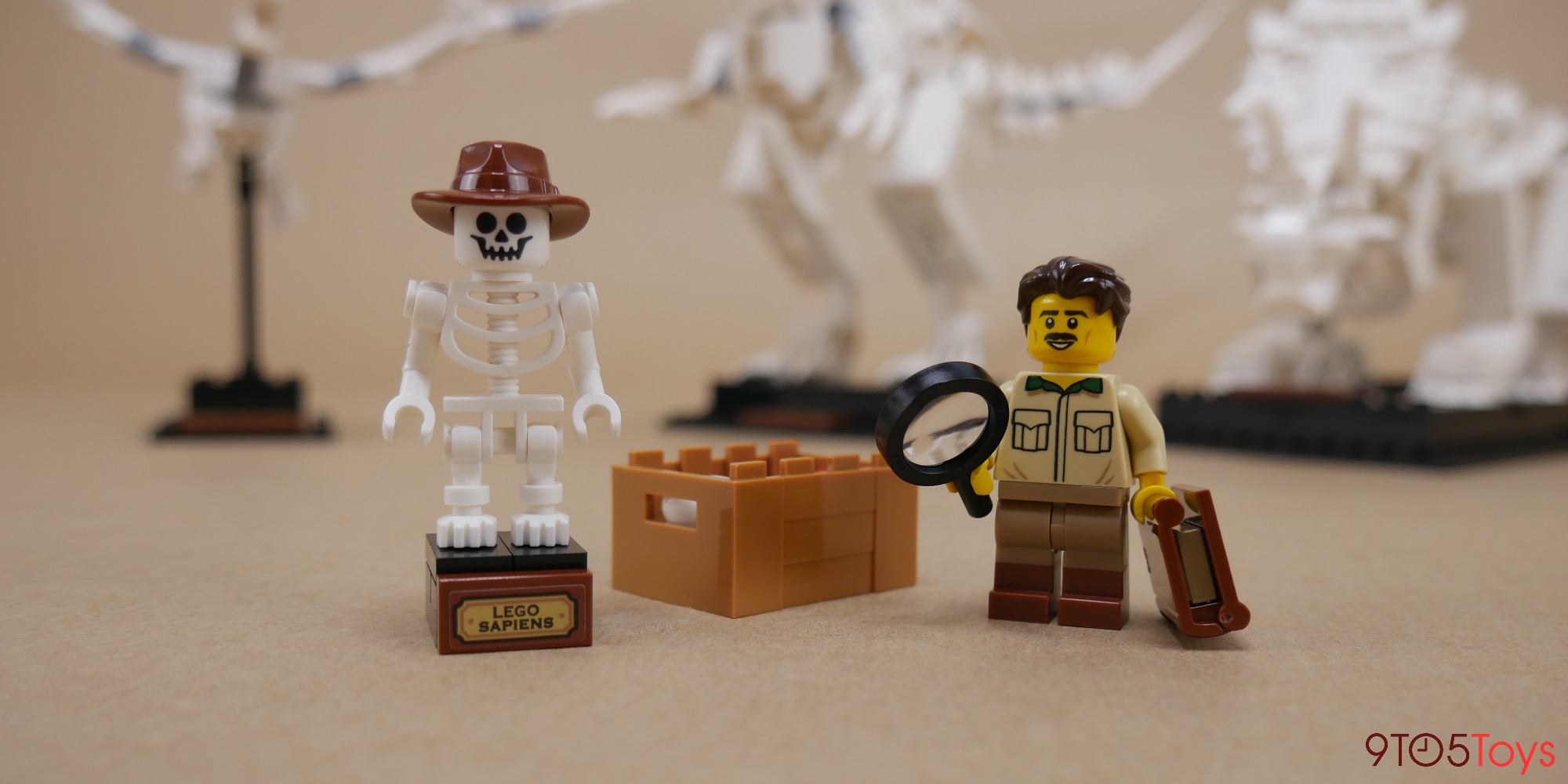 Despite all of the prehistoric action packed into the most recent LEGO Ideas kit, taking a look at these Dinosaur Fossils for review has us left with some mixed thoughts on the overall kit as a whole. Sure there’s no getting around how awesome the brick-built T.Rex is, but the other dinosaurs aren’t as eye-catching. The Triceratops is a solid creation, but lacks the overall polish of the carnivores companion model.

Then there’s the Pteranodon, which certainly adds some variety into the kit, but falls short of being a notable inclusion. It would have been nice to see LEGO exclude the latter and channel those bricks into improving the Triceratops. That way, there would have been two equally-impressive skeletons rather than having quality drop through each of the individual dinosaurs.

Just as we’ve come to expect from the fan-inspired theme, Ideas builds some of the most value-packed creations out there. And following our review, the LEGO Dinosaur Fossils kit performs just as well. For $59.99, you’re picking up 910-pieces, which equates to only 6 cents per brick. Sure, most of these are white elements, but that doesn’t subtract from the level of detail that such a high part count is responsible for. 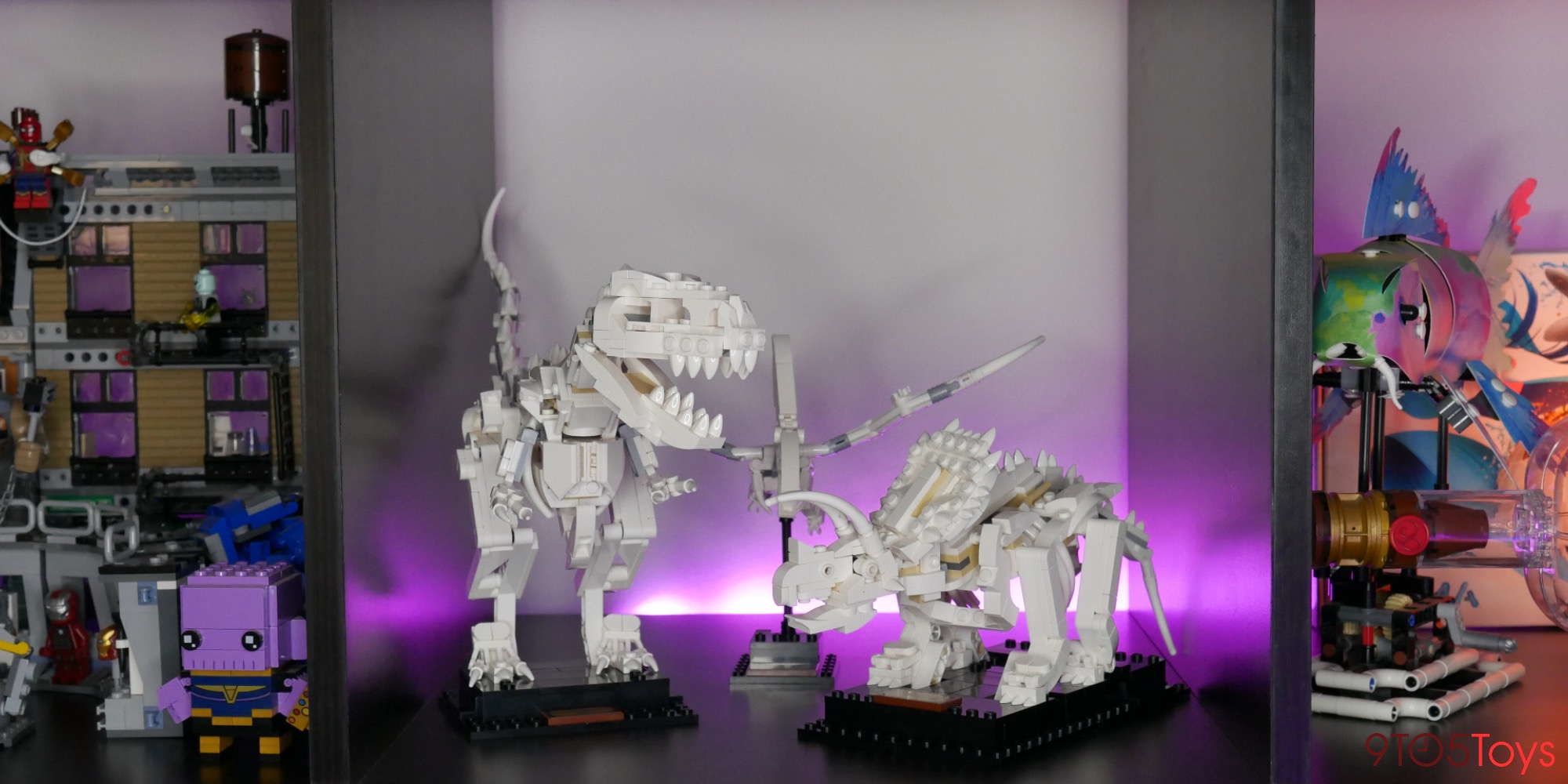 If collectibility is king, then the crown of the Cretaceous period is undoubtedly worth a spot in your collection. The LEGO Dinosaur Fossils set has plenty going for it, and aside from a few missteps, builds upon the Ideas legacy with yet another must-have creation inspired by fans. Being comprised of several smaller creations instead of a larger 900-part model is another strong suit that makes this kit easy to display.

Buy the LEGO Dinosaur Fossils set featured in our review