Review: LEGO Ideas’ Ship in a Bottle is a display-worthy kit fit for any collection 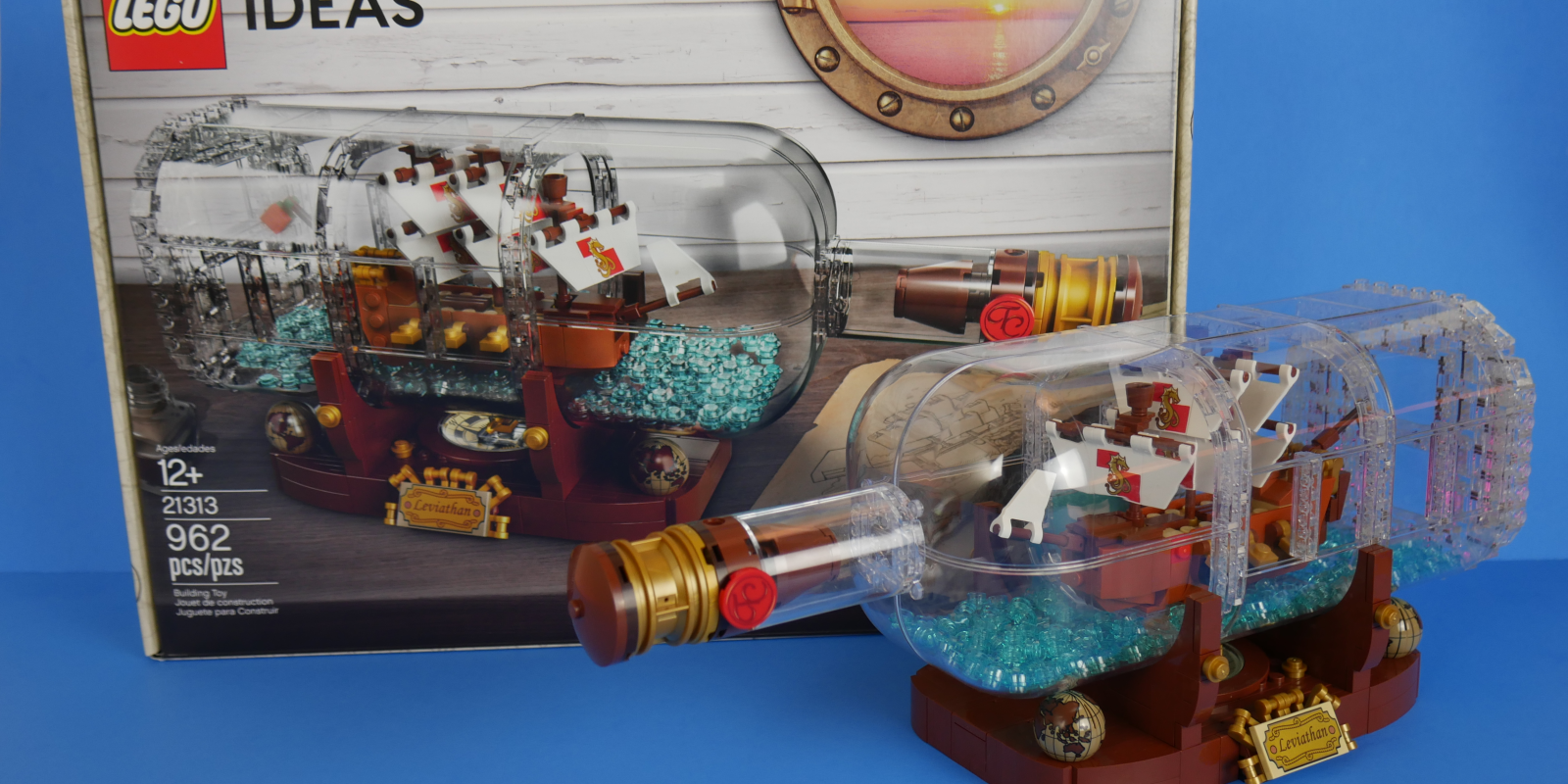 Just a few weeks ago, LEGO announced the latest set to join the Ideas lineup, the Ship in a Bottle (21313). And now that the kit has washed onto store shelves, we’ve finally gotten our hands on LEGO’s newest fan-made kit. Stacking up to under 1,000 pieces at its $69 price tag, the Ship in a Bottle is one of LEGO’s most-accessible, intricate and unique builds we’ve seen in some time. So be sure to head below for the full scoop.

As always is the case with sets funded through LEGO Ideas campaign, the box art and instruction booklet get a little bit more love than your average kit. The box features nautical-themed art like port holes, giant krakens, and maps, which carry over into the booklet as well.

Jumping inside the instruction booklet, there’s the usual inclusion of details on the creator, the build process and other interesting tidbits on what it took to turn the fan-made model into a bonafide LEGO set. I won’t go into too much detail here to avoid spoiling the info, but it’s all on-par with other sets. 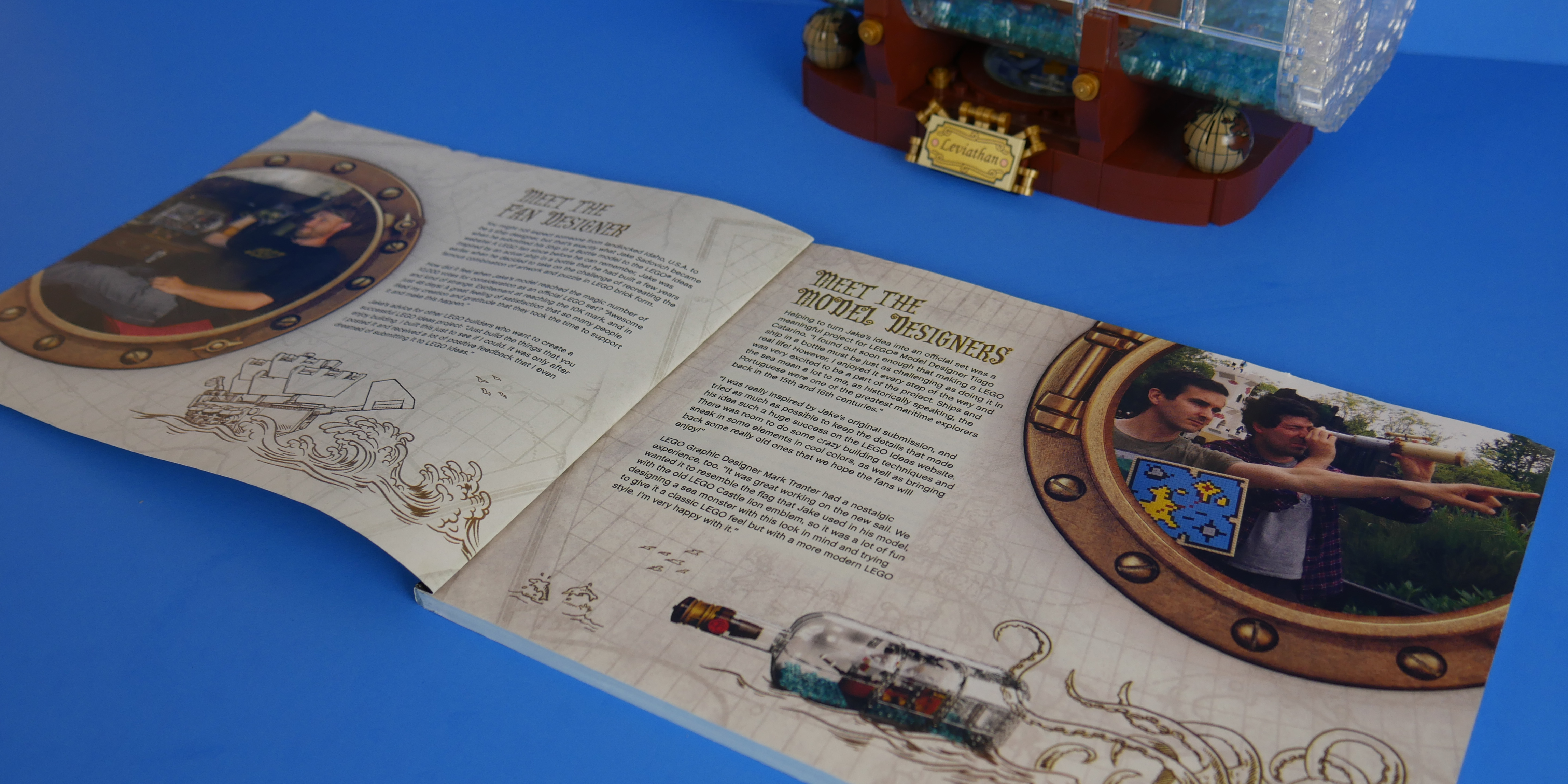 Piecing together the Ship in a Bottle can be broken down into 3 difference sections; the ship, the bottle and a display stand. Diving into the build starts with assembling the ship itself. The sea vessel is for the most part a typical LEGO build, but that doesn’t take away from the intricacies packed into it. Its haul is comprised of some curved, stud-less surfaces complete with cannon ports.

There are some gold fixtures towards the rear as well as a flag, but the real star here are the massive white sails. A lot of details are packed in here and take the ship from being a typical build to anything but. 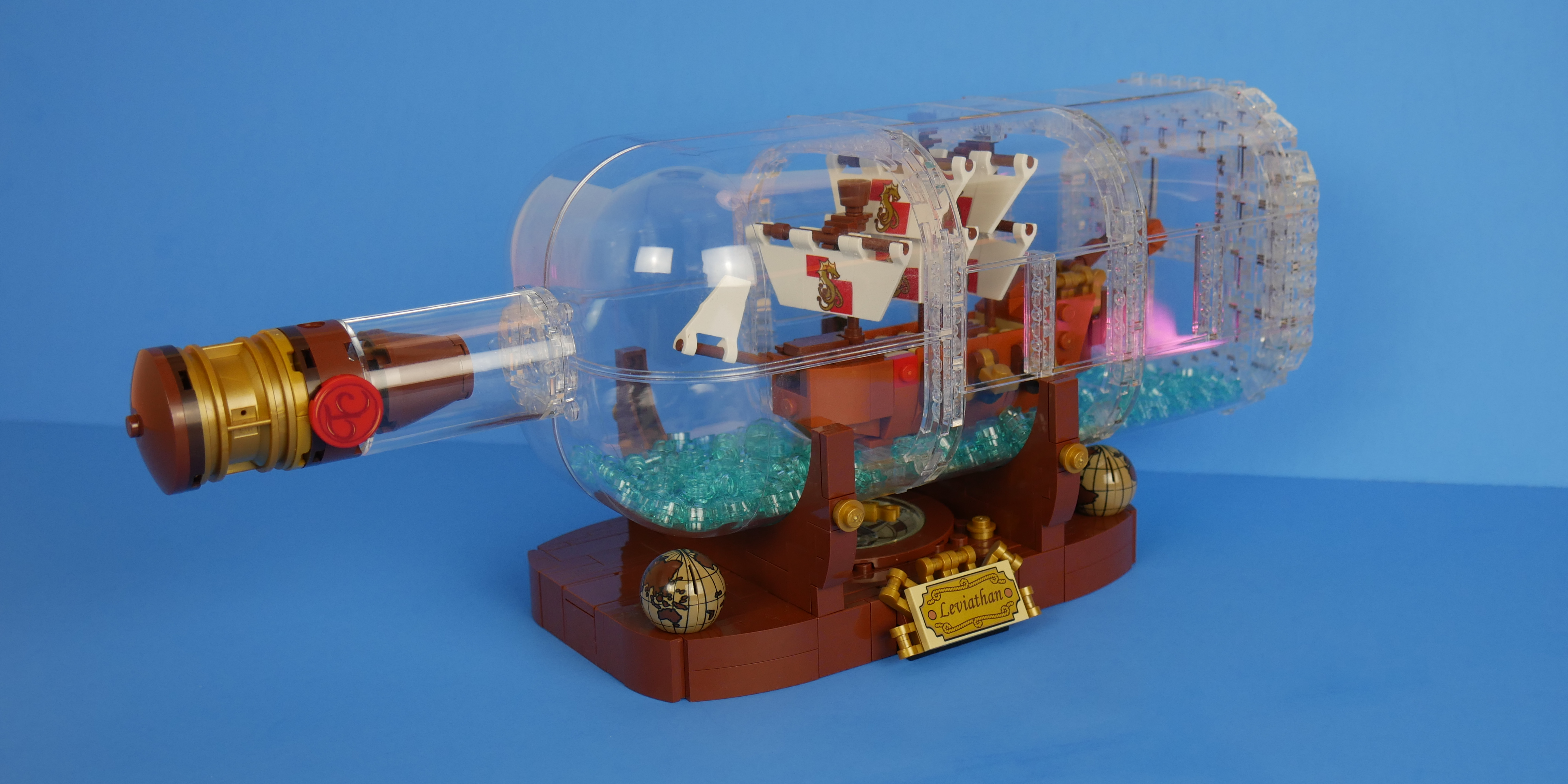 And while the ship utilizes some brilliant techniques to achieve the level of detail that it possesses, the bottle is a much more interesting in both its parts and assembly approach. Being that bottles are typically made of glass, this stage of the build uses a variety of transparent bricks to capture the classic ship in a bottle aesthetic.

This is one of the aspects of the kit that really stood out for me through the building process, as the LEGO designers behind the set have absolutely nailed the look of the bottle. Photos just don’t do it justice in my book. 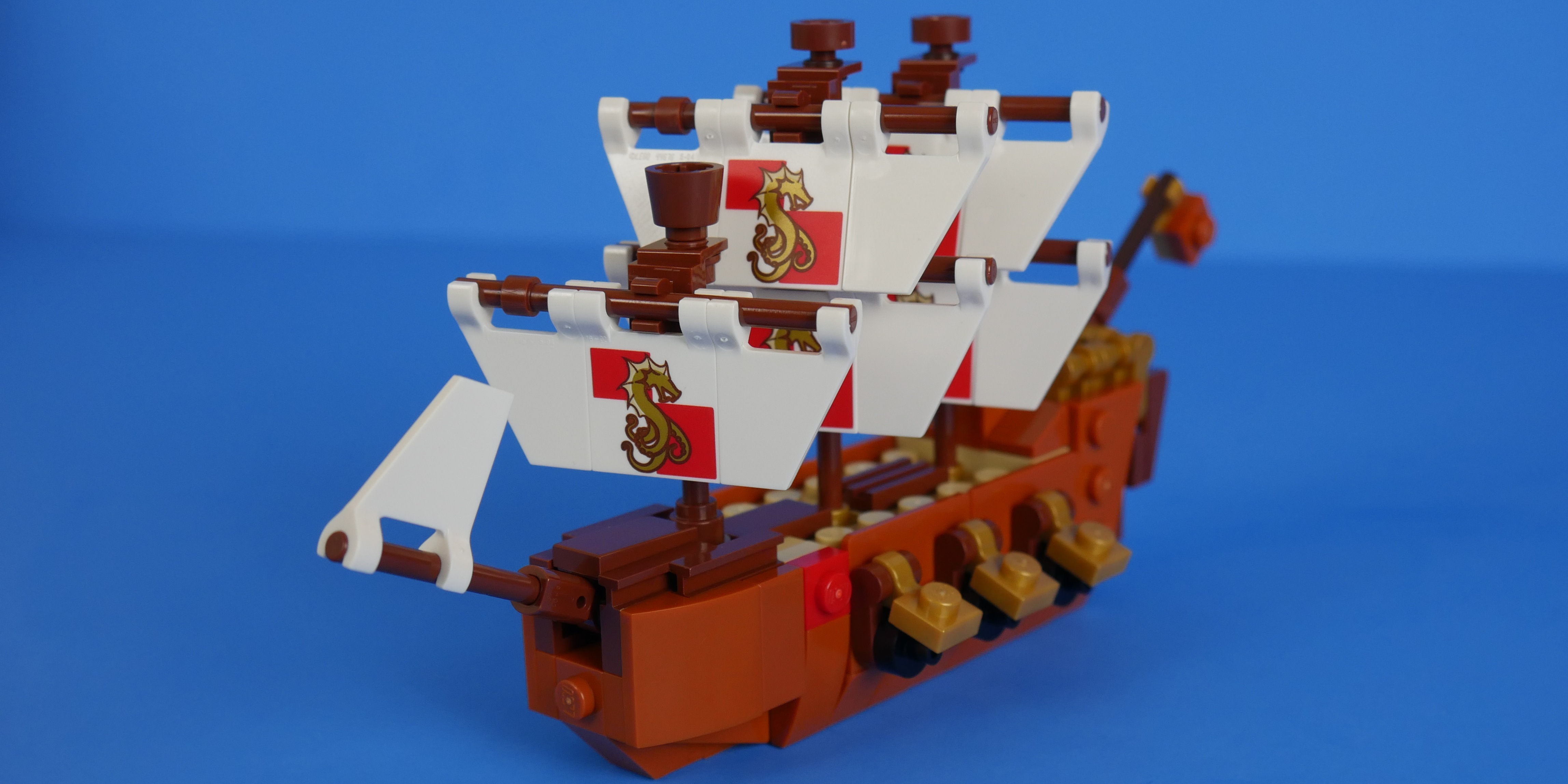 For things that are called bricks, LEGO was still able to recreate the curved bottle profile through use of both excellent part selection and new techniques not found in any other set. As you can expect, the bottle is in fact a fingerprint magnet, so you’ll have to keep your eye out for any smudges.

On a similar note, by far the most enjoyable part of the build falls to step 59. With 284 translucent blue studs in hand, you’ll fill the semi-completed bottle, resulting is what was the most satisfying sound to ever come from a LEGO set’s assembly. 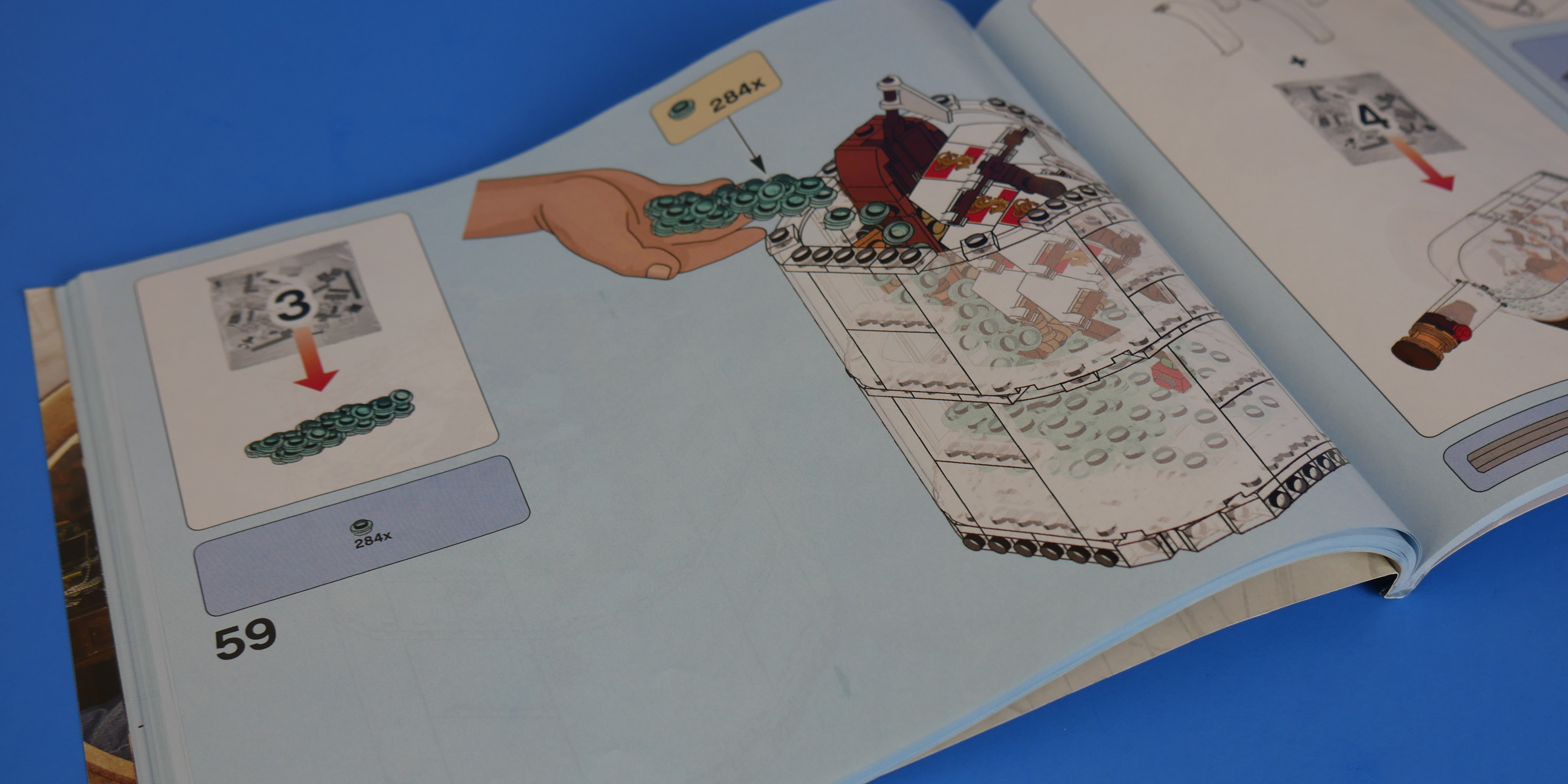 This gives the miniature ship the appearance of actually sailing on water and is an interesting technique for a set to employ. Of course that comes at the trade off of having several hundred pieces used for such an affect, a decision that in my book was well worth it.

Rounding out the build you’ll find a nifty display stand, which is by far the most straightforward aspect of the set. Given the simplicity of the stand, it still manages to incorporate some neat additions which allow it shine amongst the rest of the building. 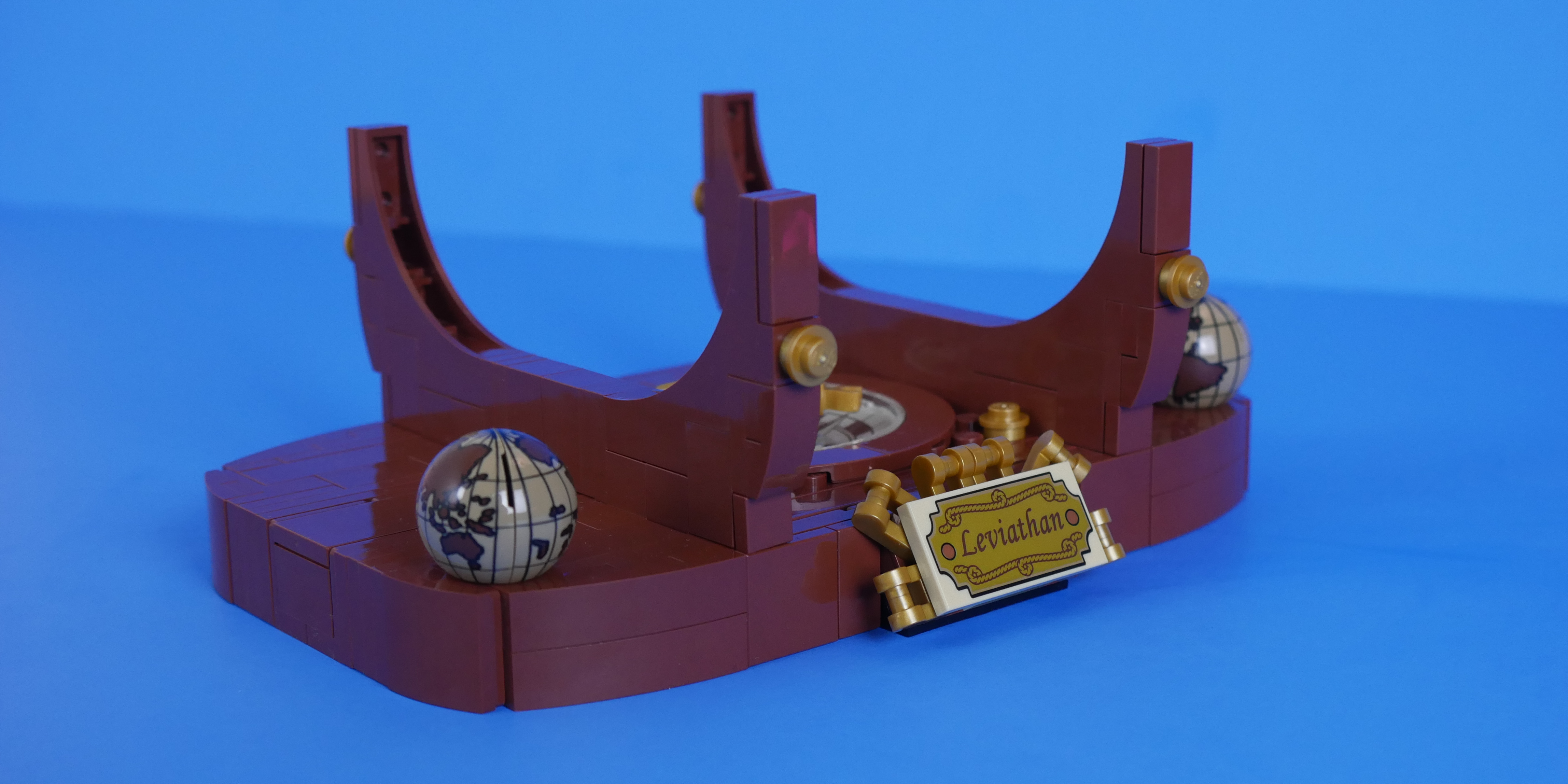 Most notable is a well-designed compass centered right underneath the bottle, along with some smaller accent elements like a golden name plaque, globes and more.

Overall I was really impressed with the final stage, as it uses some nice arch pieces to actually cradle the bottle. But the former two sections were just that much more captivating for me. 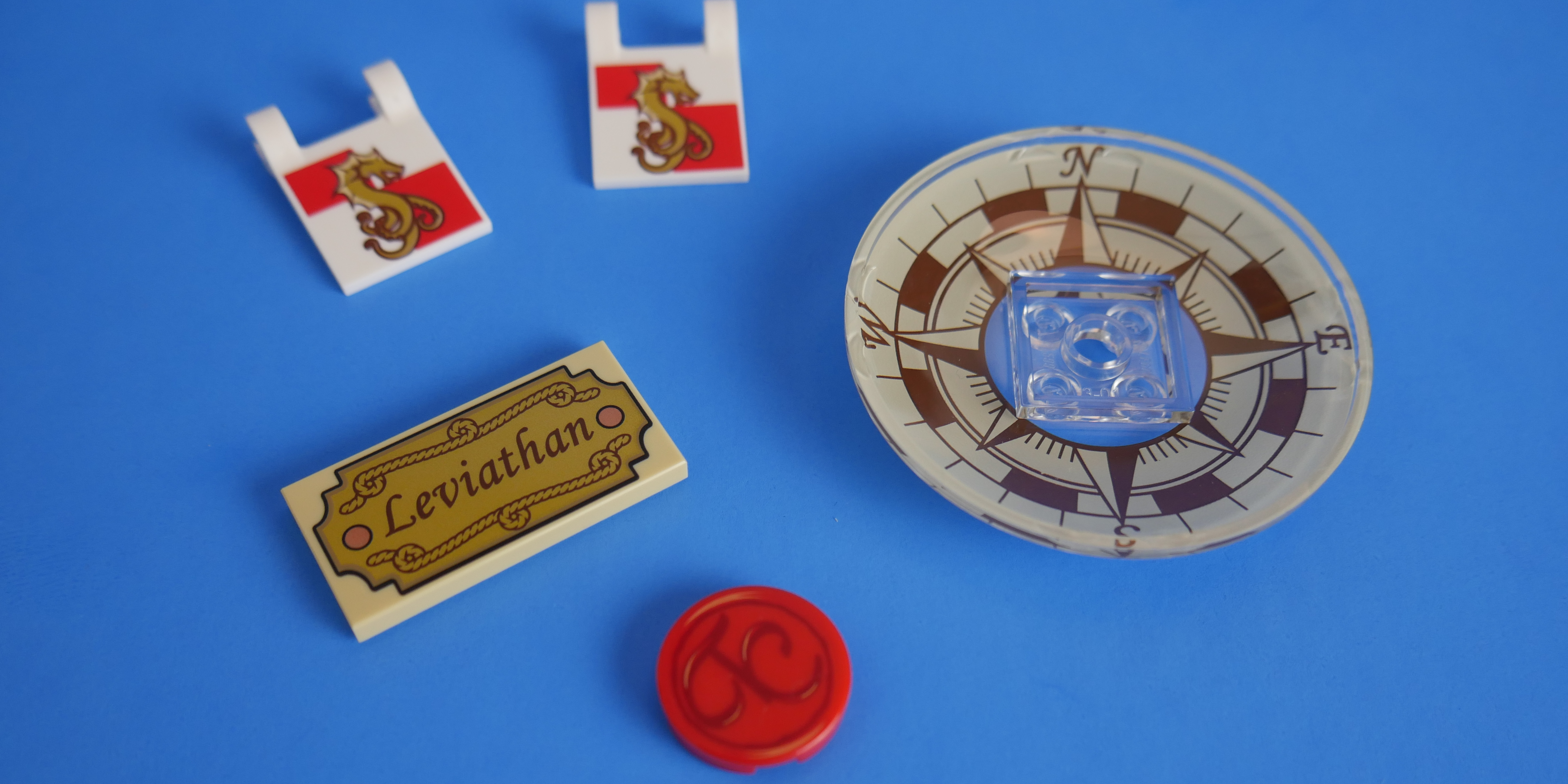 Aside from overall build quality, the Ship in a Bottle also shines thanks to its inclusion of rare, printed and exclusive pieces. In the printed department you’ll find a gold nameplate bearing the name Leviathan, a wax seal, and compass and finally the ship’s sails. Just about all of the other elements that make up the bottle are worth highlighting as well, with the larger transparent pieces being uncommon in the past decade of LEGO kits.

Most of the kit is comprised of smaller elements, allowing it to still clock in at 12.2-inches in length despite its near 1000-piece part count. 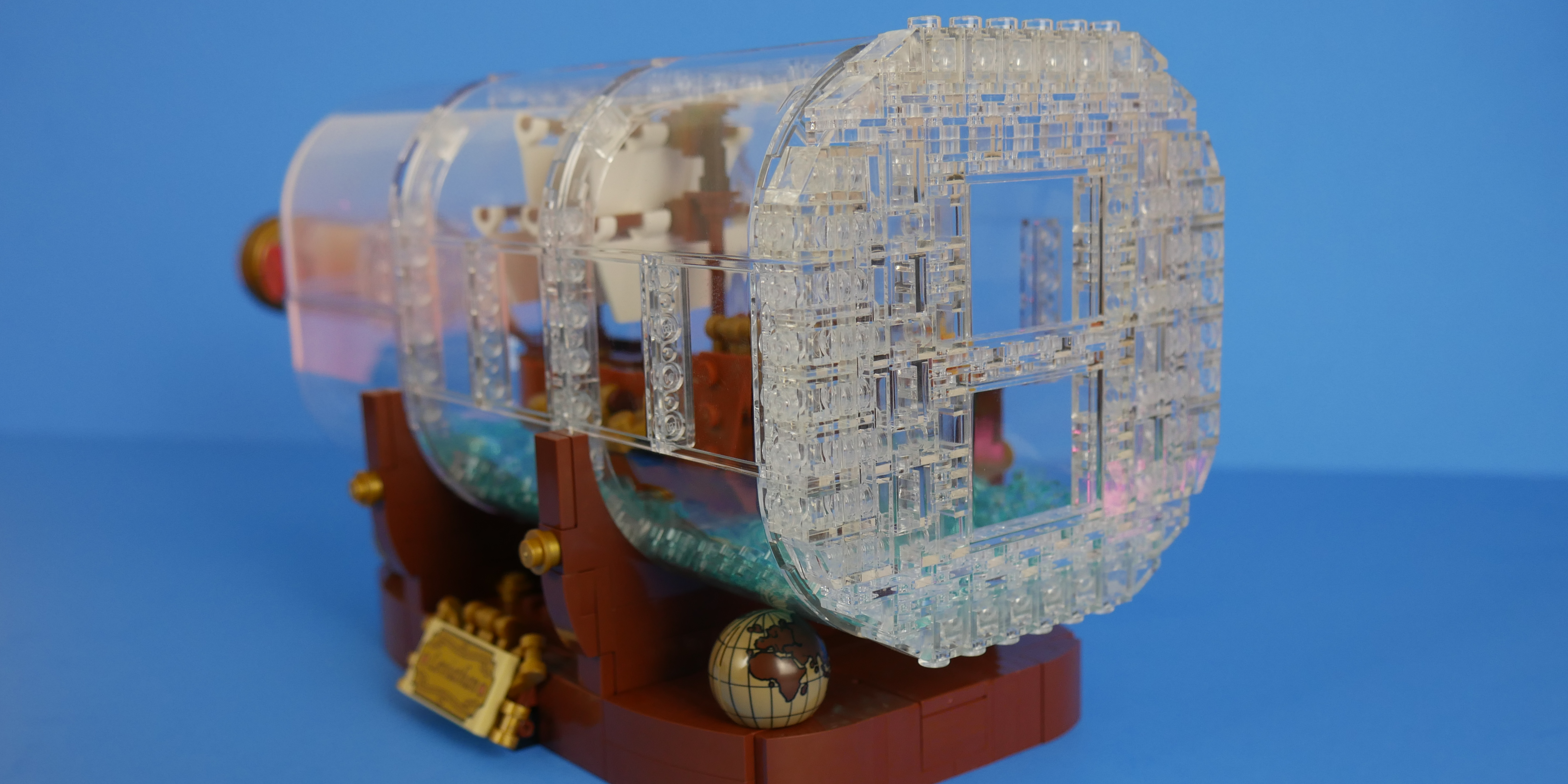 The Ship in a Bottle is a phenomenal set, but that doesn’t mean there isn’t entirely smooth sailing ahead. As mentioned earlier, the bottle pieces are prone to smudges directing assembly, which may be a unnecessary pain for some. It is also a more complex build than most, meaning it may be tricky for new LEGO builders to assemble.

Lastly, getting the ship into its bottle housing is a pretty tight fit. This isn’t necessarily a negative, but it is an awkward aspect of the build that I can’t help but feel like could have been avoided. Maybe that’s what they were going for given this is a ship in a bottle, but with how the rest of the set played out, it doesn’t seem intentional. 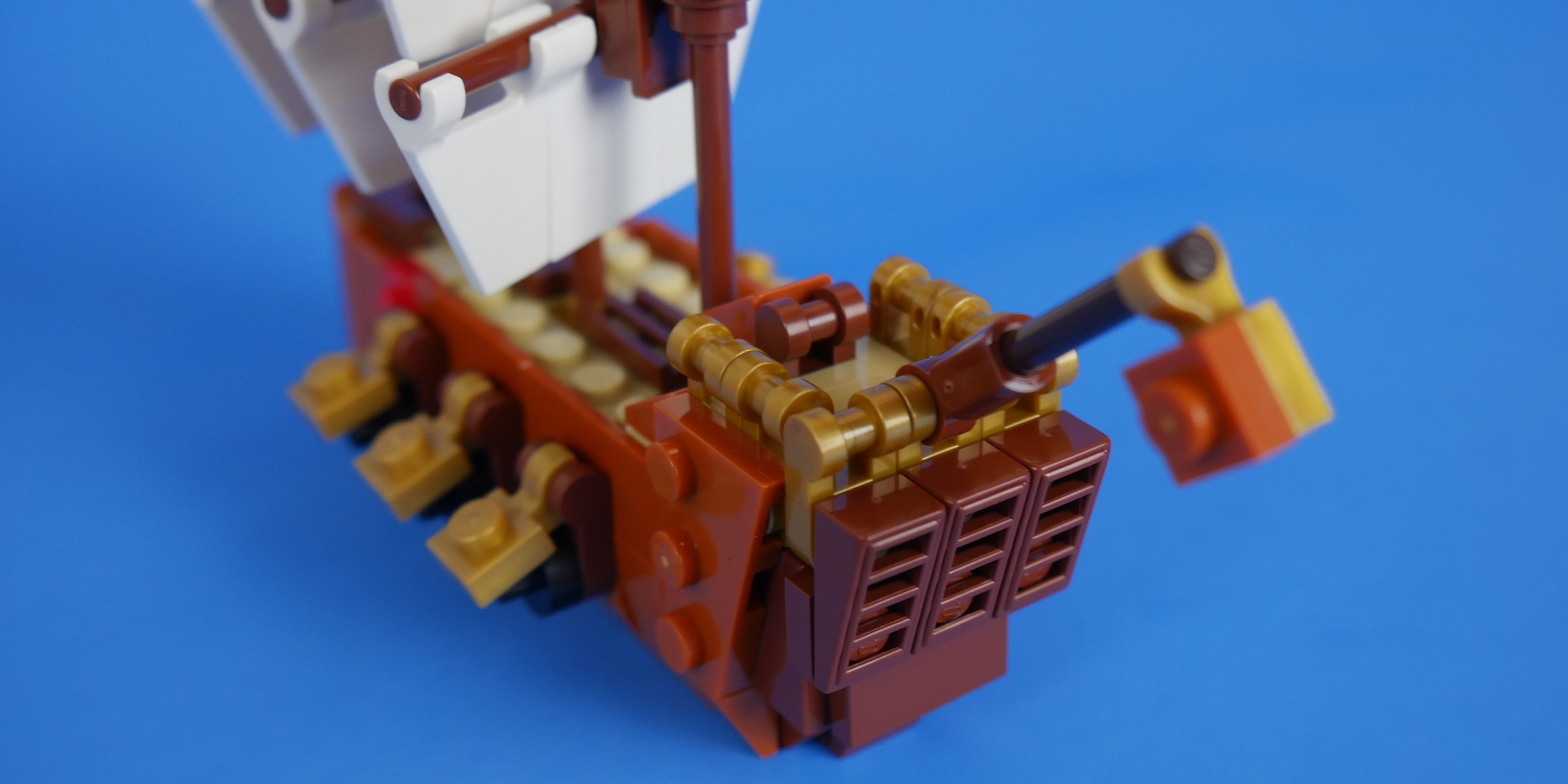 LEGO’s Ship in a Bottle is first and foremost is a display piece. If you’re looking for a kit to withstand the rigors of play, this certainly isn’t it. And that’s completely okay. In fact, LEGO going all-in on the display-worthiness aspect has created a truly unique and must-have set for older fans and collectors. Don’t get me wrong, I love a good, sturdy kit that can survive a few swooshes, but LEGO has made something really special here.

That combined with its 962-piece part count make it a bargain at the set’s $70 price tag. In the past, I’ve deemed other LEGO kits to be a great addition to one’s collection, but with the Ship in a Bottle, that sentiment has been taken to a whole new level. 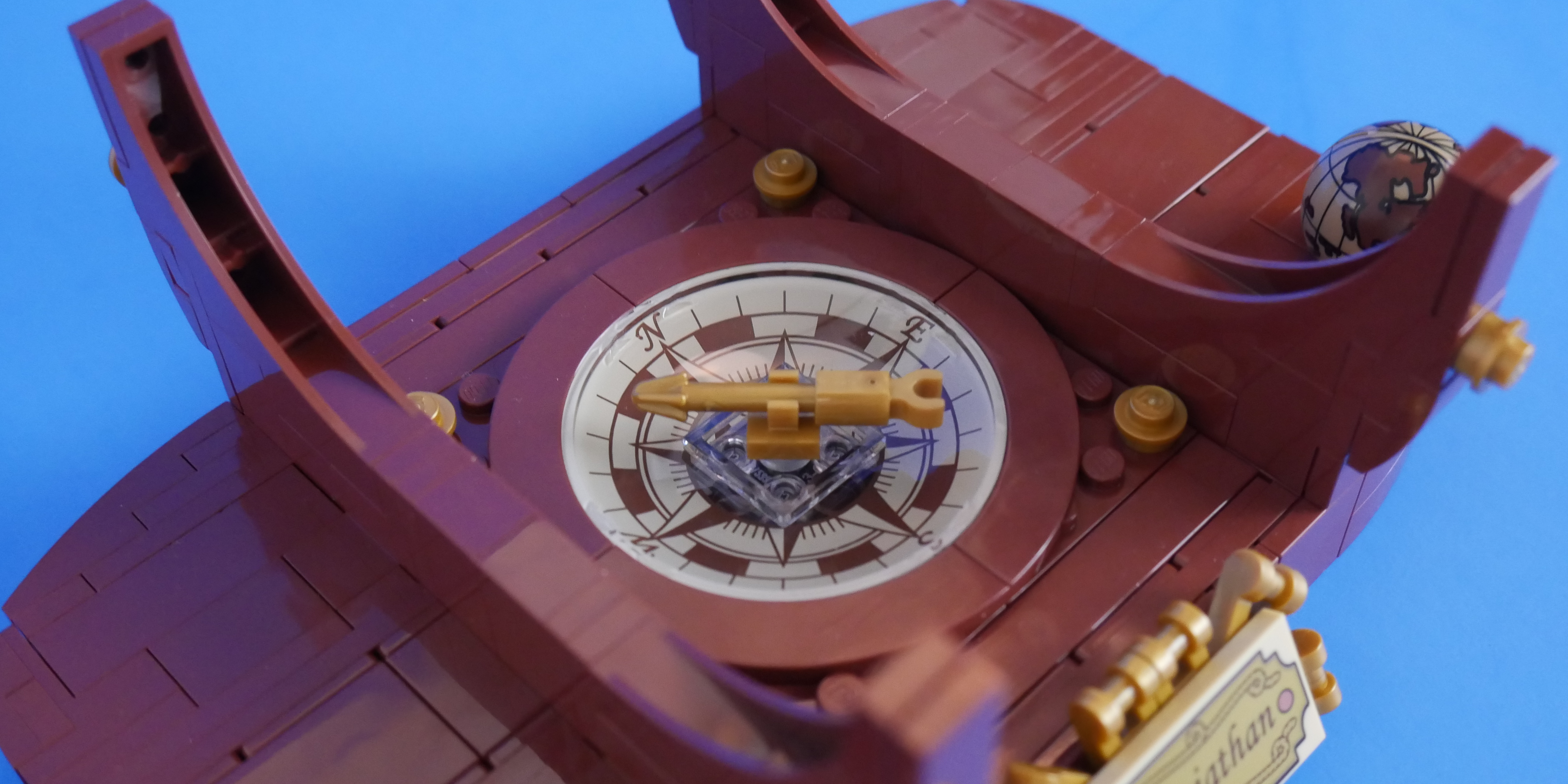 If there were any set I’d recommend to both fans of LEGO and not, this would certainly be it. Not only is this a build which LEGO collectors will certainly enjoy, but the kit also caters to a much wider audience than that. As a ship in a bottle, it’s just a really neat model to have, one that I can see just about anyone getting to adorn their shelves with. The Ship in a Bottle is a great conversation piece, and is sure to be enjoyed a wide range.

All things considered, LEGO Ideas’ Ship in a Bottle is a huge hit. It is a seriously impressive build in just about every facet, and brings some of the same wonder and amazement I experienced with the UCS Millennium Falcon down to a much more a affordable price point. Whether you’re a LEGO builder, boat fan or collector of interesting paraphernalia, the Ship in a Bottle is one kit that’s been christened for the high-seas