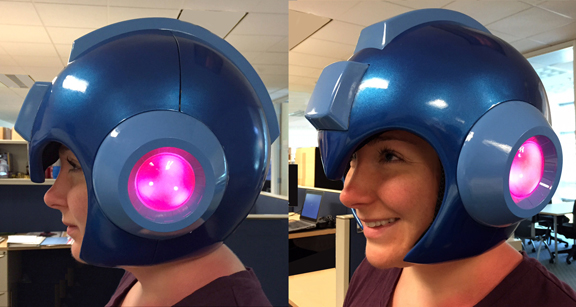 With a celebrated Super Smash Bros debut, a sold-out Nintendo amiibo, and a possible spin-off in the works, Mega Man and his fans have had a good 12 months—but this full size, wearable Mega Man helmet takes the cake.

Capcom announced this incredible helmet will be making its debut at this year’s San Diego Comic Con. Although a pre-order date has not yet been announced, the helmet will be available in limited quantities for purchase exclusively through the Capcom Mega store.

Made of high quality ABS plastic with a high polish finish, authentic proportions and details, plus working LED lights! A unique clamshell hinge allows the front and back half of the helmet to easily open up to comfortably fit your head inside the soft padded interior for a perfect fit.

Pricing info has not yet been released.

In November 2014, Mega Man made his debut in the highly rated Super Smash Bros for Wii U. The official Mega Man amiibo, released February 20, sold out immediately and has only re-appeared in stores and online a few times since then. Compared to many of the other Super Smash Bros Nintendo amiibos, Mega Man is a perfect likeness of his digital counterpart. If you can’t wait to get your hands on this guy, head over to Amazon. Prices fluctuate, but a Mega Man amiibo will generally run about $20 + shipping.