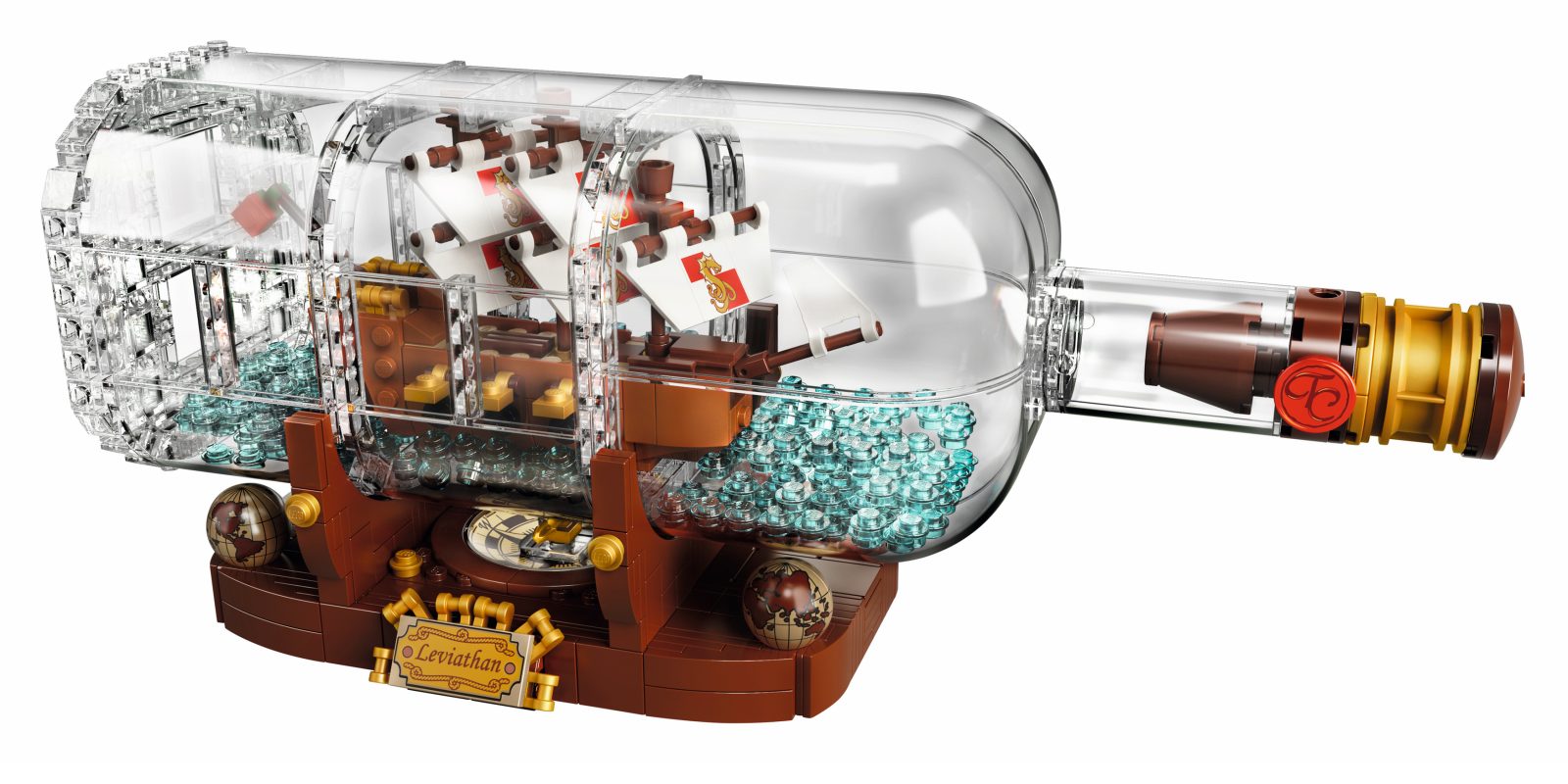 Update 2/1: The LEGO Ideas Ship in a Bottle set is now on sale directly from LEGO for $69.99 shipped!

LEGO Ideas has brought us some of our favorite sets in recent memory, but not every set submitted earns the glory of someday adorning store shelves. However as we covered way back in August, a new set would be joining the lineup of successfully-crowdfunded kits. And after teasing the release on Twitter, today LEGO has officially announced that on February 1st, Ship in a Bottle will finally be available for purchase.

The new LEGO Ship in a Bottle stacks up to over 5-inches in length and 3-inches tall. Despite its smaller size, packs in a level of detail really unseen in other recent releases, especially at the $70 price point. Thanks to the 962-pieces which the model is comprised of, the new Ideas set manages to include many of the defining features from the original crowdfunded model, while also incorporating some much-loved additions

Back before its Ideas campaign, the Ship in a Bottle was created to bring back the age-old model-making tradition. Now thanks to its upcoming release, an entire new generation of makers will be able to get their hands on a brick-built version of the famous model.

And now that Ship in a Bottle is a bonafide LEGO kit, the professional builders behind the release have altered some of the original model. Not only was the ship redesigned for better stability, but additional details were added like interactive side-mounted cannon flaps, more distinct captain’s quarters and more. The build is all-in-all a bit smaller than the original model it was based on.

The bottle’s design was more drastically altered, which has resulted in a more uniform and bottle-like shape. LEGO designers have also taken the alteration as an opportunity to add in more eye-catching details. Unlike the original, you’ll now find a buildable cork alongside a wax emblem element sealing off the bottle as well as a detailed compass on the display stand. Other details include a nameplate, globe elements and tons of gold accenting. 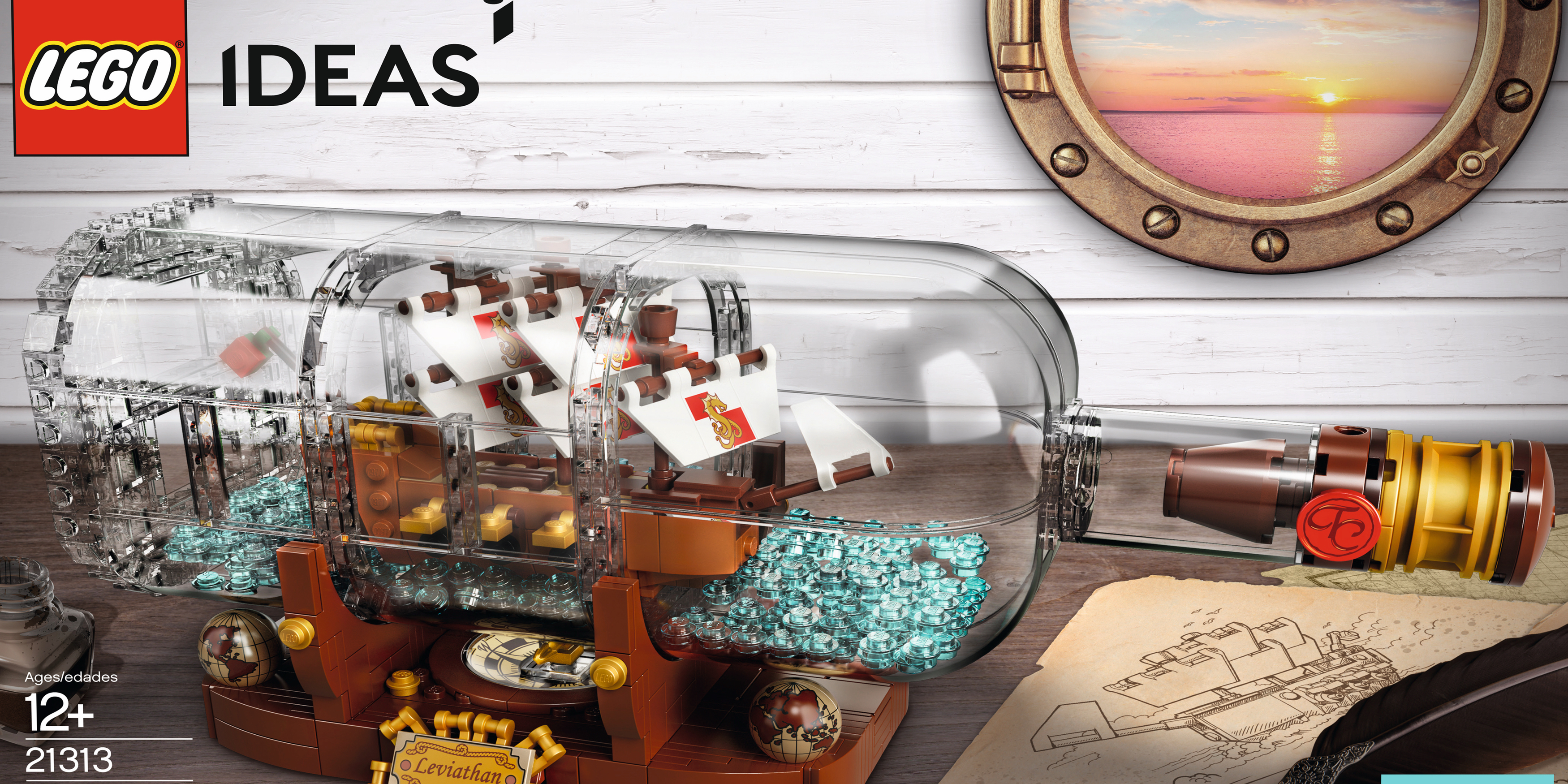 LEGO’s latest Ideas release will be joining previous kits both online and on store shelves come the start of next month on February 1st. The newly-christened set will retail for $69.99 and with its almost 1,000 pieces, is a very well-priced model. Ship in a Bottle looks to be one of the most unique sets released in recent years and is sure to be a delight for both young fans and collectors alike, even more-so than many of the sets we saw back in 2017. I can’t want to get my hands on the model, so expect a hands-on review in the near future.

Build and display a classic LEGO® Ideas Ship in a Bottle, featuring a highly detailed ship with the captain’s quarters, cannons, masts, crow’s nest, flag and printed sail elements. Place the ship inside the LEGO brick-built bottle with a buildable cork, wax seal element and water-style elements inside, then showcase it on the display stand featuring the ship’s ‘Leviathan’ nameplate, globe elements and a built-in ‘compass’ (non-functioning) with compass rose and spinning needle. This wonderfully nostalgic construction toy also includes a booklet about the set’s fan creator and LEGO designers.