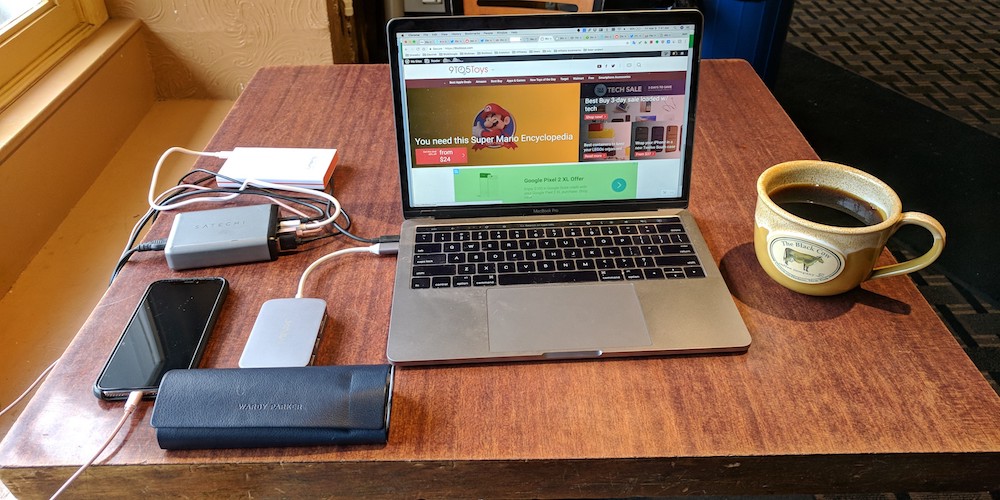 Behind the Screens is a weekly 9to5Toys series that takes you through our writers’ setups, be it mobile, desktop, gaming or home theater. Next up is Seth Weintraub, Publisher of the 9to5 Network.

Running the vast 9to5 media empire from home certainly can have its advantages but if I spend my whole day in my office, I go a little insane. That’s why I break up my day with some time at the local coffee shop. I usually drop in after driving my kid to school or a little electric bike ride and spend about 2 hours (usually 7:30-9:30am-ish) knocking out emails, Slack, Twitter, light image and video editing and starting some writing. Head below for a look at my mobile setup…

I currently own a 13-inch MacBook Pro with Touch Bar that I got right after launch in Space Gray as my hub. Originally, I would plug it into a dock at home which I feel justified the “Pro” aspect because I rarely did much video or photo editing on it. However, I recently got a 27-inch iMac at home so the MacBook Pro is a little overkill. I may trade down to a lighter MacBook and reluctantly lose that one-inch of screen space and power. My thoughts on this Pro model are here.

You don’t see them above because I’m wearing them but my go to headphones are the Bose QC35s IIs. The noise-cancelation eliminates the excess coffee shop noise when I’m trying to concentrate and connects seamlessly to my two phones and MacBook over Bluetooth LE. Music also sounds great and they are super durable. Not cheap at $349 (get the previous model for $329) but there are sometimes sales at 9to5Toys, so keep it locked. 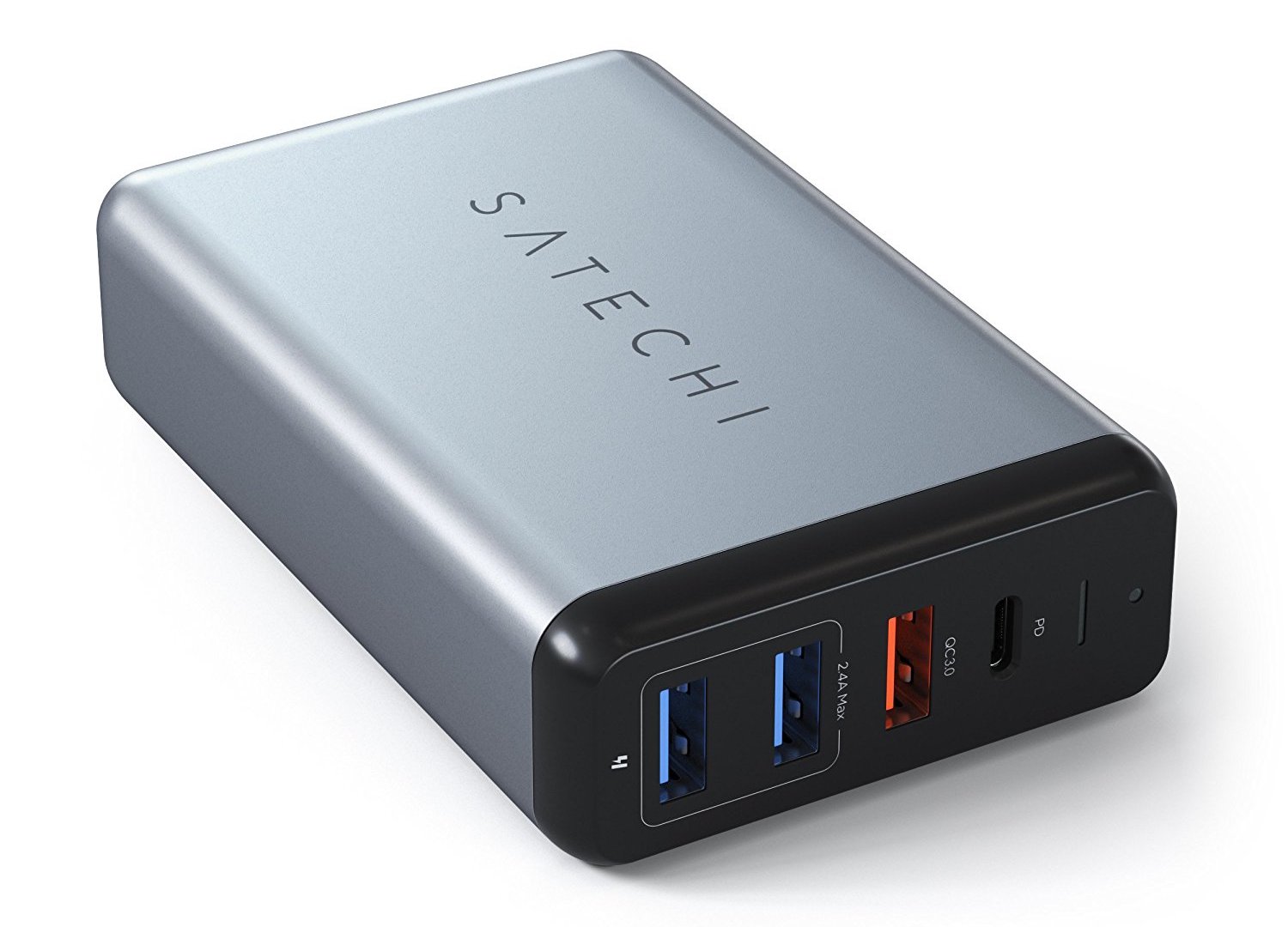 Rather than have a spider web of chargers for Mac, iPhone, Android phone and headphones, I picked up the Satechi 75W USB-C PD Travel Charger ($60). Not only does it quickly charge my MacBook Pro with 60W dedicated but also quickly powers my iPhone, Pixel and headphones without overheating.

When I need more legacy ports, mostly for editing camera or drone footage, I use the MINIX NEO C-X, USB-C Multiport Adapter with HDMI – Space Gray [10/100Mbps Ethernet] which is also $60. I had been using the more portable HyperDrive ($80) but found I would need Ethernet occasionally which Hyper lacks.

As for phones, I have an iPhone X and Google Pixel XL. No surprise there since I split my time between Apple and Google ecosystems. I use a $14 Caseology Case on the Pixel XL and a 12 South Relaxed Leather Case on the iPhone X.

Everyone needs a portable drone these days and mine is currently the DJI Spark (review). At around $300, it was 9to5Toys Toy of the Year in 2017 and it folds easily into my bag. It is about the same size as my Bose QC35s (below) yet takes solid 1080P footage and can even be flown without a controller.

That’s usually my setup. Below is a look from another day mid-work. Don’t forget the Black Cow Coffee. 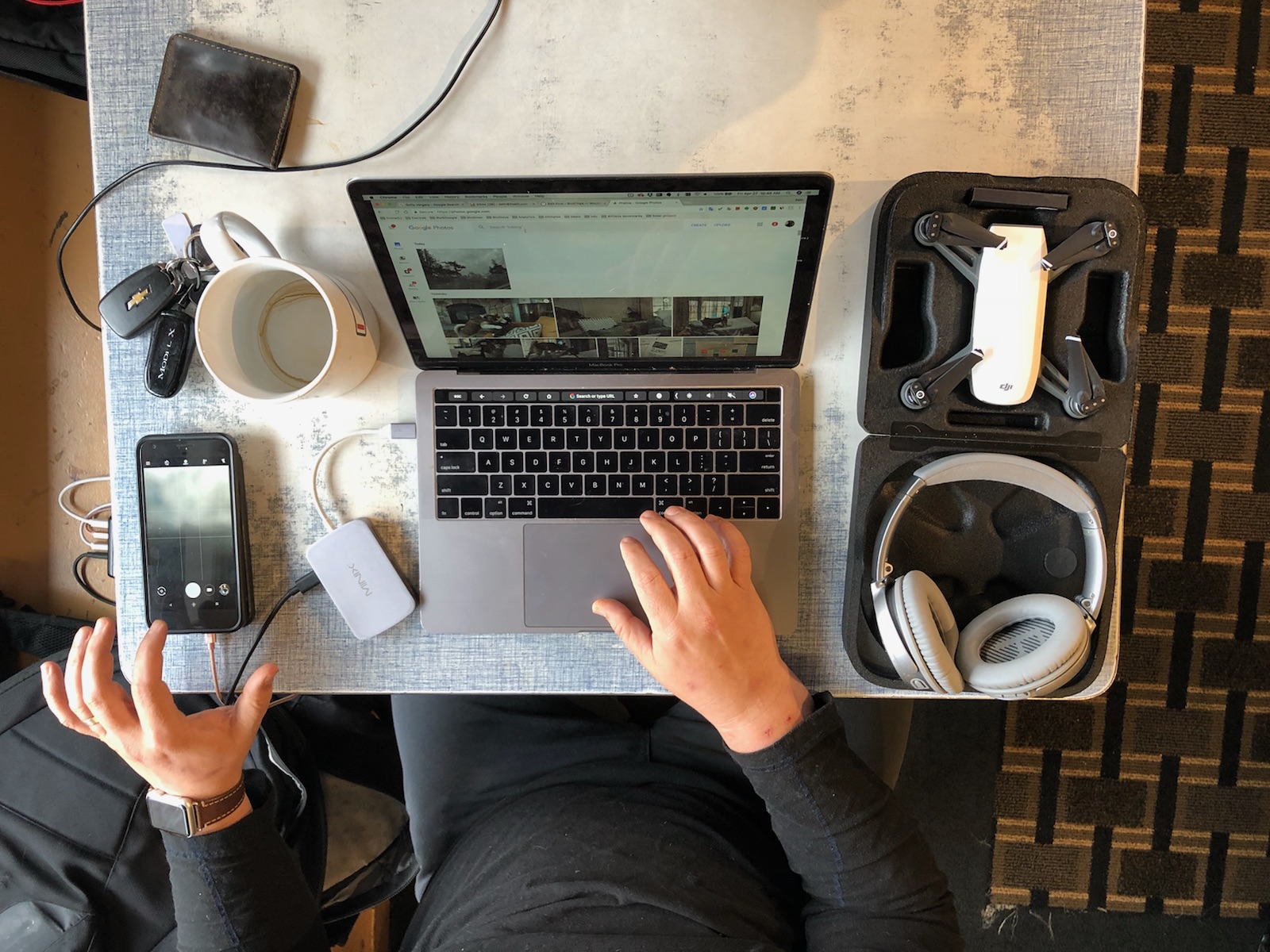