Behind the Screens: Zac Hall’s blogging and podcasting workstation 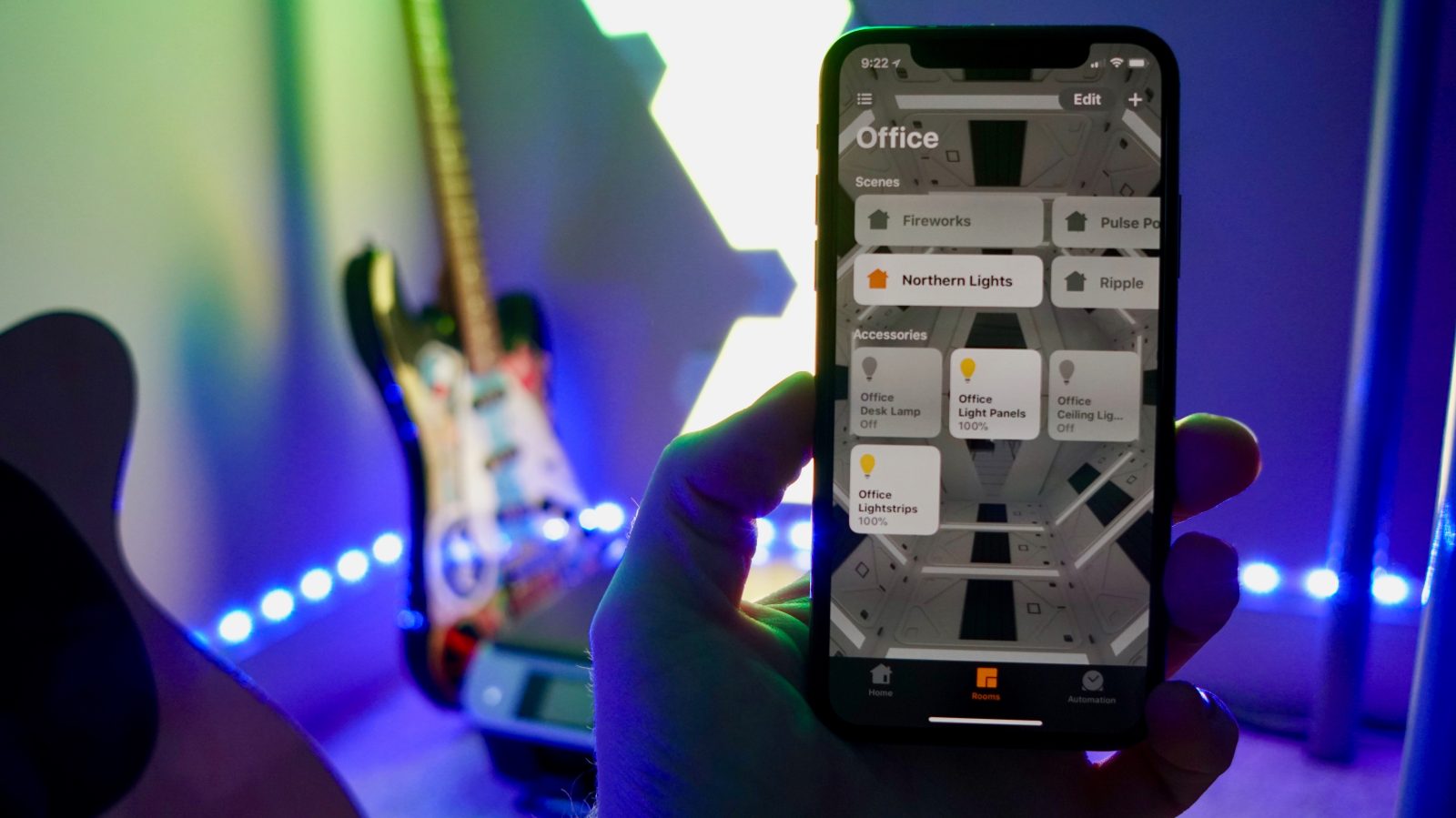 Behind the Screens is a new weekly 9to5Toys series that takes you through our writers’ setups, be it mobile, desktop, gaming or home theater. Next up is Zac Hall, 9to5Mac editor and 9to5Mac Daily & Happy Hour podcast host.

My workstation has dramatically evolved since I joined 9to5Mac in 2013. I started with a 2012 Mac mini and a 1080p Dell display on a narrow computer desk in the corner of my bedroom.

This was fine for a while, but a comfortable workstation that fits your needs and personality is essential to making working from home work for you. I’ve since been fortunate enough to graduate from a makeshift workstation in my bedroom to a dedicated home office that starts with two 27-inch 5K displays…

I currently work primarily on the latest 27-inch iMac 5K released last summer — the one with a 3.5 GHz Intel Core i5 and a 1TB Fusion Drive — but I upped the 8GB of RAM to an overkill amount of 40GB with a 32GB upgrade pack from OWC. Swapping the RAM in this Mac is a super easy process and alleviated a serious speed bottleneck for me.

I appreciate that the iMac 5K has both USB-A (four ports) and USB-C/Thunderbolt 3 (two ports), and I use one of those Thunderbolt 3 ports to connect my 27-inch LG UltraFine 5K Display to extend my desktop. I love being able to fling an app to the second display or keep apps like Tweetbot, TweetDeck, and Reeder updating in real-time on their own high-resolution display. The second display also includes additional USB-C ports which comes in handy. 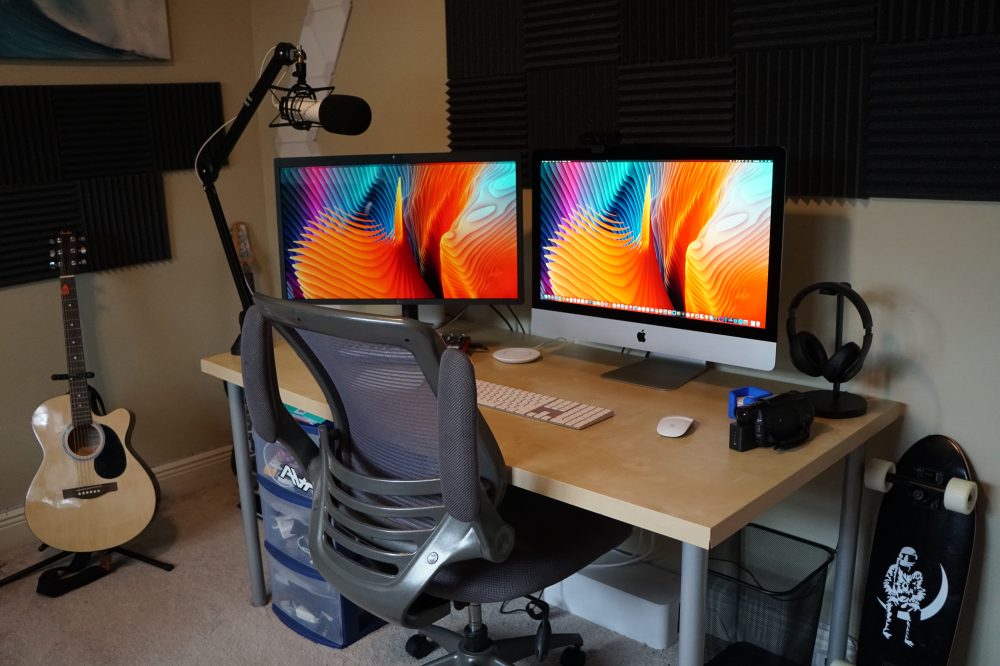 My peripheral choice is straightforward: Magic Trackpad 2, Magic Keyboard with Numeric Keypad, and Magic Mouse 2. Having the trackpad for swiping and zooming around images and audio edits is convenient, but I primarily use the mouse for more control and precision. As for the extended keyboard, I generally like the weight and sturdiness of the heftier keyboard.

This setup also includes three webcams. The iMac has a subpar 720p camera while the LG display has a superior 1080p camera similar to the $5000 iMac Pro’s camera. 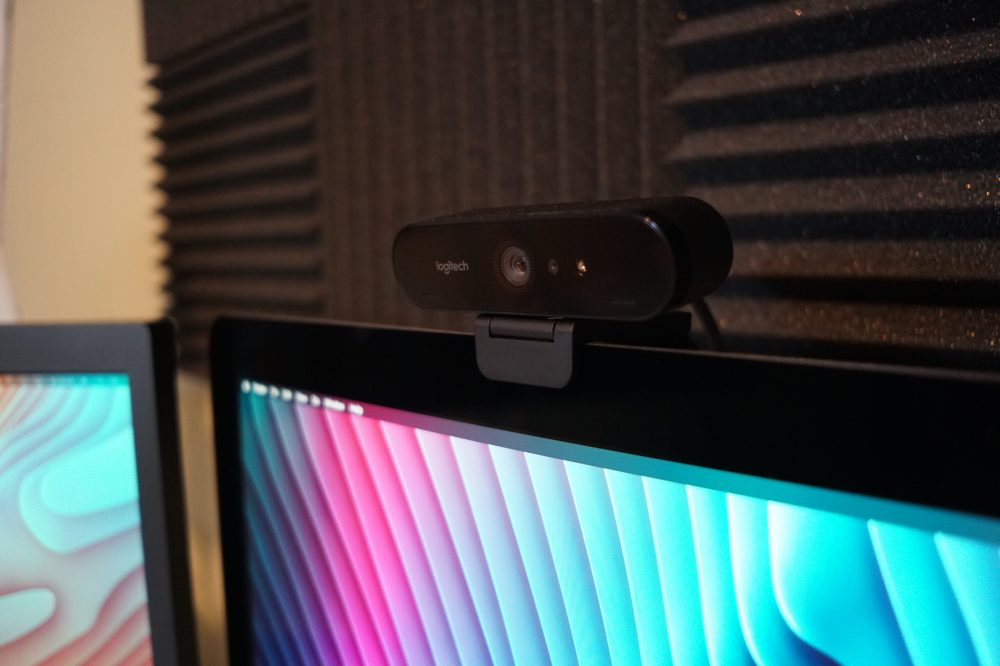 I recently added an even better webcam, however, with the Logitech Brio 4K which captures ultra HD video with HDR color. I like being able to move the webcam around as needed, and the Logitech solution includes an app that lets you configure how wide and how focused the shot is.

Check out the differences as captured in Photo Booth:

If you count the 480p webcam on my 12-inch MacBook that I use for travel, the webcam resolution range is rather entertaining. 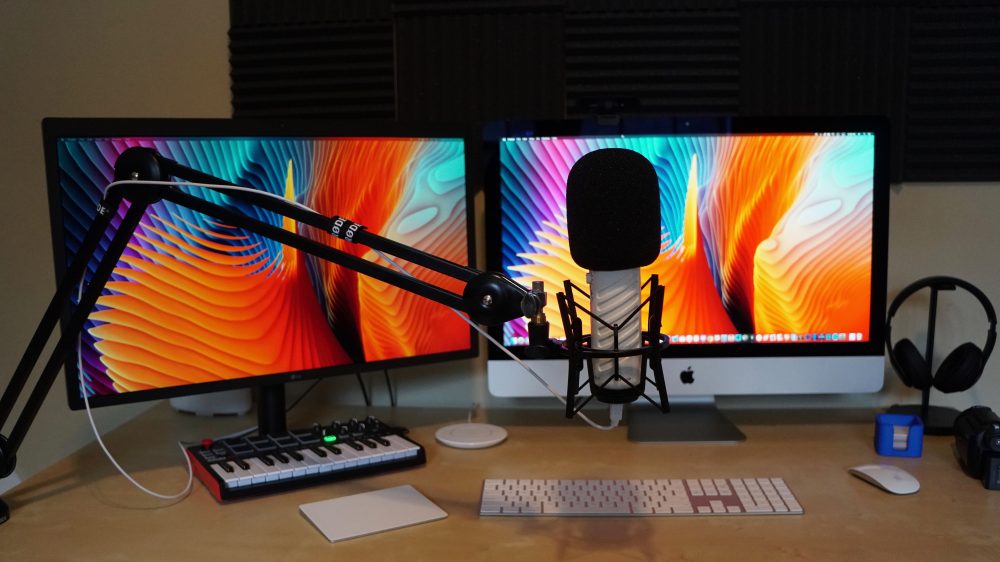 For podcasting, I’ve long relied on the Rode Podcaster USB microphone for 9to5Mac Happy Hour and now 9to5Mac Daily. I recently transitioned from a clunky fixed stand to Rode’s desk mounted arm, which was a major upgrade for me.

The room does create an echo and reverb effect that aren’t ideal for podcasting, however, so I’ve lined areas of the walls where I record with acoustic studio foam. It’s cheap, effective, and to me just looks cool so I may have gone a little overboard with it. 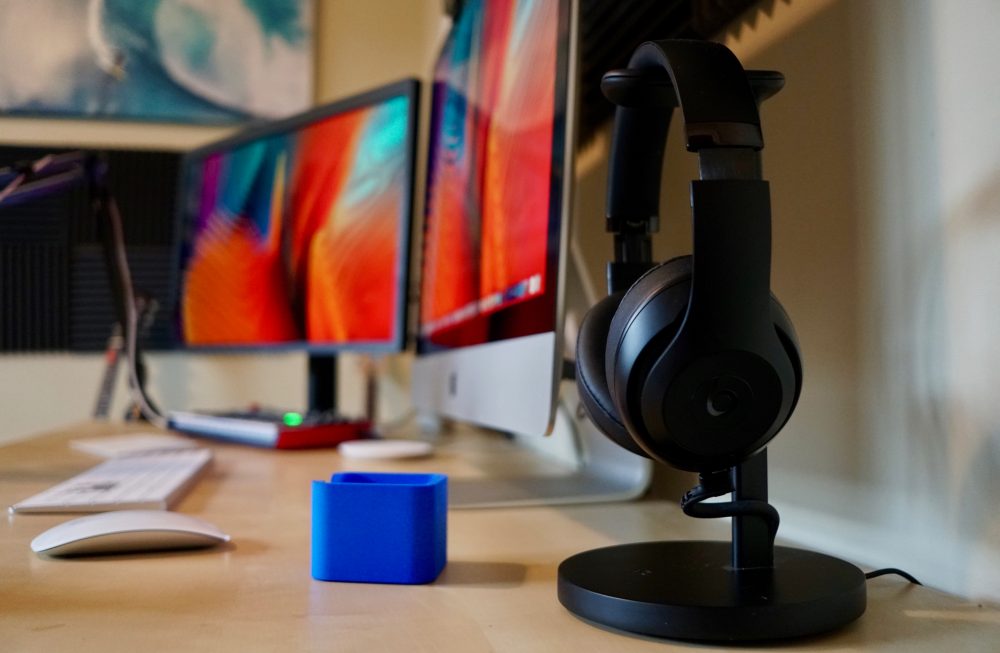 A few other goodies on my desk include the recently released Beats Studio 3 Wireless headphones which sit on TwelveSouth’s clever Fermata headphone stand with an integrated charging cable, a Sony a6500 mirrorless camera for still shots, and a Sony FDR-AX53 4K video camera for future video plans and capturing my 5-month-old’s milestones.

There’s also a wireless charging pad from Belkin that charges my iPhone X, an AKAI MPK Mini mkII 25-Key USB MIDI/Pad Controller, a Netgear Orbi Satellite which I love for its LAN ports, and a 3D-printed replica of the Things task manager app icon filled with origami paper to keep me motivated.

It all sits on a simple Linnmon table from IKEA that reminds me of the Apple Store tables. My chair is a run-of-the-mill pick from Office Depot, but I’m highly considering investing in a fancy ergonomic solution this year.

As for the rest of my office, there are a few goodies throughout that make it feel more like my own.

A set of Nanoleaf Light Panels covers the corner wall behind my desk an creates an ambient experience with impressive lighting effects. The ceiling light is connected to a Lutron wall dimmer switch, a second desk behind mine includes a lamp with a colored Hue bulb, and Hue light strips line the baseboard on three walls. All of the lighting connects to Apple HomeKit for Siri control. 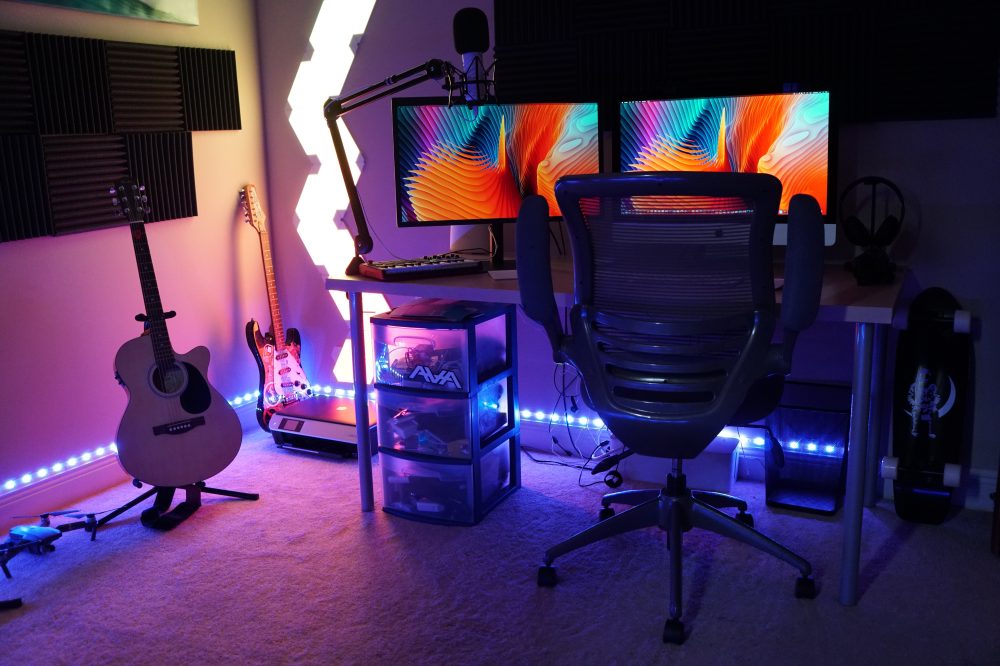 I also have two Sonos Play:5 speakers in a stereo setup in the corners behind my desk. This is definitely overkill for a room this size, but I like the high-quality, high-volume music playback experience when I’m working home alone.

The second desk also includes a Logitech Base that I primarily use for charging my iPad Pro, a Kindle for reading Instapaper, a Google Home for testing, a new Amazon Echo for voice control and testing, and a couple of Spheros from Star Wars including BB-8 and BB-E9. 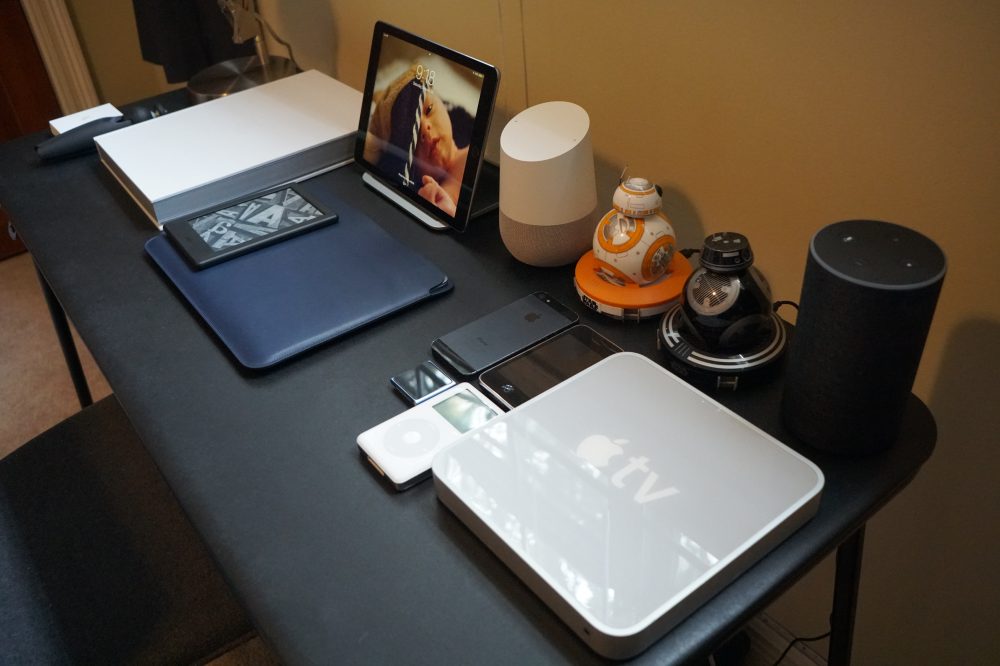 There’s also a few Apple collectibles like the smaller version of the Apple design book, a working iPod Hi-Fi, and a few old iPhones and iPods.

Wall art from the French Quarter in New Orleans (and the frame section at Bed, Bath & Beyond) help make my office feel more personal, and my small guitar collection and skateboard serve to keep me balanced.

I plan to add a HomePod as soon as its released and likely relocate the Sonos Play:5 stereo setup to a larger room in the house. I’d also like to replace the second desk with another table from IKEA, although shipping for the one I want is around $350 which was definitely not the case when I bought my original desk — I’ll likely save that purchase for a future road trip.

Aside from an office HomePod, a chair upgrade, and a better second desk, I’d love to have a HomeKit-compatible solution for controlling shades over the windows. That’s when my workspace will really feel complete. (Oh, and also a little more cable management obviously although I need things to be a bit more permanent before I start strapping cables together more.)