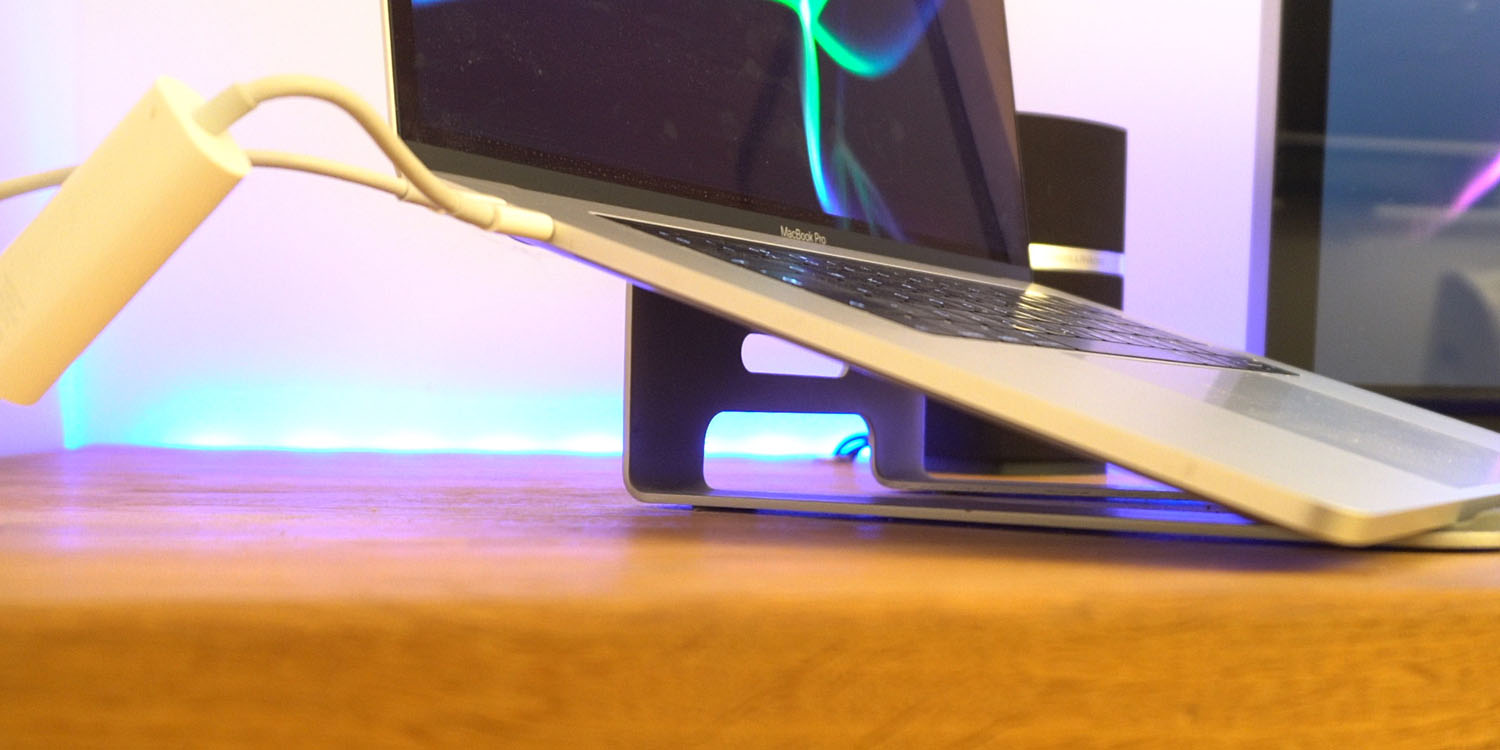 Behind the Screens is a weekly 9to5Toys series that takes you through our writers’ setups, be it mobile, desktop, gaming or home theater. Next up is Ben Lovejoy, EU editor at 9to5Mac.

As someone whose tastes run to minimalism, I wanted the neatest, least-cluttered desk I could achieve – consistent with the tech needed for my work.

If you love technology but hate clutter, wires are your constant foe! I tried various cable-management approaches before finally deciding the only way to do it properly was with a bespoke desk.

My key aim was to have visible wires be as few and as short as possible. The idea was to have wires disappear immediately out of sight beneath the desk …

I started out by mapping out exactly what tech I wanted where on my desk. I drew up a diagram, with holes for cables in the appropriate places, and channels beneath the desk to run the cables to their power bricks, USB hub or monitor as appropriate.

I love natural wood, so I bought a thick oak kitchen worktop – then threw both that and my diagram at a multi-talented friend who kindly agreed to build it for me.

Let’s start with a video of my setup:

So, let’s talk through the various elements seen there …

The heart of my setup is a fully maxed-out 2016 15-inch MacBook Pro with Touch Bar.

I previously had the last of the 17-inch MacBook Pro machines. I adored the screen size, but eventually had to bite the bullet and upgrade.

The 2016 range proved the perfect time to do so. Much as I loved the 17-inch machine, and did travel with it, there were times when I did want something more portable. I thus had an 11-inch MacBook Air as a second machine – but the 15-inch is sufficiently portable that it does the job of both.

I usually keep my Macs for 4-5 years, so my philosophy is to max them out at purchase in order to maximise their longevity. I must say that the eye-watering price of the 2016 MBP range did give me pause, especially adding in the cost of the 2TB SSD. But my Mac is my most important piece of technology, and it’s the tool on which I earn my living, so in the end I went for it.

On my desk, the Mac serves as a second monitor, usually used for the Slack chatroom used to keep in touch with the other writers during the working day.

The Mac sits on a Twelve South Parc Slope stand, which brings the middle of the screen in line with the centre of the main monitor.

I’m still using a relatively old monitor because my ideal monitor doesn’t yet seem to exist. Here’s what I wrote just over a year ago about what I’d really love:

In the meantime, the ATD 27 is still a good monitor so I’m not too impatient about replacing it.

I always used to love long-travel mechanical keyboards. The original IBM PC keyboard was my favorite.

But I’m a laptop guy, and switching back and forth between a mechanical desktop keyboard and Apple’s chicklet keyboards was too confusing to my fingers, so I bit the bullet and switched to Apple’s Magic Keyboard.

I greatly prefer trackpads to mice, so have this paired with an Apple Magic Trackpad.

My speakers are Bowers & Wilkins MM-1. I’ll be the first to admit that the volume these pump out is total over-kill for speakers used only at my desk, but I adore the sound quality – and they look great too.

My headphones are also Bowers & Wilkins: the P5 Wireless. These are fantastic quality on-ear headphones which are also really comfortable. The folding design makes them very practical too – they slip easily into a bag.

I previously had the wired version, but decided to try out the wireless ones when Apple launched the iPhone 7 without a headphone jack. I was sticking with my then iPhone SE at the time, but it was clear that my next iPhone would require wireless headphones, so I opted to try them ahead go time. I found them every bit as good as the wired one, and was an instant convert to wireless – though I do love the fact that you get a wire too in the box so don’t have to worry about the batteries running out.

However, when the iPhone X was launched, all that shiny new tech was impossible to resist. It really does have that ‘single slab of glass look,’ and I adore Face ID – it’s just such a seamless way to do things like open banking apps. The screen is fantastic, the camera likewise. I love this phone.

As I sometimes use the phone to shoot 4K video, and expect to do more of this, I opted for the 256GB model.

I like to keep my phone at a comfortable viewing angle on my desk, so use a wireless charging stand rather than a flat mat. I got a set of Cheotech Qi stands. These are very clean-looking, the iPhone X screen and charging stand blending together very nicely. I like the long LED that changes from blue to green when charging, and at $20 each I got three, for office, bedroom and living area.

In theory, I upgrade my iPads every 2-3 years, but lately Apple seems to be persuading me to do so annually.

I used to have the 9.7-inch iPad Pro. I tried out the 12.9-inch one, but that was a bit too big for things like reading in bed, so I stuck with the smaller model.

But when Apple launched the 10.5-inch version, that bit of extra real estate made a bigger difference than I expected, so I dutifully handed over my cash. I have to say that this has turned out to be my Goldilocks iPad: not too big, not too small, just right.

I have the cellular model, as the iPad is my go-to mobile device.

I live a paperless life, so any paper that arrives on my desk is immediately scanned and then thrown away or shredded as appropriate.

If you currently have a filing cabinet bulging with paper, I can’t tell you what a liberating experience it is to get rid of it – not to mention recovering the space it takes up.

I borrowed a sheet-fed scanner for the initial job of scanning all the accumulated papers that were still relevant, but because I minimize the amount of paper coming in, and scan things right away, this ultra-compact model (or updated version) is perfect.

My product photos and videos are shot on a Sony a6300 camera. This is a mirrorless interchangeable lens camera that supports 4K video. It sits on a Manfrotto Befree carbon fibre tripod.

It’s so good that I actually now use it as my travel camera now, taking over the duties that used to be performed by my Nikon D3.

When I upgraded to the 2016 MacBook Pro, I needed to swap my cables for USB-C versions.

But I did have a few devices with hardwired USB cables, so for those I have a really neat Satechi hub that provides pass-through USB-C, two USB 3.0 ports and microSD and standard SD card slots.

For narrating videos like the one above, I use this Blue Snowball mic. It was recommended to me as the best bang for the buck before you end up in expensive pro audio territory.

Our entire apartment uses Philips Hue lighting for HomeKit control and mood lighting. We use a mix of bulbs and Light Strips. In my office, there is one at the rear of my desk, while we also have them for kitchen cabinet under-lighting, wardrobe lighting and bookshelves.

Also throughout the apartment are iPhone-controlled blinds. Lutron are the only HomeKit-compatible ones we found right now, but these are crazily expensive for the number of floor-to-ceiling windows we have. So we opted for Luxaflex Duette (marketed as Hunter Douglas Duette in the US), which support scenes and have HomeKit support on the way.

In the office, there’s just one normal window, and I have scenes to open the blinds in the morning, close them at night and set them partially open when the sun is too bright during the day.

The custom desk I had built has been a learning process. There are things I’d do differently next time, in particular having the rear under-shelf be deeper and set lower down to allow more room for tall power-bricks like Mac ones.

It was also built to fit the office in my previous home, and is a little too wide here. So I’ll be asking our handyman to build me a new one, and for this I’ll probably opt for a dark wood to match the floor.

At some point, someone will make a monitor that matches my desired specs. Finally, as I get more into video, I will probably end up upgrading my camera. The Sony A7R III with 24-70/f2.8 lens seems to be the kit of choice at present, but I can’t justify that kind of money until I’m shooting a lot more video – and my skill-level is commensurate with the kit. I’m an experienced stills photographer, but very much a novice where video is concerned.

Plus regular Apple kit upgrades, of course! I plan to keep my Mac another 2-3 years. My iPhone probably two years. I’m sure the next iPad Pro models will have Face ID, and that will definitely be enough for me to upgrade. But that’s a hazard of being an Apple-focused tech writer.

Do share details of your own setups in the comments!