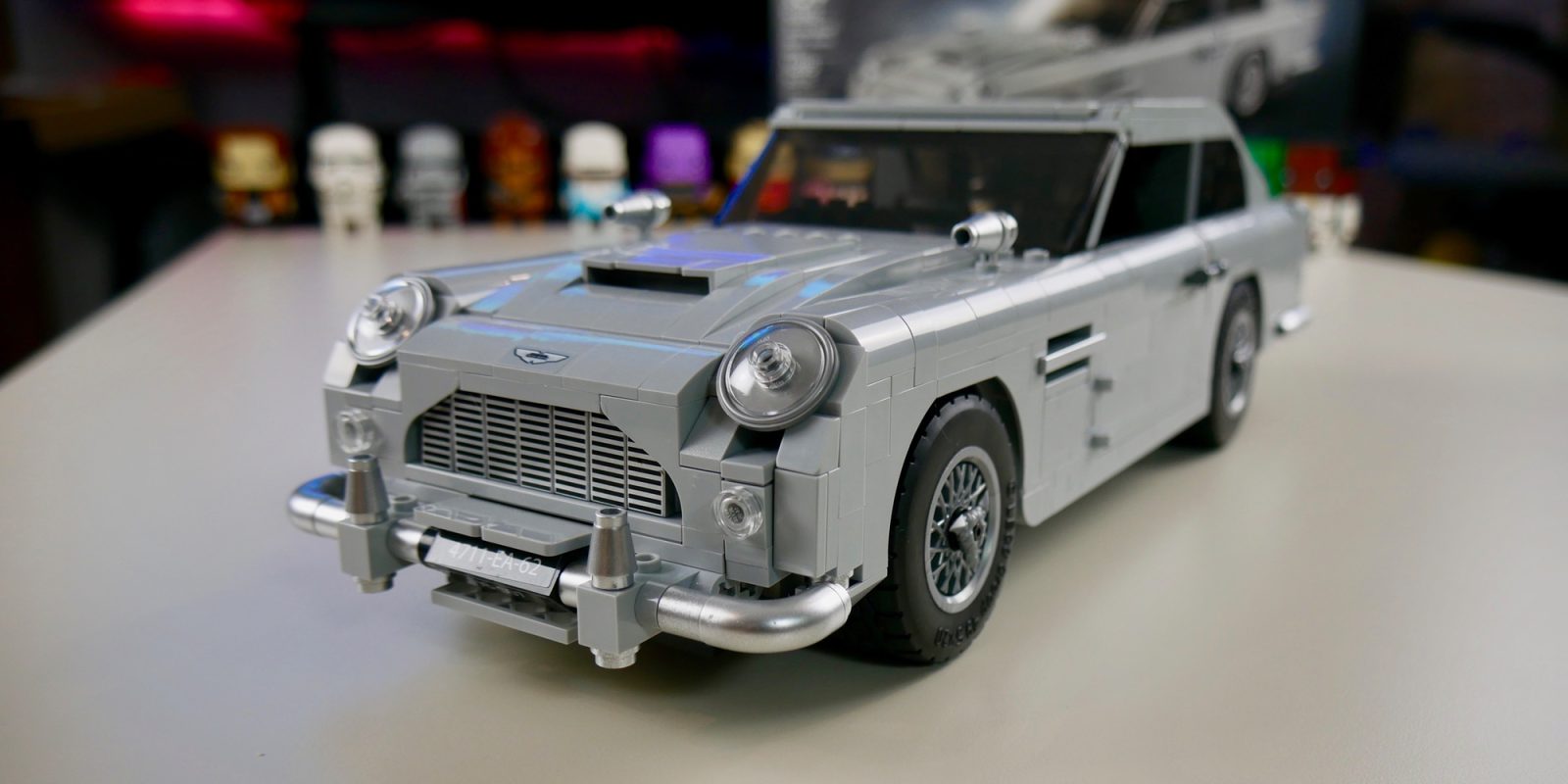 In the past few years of LEGO releases, the company’s lineup has been defined by a two-fold focus: releasing larger, more part-intensive kits packed with eye-catching details alongside expanding its lineup of offerings by bringing in as many partnerships with existing IPs as possible. LEGO’s most recent release just so happens to fit into both categories, with the all-new Aston Martin DB5 packing many iconic features and details from the James Bond franchise, the first LEGO kit to tie in with the famous spy flicks.

As we reported last week, LEGO debuted its most recent kit in partnership with the British luxury sports car manufacturer, Aston Martin. Stacking up to just under 1,300 pieces, the 007-themed DB5 is sure to be one of this year’s must-have sets. Luckily we got our hands on it prior to widespread release and will be diving in to see if the brick-built recreation of the iconic ride stacks up to a gadget worthy of the famous secret agent or if Q should have just left this one in the shop.

The newest addition to LEGO’s lineup joins its Creator Expert series, a selection of sets that have recently been shown its fair share of love. We’ve seen a fully-functional roller coaster, a stunning downtown dinner and more, just within the past several months.

At first glance, LEGO’s first recreation of any model Aston Martin looks to be your average car, that is if you can call the DB5 average. Sure it sports a sleek body design paired with chrome accents, but there’s very few giveaways to all of the features that LEGO has managed to cram into the sports car.

Every kit has compromises, be it play features for details or uncanny accuracy prioritized above all else. For the Aston Martin DB5, the set perfectly balances functionality with form to create a model that is equally worth admiring on your shelf or getting your hands on to show off standout features.

The DB5’s build is comprised of a nice mix of typical LEGO techniques alongside some more unique, advanced ones. Assembling the sports car is a fairly straightforward endeavor, although there are some steps that require a little bit of digression.

It always seems that no matter the release, LEGO gets chastised for debuting larger kits that are primarily comprised of grey bricks. At this point its almost a given each time around, and the Aston Martin is no exception. But so be it. A large portion of the kit’s nearly 1,300 pieces do in fact happen to be light grey, so if that’s a deterrent this kit might not be for you. Although that would mean missing out on one of LEGO’s most entertaining kits in a while.

This build starts by laying a base of both Technic and regular LEGO bricks, with much of the vehicle’s frame is centered around functionality that gets added later on. Once completed, you’ll move onto assembling the exterior and then returning inside the vehicle to add details before finally completing the model with the addition of the windshield and roof.

The finished product is much more sturdy than I’d have thought for a model of its size and is definitely one of the more well-built kits in recent times. Bumps and drops don’t leave a scratch on the DB5, which can’t be said for something like the UCS Slave 1. And for the number of pieces used in the kit at its scale, LEGO has done a top-notch job at recreating the iconic vehicle’s design.

Aside from just sporting some flashy, eye-catching details, the 007 Aston Martin also packs many notable features that bring the build to life. LEGO has forgone a few traditional features like functional steering in favor of some more unique ones, a decision which pays off for making the DB5 one of LEGO’s more memorable kits.

Many of the features you’d expect a car to have are present, like opening doors and trunk door alongside access to the engine through the hood. The real star of the show in terms of functionality for me is the working ejector seat which is not only extremely satisfying, but also technically impressive. By pulling back on the rear bumper and releasing, you’ll send the driver’s seat flying out of the car.

Moving the gear shift will also expose or hide the DB5’s front-mounted machine guns, which easily flip back into the car. You’ll also find rotating license plates as well as optional tire slashers. There are also plenty of hidden gadgets within the car like a location tracking screen and telephone.

A prized ride or a heap of scraps?

For James Bond fans looking to bring the spy’s iconic ride home, it’s difficult to say if LEGO’s most recent release will be accurate enough to adorn your collection. Though as someone who isn’t one of the franchise’s biggest fans, I think LEGO nailed it with their brick-built recreation.

In order to accommodate all of the features, the Aston Martin DB5’s overall shape sits in a weird middle ground; it nails the over form-factor in many aspects, but isn’t perfect. It’s one of the less-blocky LEGO kits and because of that, is a bit uncanny. The build isn’t quite like the real thing, but it’s too accurate to be your typical LEGO release.

The DB5 isn’t perfect though, as it relies very heavily on stickers for adding details to the kit. Just about all of the insignias and decals across the build are thanks to included stickers, with only a few printed elements appearing in the set at all. This isn’t a big concern for many, but it’s always a bit disappointing that these more exclusive sets don’t include printed pieces.

A more worthwhile critique is that not all of the added play features are as well-executed as others. The bullet shield is really the only piece of functionality to fall into this category, as its difficult to activate. It’s a nice touch, but is the weakest aspect of the build in my opinion.

Fit for a spy or your collection | 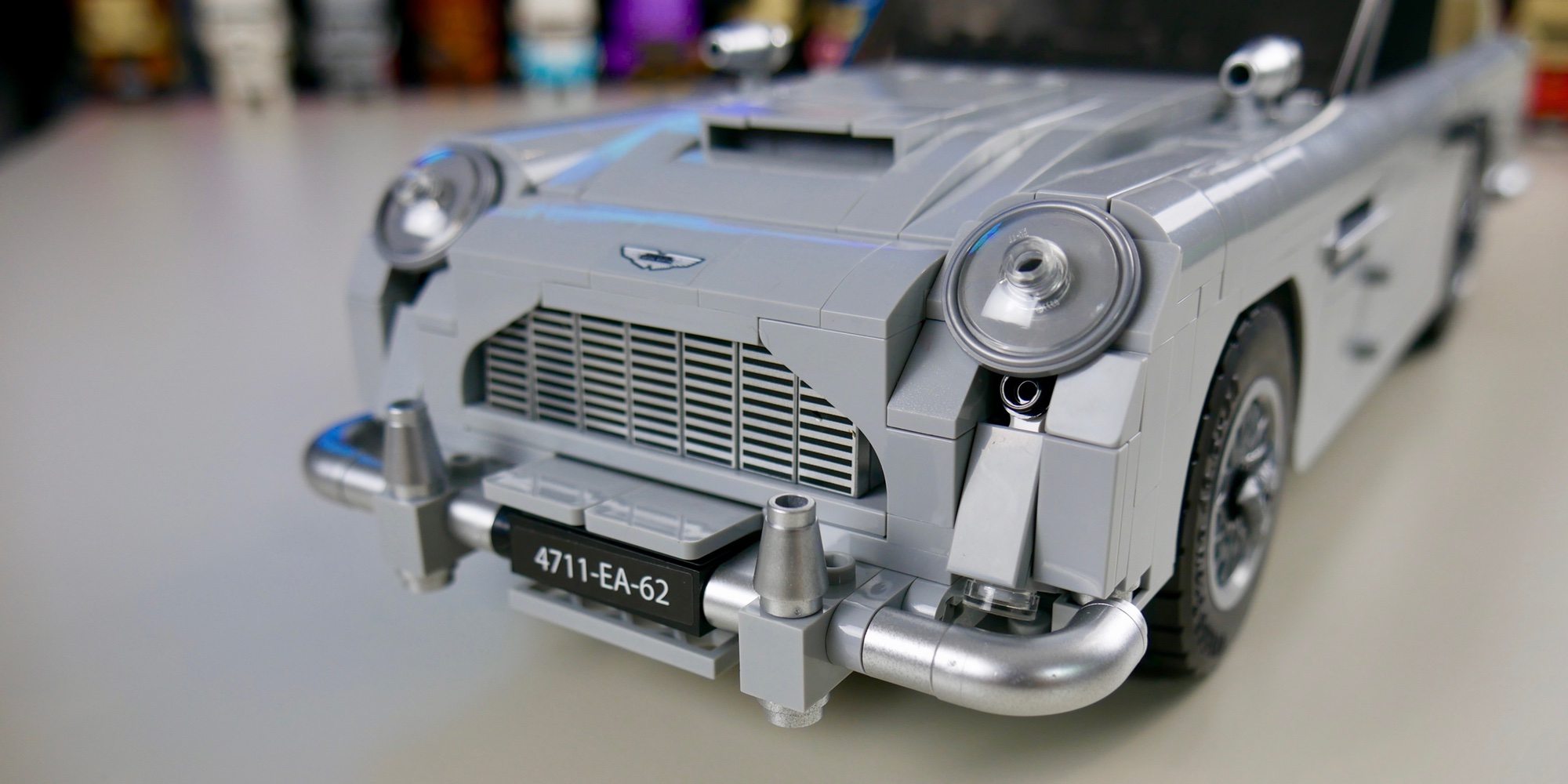 LEGO has been on a roll with fantastic set releases this year. For its latest debut, the Aston Martin DB5 certainly stands out amongst the already-stellar lineup of builds. As far as kits that blend design and functionality, LEGO hasn’t released anything this impressive in a long time. I do love the UCS Star Wars kits, but they’re models that will live out their days on a shelf. The same can’t be said for the DB5, as its play features beg to be shown off, making it a

I’m not the biggest fan of LEGO cars, and in fact, the DB5 is my first brick-built vehicle recreation. And as far as first impressions go, LEGO’s partnership with Aston Martin has paid off big time. Whether you’re a fan of James Bond looking to bring home a piece of Goldfinger or a LEGO fan in need of a technically impressive kit, the new 007 Aston Martin DB5 is worthy of a spot in just about anyone’s collection.

Making a widespread release come August 1st, the kit retails for $149.99 and can be purchased directly from LEGO. Members of LEGO’s VIP program can currently pick up the set a little early, which I’d suggest doing before it potentially sells out upon next week’s launch.