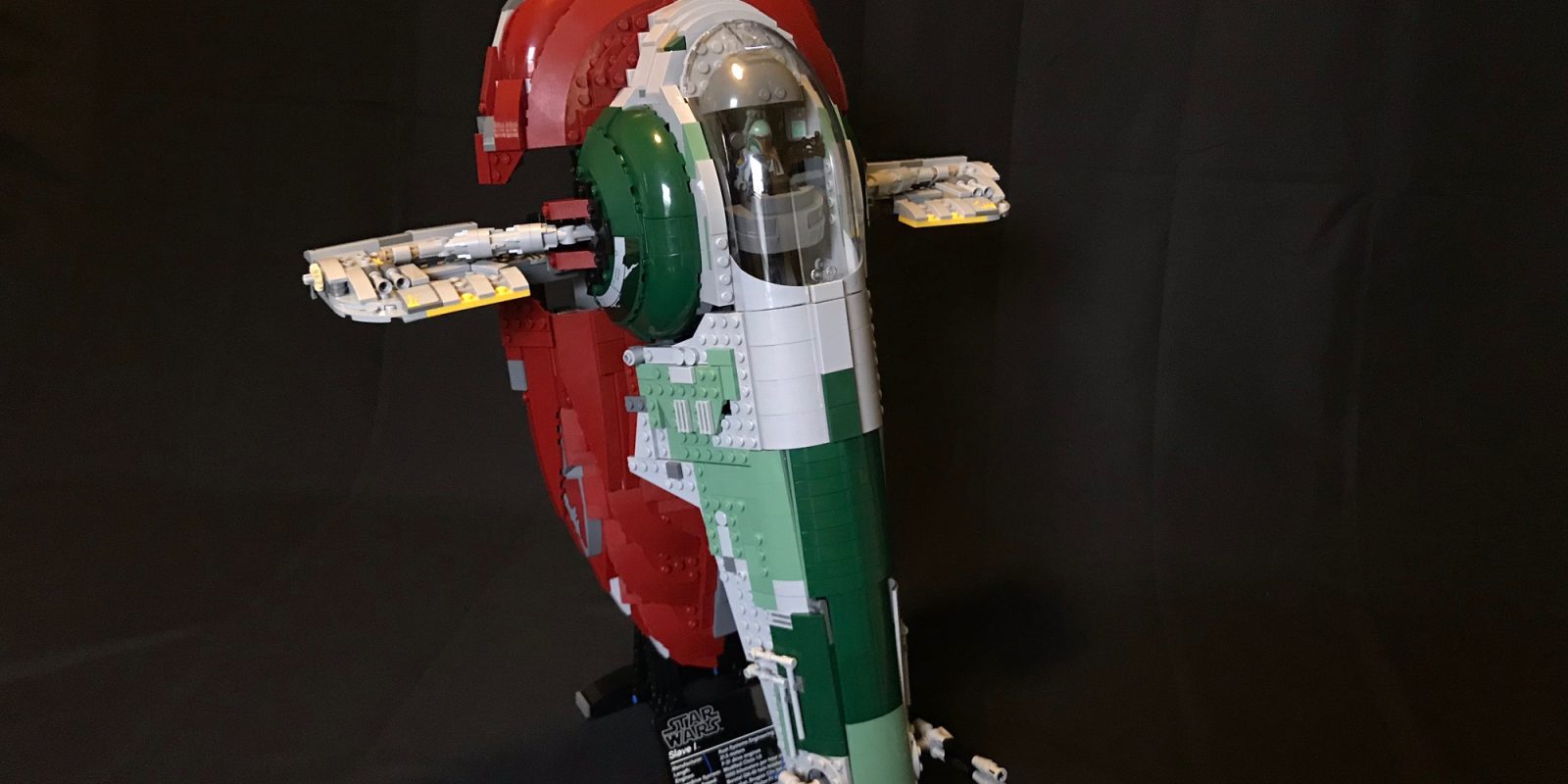 Continuing our coverage of LEGO’s line of Collector Series sets, today we’ll be building the UCS Slave 1. Despite his brief appearances in the original Star Wars films, Boba Fett is still a fan favorite amongst the cast of other characters. Which means fans of the armor-clad bounty hunter will be pleased to hear that LEGO gave his ship the attention it deserves. Head below to see how the bricks stack up….

As with other UCS sets we’ve taken a look at, these kits are typically massive and highly detailed, but the Slave 1 hits these marks at an even more extreme degree than the norm. Clocking in at an insane 1,996 pieces, the ship runs almost 2 feet long with its wingspan surpassing a foot. If you were looking for a more reserved kit in terms of size, the Slave 1 certainly isn’t for you.

Separated into 13 bags, the Slave 1 also includes an instruction booklet packed with biographical and historical data on the ship its based on. Something we’ve come to expect with the Star Wars Ultimate Collector Series sets. Included as well is an informative plaque and display stand to highlight some of the famous vehicle’s stats as well as showcase the highly detailed model. The Slave 1 also includes 4 Minifigures: Boba Fett, Han Solo, a Storm Trooper and a Bespin Guard. 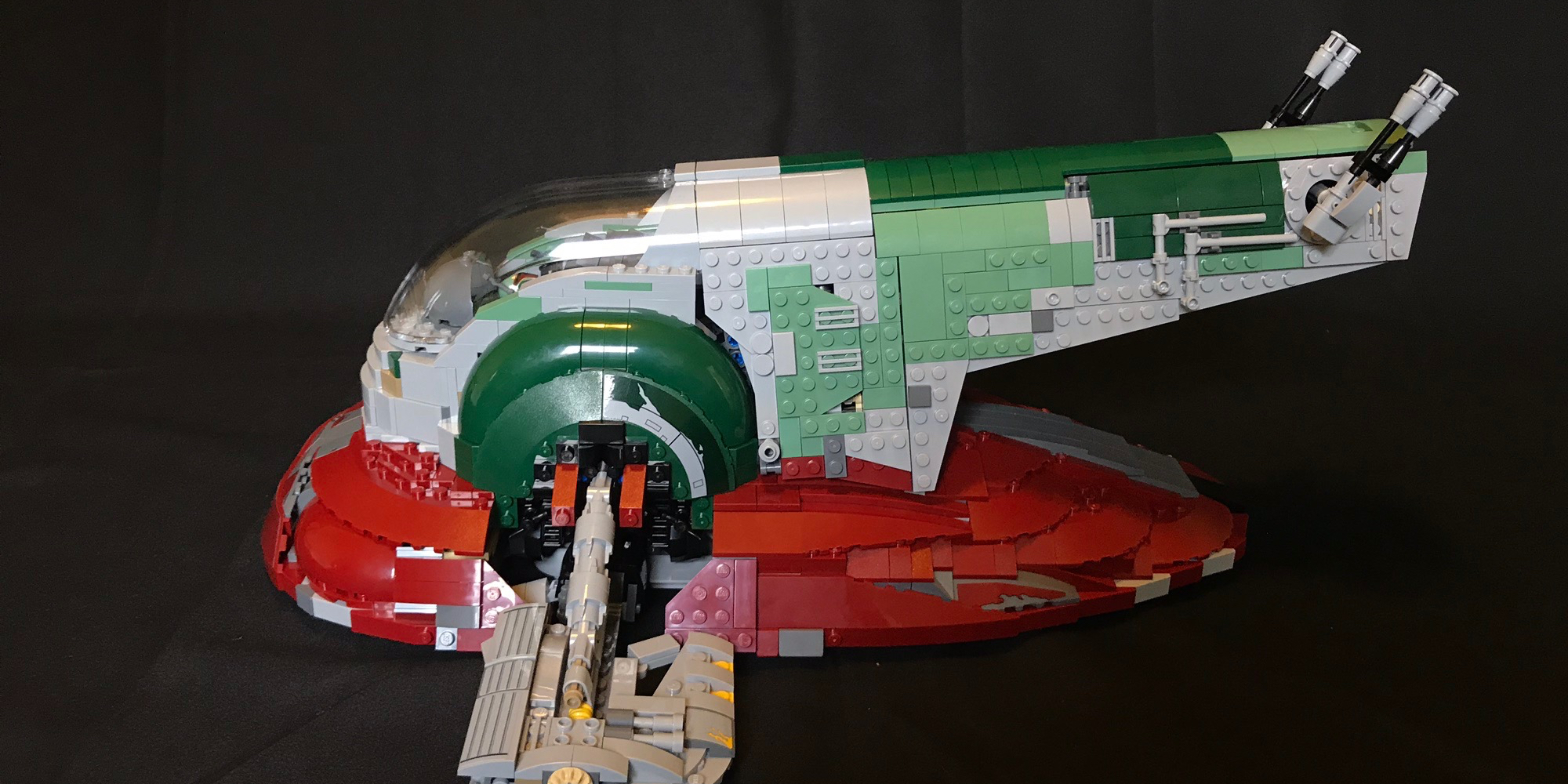 Back when LEGO began its collectors series of sets, they were criticized for being a bland collection of uniform pieces. But in the past 15 years, LEGO has learned a thing or two and really stepped up its game. The Slave 1 couldn’t be a further departure from the UCS sets of the past, sporting a variety of different colored and shaped elements.

Some will be disappointed to hear (just as I am) that the Slave 1 relies fairly heavily on stickers to add additional details. In the past, elements were printed with patterns and designs directly on them, but it looks like LEGO is still not willing to bring this back, even in the higher-end sets. Despite this, the Slave 1 is detailed enough on its own, so it would still look great even if you decided to spare it the sticker treatment.

Like I said before, the the UCS Slave 1 is just as monstrous in size as it is detailed, well as far as LEGO kits go. What makes it really impressive is that the designers were able to achieve this size all while still nailing the overall shape of the vehicle. And something like the Slave 1, which is comprised of curves and odd angles doesn’t always translate over very well to LEGO. But that certainly wasn’t the case this time, as the kit manages to stay true to the original design.

Despite pulling off the swanky curves as well as being covered in detailing pieces, The Slave 1 is surprising sturdy. It isn’t perfect, as there are some small elements on the back which may fall off when not carefully placing the model on its display stand, but that’s about it.

Play features aren’t this set’s strong suit, but it completely makes up for that with the details it packs. While the Snowspeeder had a variety of interactive functionality like movable engine panels, rotating turrets and posable exhaust flaps, the Slave 1 trades these for what I’d call ‘posable display features’.

While things like a removal cockpit, rotating blaster weapons and posable fins are incorporated into the Slave 1, those aren’t what really catch my eye. It’s the smaller details like missile hatches and a hidden cargo area to store a Carbon Frozen Han Solo that make this model as intricate and detailed as it is. LEGO managed to hit a great balance between both types of features, a trend which I hope continues with future sets. 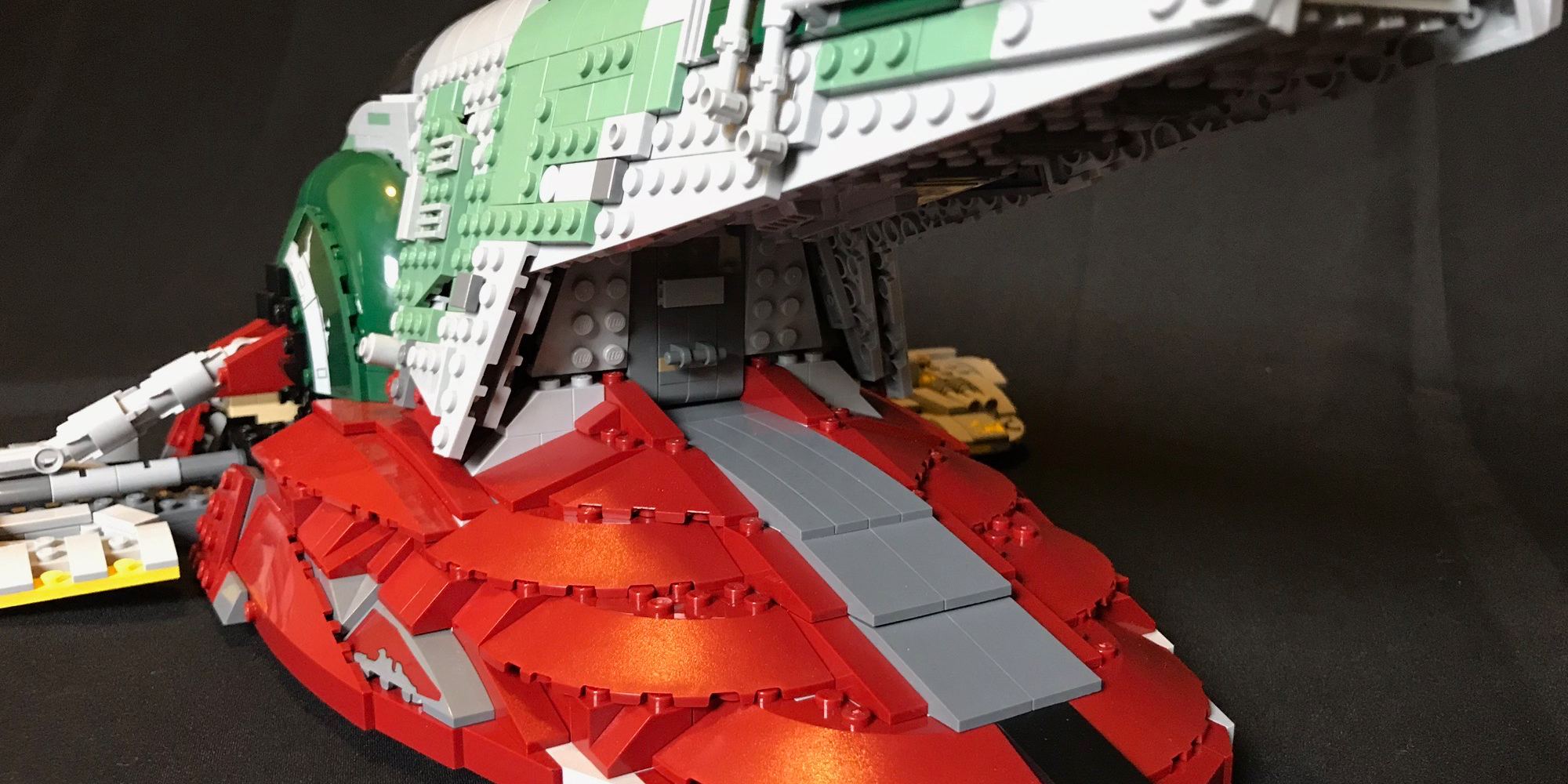 The fact that these inclusions aren’t necessarily meant to be frequently played with doesn’t mean they aren’t wonderful additions to the set. Just as with the rest of the detail packed into the build, these elements clearly show that LEGO was trying to make a really fantastic Slave 1 kit, one that included all the bells and whistles you’d expect to find.

All this adds up to making the UCS Slave 1 an extremely impressive display model, which is exactly what I was looking for in a set. Don’t get me wrong, there is definitely something satisfying about tweaking the positioning and posing of a model. But at the end of the day, its going to be admired on my shelf, so emphasizing detail over features is a big positive for me.

Now I’m not completely in love with the model, but pretty much all of my complaints fall onto the display stand. It isn’t the worst, but compared to the UCS Snowspeeder’s stand, this one really falls flat. I guess the choice emphasizes the notion that the Slave 1 is meant to be on display, so LEGO doesn’t really expect you to be picking it up a lot. That being said, it would have still been nice to have includes a much sturdier version of the stand.

At a price tag of $200, you may be asking yourself if the UCS Slave 1 is worth adding to your collection?. If you’re looking for a model packed with detail to set on a display to admire later, then I would wholeheartedly recommend it. The details and attention to detail definitely overshadow any gripes I had with the stand or sticker usage.

The LEGO UCS Slave 1 set is available at Amazon for $199.97 shipped. If you’re a fan of Star Wars, Boba Fett or just extensive LEGO models, you’ll definitely enjoy the building process and the final display piece.