Review: LEGO’s life-size Porg is one of the cutest kits yet & a must-have for Star Wars fans 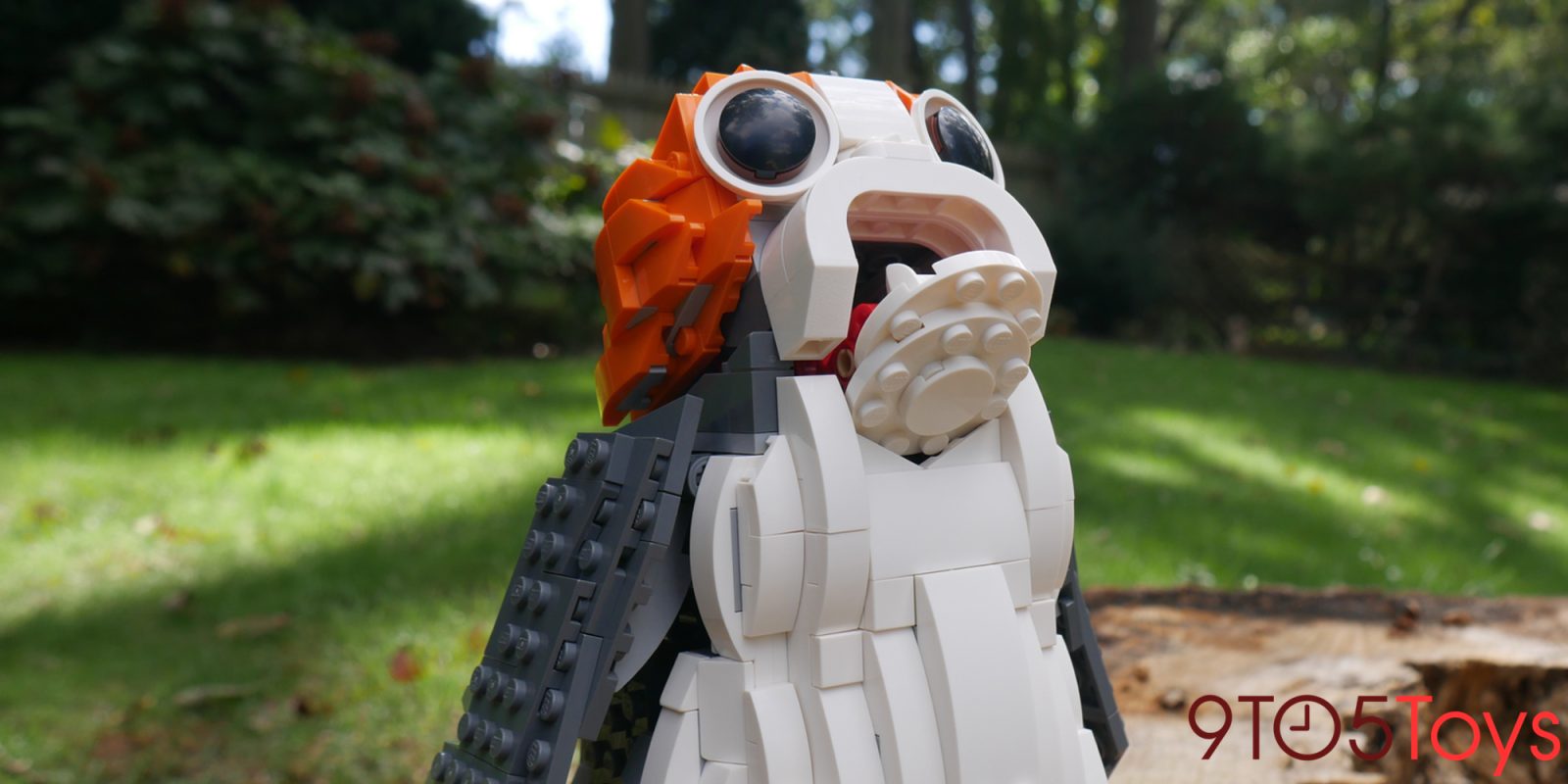 This year has been filled with some pretty eye-catching LEGO kits. Ideas assembled a mighty Voltron and we were able to ride in style with a souped-up Aston Martin. But now that the fall lineup of LEGO releases is here, we’re getting a look at some more must-haves. While the new Cloud City set has taken the spotlight, another new release debuted just last week. Stacking up to over 800 pieces, the new Star Wars LEGO Porg 75230 may just be the cutest kit yet. Head below for our full hands-on review.

Porgs are one of the more iconic creatures from a galaxy far, far away even though they made their way into the Star Wars universe just last year. Debuting in the release of The Last Jedi, the lovable birds inhabit the remote planet of Ahch-To and give Luke a little company during his years in solitude. Some aren’t the biggest fans of the birds. But there’s no denying that they’ve made their mark on movie goers and nested their way into the long list of instantly recognizable aliens from the franchise.

Porgs were quick to enter the LEGO realm, first showing up in the UCS Millennium Falcon. It wasn’t until later with the release of Ahch-To Island Training that there was a more affordable way to obtain them. The recent release marks their third brick-built appearance, although LEGO Porgs have gotten a serious upgrade this time around.

At 811 pieces, the new Porg 75230 set stacks up to a life-sized replica of the feathery creature from Episode VIII. 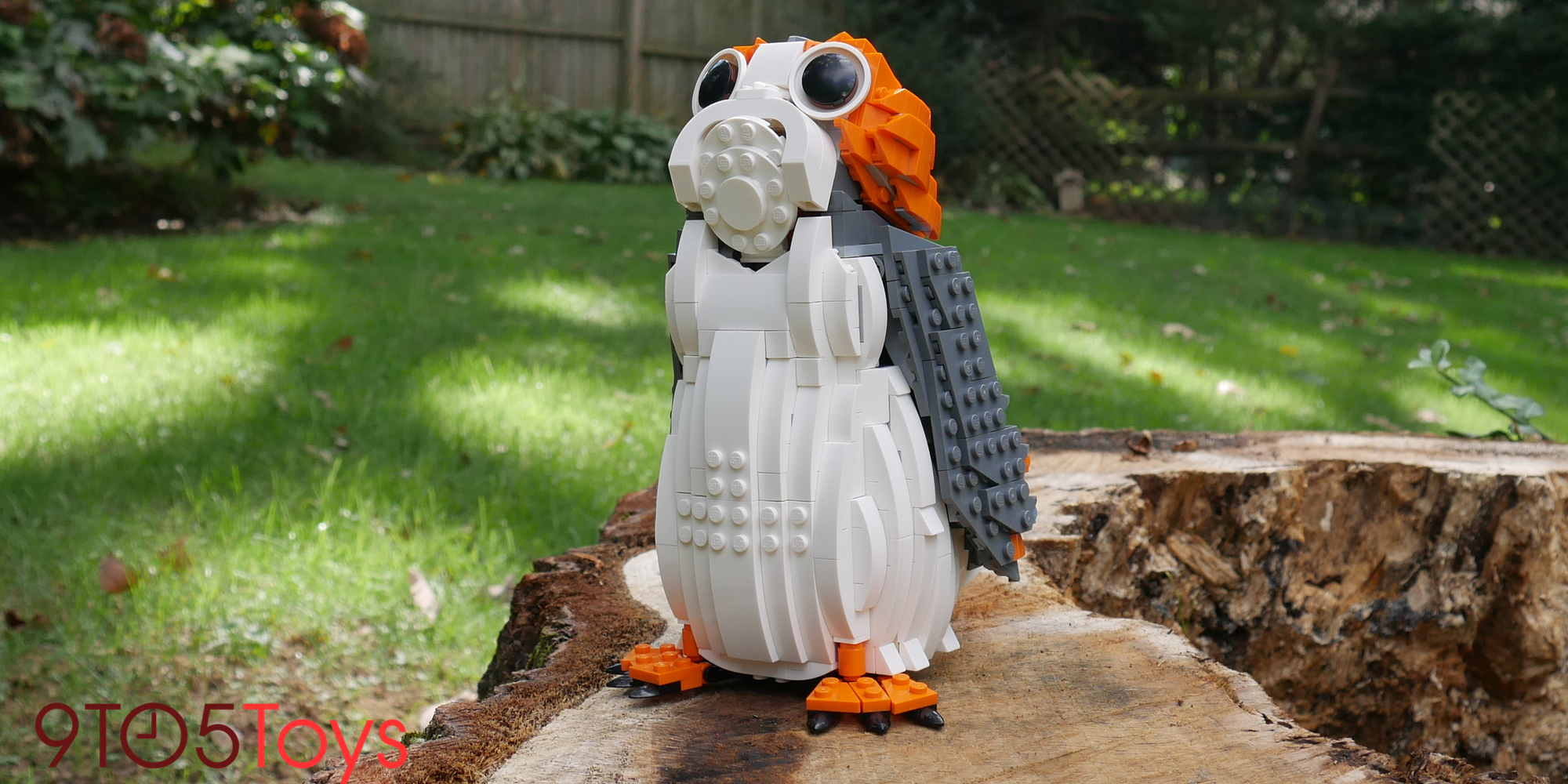 The Porg’s construction is based around a hollow Technic frame that houses some mechanics. It’s by no means uncommon for sets to be structured around an internal armature, but things are a bit different this time around. All of the external bricks fit on like a shell thanks to some Technic pins. Handfuls of past sets have used a similar technique, but none have the frame and aesthetic elements so divided.

As far as the outside is concerned, the Port is mainly comprised of dark grey and white bricks with occasional sprinklings of orange. Its bright head and wide eyes make it instantly recognizable as the beloved Porg. But all of the other brick-work doesn’t go unnoticed. There are a lot of unique techniques leveraged to achieve the birds plumage and overall form.

A clever stacking of slopes achieves the bird’s rotund belly. Not to forget the set’s intricate laying of tiles to assemble the wings. And all-in-all, it’s pretty true to its silver screen counterpart. A difficult feat for LEGO renditions to accomplish. 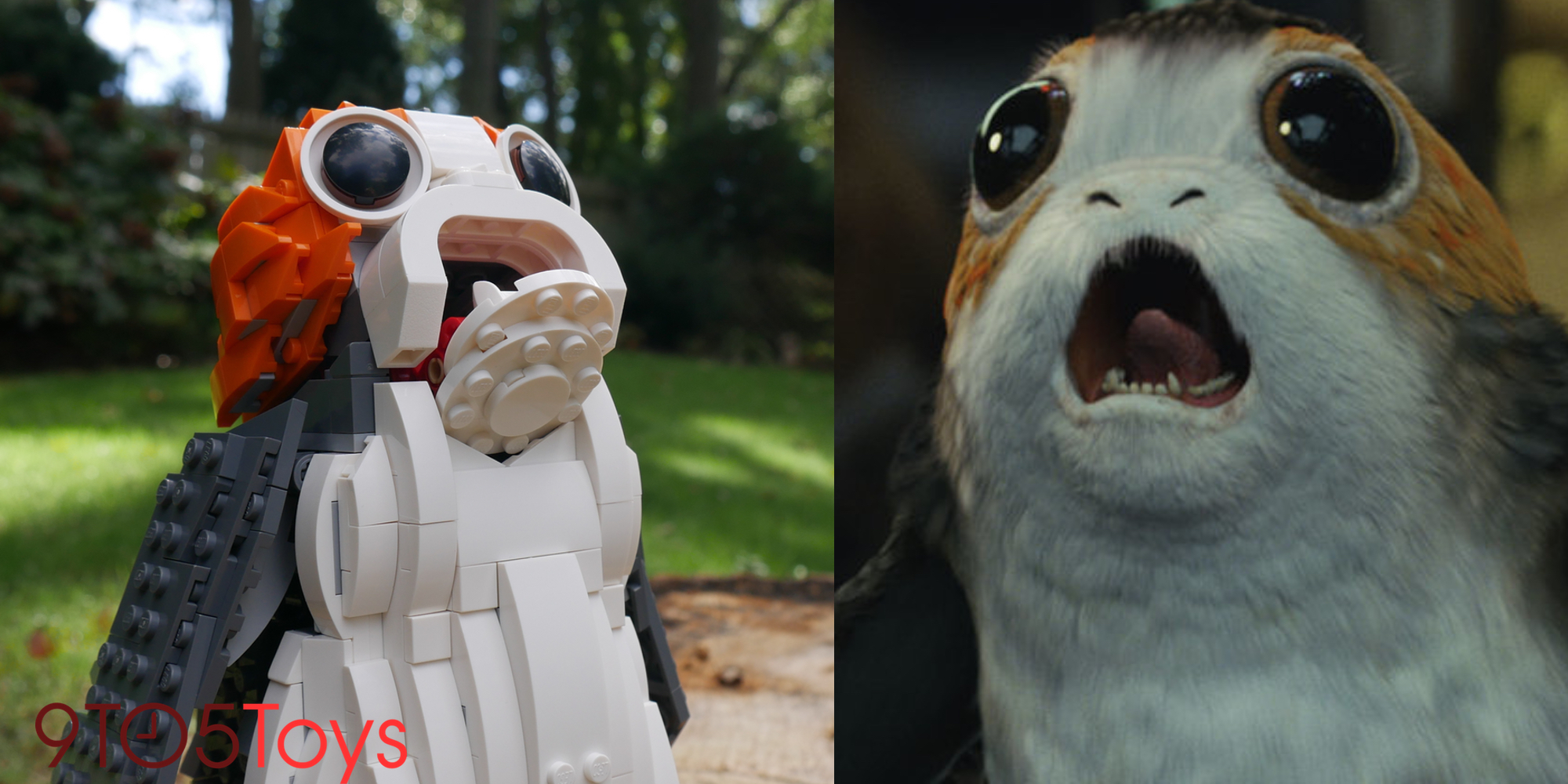 Once completed, your brick-built Porg stands around seven-inches tall. It’s hard to tell from the film just how big Porgs really are, but by just about all accounts, the brick-built version is a life-size rendition. LEGO has managed to pack in one main play feature, which allows the Porg’s wings to flap and its mouth to open. Normally I don’t care for these inclusions, but it’s a small touch that makes this kit just a little bit better.

The Porg 75230 set is around the same size as 2017’s BB-8, which I think works quite nicely for display purposes. It is a pretty sturdy model, proving that screen-accuracy doesn’t have to come at the trade-off of being easily breakable. Although the Porg’s feet are a bit too easy to accidentally knock off, my one small gripe. 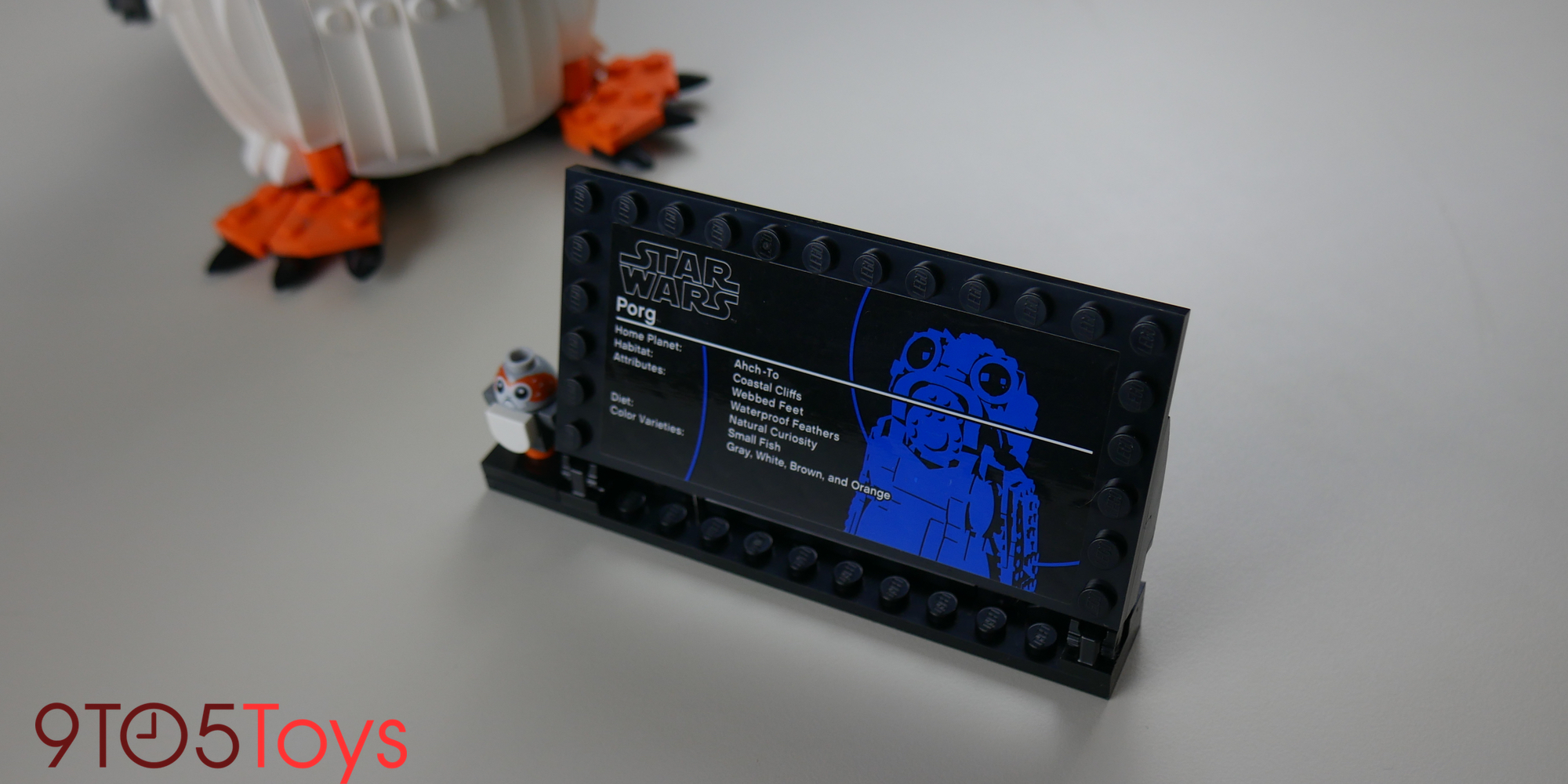 Alongside the Porg itself you’ll also assemble a display stand complete with information card. That’s a pretty standard inclusion among similar builds like the BB-8 and those in the UCS Star Wars line. While this is not an Ultimate Collector’s Series release, it does share many of the characteristics that the line is known for. It has authentic details and looks great on display to name two. You’ll also receive a minifigure-scale Porg which sits happily onto the display stand.

A worthy addition to your collection? 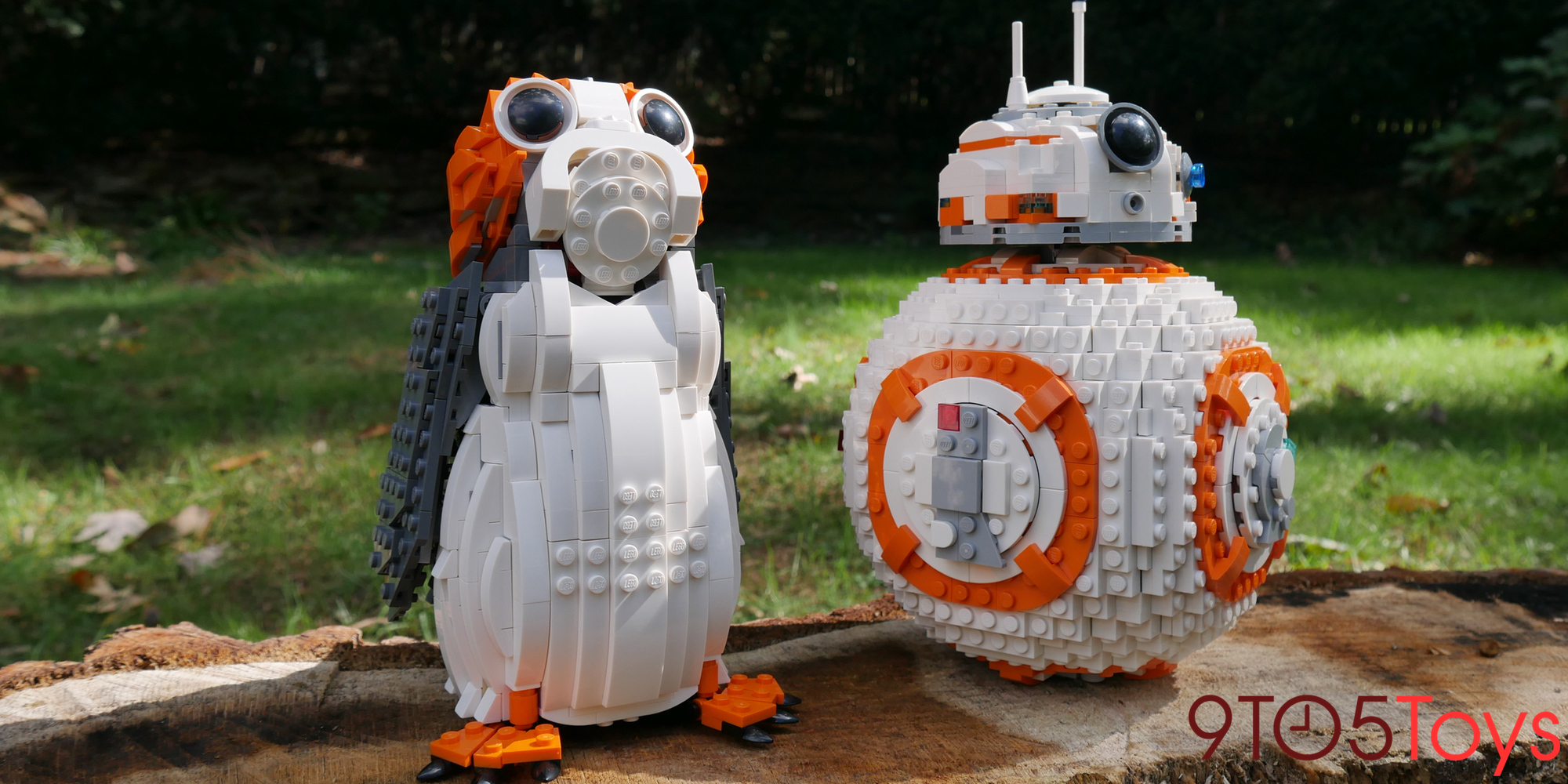 The new LEGO Porg enters with a modest $69 price tag. So with over 800 pieces, it’s quite the bargain compared to other Star Wars sets. The finished model is about as accurate as can be at this scale. And the fact that it is life-sized makes this a one-of-a kind kit.

We haven’t seen LEGO attempt to release a 1:1 scale Star Wars kit in nearly two decades. At least not since 2001’s UCS Darth Maul bust. LEGO Porg makes an excellent addition to the aforementioned BB-8 and shows that LEGO can debut some top-notch releases without them having to carry a $100+ price. 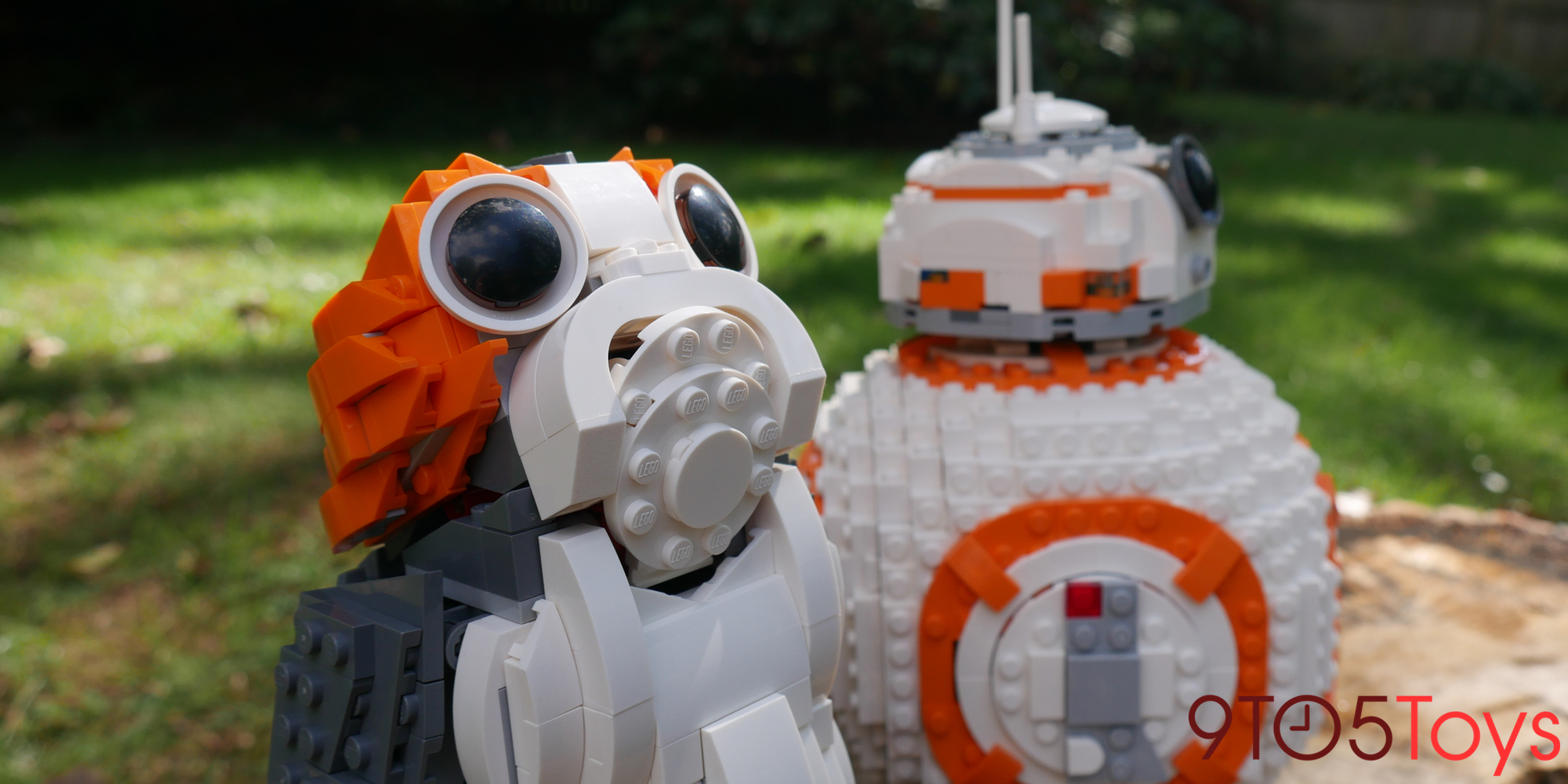 Ultimately, whether you should pick up this set comes down to one simple thing. Whether or not you like Porgs. It’s such a well-crafted kit and about as true to its inspiration as you could ask for. Not only that, but it ditches the usual Star Wars price premium we normally see. So at $69, the Porg 75230 set is an easy purchase compared to more daring sets like the Sandcrawler or Kessel Run Millennium Falcon.

It’s one of the more delightful kits in the lineup of Star Wars builds and for me it was a must-have. And if you like the feathery creatures, it should be one for you as well.