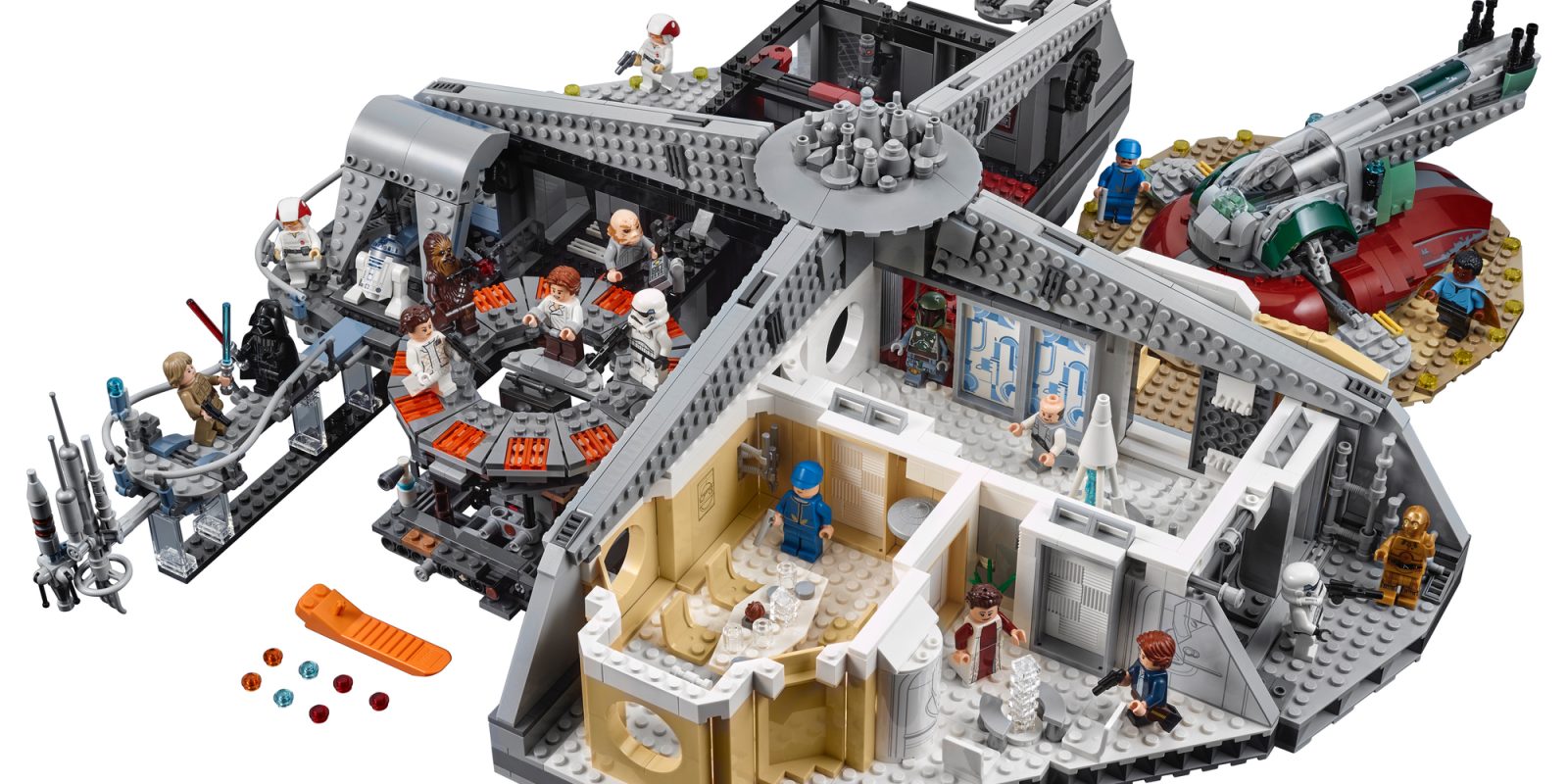 Since last year’s UCS Millennium Falcon, LEGO’s biggest set releases have shifted over to other series like Harry Potter, Technic and more. Now for its newest massive kit release, LEGO is returning to a galaxy far, far away to debut its 2,800-piece set, Betrayal at Cloud City. Recreating iconic moments from The Empire Strikes Back, this set includes tons of details, 18 minifigures and more. Head below for more details.

LEGO’s latest Star Wars set stacks up to an almost two by two-foot diorama-style layout similar to the previously released Death Star and brings fans back to Bespin for the first time since 2003. Now 15 years later, we’re getting an updated rendition of Cloud City including an extra 2,100 pieces, 18 minifigures and more.

The new Betrayal at Cloud City’s 2,800 part count is sure to make it this year’s largest Star Wars kit, dethroning the Kessel Run Millennium Falcon by over twice the bricks. The highly detailed set is comprised of four different sections, each of which showcase a difference scene from The Empire Strikes Back. 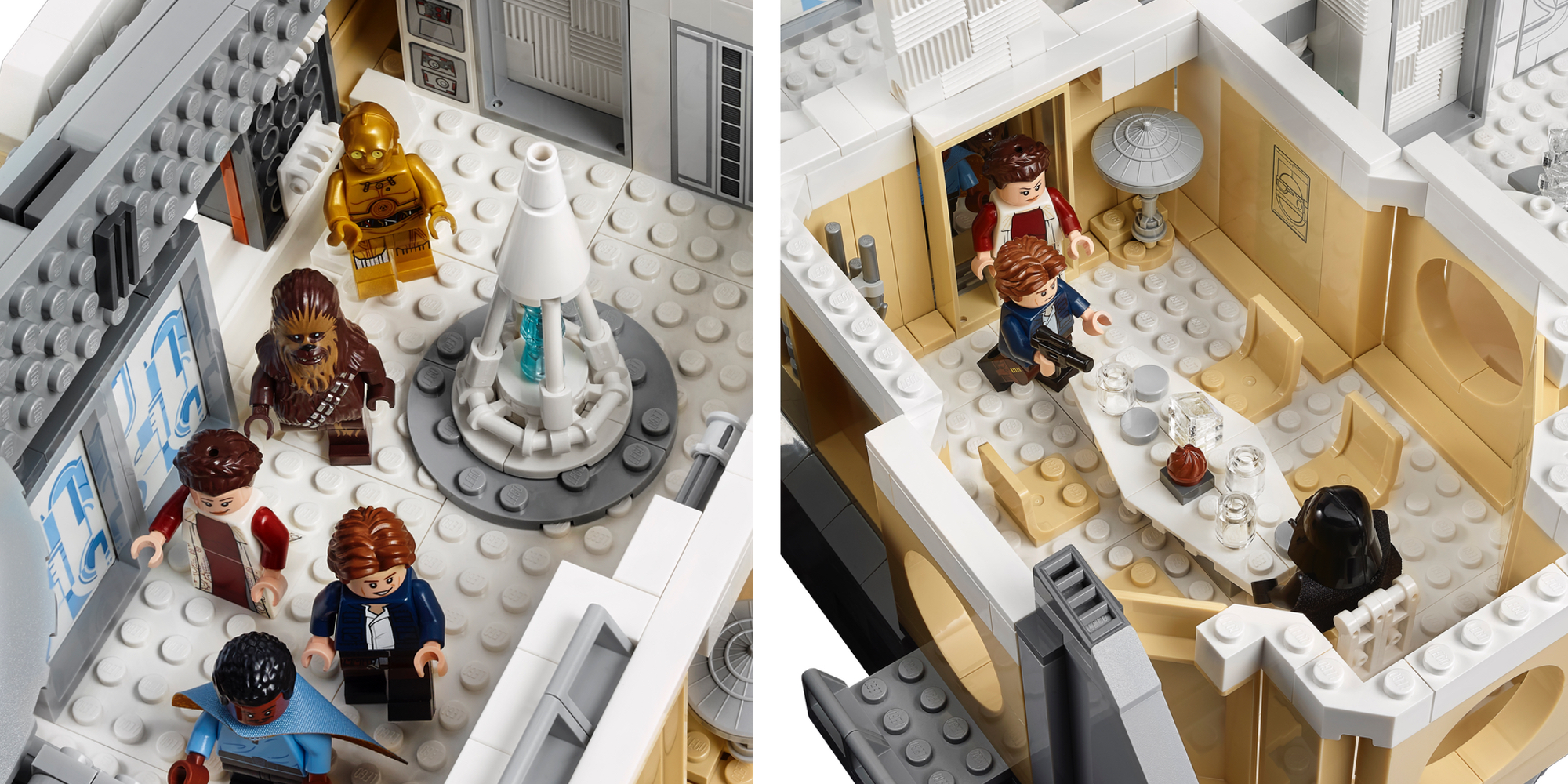 The first section features a circular landing platform complete with a scaled down version of Boba Fett’s Slave I starfighter. Despite its smaller size, the ship still manages to include movable wings and space to stow Han in carbonite for travel.

Journeying from the landing pad will take you inside Cloud City to a series of rooms decked out with an entirely white interior. Most notably there is the dining room where Han and Leia first come face to face with Darth Vader, a side room where C-3PO gets blasted apart and a few other areas from the film. 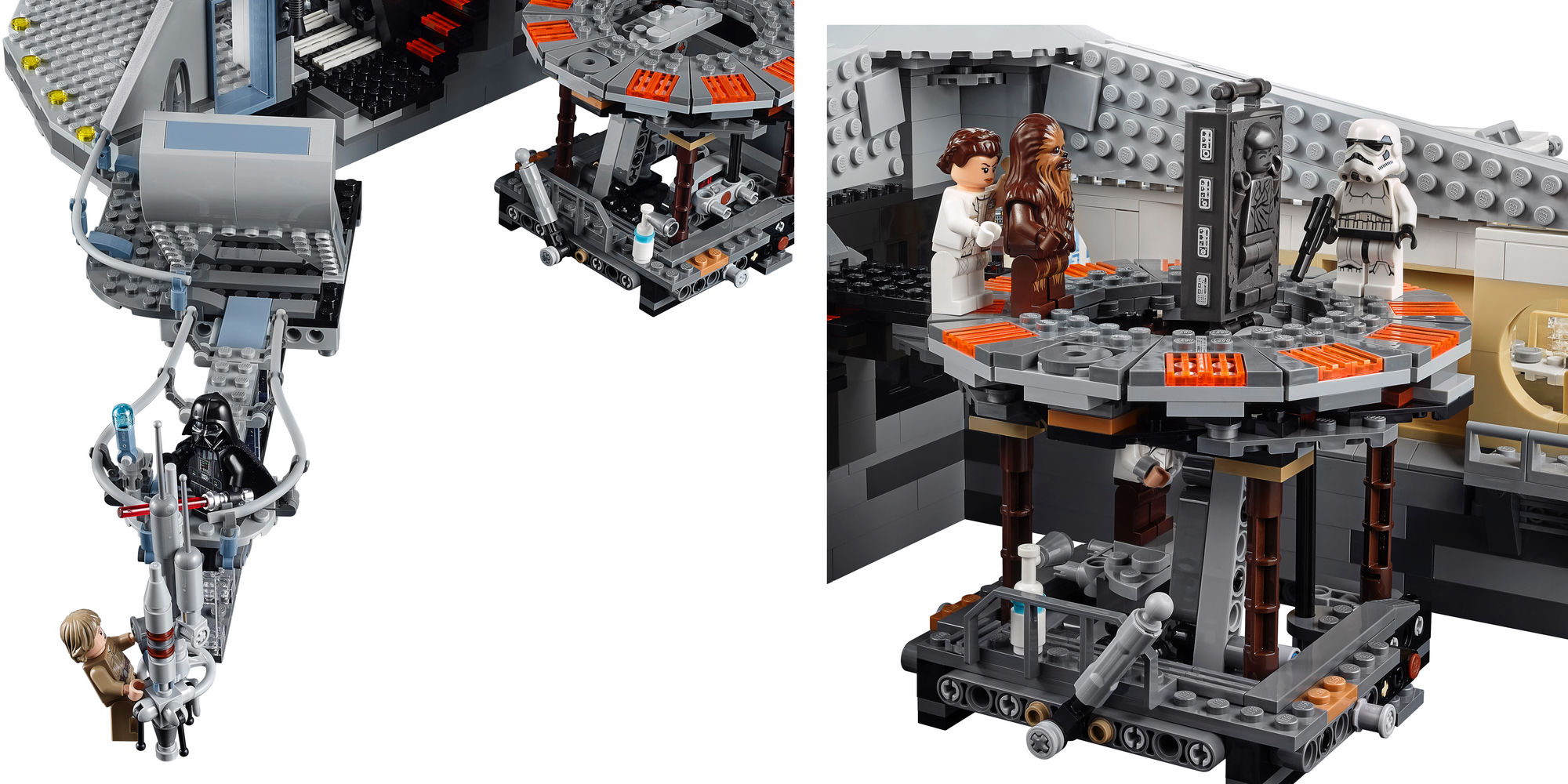 Of course the most well-known aspects of the film fall to Luke and Vader’s epic dual as well as the moments leading up to Han being frozen in the carbon freezing chamber. The third section of the build depicts both of these scenes in fantastic fashion. Both are packed with details that make them instantly recognizable and are the standout aspects of the kit in my book. 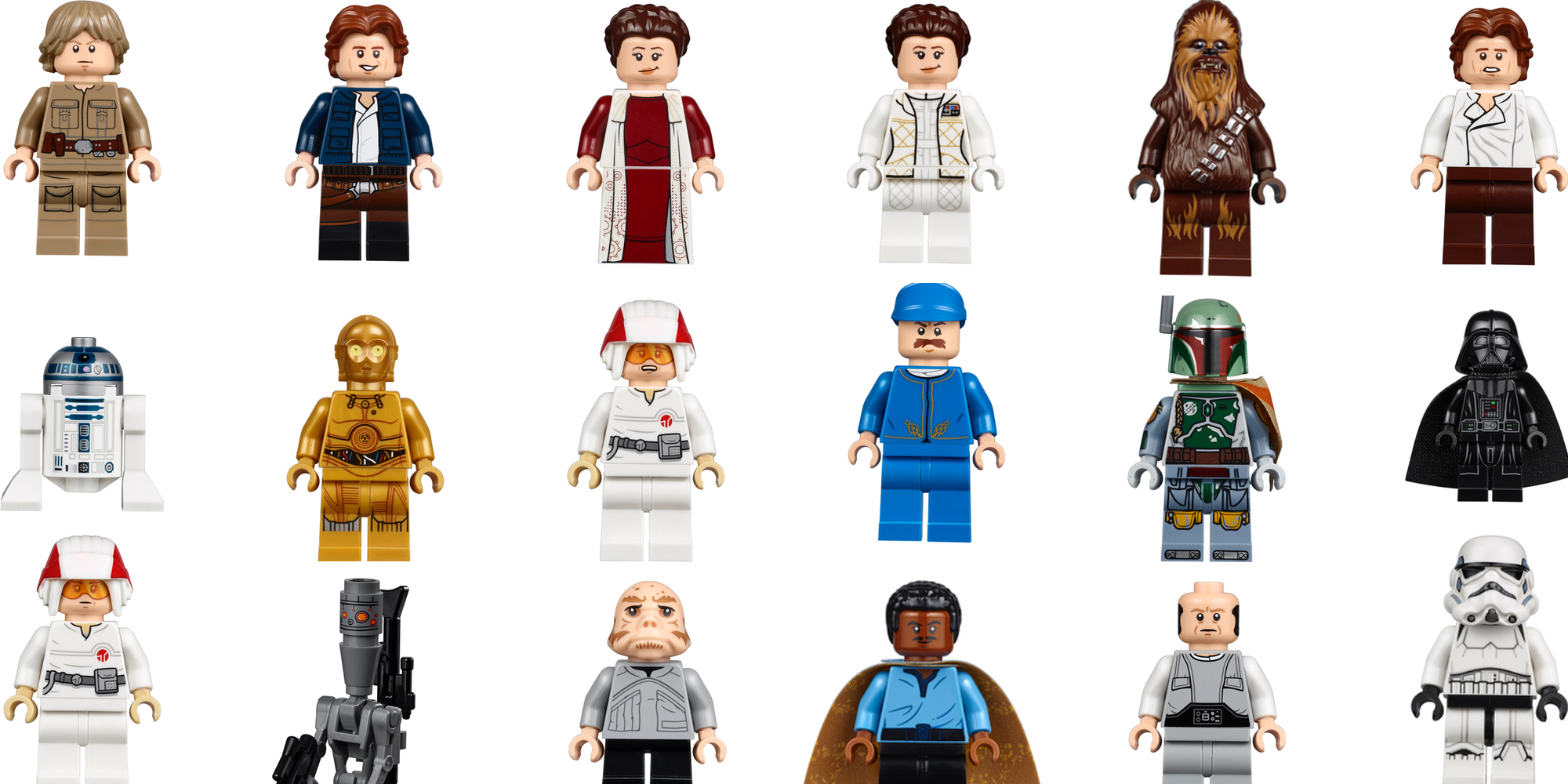 To go alongside all of the iconic areas from the film, the Betrayal at Cloud City set also includes 18 minifigures, many of which are all-new designs exclusive to the new release. There’s the main cast of heroes Luke, Leia, Han and Chewbacca alongside Lando, a series of Cloud City personnel and even Darth Vader, Boba Fett and more.

Given that LEGO teased new Empire Strikes Back BrickHeadz back in June, we should have seen today’s announcement coming, especially since a collectors-style Cloud City set has been rumored for some time now. 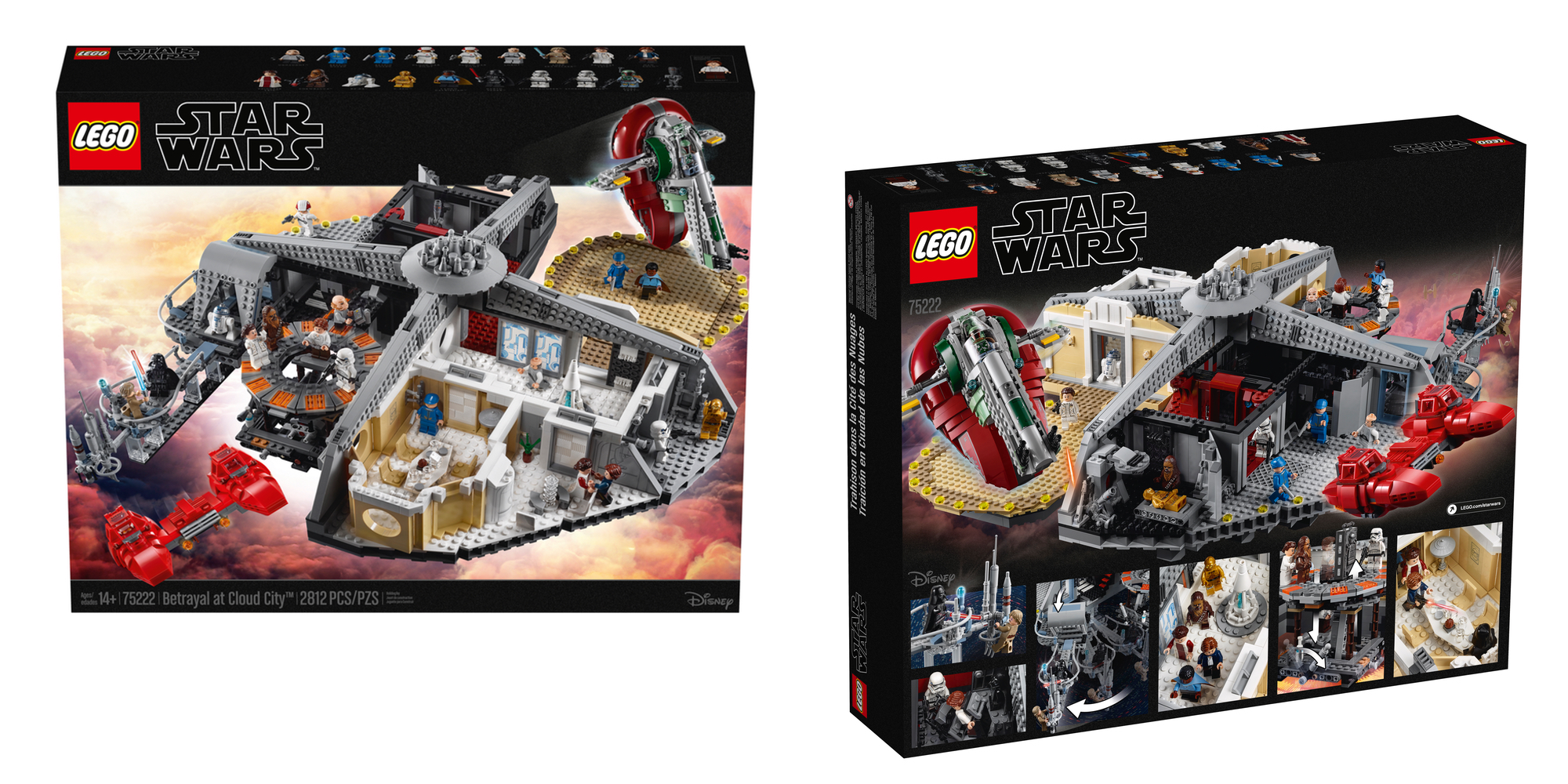 The newest set in LEGO’s Star Wars lineup enters with a $350 price tag and will be available starting on October 1st. While the Hogwarts Castle was one of the most affordable sets at $400 for 6,020 pieces, this is one of the least economic releases in a long time with its eight pieces per dollar metric. But with a 18 new minifigures and some pretty detailed recreations of many fan-favorite locations, LEGO seems to be hoping Betrayal at Cloud City will be a hit based on its iconic nature rather than being a bargain.

Relive a world of unforgettable moments from Star Wars: The Empire Strikes Back or add your own fun twists to the story with this LEGO® Star Wars 75222 Betrayal at Cloud City set. The amazingly detailedset is divided into 4 sections, each depicting scenes from the classic movie. There’s a landing platform complete with Boba Fett’s Slave I ship, a detailed promenade, a dining room with seating for 5 minifigures, a garbage processing room with incinerator, and a sensor balcony for epic Luke vs. VaderLightsaber duels. There’s also a carbon freeze chamber with a function to ‘freeze’ Han in carbonite, aninterrogation chamber and prison cell, a secondary landing platform for the Twin-Pod Cloud Car, and so much more. Add an astonishing 18 LEGO minifigures plus 2 droids to the mix, and you have a set thatStar Wars and LEGO fans of any age would be proud to add to their collection.

• Section 1 features a landing platform with a sliding entrance door and Boba Fett’s Slave I ship with anopening minifigure cockpit, movable wings and space underneath to store the Han in carbonite element.

• Section 2 features a dining room with a table, seats for 5 minifigures and a decorative Cloud City microbuild; lounge with a transparent sculpture and 2 chairs; garbage processing room with an incinerator, conveyor belt and a deactivated IG-class droid; and a promenade with tree sculpture, mural relief and opening doorways leading to other parts of the model.

• Section 3 features a sensor balcony with railing and swing-out function, plus a maintenance cabin with opening round window for epic Lightsaber duels, plus a carbon freeze chamber with lever-activated‘freeze’ function.

• Section 4 features a dark-red corridor leading to the interrogation chamber with a turning interrogation chair, plus a prison cell, hangar with a secret trapdoor and tool & weapon rack, and space for the Twin-Pod Cloud Car with opening minifigure cockpits and 2 stud shooters.