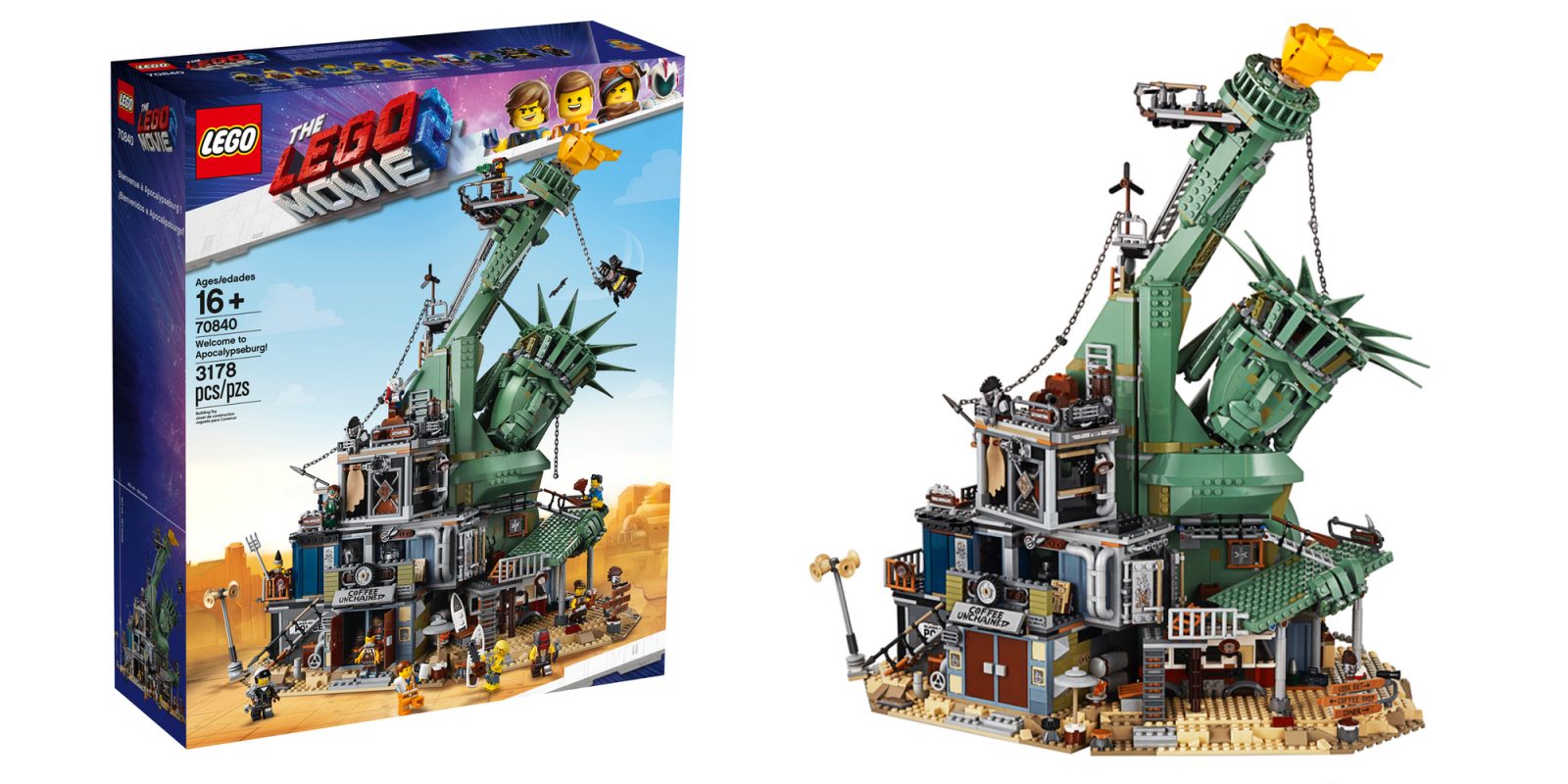 Earlier this week, we got a look at 20 new collectible Minifigures that will be debuting alongside the theatrical release of The LEGO Movie 2. Now to close out the week, LEGO is unveiling what is sure to be one of, if not the largest kit of 2019. Stacking up to 3,178 pieces, the upcoming Welcome to Apocalypseburg! set is packed with 12 Minifigures, plenty of details and 360 degrees of LEGO greatness. Head below for a closer look.

After the roster of The LEGO Movie 2 sets were announced last year, there was plenty of speculation that at least one, more massive release was on the horizon. That speculation turned out to true, as today we’re getting a look at one more addition to the lineup.

With over 3,100 pieces, the new release falls into the top 15 largest LEGO release of all-time. While it may be overshadowed by recent part-count medal holders like the UCS Millennium Falcon and Hogwarts Castle, there’s so much to write home about with the new Welcome to Apocalypseburg! kit. 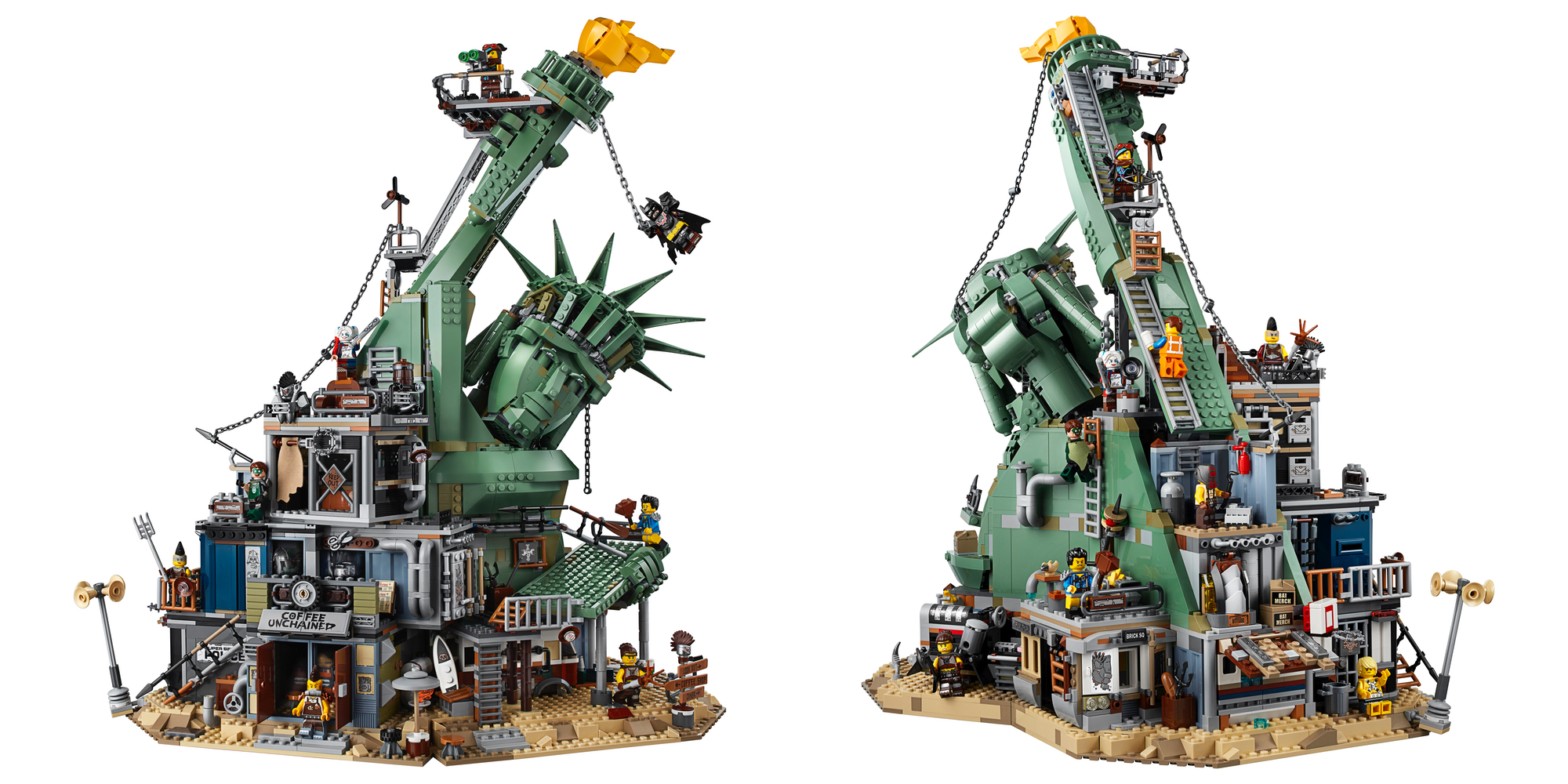 The set recreates the setting from The LEGO Movie’s sequel, Apocalypseburg. As a wonderful reference to the original Planet of the Apes, you’ll find a crumbling Statue of Liberty. In this case though, it’s been adapted into a rag-tag city. Following a similar style to what we’ve seen already with LEGO’s Ninjago City releases, the build features a 360-degree design. Some kits are just a cutaway of a larger structure, but that’s not the case here.

So much has been managed to be squeezed into every inch of the kit. There are tons of removable modules, like a café, Scribble Cop’s office, an armory, barber’s/tattoo parlor, Lucy’s hideout and more. Play value is off the charts, but the set just looks fantastic too. It nails the dystopian future vibe, and almost looks more like a Mad Max LEGO kit than anything else.

And of course, what would a massive set like this be without a whole assortment of Minifigures. All 12 of the included figs are new for 2019, though only some of them are set exclusives.

Emmet, Lucy and Batman have all made appearances in other The LEGO Movie 2 kits so far, though the same isn’t true for the other figures. Some of the notable inclusions are Scribble Cop, the ‘Where are my pants?’ Guy, Green Lantern and plenty of other characters from the first film decked out in apocalypse-style regalia.

Luckily those wanting to bring home the massive set won’t have too long to wait. It’ll be arriving to LEGO’s online store and retail locations on January 16th, giving fans plenty of time to pick it up ahead of The LEGO Movie 2’s release.

It enters with a $299.99 price tag, which is a little bit pricier than I’d have liked to see. Though it’s right on the money for a kit with over 3,100 pieces, so you’re at least not paying a premium like other IPs. Regardless of its tie-in to the film, this is just a phenomenal set all-around.

Build and role-play with this huge THE LEGO® MOVIE 2™ Apocalypseburg model!

Enjoy an epic 360-degree play experience—and prepare for an alien invasion—with THE LEGO® MOVIE 2™ 70840 Welcome to Apocalypseburg! construction toy. An advanced building set, it has over 3,000 pieces and presents an awesome challenge even for master builders. This THE LEGO MOVIE 2 set features a section of the Statue of Liberty with a chill-out room in the head, café, Scribble Cop’s office with a chair-kicking function, armory, barber’s/tattoo parlor, Lucy’s hideout, Fuse’s workshop, rooftop diner, gym, spa, lookout platforms and loads more! This action-packed toy also comes with 12 THE LEGO MOVIE 2 minifigures to role-play and reimagine your favorite scenes from the blockbuster film.