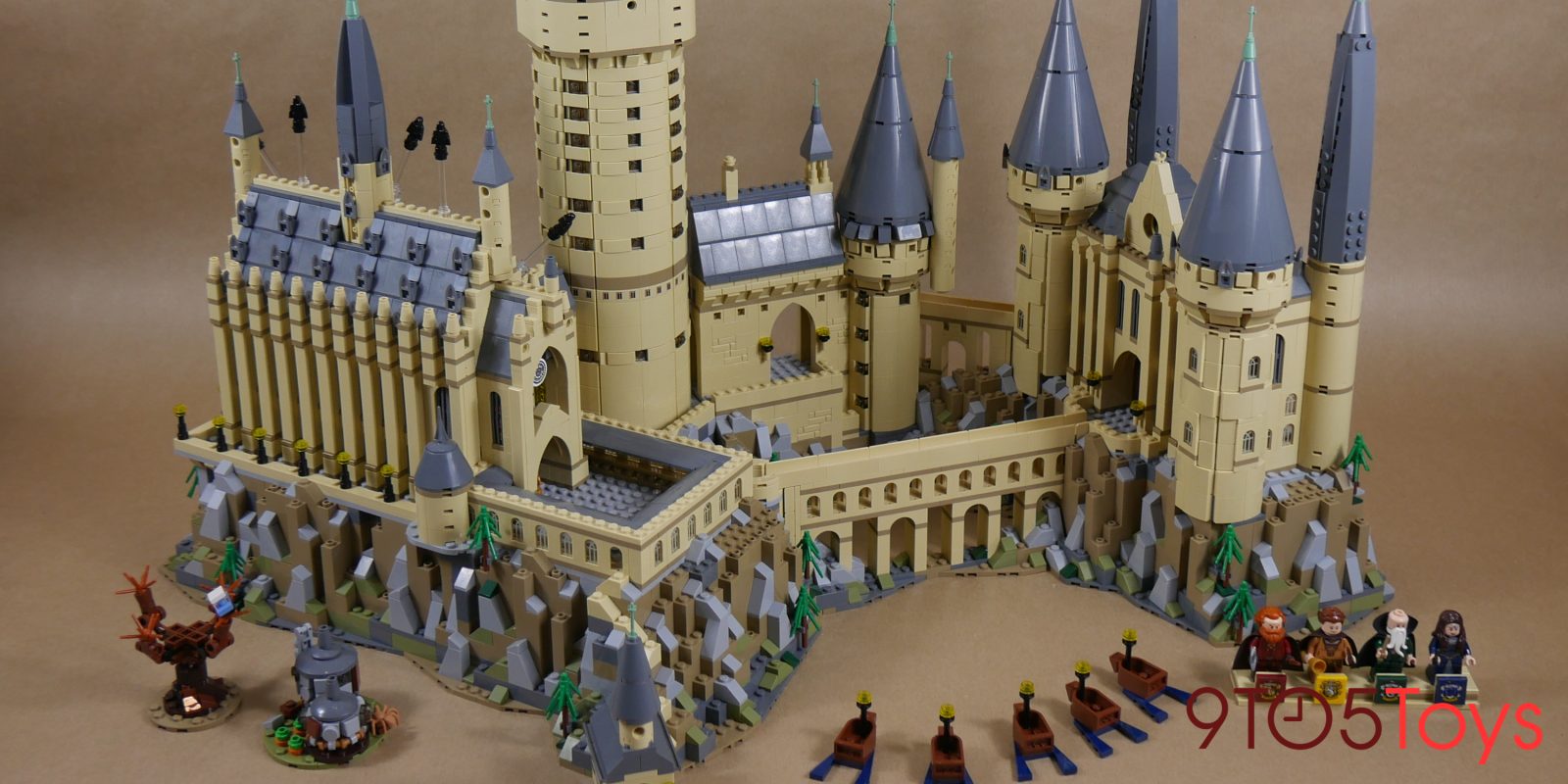 It was just earlier this year that LEGO brought the Harry Potter line of kits back from a nearly decade-long hiatus. And just a few months after the initial announcement, LEGO returned to show off its second biggest set to date, the 71043 Hogwarts Castle.

Now with the 6,000-piece set’s release right around the corner, we’re ready to get down to the nitty gritty and take a hands-on look at this year’s largest LEGO kit. So be sure to head below and see what the Wizarding World of Hogwarts has to offer.

This year’s flagship LEGO releases have fallen into a few different distinct categories. Kits like the 007 Aston Martin maximize features while builds such as Voltron emphasize size and sturdiness. Now we can add intricate details into the mix, with the Hogwarts Castle being covered in some of the most fine brick-work ever released by LEGO.

Compared to the only kit will a larger part count, the UCS Millennium Falcon, the Hogwarts Castle has changed some things this time around. Rather than featuring the usual signs that UCS kits come with like premium packaging and a hefty spiral-bound instruction manual, LEGO has opted for four different instruction booklets, which is a thoughtful and positive change.

The books include the usual insightful tidbits on the building process and real-world inspiration that other sets of this caliber have included in the past. Also included are four sticker sheets. Normally stickers would subtract from the kit’s overall good marks, but in this case, the castle’s graphic designer went above and beyond to bring some very well done illustrations into the mix that wouldn’t be possible otherwise. 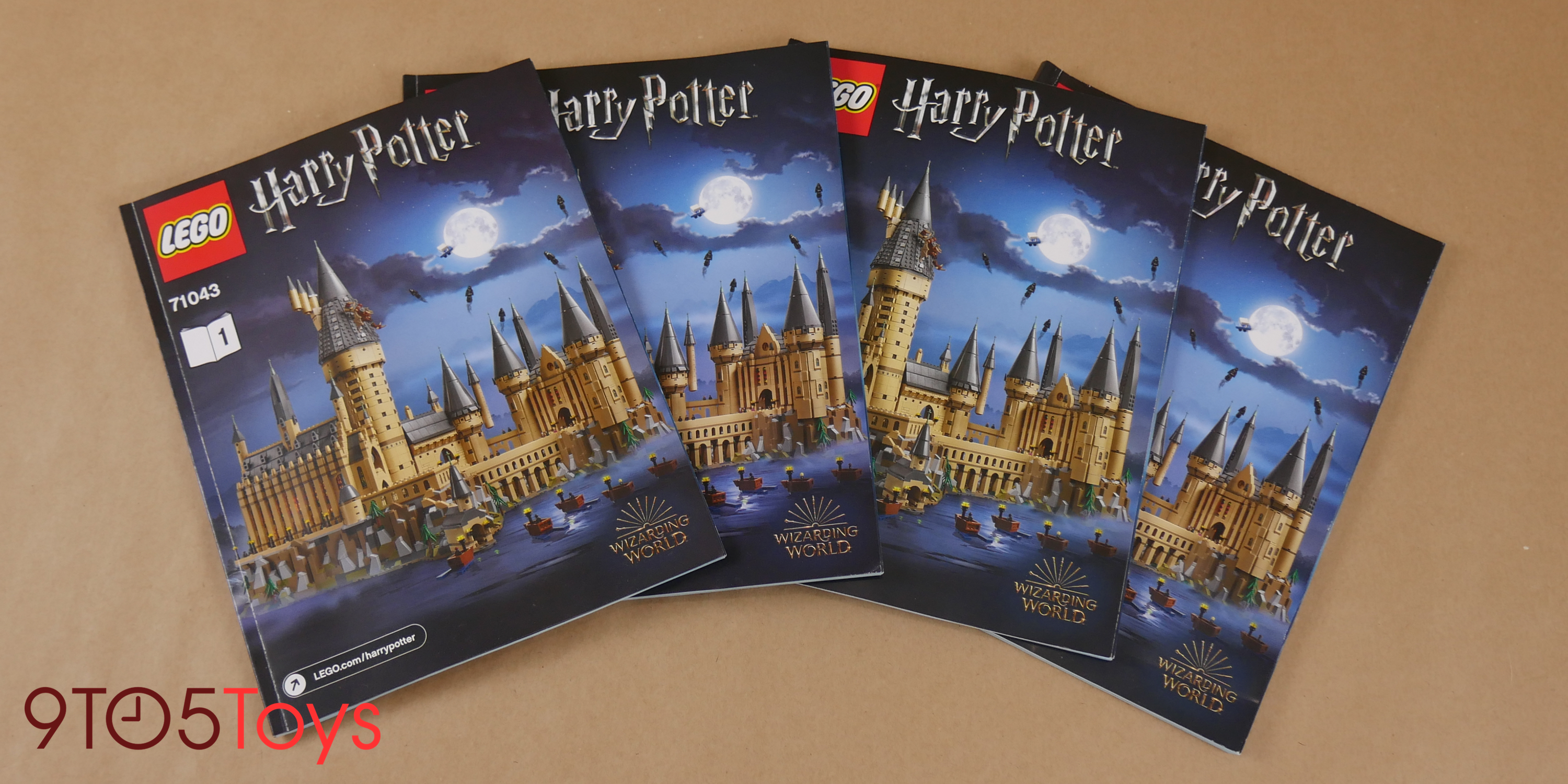 Despite coming in a pretty massive box, it’s difficult to truly grasp how large the Hogwarts Castle ends up being when fully assembled. That is, until you unveil all 37 bags which contain its 6,020 pieces that begin painting a vivid picture on just how grand a build we’re dealing with.

While the UCS Falcon grouped bags into 17 different sections, here you’ll be looking at 37 individual assortments of bricks. This may seem overwhelming, but it actually makes assembly a much smoother process. Rather than having to dig through several bags worth of pieces at a time, you assemble section by section until all of the bags have been exhausted.

The Build: brick by brick |

Hogwarts is built upon a series of Technic beams alongside plates and several larger rock elements. This makes for an extremely sturdy foundation and serves for the general outline that the rest of the kit will be built on top of. Rather than assembling the kit from the ground up, the build is split into two halves. On the left is the Great Hall alongside a mighty tall tower and on the right-hand side you’ll find a series of classrooms and other iconic areas from the films.

Sitting on top of all of the nice rock formations is the actual castle, which unsurprisingly is composed of mostly tan LEGO bricks. Compared to just about every other similar set we’ve gotten our hands-on in the past, that isn’t out of the ordinary by any means. However it is great to see a built that isn’t just several thousand grey bricks, so in that regard, the Hogwarts Castle is fairly refreshing build.

For the most part, there are very few studded surfaces in the finished model. LEGO has done a phenomenal job covering the castle in a series of slopes, curves and the like. This transforms the Hogwarts Castle from a microscale LEGO kit into a more life-like recreation of its on-screen counterpart.

Live-size features at a miniature scale |

Stacking up to LEGO’s micro scale, the Hogwarts Castle is able to put all 6,000 of its pieces to use unlike any other set before. Much of the UCS Millennium Falcon’s high part count is utilized to achieve its minifigure scale. But here LEGO has managed to find a balance between eye-catching details on the outside of the castle as well as clever inclusions on the inside.

The castle has everything from intricate stone-work on its many walls to miniature chairs and tables. There are just simply too many wonderful inclusions here to mention them all, but the way LEGO has managed to recreate such notable aspects of the life-size version is really just astonishing.

All of these details do come with the trade off of being more fragile. Things like the lanterns, spires, trees and other less sturdy additions have a tendency to break off when moving around if not handled properly. 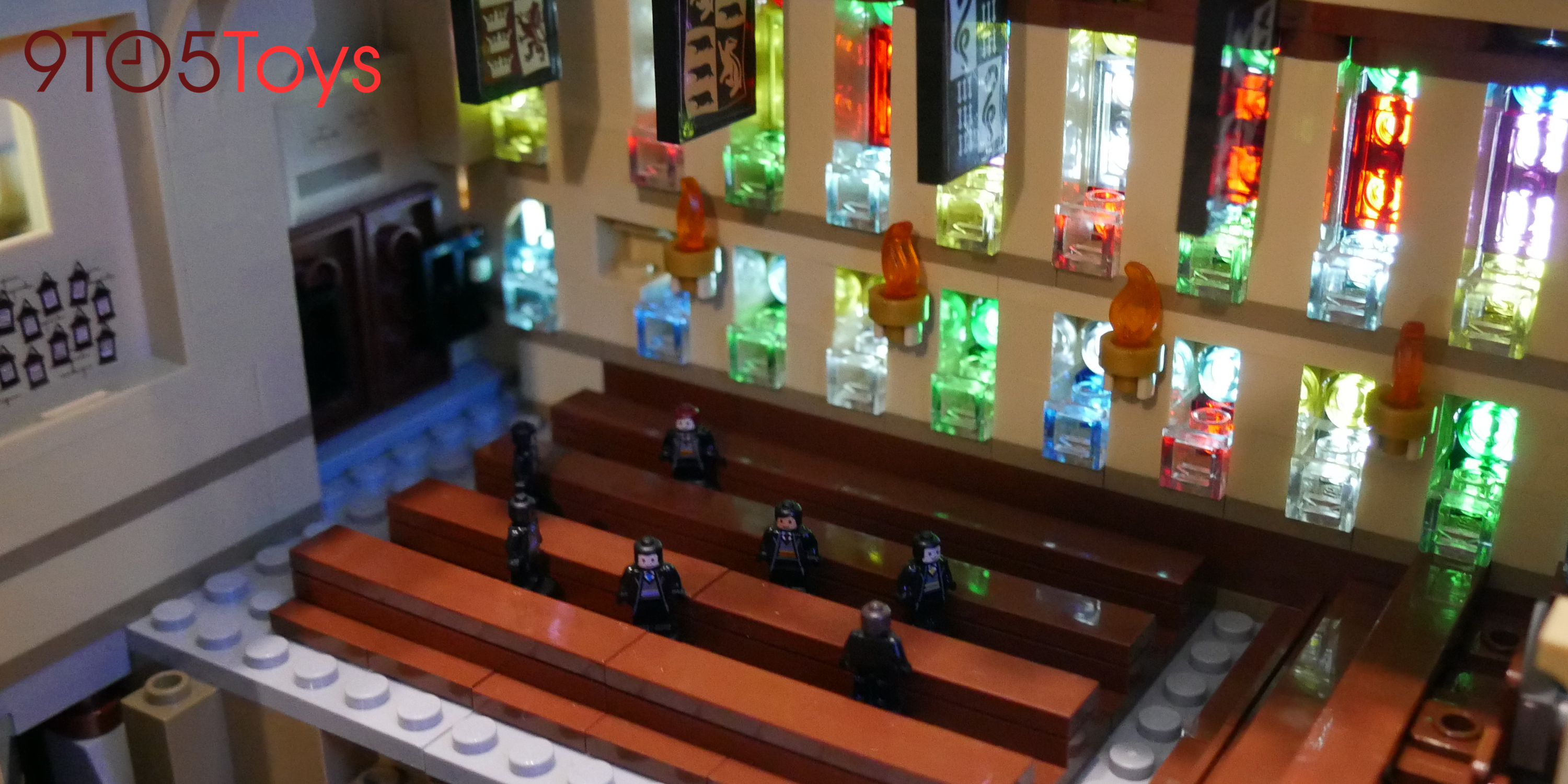 Of course all of these impeccable details can be included thanks to some even more impressive building techniques. In the past we’ve raved about spectacular LEGO line of Architecture sets are, and the Hogwarts Castle doesn’t stray far from the crowd. In fact, with the same level detail and a more comparable scale, it’s easy to think of it as the largest Architecture kit to date.

Amongst several masterful techniques, a few more notable ones caught my eye throughout the building processes.

By far the technique that yields the most striking results, the ubiquitous stained glass sections combine a few different elements to pull off a beautiful final result. You’ll find these glass sections scattered throughout the build, but many are located on the facade of the Great Hall. Paired with a light source, the set ends up with a really phenomenal effect.

The castle’s many columns, towers and spires are equally as eye-catching, which take advantage of quiet a few different layouts to achieve various sizes and shapes. Some more basic ones simply use a series of stacked round 2×2 bricks, while others like the massive center tower, take advantage of layered slopes. The fact that there are so many towers in the set and that LEGO mixed up the techniques just about every time is pretty noteworthy and keeps you on your toes throughout the build.

As boring as something like rock work may seem, the Hogwarts Castle uses some pretty interesting techniques to achieve its rugged foundation. Much of the overall look can be contributed to the larger sand-colored rock elements, but paired with different sized slopes, accomplishes a pretty clever facade with minimal parts-usage.

After making your way through assembling the kit’s impressive techniques, intricate details and putting all 6,000 pieces in their places, you’re left with one absolutely stunning final build. While hours upon hours of building are required to finish the model, it absolutely pay off, as there’s no other LEGO set out there that stacks up to something as thoughtful and magnificent.

The Hogwarts Castle is a perfect pairing of striking details and clever cutaways of the inside. It hovers between being a great shelve model and microscale playset, a hard feat pull off at that.

The front half shows off a jaw-droppingly gorgeous depiction of the iconic wizarding school, but turning around to the back half showcases a variety of scenes from the entirety of the Harry Potter film franchise. Throughout the many rooms and sections of the castle, you’ll find at least one reference to each of the films/novels. There’s everything from the Chamber of Secrets, Mirror of Erised to Dolores Umbridge’s Office and the Defense Against the Dark Arts classroom.

There are also two little additional builds which go alongside the main castle. Both are on the smaller end, but are neat inclusions that just about every Harry Potter fan can appreciate. The Whomping Willow is the more noteworthy of the two, but Hagrid’s Hut is also a clever micro build.

Because the Hogwarts Castle is based around LEGO’s microscale, you won’t find the typical plentiful assortment of minifigures that other kits of this caliber include. The set only comes with four minifigures, one for each of the original Hogwarts house founders, and manages to make up for that with how phenomenal they are.

Each have double-sided printings and both of the women figures have all-new printed dress pieces, which are a nice touch. The four founders miniatures are exclusive to the set, and odds are they’ll stay that way for quite some time. 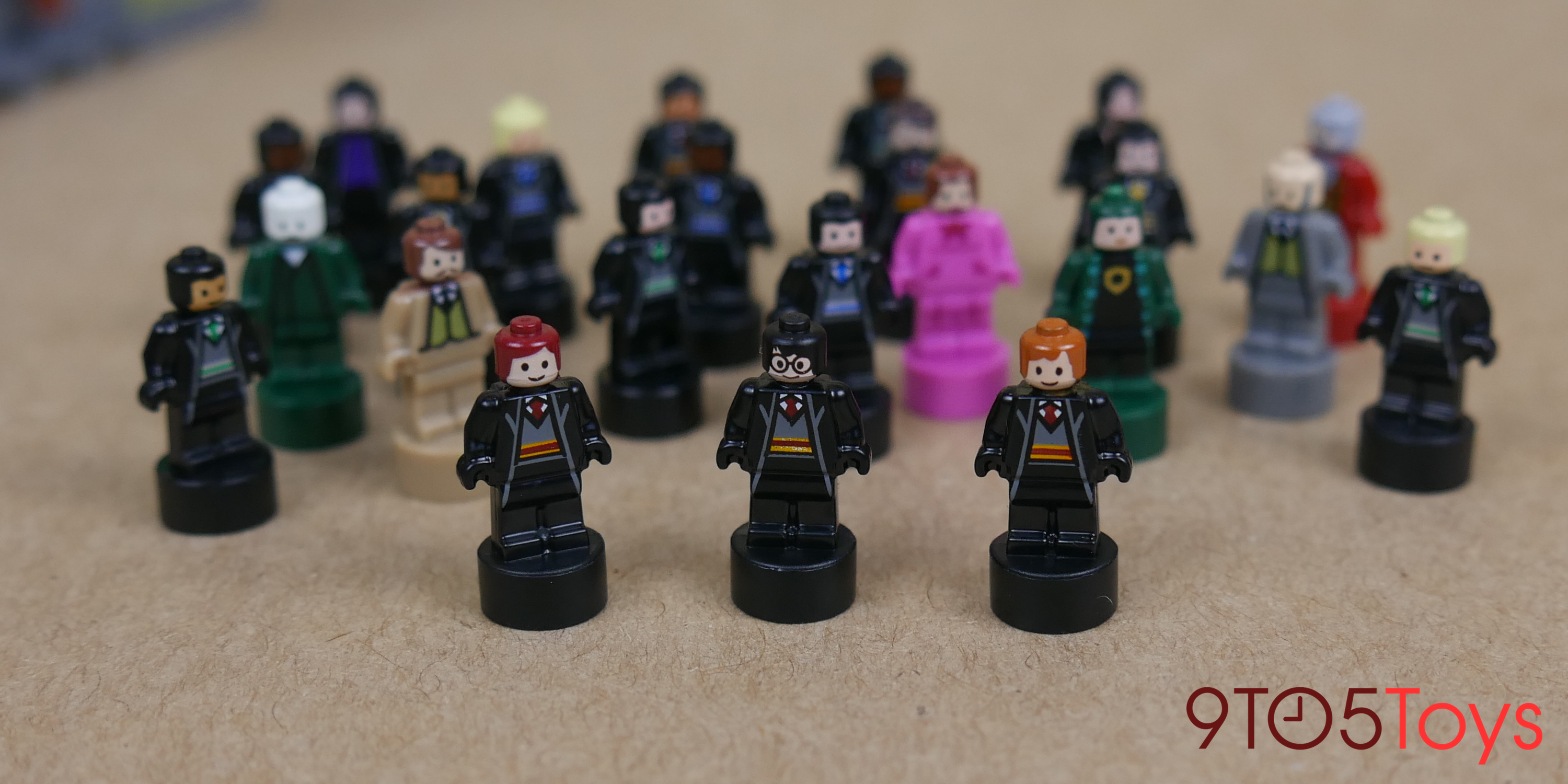 To fit in with the miniature scale, LEGO includes 27 microfigs to place within the castle. You’ll get twelve non-specific student figures, three for each of the different houses alongside Harry Potter, Hermione Granger, Ron Weasley, and Draco Malfoy.

All of the microfigs have surprisingly high levels of detail for their size and even though they’re as small brick-built figures come, they still are instantly recognizable as their distinct characters.

The new Hogwarts Castle stacks up to one of the most impressive sets on the market today, or really in the entire history of LEGO. Given that it’s the second largest of all-time, that shouldn’t be much of a surprise. But there’s more to the set than just its massive size. The amount of accuracy, charm and details included in the model take it to a level that just no other kit has managed to reach.

Whether you’re a fan of all LEGO or just a Harry Potter enthusiast, the Hogwarts Castle is one hell of a fun build. It’s an absolute joy to assemble and stand apart from every other ultimate collectors set released to date.

There are a few negatives with the set though. Some parts seem to look partially incomplete with how many exposed studs there. However the big issue that presents it self with the castle is size. It’s just absolutely ginormous and it’s going to be tricky finding a place to display this. 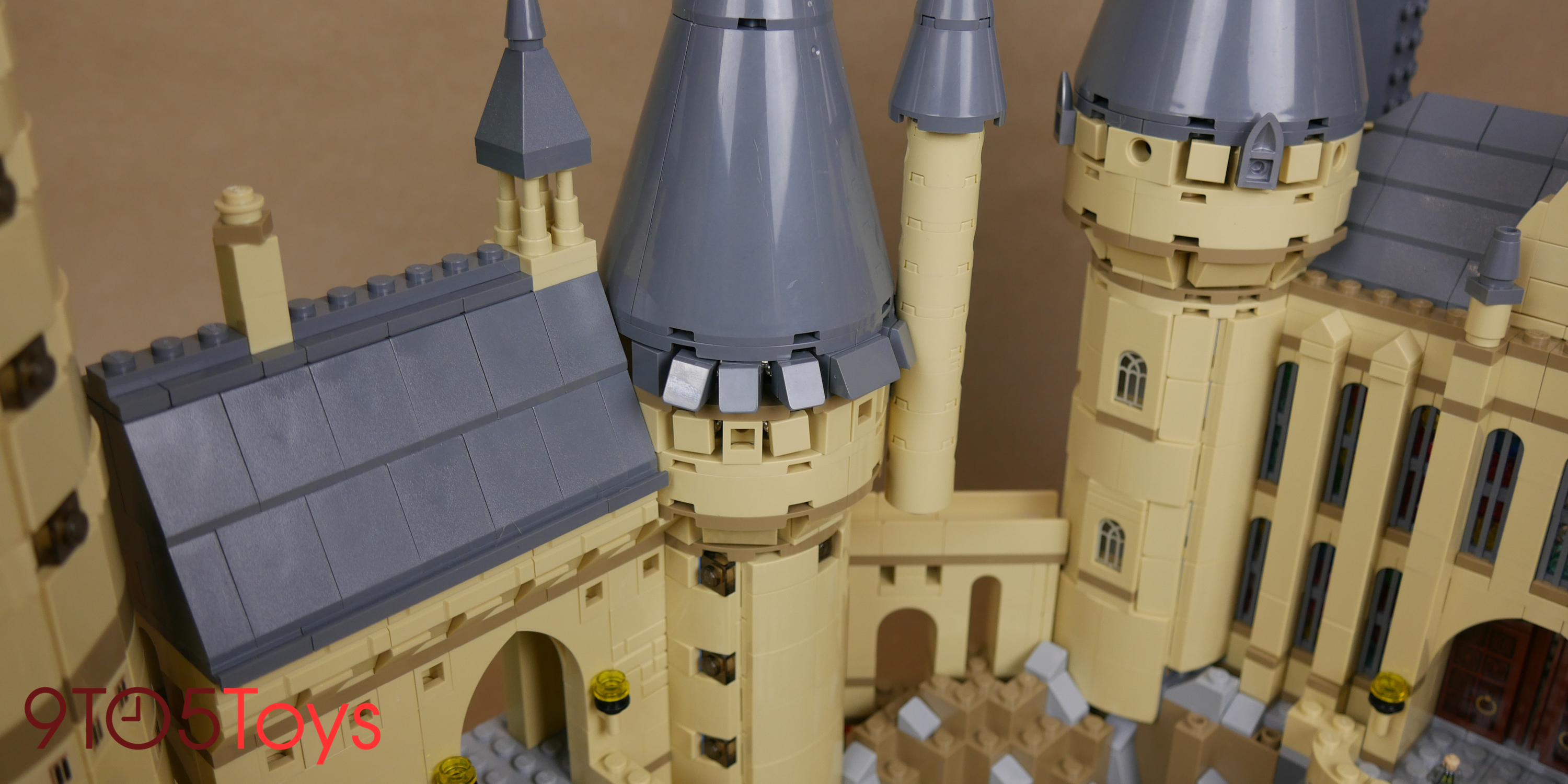 But with a $400 price tag, you may be wondering if bringing home the 6,000-piece set is worth it? I ordered the kit without a second thought and haven’t looked back. Ultimately, if any part of you thinks you’ll enjoy building the castle, I can almost guarantee you’ll love it.  But for many, a several hundred dollar LEGO set is just going to be off the table, which is completely understandable.

Still, the Hogwarts Castle lives up to all the hype, and will make a magical addition to any Harry Potter fan’s LEGO collection. LEGO VIPs can order the set now, but for everyone else you’ll have to wait until September 1st to bring it home.