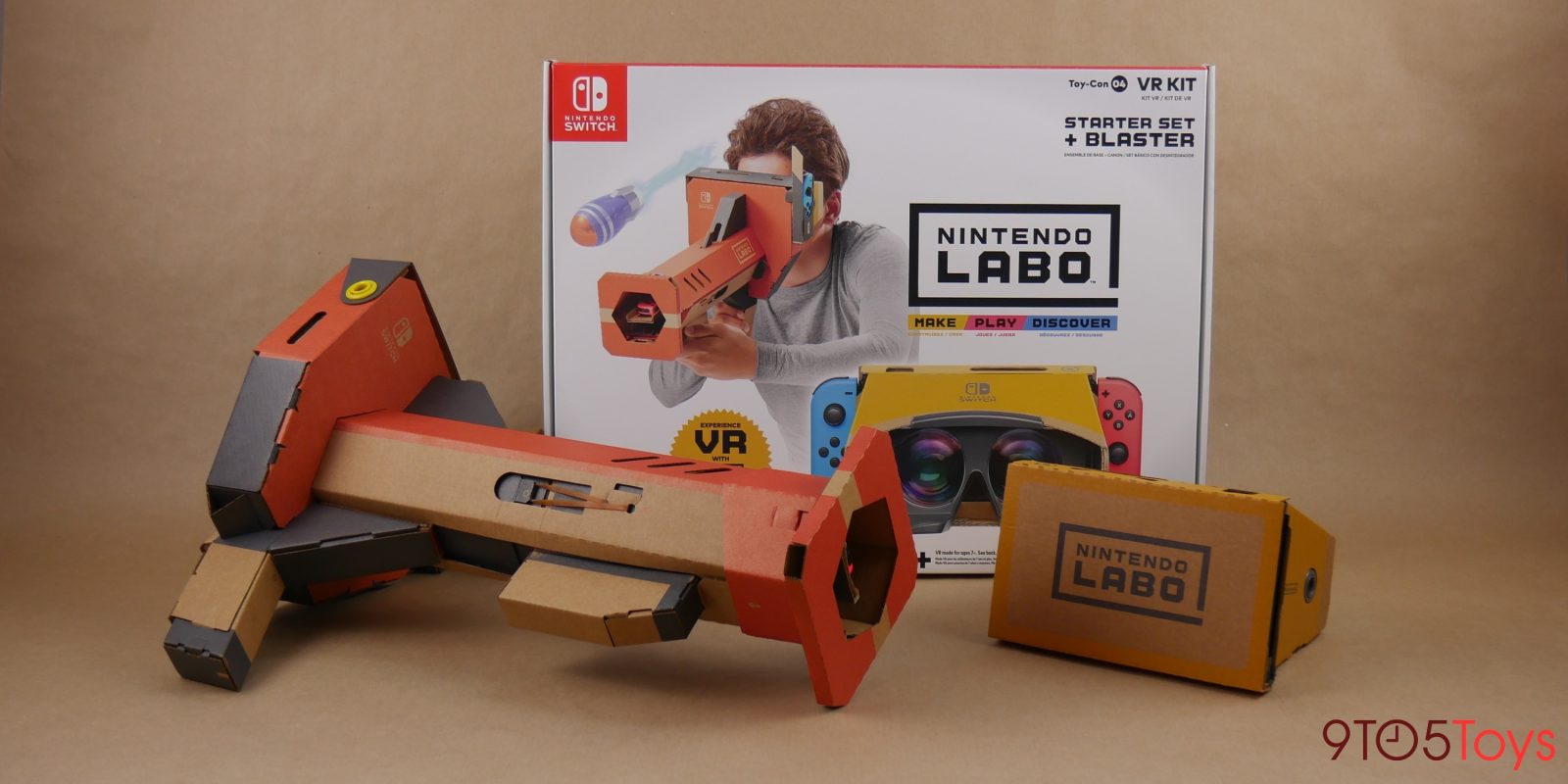 Nintendo has shown us twice now that cardboard can be used for more than just boxes with its Labo construction kits. The company’s latest release of creations entered with an even bolder proposition, can cardboard be used for console-level virtual reality? Nintendo Labo VR Kit imbues your Switch with a one-of-a-kind, interactive gaming experience. Head below for our hands-on look at how cardboard can transport you into the virtual world.

Continuing its pursuit of STEAM-oriented cardboard builds, Nintendo released two different versions of its latest Labo creation. There’s the Starter Set + Blaster as well as the full VR Kit. A more entry-level option enters with a $40 price tag, while the latter will run you $80. Today we’ll be focusing our attention on the starter kit, which includes a virtual reality headset alongside a cardboard blaster.

Nintendo’s Labo VR Kit is the most complex of its now four different cardboard creations. There are two different parts of the set, the first being the headset and then the Toy-Con Blaster second. The headset utilizes a new lens piece to magnify images correctly when placing the Switch near your face. 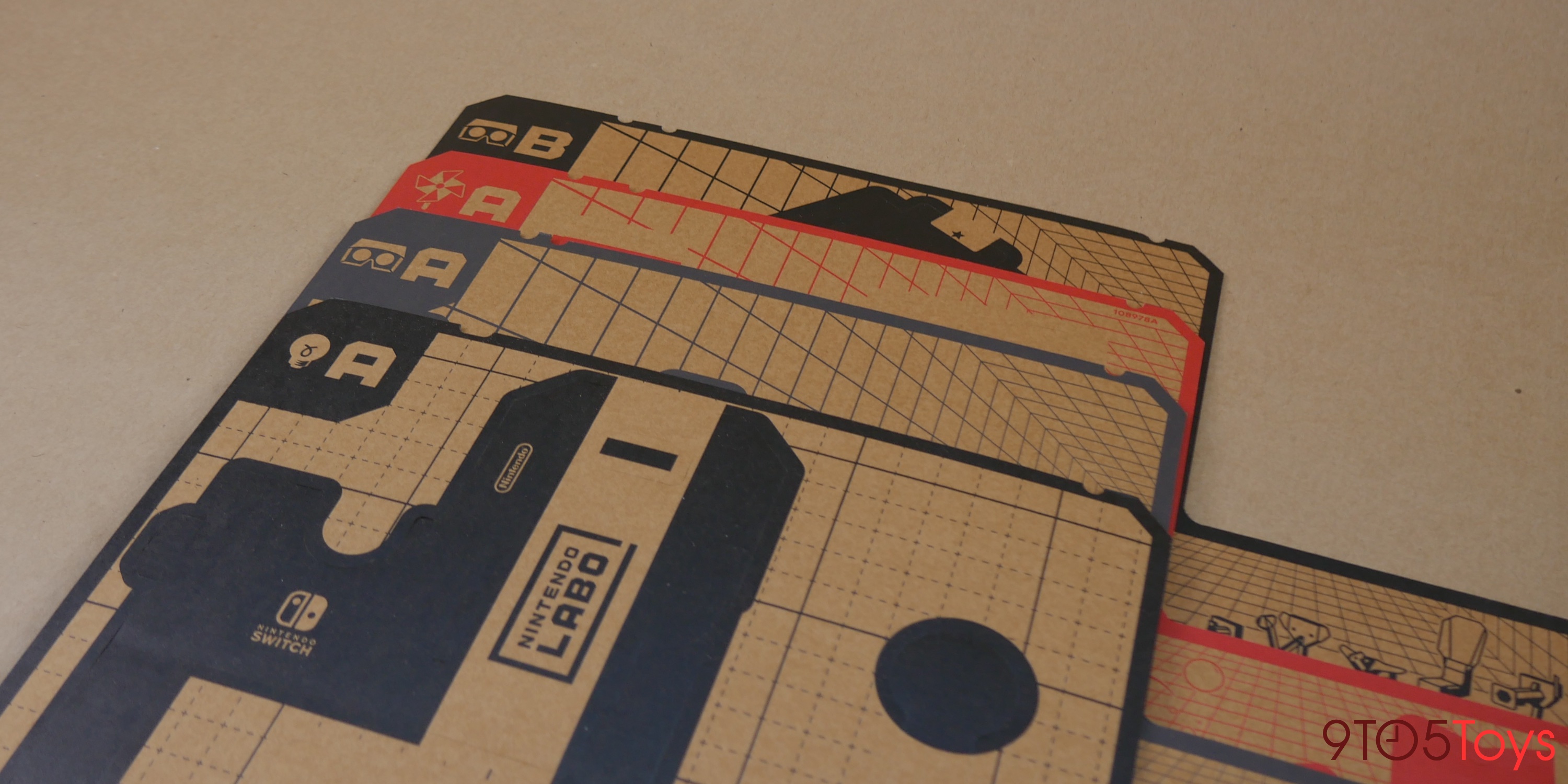 Then there’s the Blaster, which is the star of Nintendo’s latest. This Labo VR creation utilizes an interesting cocking mechanisms which adds a fun level of realism to the accessory. Pulling back on the barrel’s hand grip loads an internal component that is propelled forward when pulling the trigger.

Nintendo has returned to its original style of arcade-like games for its latest Labo release. With the Vehicle Kit, the experience was more of an open-world than just a selection of different games. Here, you’re looking at a multi-level game that differs from both previous releases. 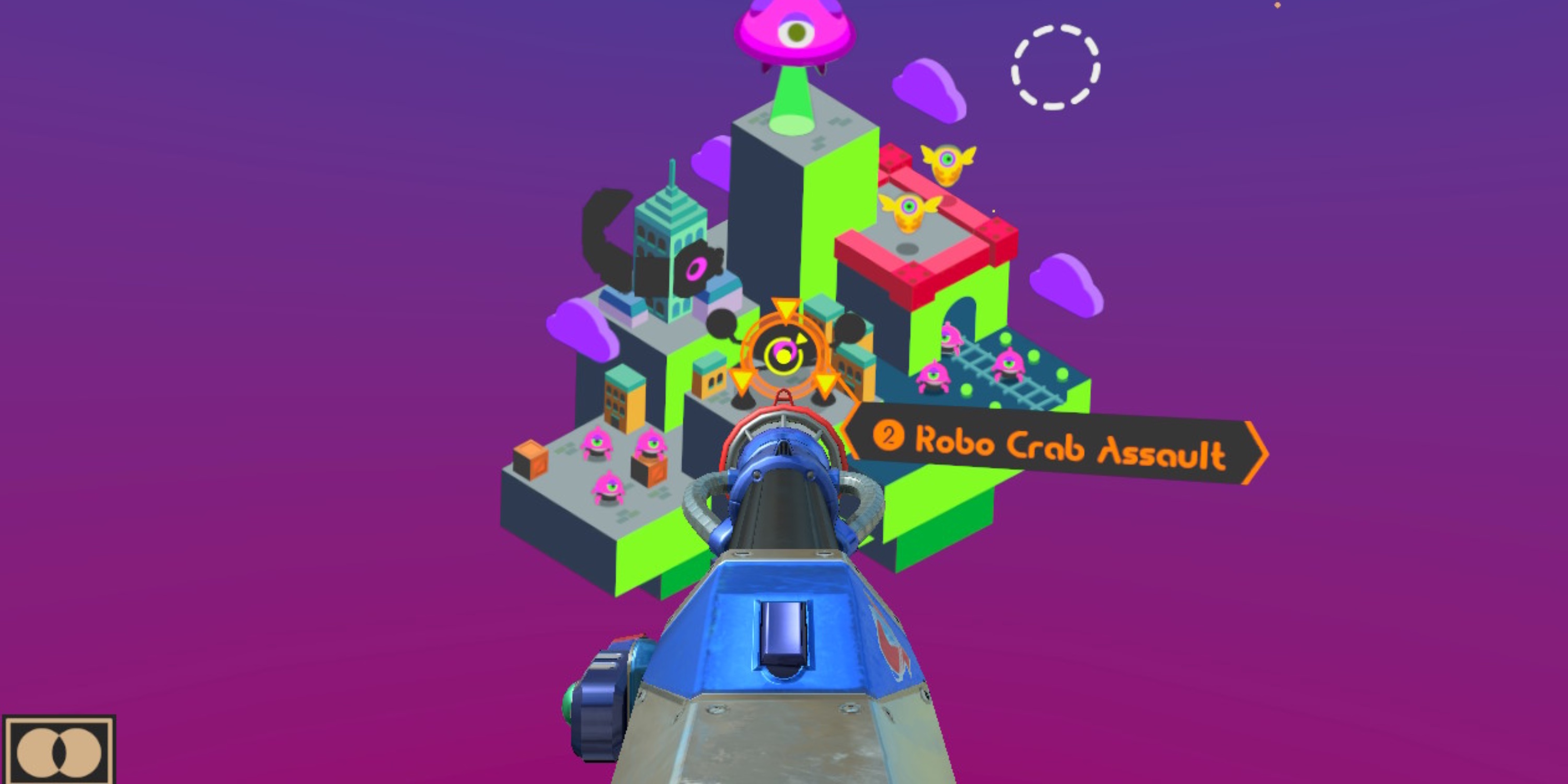 Six different levels comprise the main game, which all take a different spin on the shooting gallery concept. Some are rail shooters while other place you on a roller coaster, have you navigate dark landscapes or take on harder enemies in boss fights. There’s still the same goal of racking up a high score, but each level varies how you’ll actually accomplish that.

Alongside the main focus of the Labo VR Kit, Nintendo has also included 64 different mini-games. Each one uniquely utilizes the Switch’s newfound VR capabilities. Some require you to don the Toy-Con Blaster, while others just require the headset. Some even have the option of ditching the headset all-together. 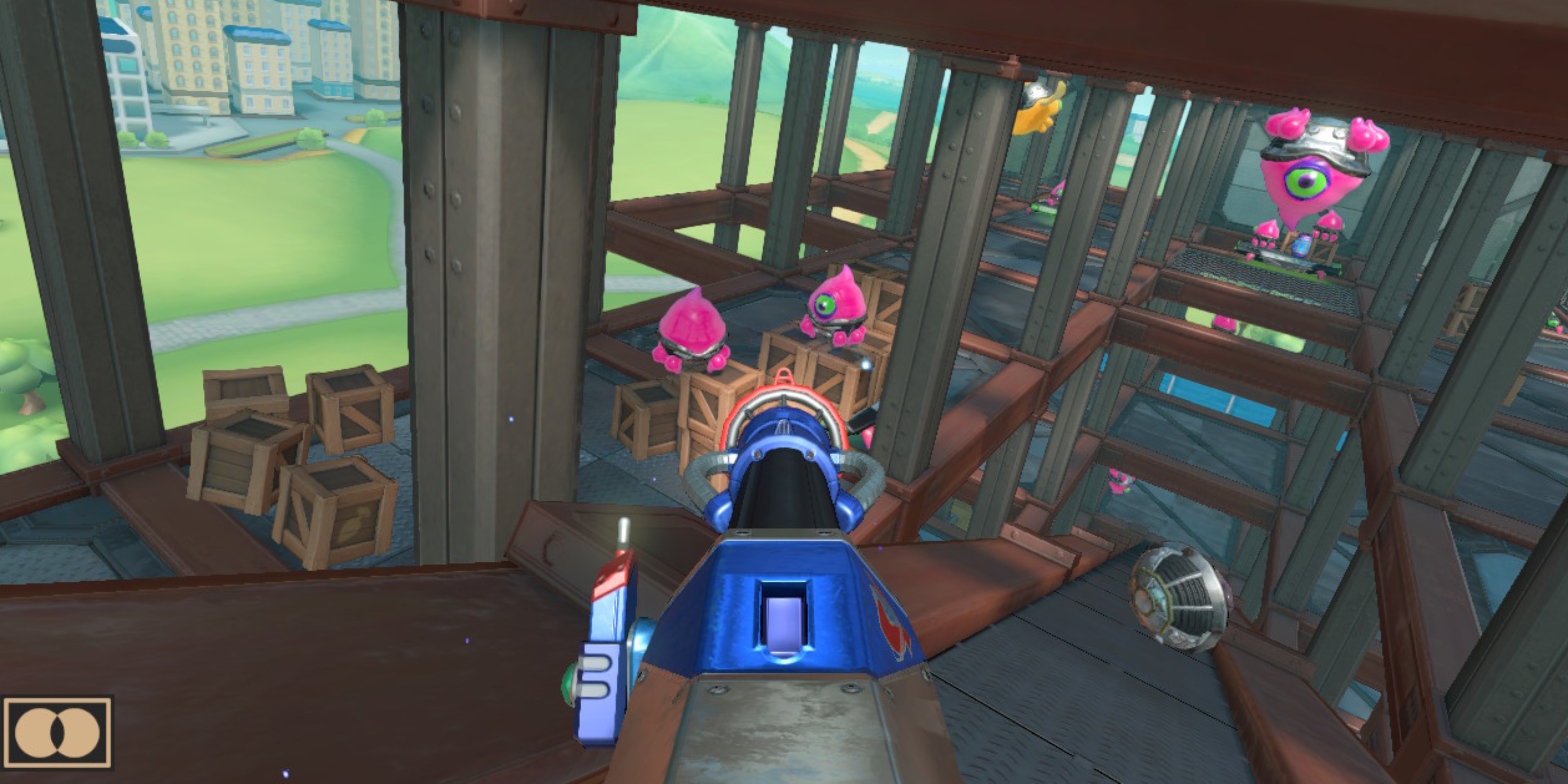 Right out of the gate, it’s worth noting that Nintendo’s Labo VR kit stands in a class of its own. It shouldn’t be compared to high-end PC-based VR, but it’s well beyond what exists with smartphone-centric headsets. It’s not about immersion, but creating a fun and interactive experience. Nintendo themselves notes that the kit is geared toward “simple, family-friendly virtual reality”, and Labo VR certainly achieves that mission.

The Switch’s 1280 x 720p screen resolution may raise from eyebrows when looked at in the context of VR. But I personally didn’t find it to be an issue, nor did any of the friends who tried it out. For the type games and length of interactions, the screen proves to be an alright fit for this kind of virtual reality.

Motion tracking is also solid thanks to not only the Switch itself’s built-in gyroscope, but also the two Joy-Cons. It’s not perfect, but with the kinds of games that come included, it works well, and reliably at that too. Not once did I get nauseous or have eye-strain.

Part of that is probably because holding the headset and blaster to your face isn’t exactly effortless. So before your eyes would start feeling any strain, your arms will arguably tire out. Plus most of the games are only about five minutes or so in length, so spending long sessions without looking away from the screen is unlikely. 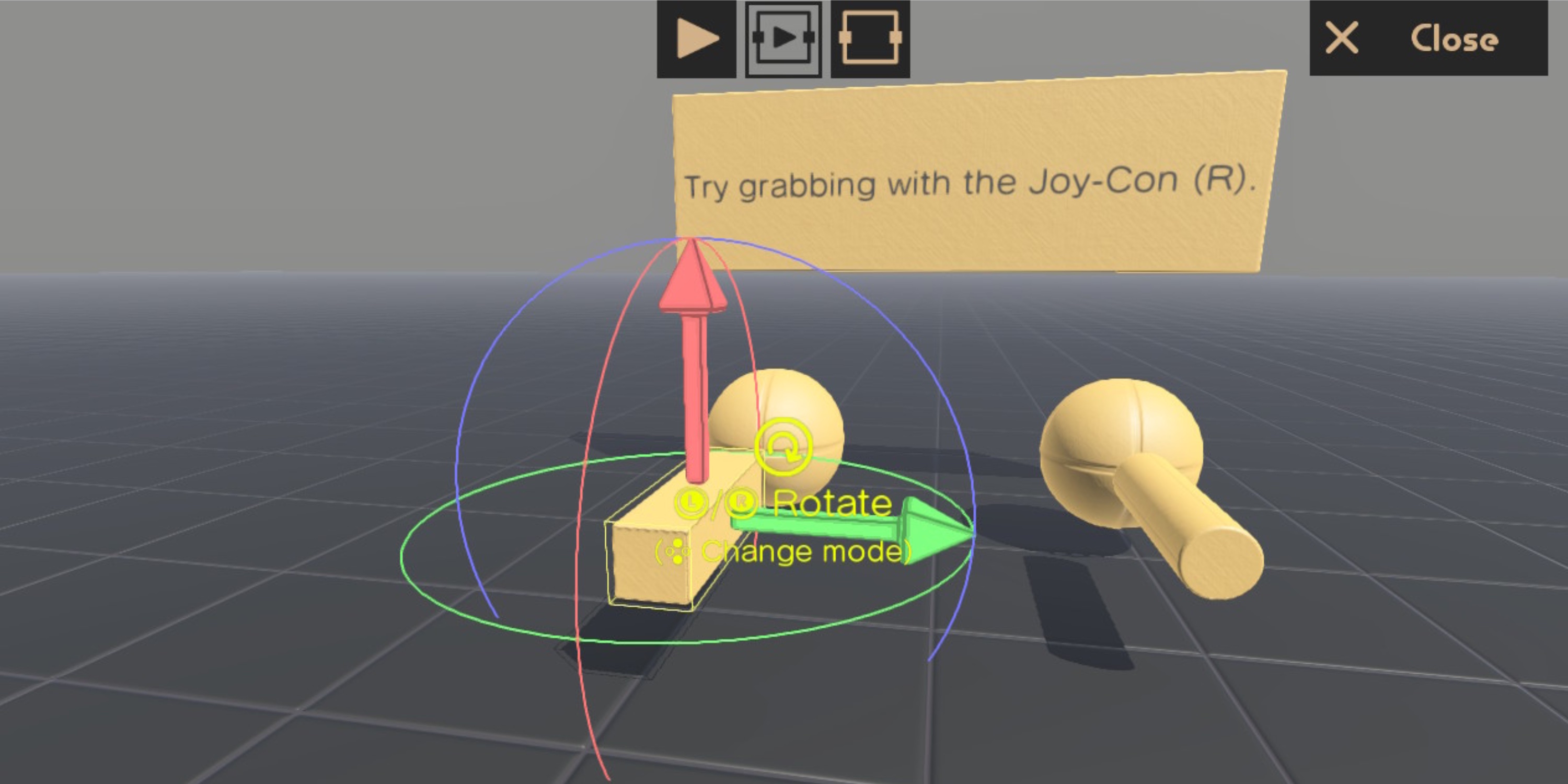 In past reviews of Labo kits, we’ve praised Nintendo’s STEAM-focused coding system. The VR edition of Toy-Con Garage builds upon past implementations, all while taking things to truly another level. Up until now, it would allow you to create software to go alongside physical creations. For instance, you build a guitar that actually plays music and other similar things. Now, the focus shifts from supplementing real-world creations with software, to building full-fledged virtual experiences. 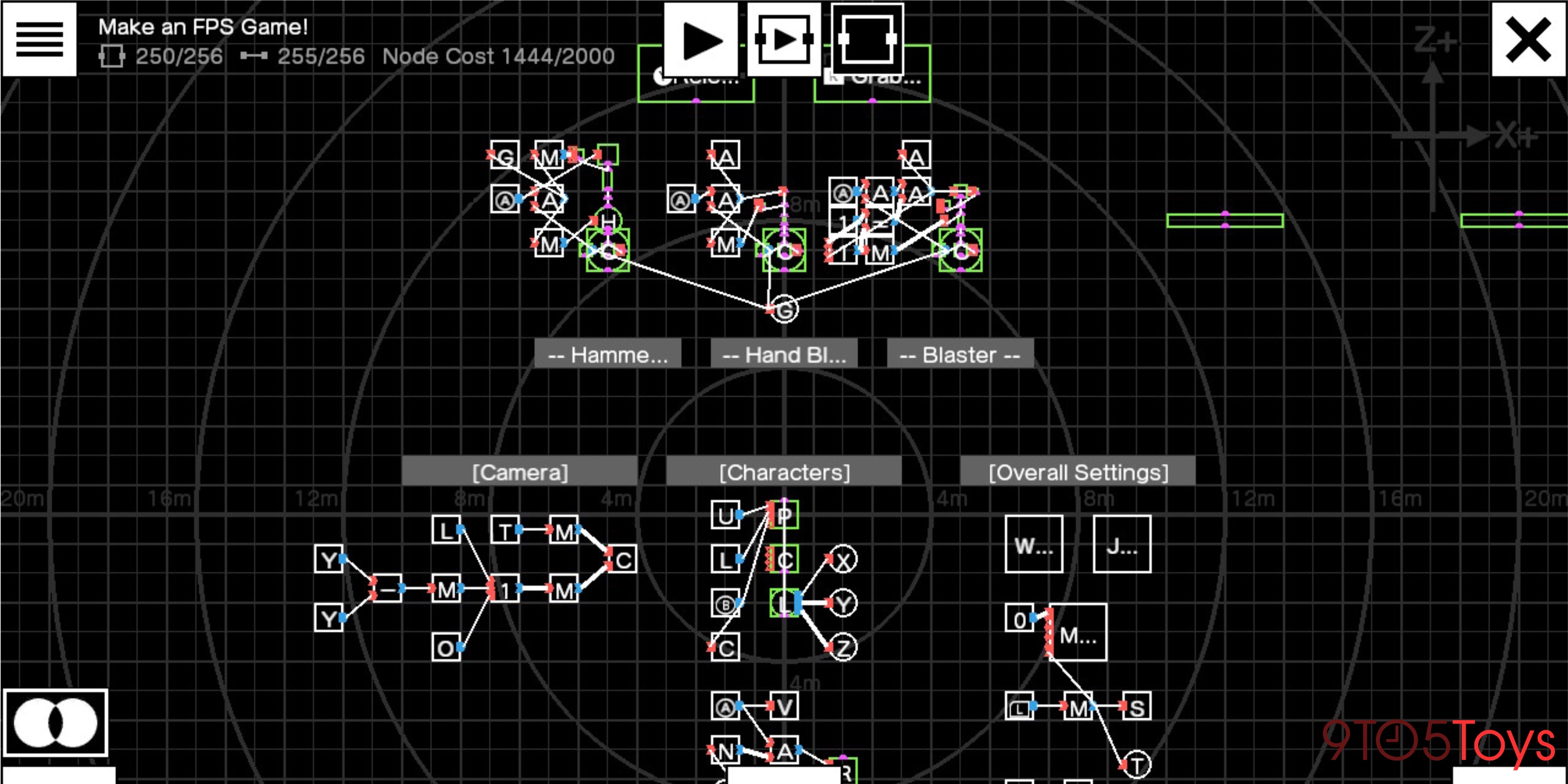 Nintendo’s Labo VR kit allows you to build pretty much any virtual reality experience you could want. We’re not talking about super high-spec graphics or anything like that. But the Toy-Con Garage engine gives you access to recreate or tweak all of the kit’s included games. While there probably is a limit to what can be created, a weekend of tinkering leads me to believe that most won’t find it. 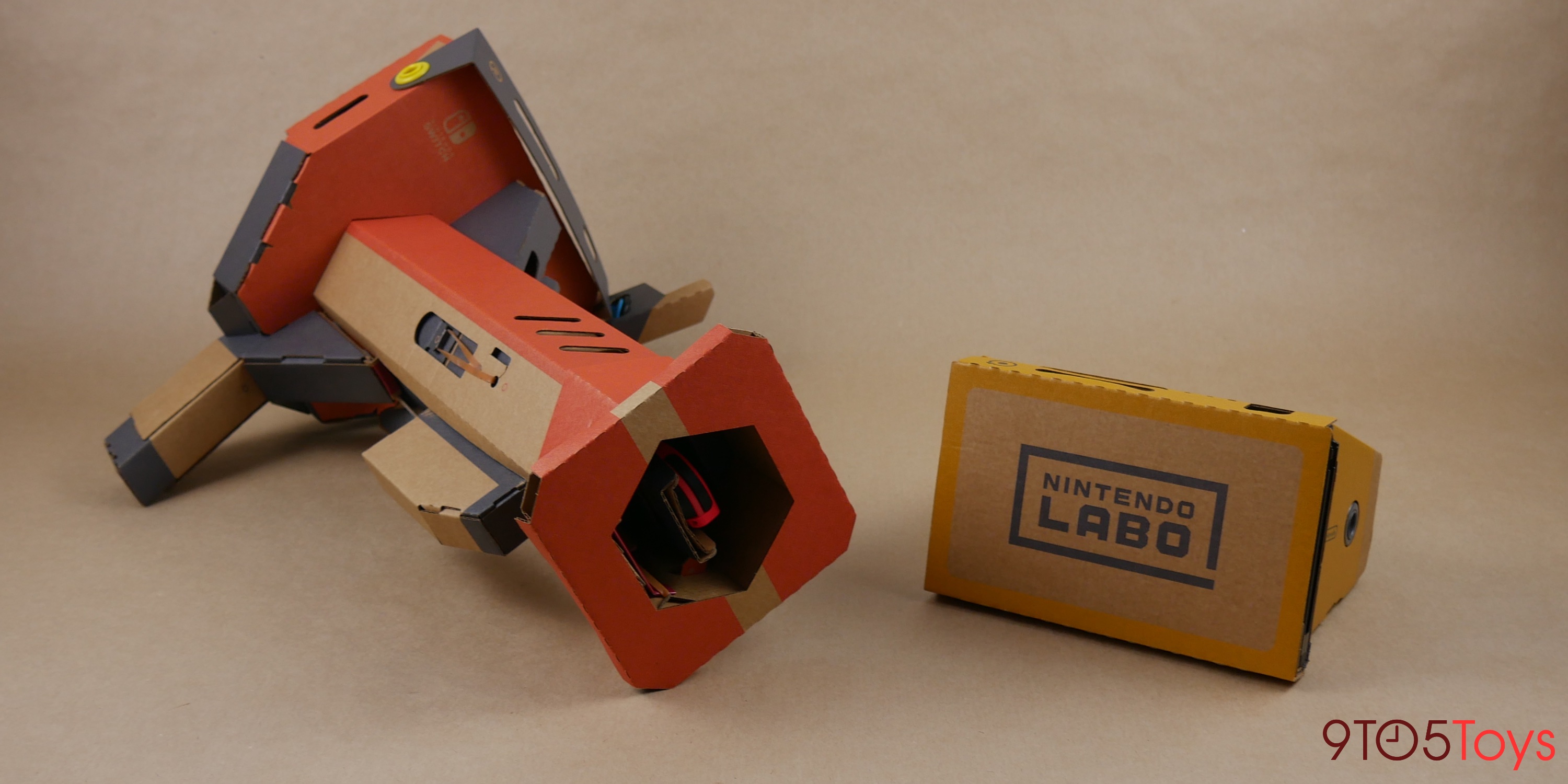 Potential is in no way in short supply here, but some aspects of the Labo VR kit are held back by Nintendo. Several of the games can be played with just the headset and your Joy-Cons, no additional cardboard accessory required. The Toy-Con Headset could definitely benefit from having some kind of way to play without having to hold the console up to your face.

Whether Nintendo would have included a cardboard stand similarly to the Virtual Boy, or a head strap, either option would have been a notable addition.

Then on the software side of things, there isn’t much in the games that really take advantage of the Joy-Cons. The Switch’s gamepad are really solid motion controllers in their own right. Plus with features like HD Rumble, Nintendo could have leveraged these towards a better overall experience. 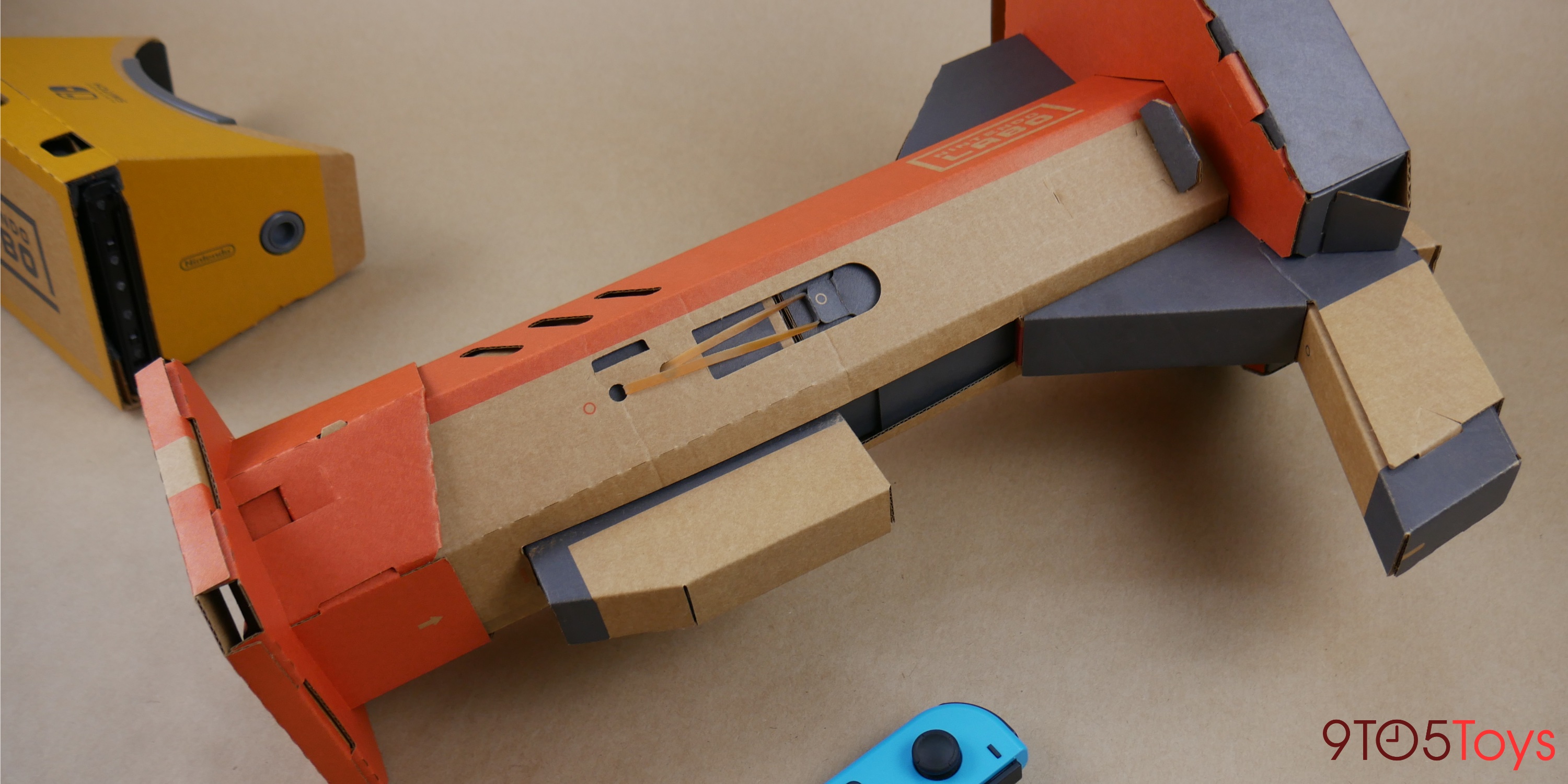 Labo VR is hands down the most fun cardboard creation yet from Nintendo. Each release, I find myself amazed that the company was able to one-up themselves. But yet for the second time, Nintendo has managed to wow me.

Nintendo has also shown that it can bring a fresh perspective to something that has been tried before – entry-level VR. The company hasn’t attempted virtual reality in some time, in fact not since the Virtual Boy in 1995. It’s safe to say Nintendo has learned a lot this time around, but there’s still room for improvements with the Labo VR Kit. 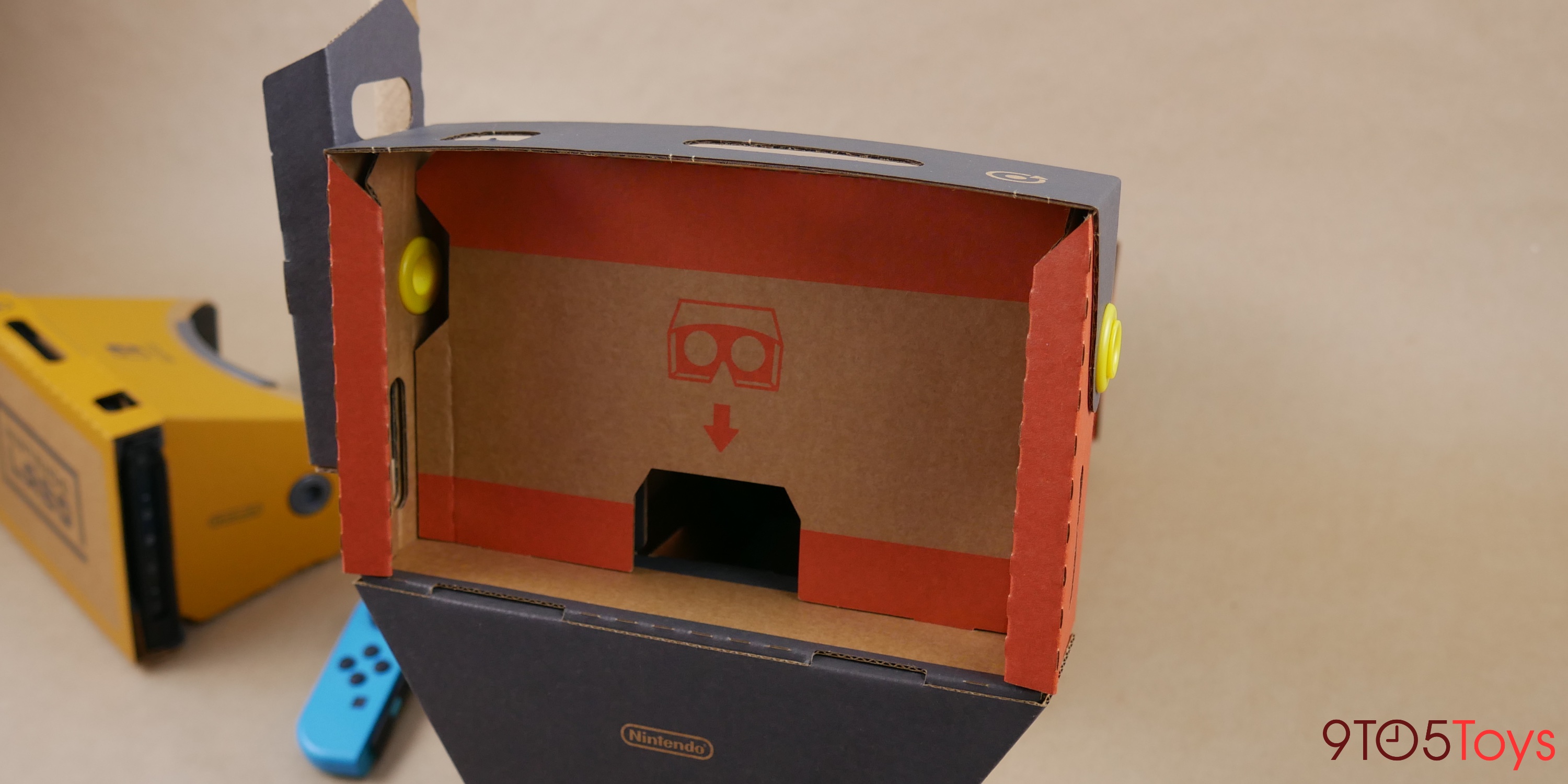 The latest cardboard set takes a step forward for Labo as a whole. Instead of just being an accessory, Labo VR shows that Nintendo is tip-toeing into a virtual reality. It’s by far the most interactive release yet, and gives a look at how future VR-focused release from the company may shape up.

Toy-Con Garage adding VR is a one of the most notable aspect of the release. The ability to create just about anything in virtual reality without having to write a single line of code is deeply impactful, and opens a whole world of possibilities. 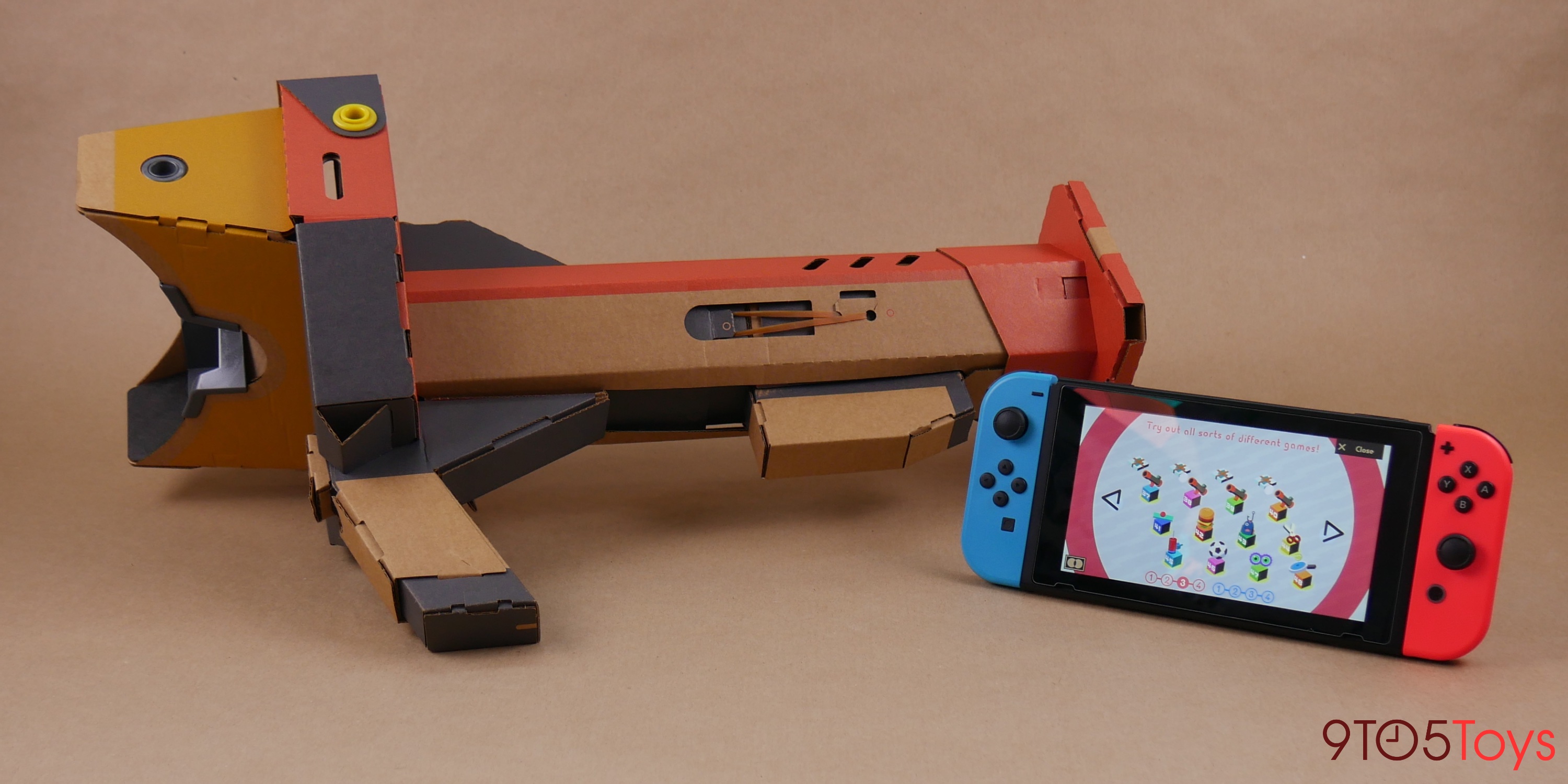 At $40 for Nintendo’s Labo VR Starter Set + Blaster Kit, it’s a compelling offer. If the idea of cardboard accessories has been a tough sell for you in the past, the latest release is worth a reconsideration. Not just because of the more affordable price either. But because this offers the most unique Switch experience yet.

If you’re already extremely into virtual reality, the Labo VR Kit just isn’t for you. But if you’re like me and have little experience, or none at all with VR, then this is an easy recommendation to try out the technology in an extremely entertaining way. Plus, if the idea of designing unique VR experiences is appealing, then it’s an even better value.

Nintendo is also bringing Breath of the Wild and Mario Odyssey support into the mix, which is right around the corner. So depending on how these software updates go, the Labo VR kit could end up being even more of a must-have. But regardless, it’s a dang good entry-level VR platform worth the cardboard it’s assembled out of.