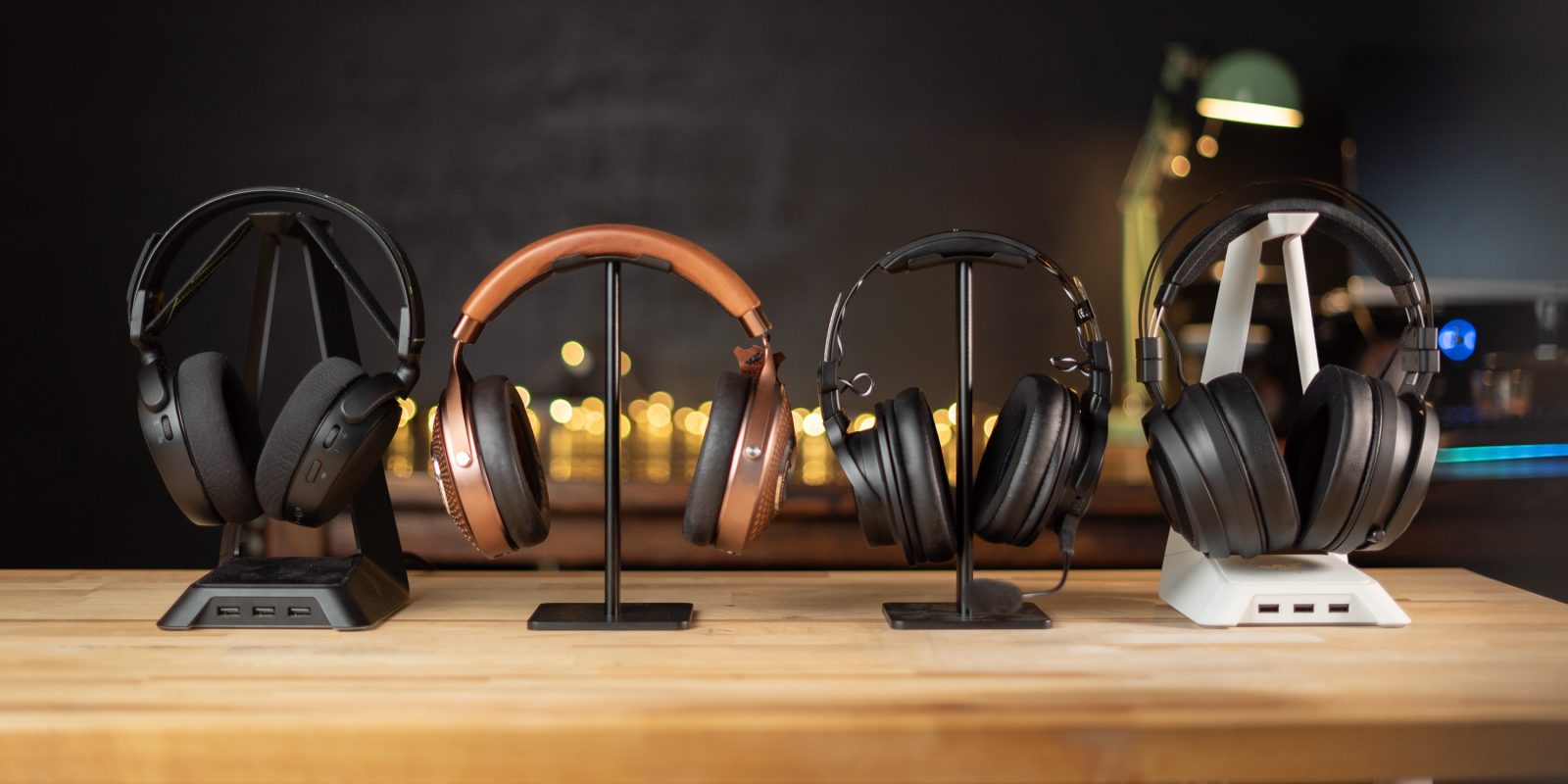 I imagine a new pair of headphones or a shiny new gaming headset is probably a common thing to buy or receive as a gift this time of year. But where do you put that new pair of cans? Do you show it off, lay it on your desk or hang it under? Here are some end-of-the-year ideas for how to give your new audio equipment a nice home.

First off is something cheap and simple, this Amazon choice for headphone stand. I picked up a couple of these for headphone reviews that I’ve been doing and have been pretty happy with them so far. They’re far from feature-packed but do their job well without taking much attention from the headset itself. The three pieces just press together and voila, it’s ready to go. It’s sturdy enough to hold the biggest and heaviest of headphones or gaming headsets and I like that the rest flexes to distribute the weight of the headset a little bit more. Really the only thing that I don’t like about them is the prominent brand on the base of the stand. But if you turn the stand around, it’s not that noticeable – especially for $9. 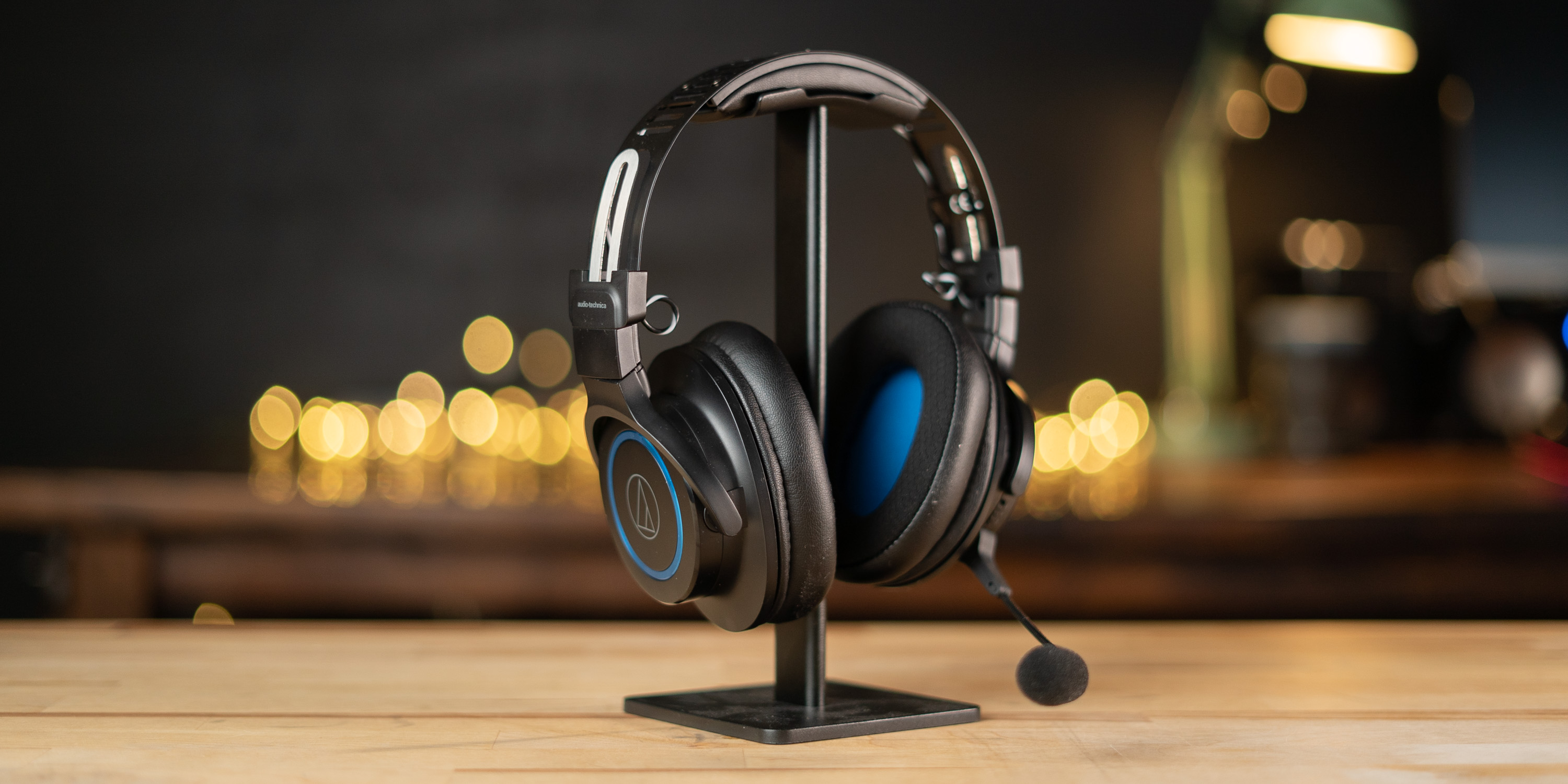 Next up, if space is tight on your desk or battle station, hanging them underneath might be a good option. I’ve used a trusty ole’ nail to hang my headphones on the side of my desk in the past, but the $16 Anchor Pro from Elevation Lab is a much more elegant solution without breaking the bank. An upgrade that doesn’t cost much more than it’s little brother, the Anchor Pro installs easily with adhesive or the included screws and is more than capable of holding a heavy pair of headphones like the Razer Nari Ultimate or the substantial Focal Utopia (though you probably wouldn’t be hiding that). Check out my review of the Anchor Pro from earlier this year for more thoughts. 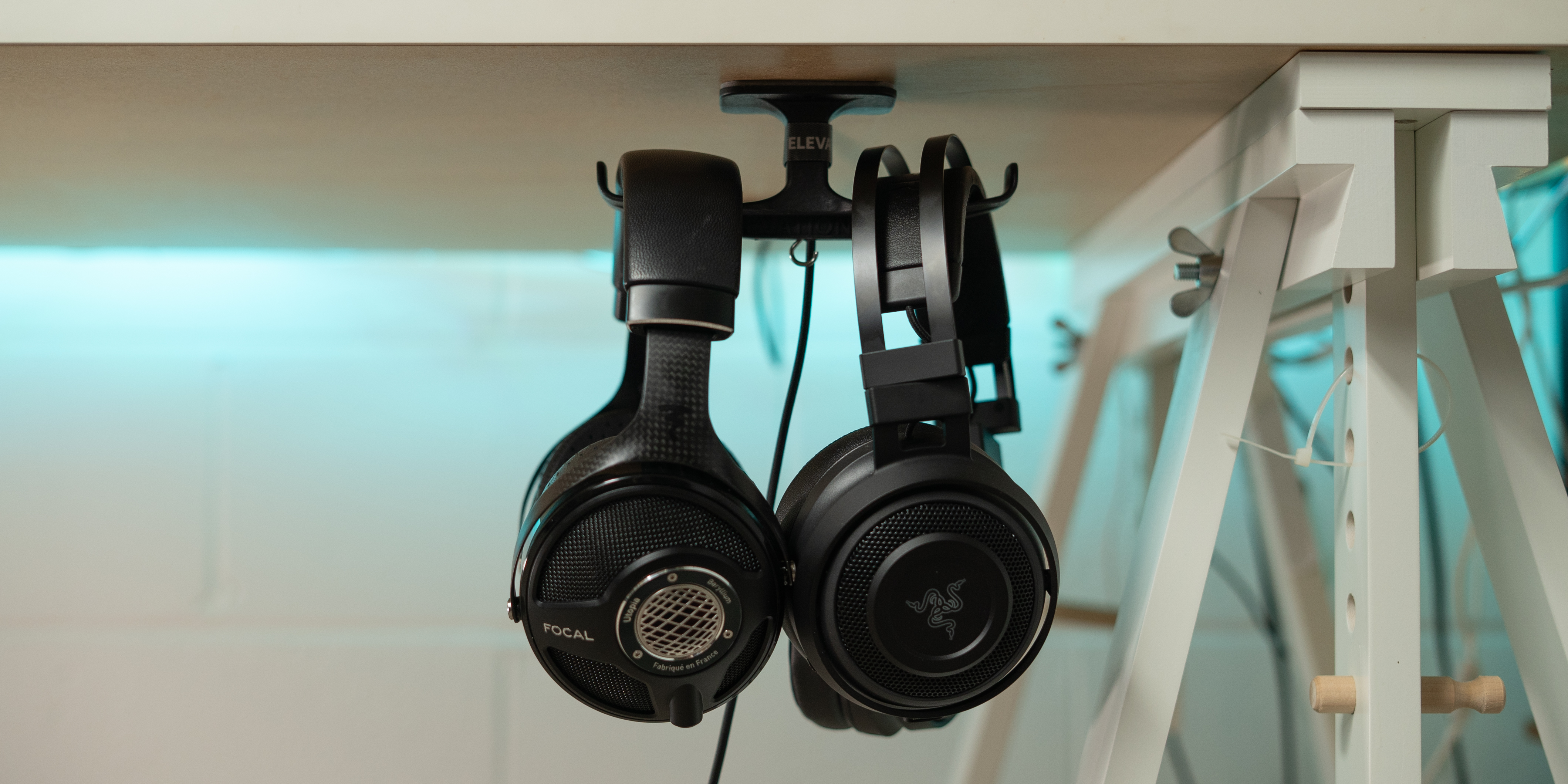 If you want some added flair and utility to your headphone stand, the Razer Base Station Chroma is a great way to show off your headset with RGB and the added benefit of extra I/O via the three USB 3 ports on the front. With three different color options, black, mercury white and quartz pink, the Base Station can make a great upgrade to an RGB battle station – especially if you’re already in the Razer ecosystem. $60 gets a little easier to justify when you get additional functionality and Chroma capability out of your headphone stand. 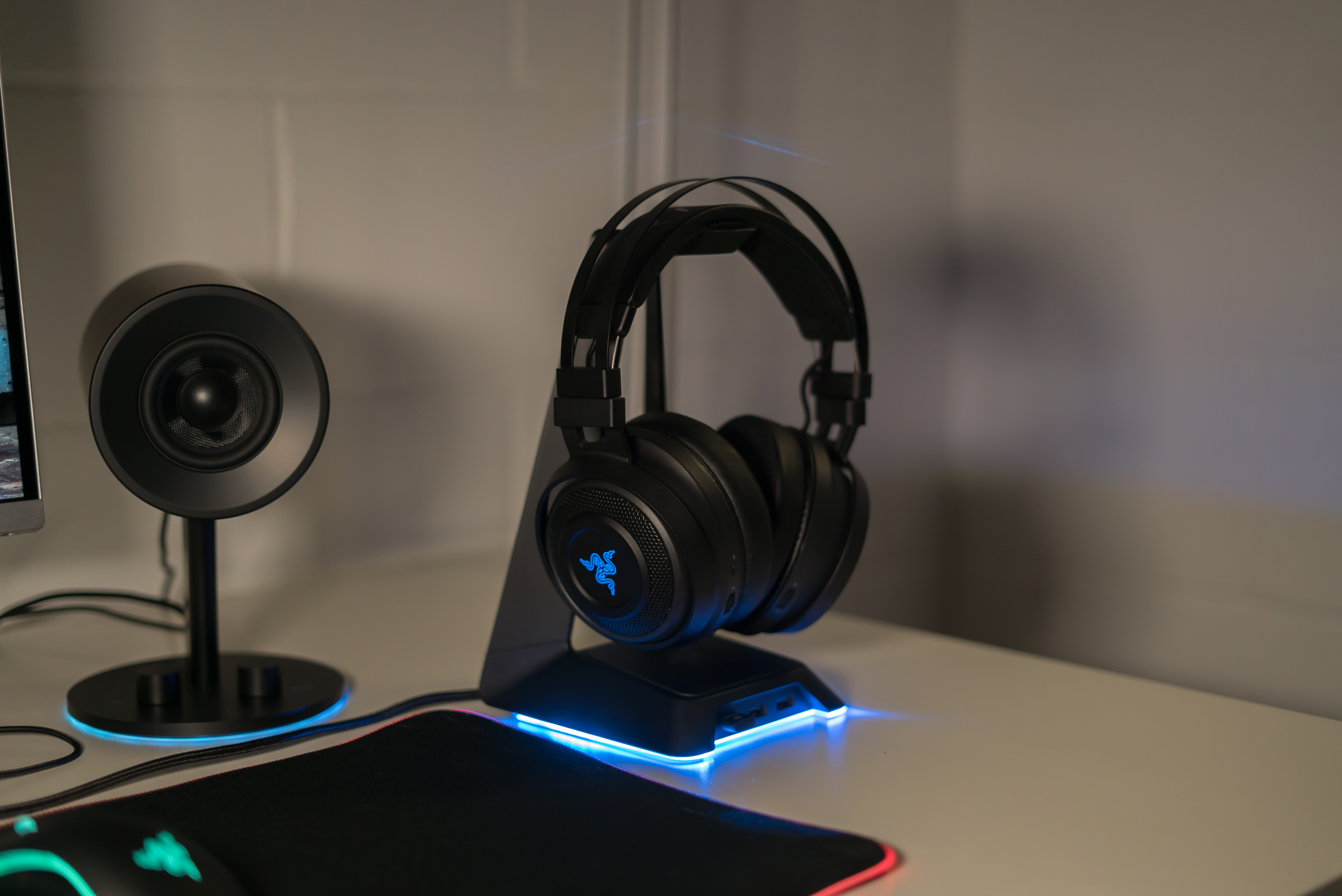 RGB not your thing? Another great option that I haven’t tried out, but I’ve tried some other products from this company, is the wood Headphone Stand from Grovemade. When I took a look at the desk shelf and wireless charger earlier this year, I was blown away by the quality of what Grovemade is making. Their attention to detail and premium materials really shows in their products. But, you’ll definitely be paying more for that quality. Their headphone stand is priced at $120 but it would be a great way to display a new hi-end pair of cans. 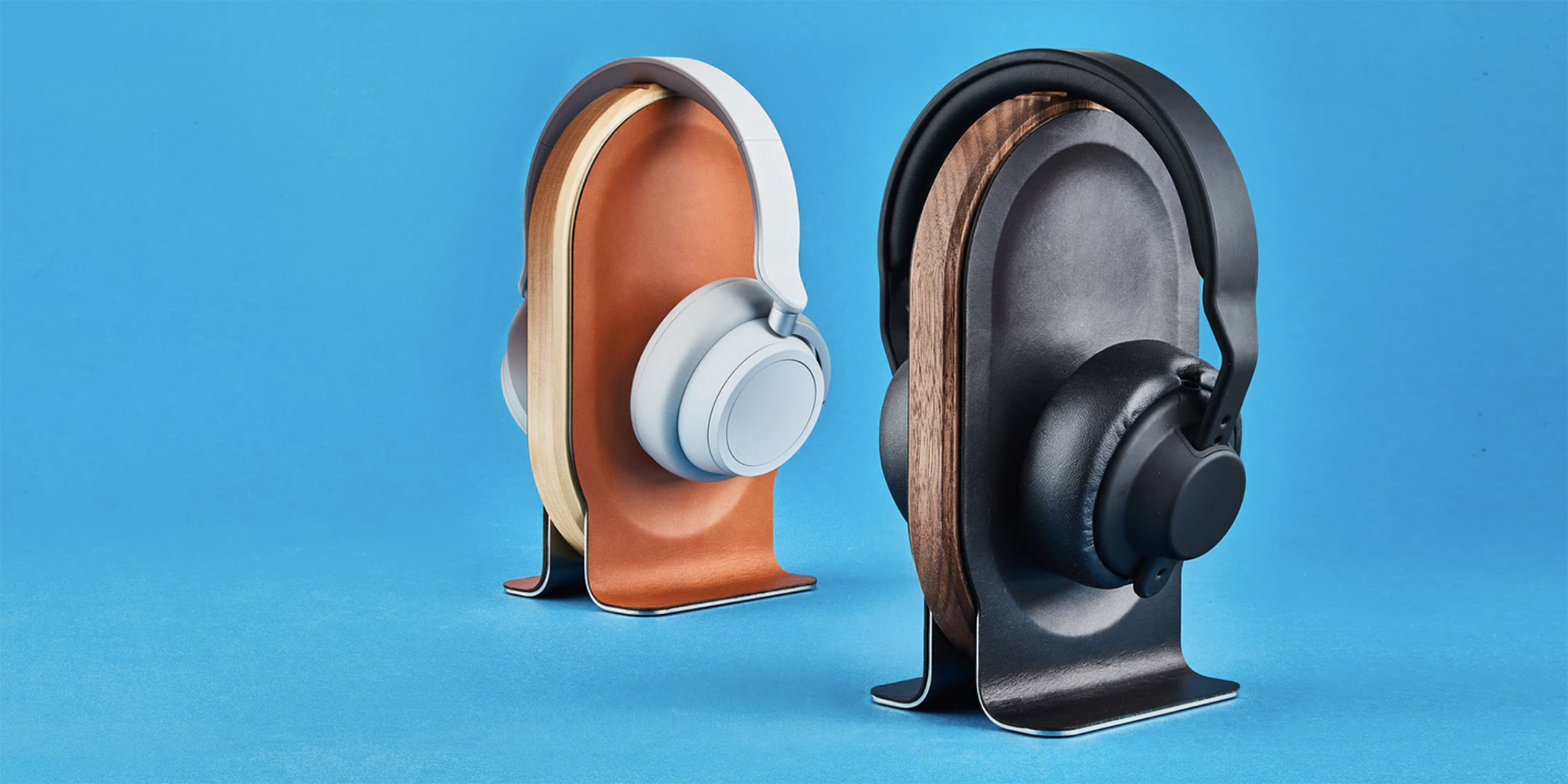 Buy the Razer Base Station Chroma