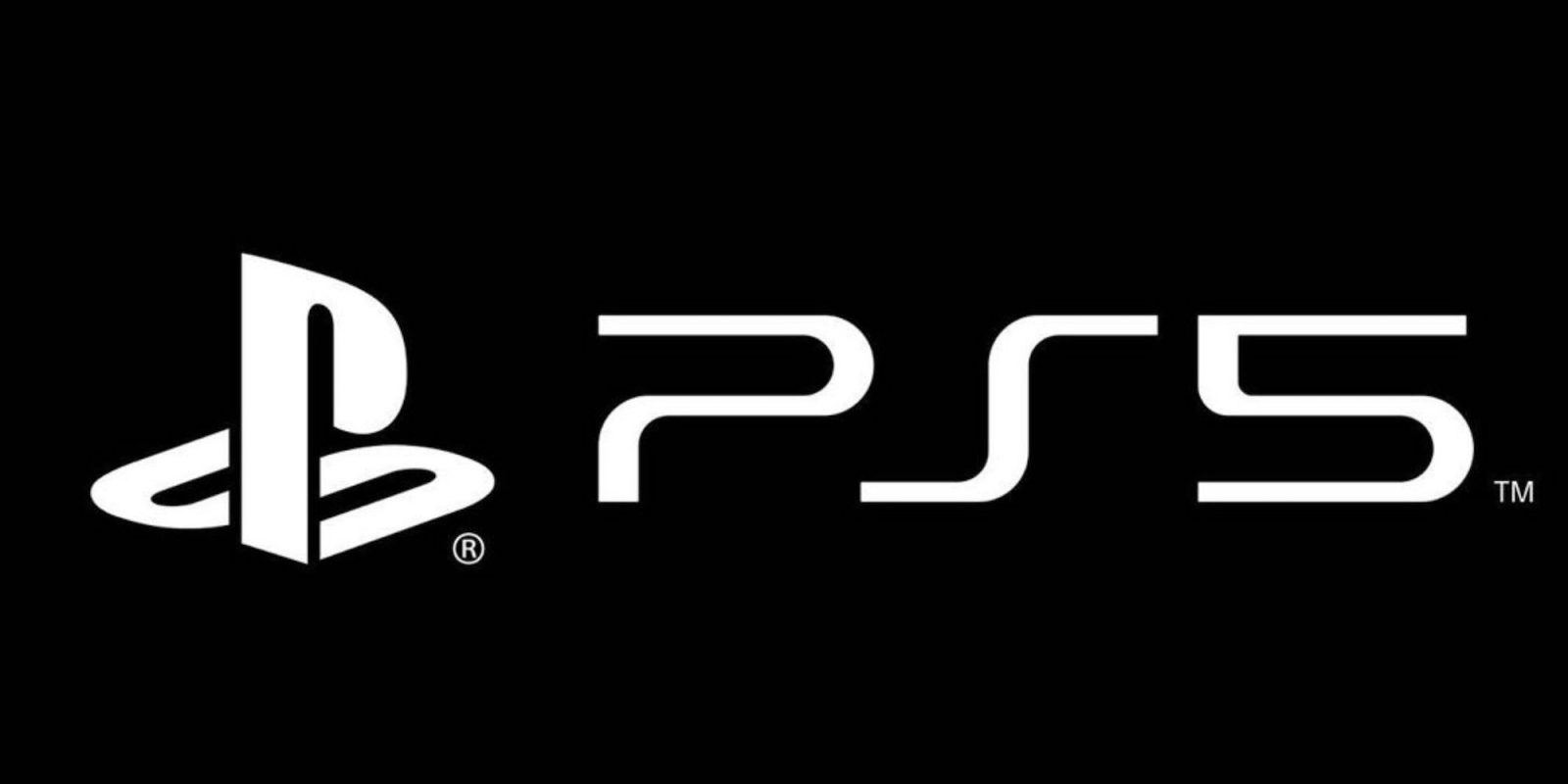 As expected from yesterday’s official tweet, lead system architect at Sony, Mark Cerny has now taken center stage to unveil more PlayStation 5 specs and details. After Microsoft let the whole cat out of the bag earlier this week, it was only a matter of time before Sony jumped into action to bring its loyal fans a closer look at the next generation of gaming, and that it very much did. Head below the fold for a closer look at what we now know about PlayStation 5.

Considering Cerny is the person giving the presentation today, we were expecting some savant-level nitty gritty details on the specs of the machine and the relationship its technology has with developers everywhere. We were very right.

So today is all about the numbers and not about the games, Cerny made a point of saying at the top of the showcase.

The feature most requested by devs was the built-in SSD storage we know PS5 will house. Cerny and the PS5 dev time are trying to decrease the downtime before devs understand enough about the platform before they can actually start developing an experience. With PS4 this time was estimated at about 1 to 2 months, but with PS5 Cerny is confident that time has dropped to about 1-month. 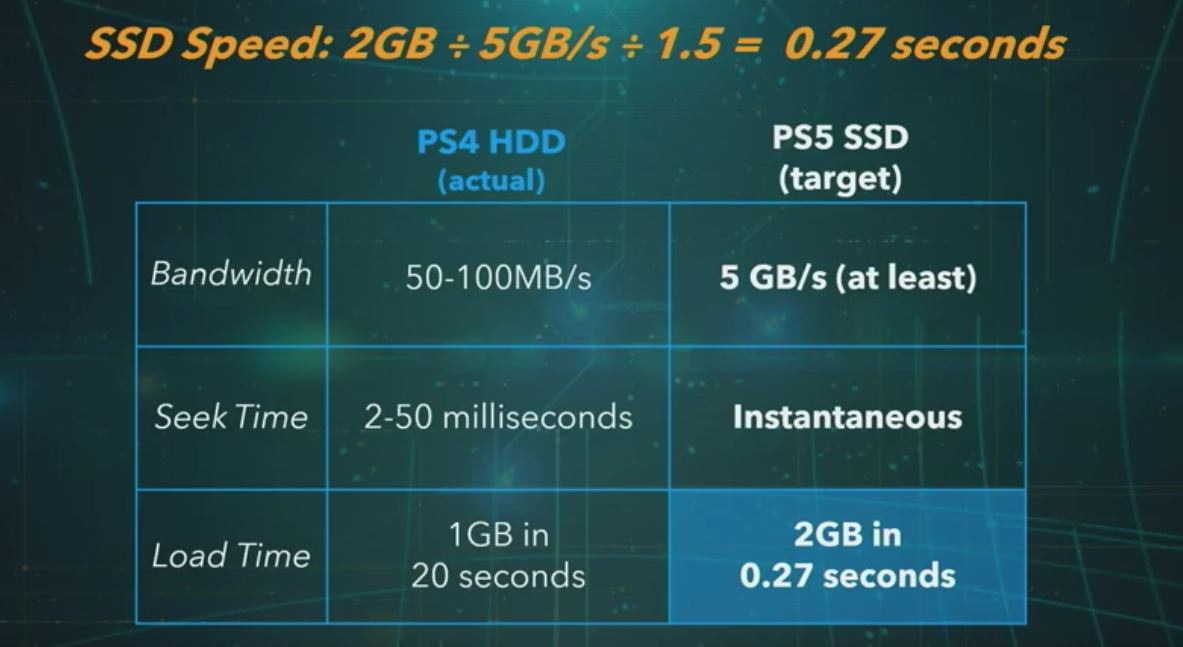 The built-in SSD is a game changer, according to Cerny. All things considered, 1GB takes about 20 seconds to load from a regular hard drive  — a spec that can “sabotage” a developer’s capabilities, according to Sony. Playstation 5 is “targeting” 5.5GB per second. That amounts to basically a quick fade for game loads or re-spawns says Cerny, as well as nearly unnoticeable fast travel speeds, no load screens, ultra fast streaming of game data, and zero patch install times.

Cerny is saying the functionality and the process that depend on the SSD performance are as much as 100 times faster than a PS4. A “Custom Flash Controller” among other customized units is being implemented (a 12-channel interface) to allow the SSD performance to actually play smoothly in-game.

Based on the PlayStation 5 specs, the machine will support certain M2 SSD that can be installed in a bay in PS5 via the custom I/O unit. They will take full advantage of the performance on the built-in SSD, providing it’s as fast as the built-in storage: 5.5GB/s. Sony will release more details on compatible replacement SSD drives at a later date. 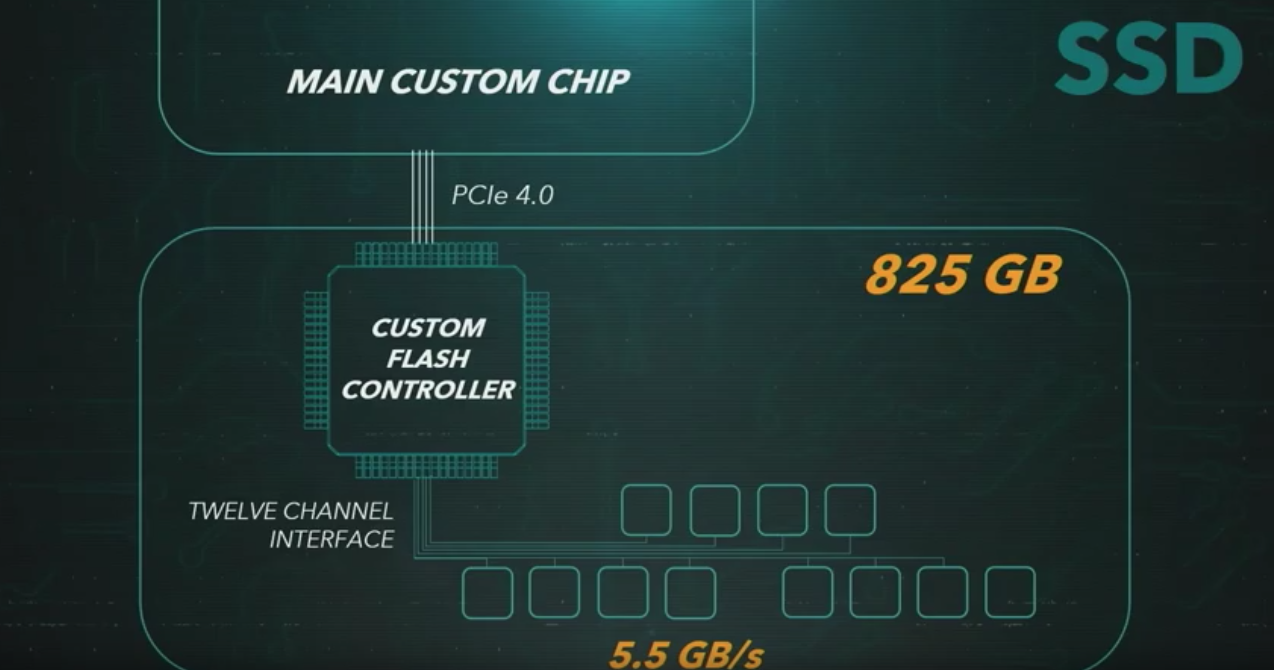 PS5 houses a custom RDNA2 AMD GPU that supports optional primitive shaders (allows the game to synthesize geometry on the fly among other things, a “new capability”) and ray tracing. Among today’s unveiled PlayStation 5 specs, Mark Cerny mentioned a CPU with eight Zen 2 cores and a variable frequency up to 3.5GHz.

A PS5 title is already successfully using ray tracing with only modest costs, but it’s still unclear how useable this feature will be as devs will have the choice to implement it.

According to Cerny the teraflop and CU specs being thrown around are much less telling than one would think. The lead architect and his team prefer 36 CU (62% more transistors than PS4) gear based on actual performance results and the way this decision effects the system’s cooling solution (details on this are coming at a later date).

PS5 will pull extra power from the CPU and push it to the GPU using AMD SmartShift. It sounds like PS5’s GPU is capped at 2.23GHz and amounts to 10.3 teraflops, which, according to Cerny, is an ideal setup based on the cooling system, price to the customer, and other overly technical factors.

PS5 has a custom audio engine,” known as the the “Tempest Engine.” More specifically, this results in a much more 3D audio spectrum that support hundreds of sound sources.

Instead of using a rain sample, plenty of raindrops hitting all around the player with extreme locality are a much better choice — a feature Cerny feels makes a massive difference for gamer immersion. This essentially sounds like it results in much better navigational audio so players can tell exactly where a sound just came from in the game world. But it will vary greatly based on the actual speakers or headphones your using with virtual surround sound being implemented for certain setups.

This will also allow for convolution reverb (realistic environmental audio reflections) and other features developers can directly take advantage of for particular games.

The road to PS5 started way back in April of 2019 when Cerny dropped the initial details on the upcoming console. After that, Sony unveiled the holiday 2020 release date and details on the new DualShock controller before Bloomberg analysts suggested a $470 price range for PS5 due to issues sourcing internals. After Microsoft unveiled a massive amount of details via an in-depth post published earlier this week, Sony didn’t have much of a choice but to put the Cerny center stage and dish out the goods.