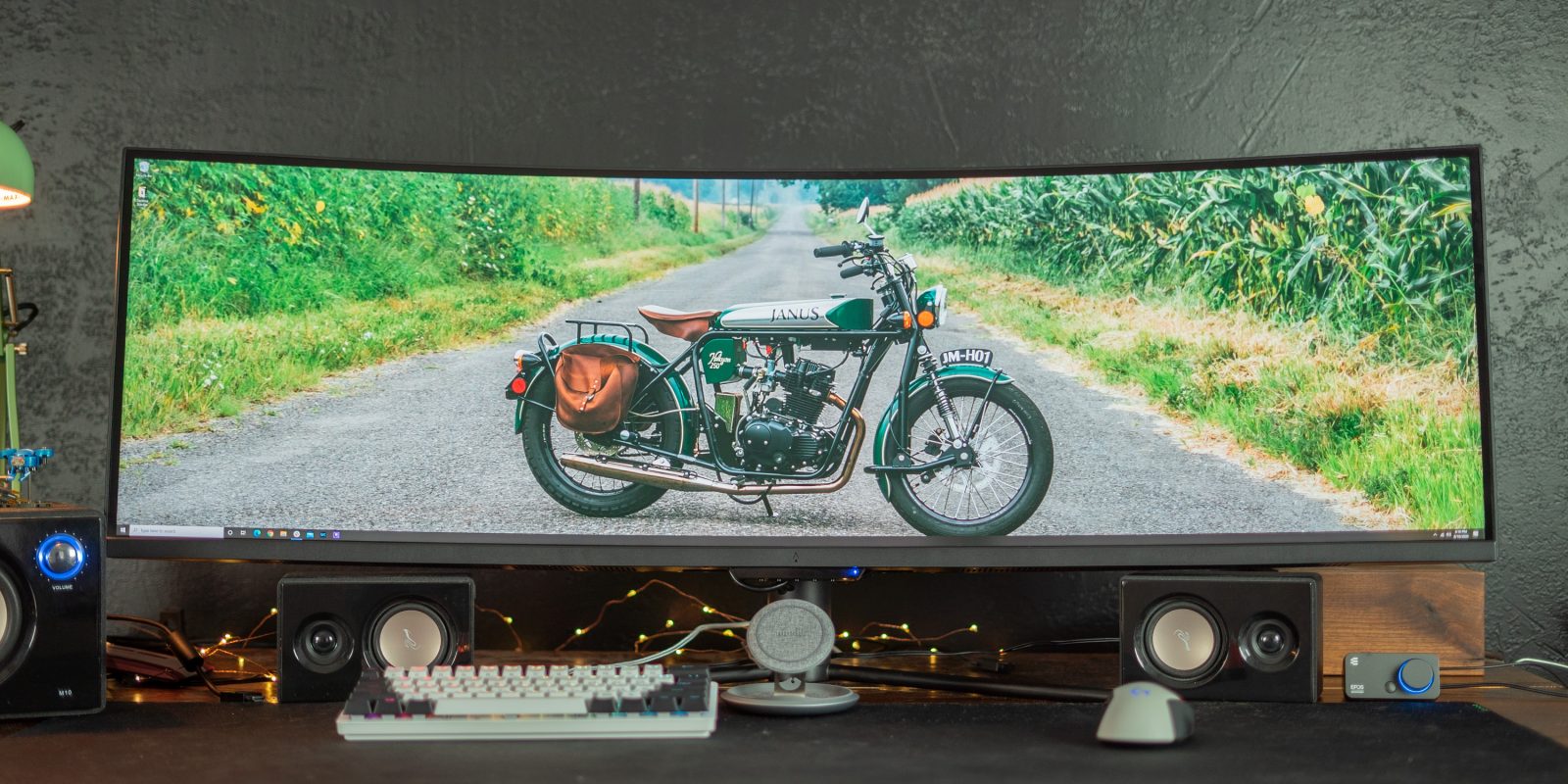 Having multiple monitors set up for gaming and productivity is pretty standard, but you can also bypass two displays by opting for a super ultra-wide screen. The new Monoprice Dark Matter 49-inch monitor features a massive 5120 x 1440 DQHD (dual QHD) along with a host of other specs to make it appeal to gamers and non-gamers alike. Following our announcement coverage, we wanted to check it out in person. Head below to watch the video and see it in action.

At first look, a 49-inch DQHD monitor looks pretty absurd. But it’s essentially two 27-inch screens in one display. By having it spanning one bezel-free monitor, it opens up a world of possibilities for gaming and productivity.

Out of the crate

Maybe they’ve changed how these are shipping, but mine showed up in a massive wooden crate. It wasn’t too heavy to move, but it would have been pretty awkward to take up the stairs if I was doing it by myself. Getting the monitor out of the box and set up was pretty straightforward. You need to screw on the base, and cables can be routed through the stand to clean it up a bit. 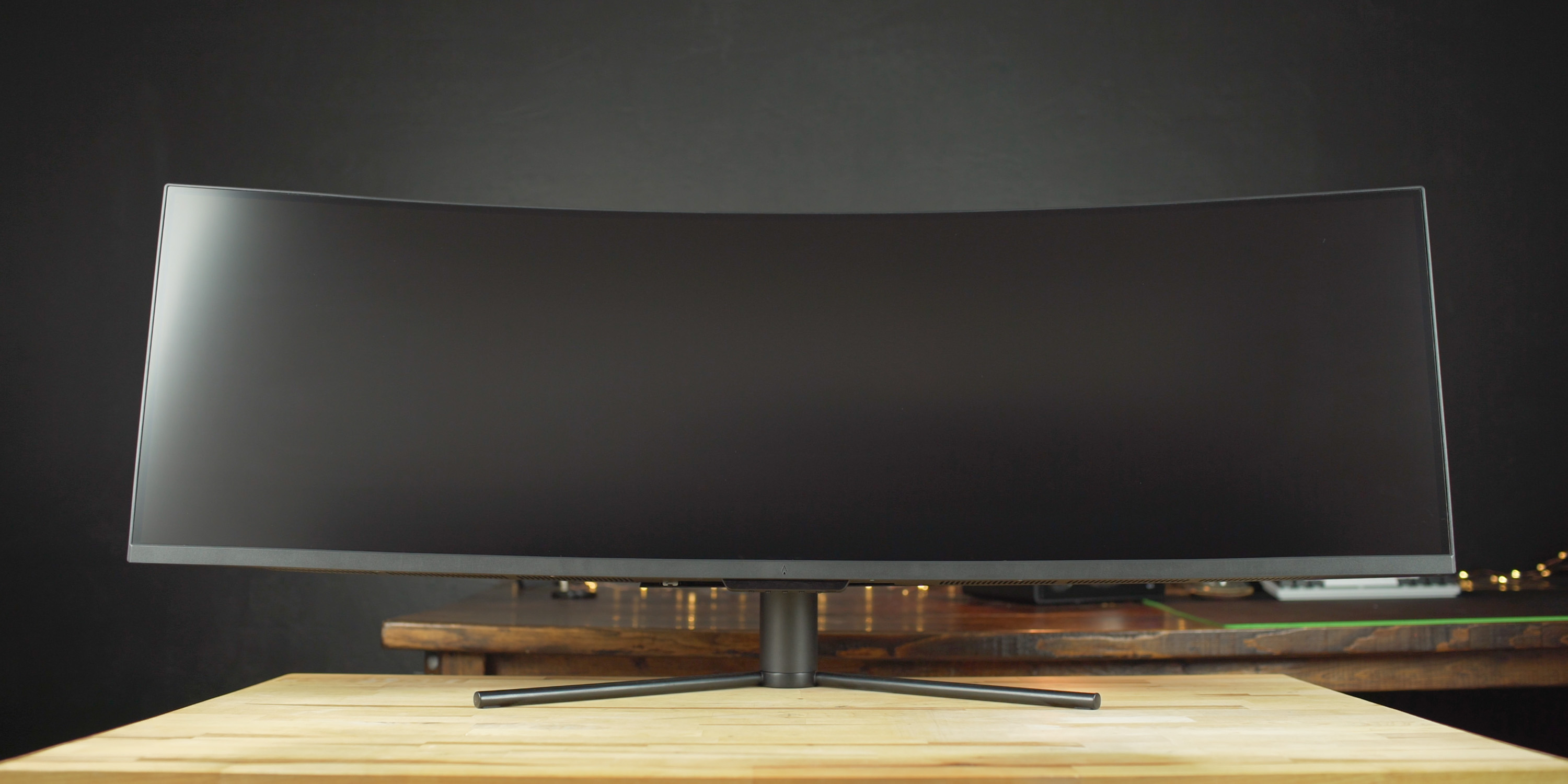 The overall design on the Monoprice Dark Matter 49-inch monitor is pretty simple and clean. There is a thin bezel on the sides and top of the monitor, with a bit of a larger chin on the bottom. Under that chin are five menu buttons that make it easy to navigate.

Supporting the monitor is a wide stand, as you would expect with the overall dimensions of this display. Tilt is the only physical adjustment on the stand, though. No height adjustment here. It can accept a 75 x 75 VESA mount pattern for desk or wall mounting. The spine of the stand has a LED light that shines when the monitor is powered on, but this isn’t really visible unless you’re to the side of or behind the monitor. 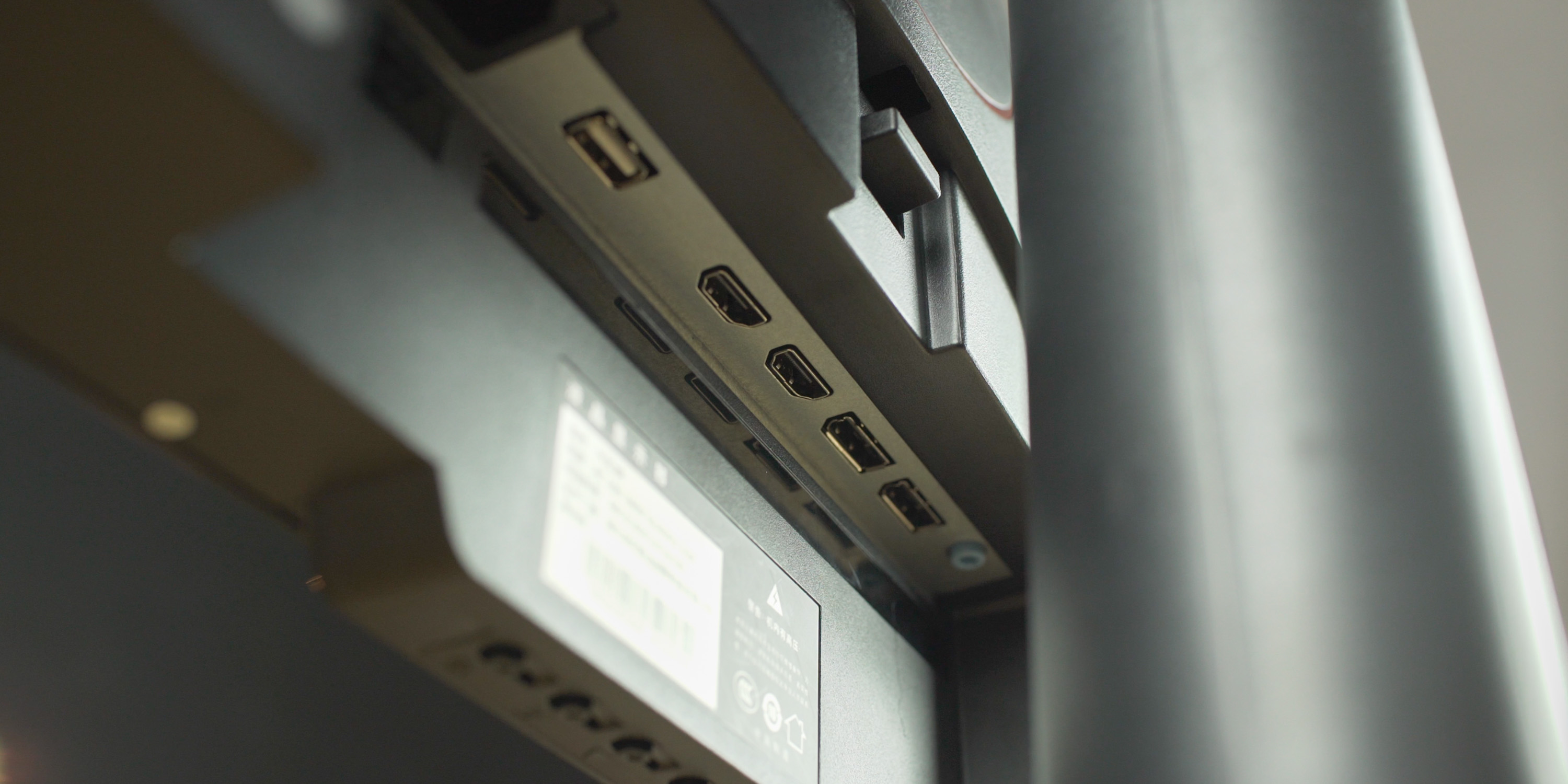 As far as inputs, the Dark Matter 49-inch monitor has two display port 1.4 ports and two HDMI 2.0 ports. For the best performance, Displayport should be used if possible. But the cool thing with those different inputs is that you can split the monitor into essentially two different monitors. So you could have a Mac and PC both taking up the size of a 27-inch 2560 x 1440p display, or a PC and an Xbox One, and so on. 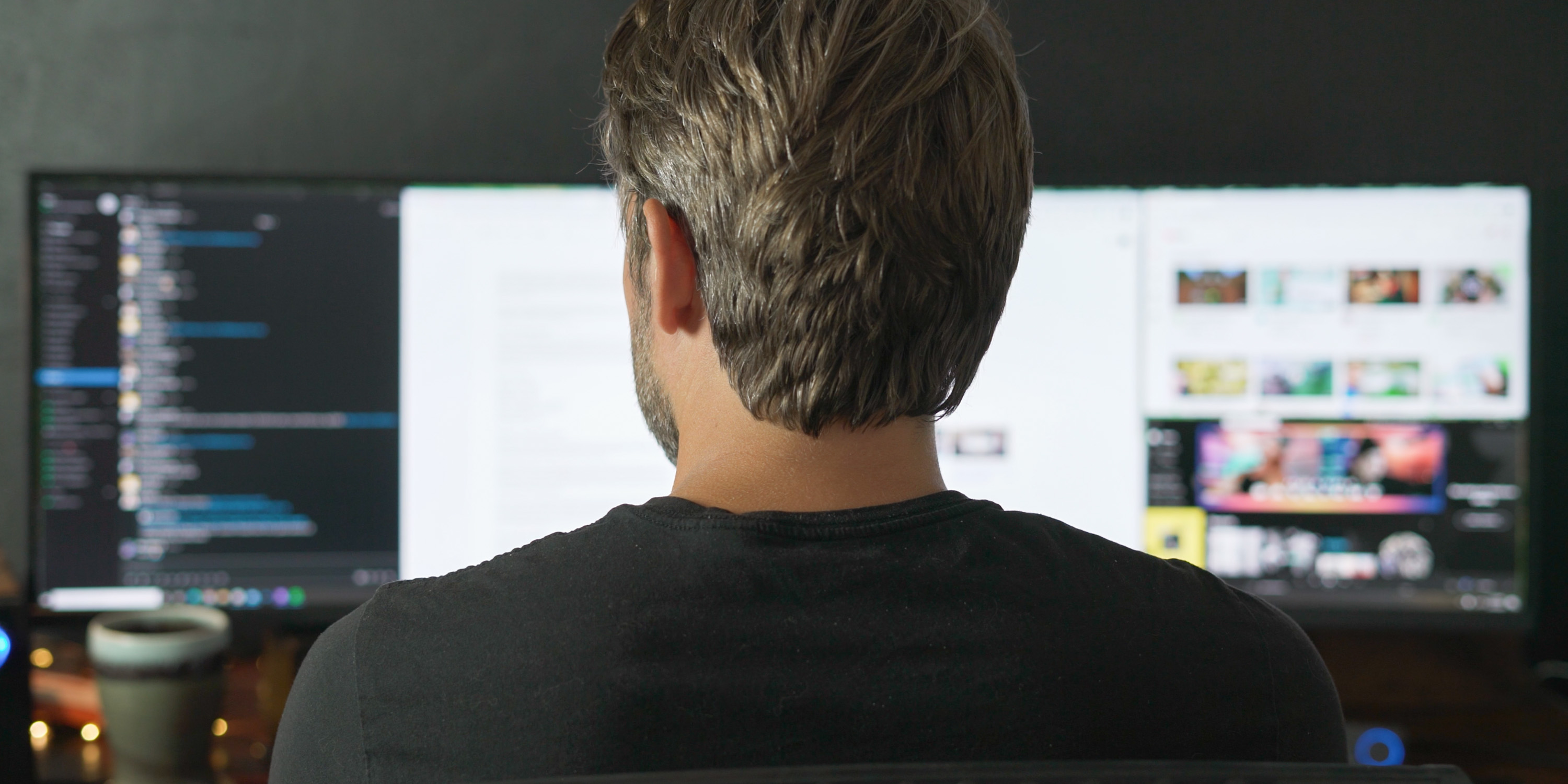 Not just for gaming

Most of my time spent using this monitor is in a productivity standpoint where I have my Slack chat open on one side, two side-by-side browser windows and Spotify, a YouTube page, or anything else over on the right. Having these spread out makes it easy to get information at a quick glance while working. The 1440p resolution is also great for productivity.

Out of the box the colors seemed off, so taking some time to calibrate the screen is a good idea if you are using it for anything where the image is critical. I have an old Spyder Co calibrator that I used and it quickly made a profile for the Dark Matter 49-inch monitor. 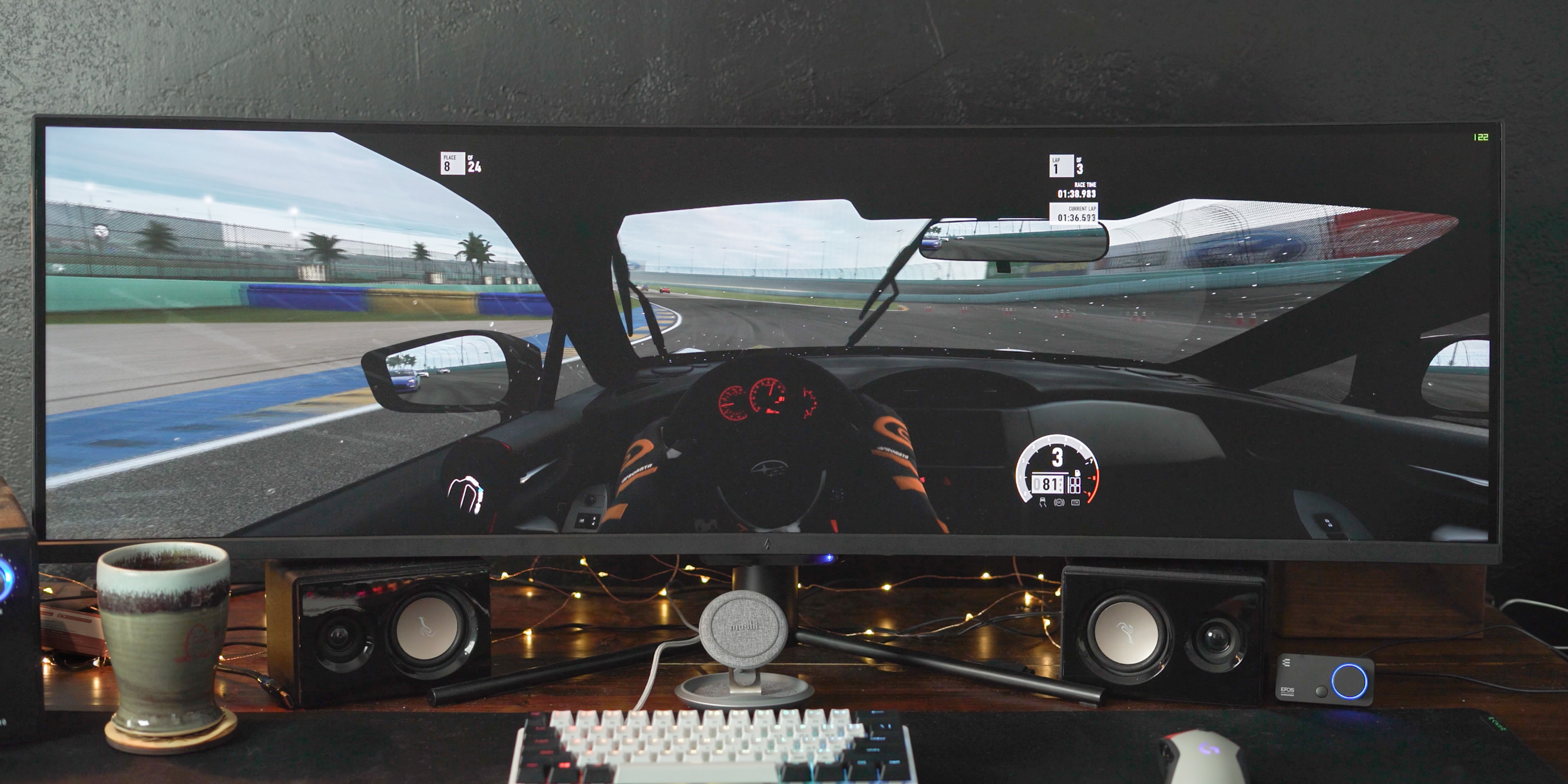 Gaming is a new experience

At its core, the Dark Matter 49 is positioned as a gaming monitor. In my experience, it’s great for some games and too much for other games. While playing FPS games like Call of Duty: Warzone or Escape from Tarkov, I typically put the resolution down to a more normal 2560 x 1440. At full resolution, I had to move my head to see the minimap or other HUD items, which wasn’t ideal for my gaming experience.

But, when playing Forza 7, it really is an amazing experience to have the resolution set all the way to the maximum 5120 x 1440. The immersion and worlds that they’ve created looked incredible. I’m also excited about trying out the upcoming Microsoft Flight Simulator on this monitor. 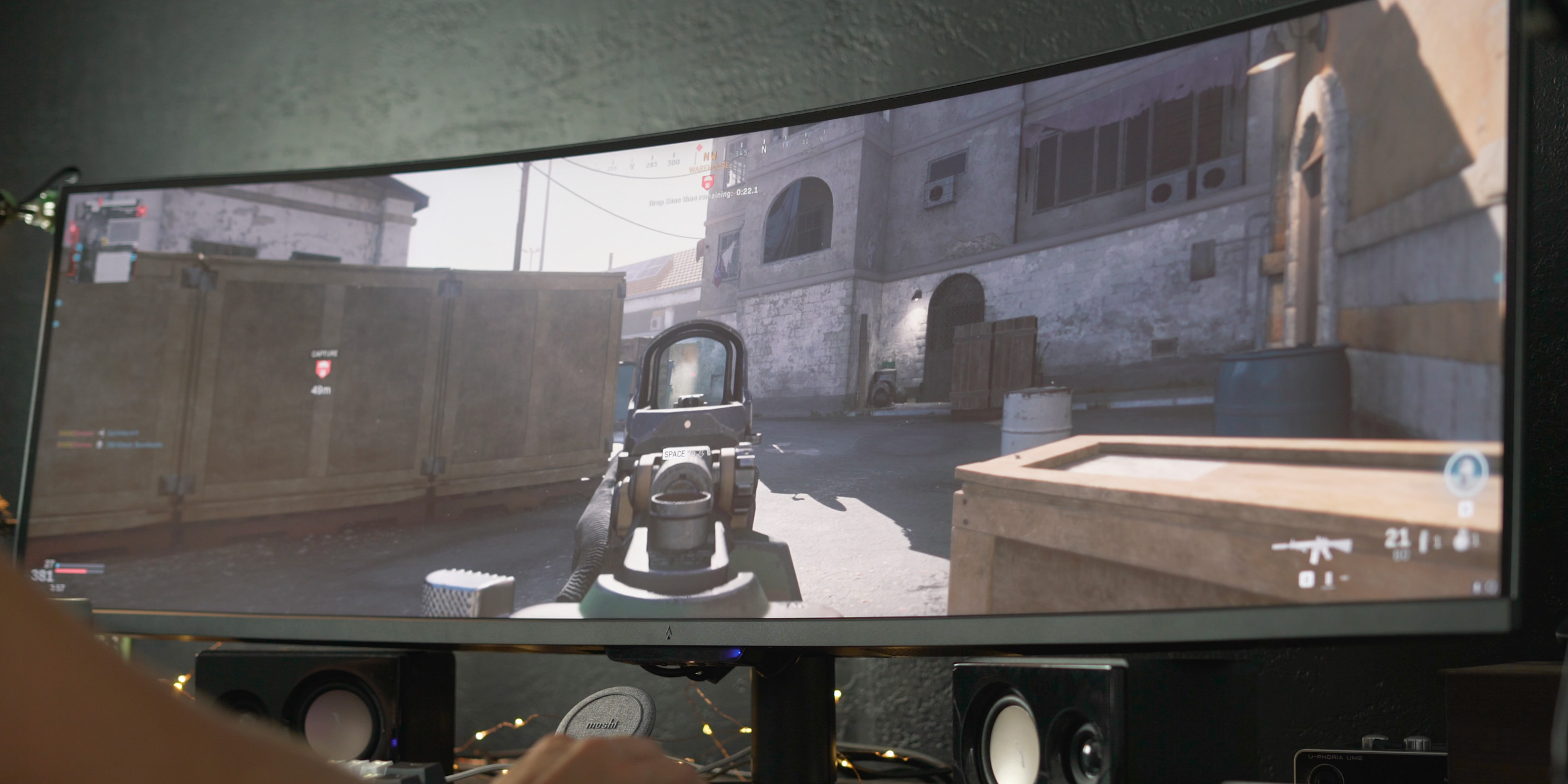 If you are a hyper-competitive gamer, though, you’ll probably want to look elsewhere. For that price, you can get monitors that are better suited for the maximum frame and refresh rates and that minimize input delay and ghosting.

One that has been generating a lot of interest lately has been Eve with their Spectrum monitors. Though they’re not yet available, I’m hoping to be able to do a review on one of those at some point. 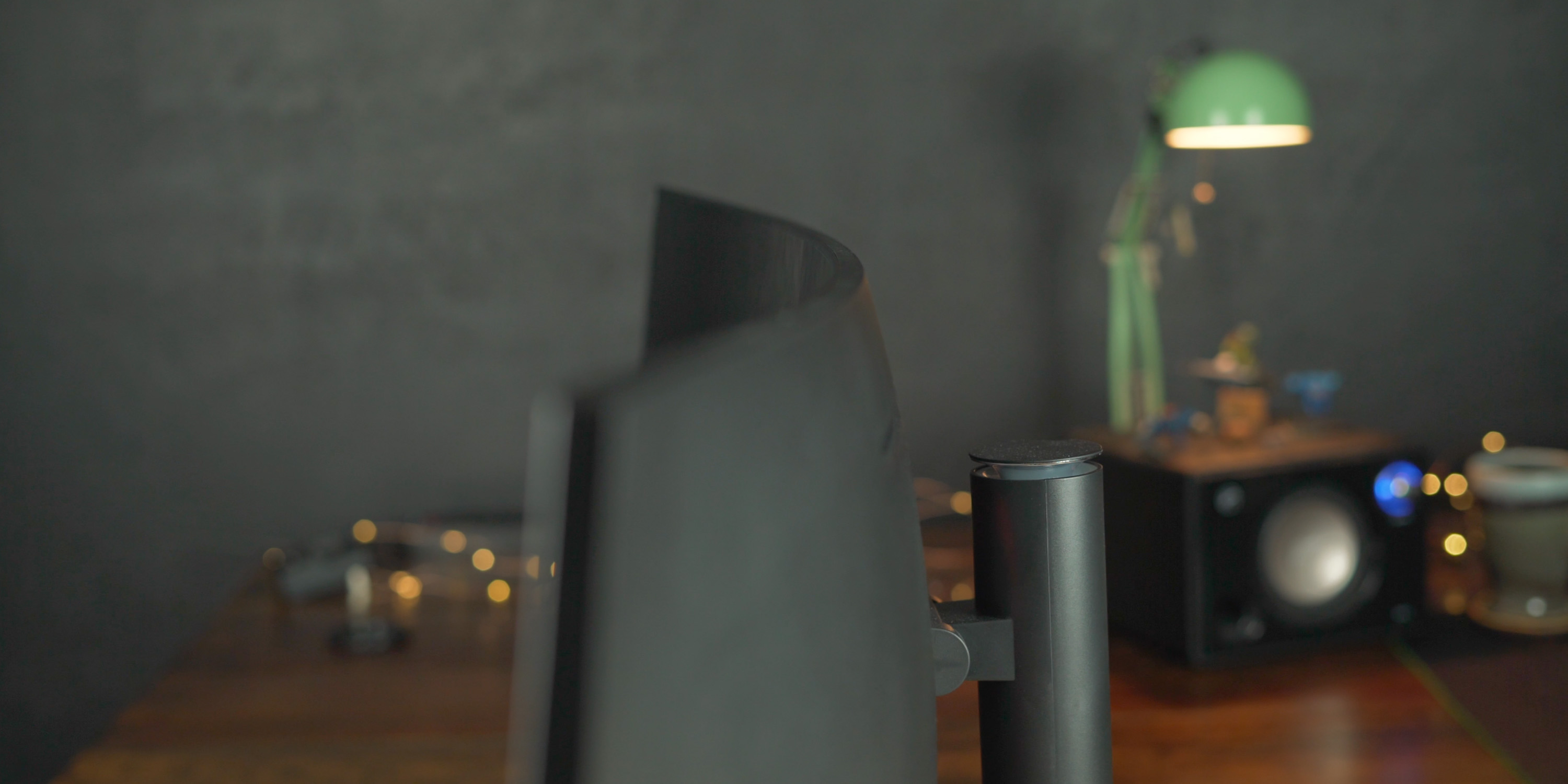