iHome’s SoundFlask is the naughty-looking Bluetooth speaker that plays nice with phones, tablets + computers, now 20% off 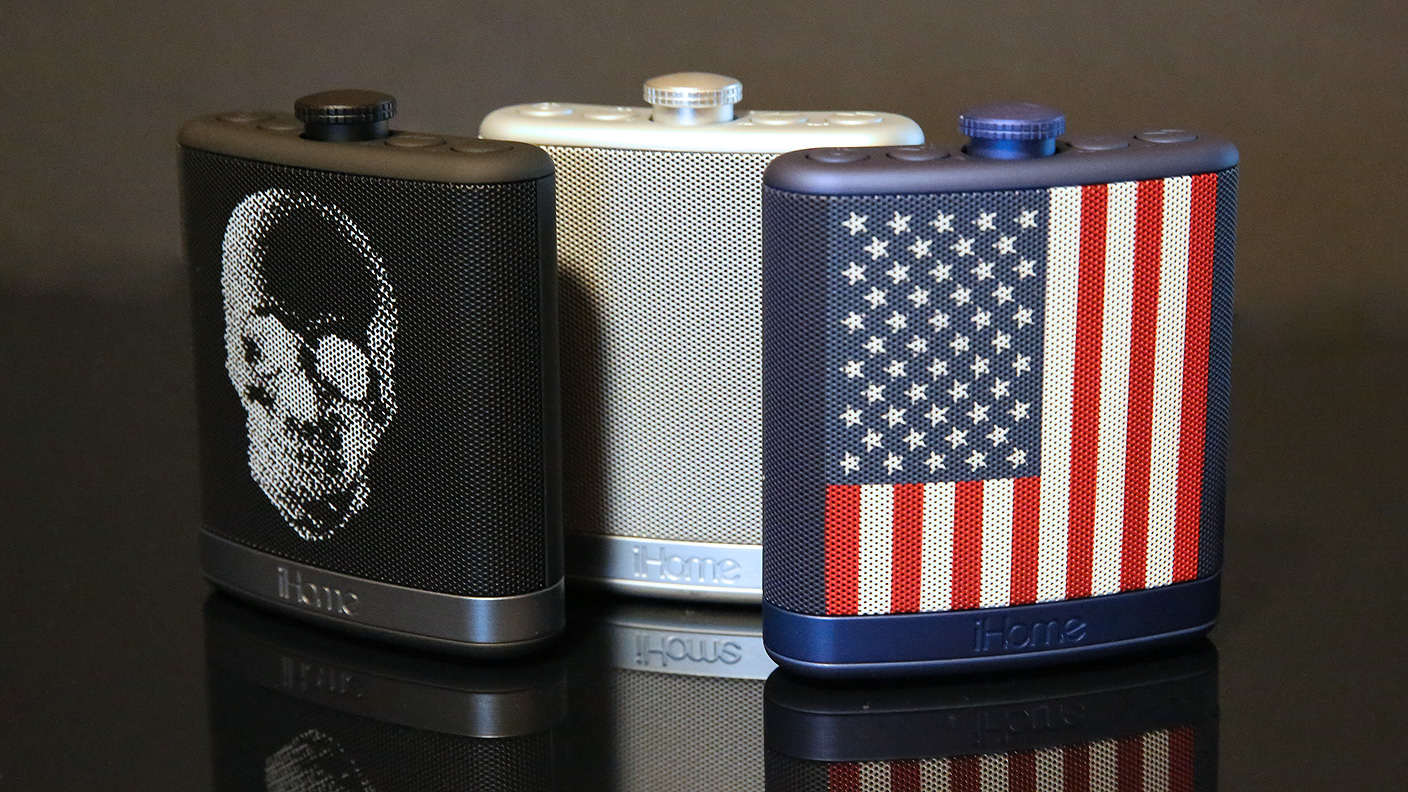 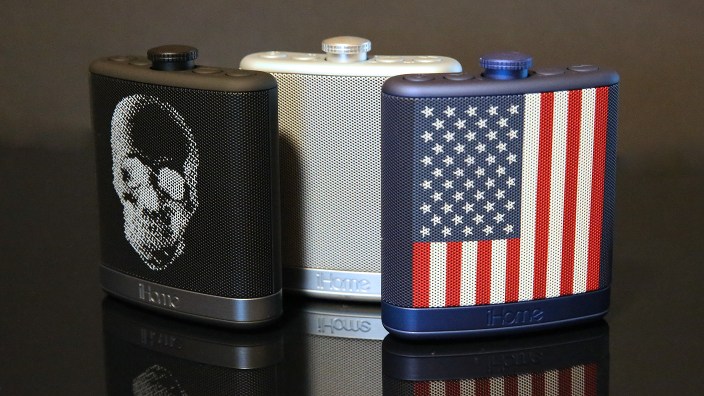 Flasks have always been cool. They’re symbols of mischief, designed solely to carry and conceal mysterious drinks — the only beverage container that whispers “adults only” before quietly disappearing back in your pocket. That’s why iHome’s new SoundFlask is such an ingenious idea for a powerful, pocket-sized speaker system. It looks naughty, but plays nice with any Bluetooth audio device you may have — iOS, Apple Watch, Android, or computer.

Equipped with two speakers, a microphone, and a rechargeable battery, SoundFlask is built to deliver much louder sound than whichever device you’ve paired with it. If you don’t want to sneak it into a pocket, you can wear it with an included case. Think it’s the ideal speaker for you, or a great gift for someone you know? Below, we’ll show off the SoundFlask, and give you a great deal if you order one right now… 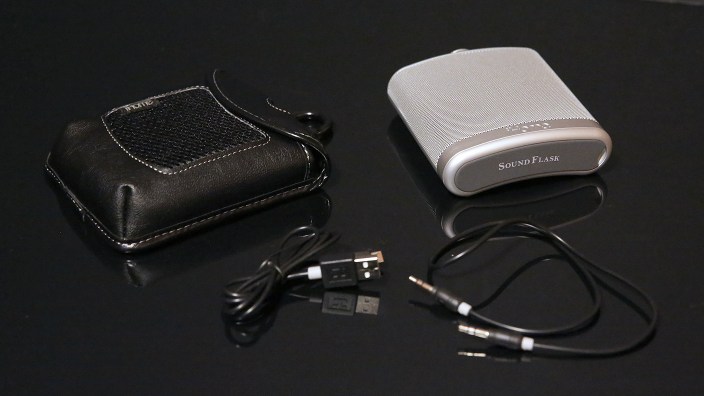 Each palm-sized SoundFlask is finished with soft touch metallic paint, and rubber padded on two sides: four tiny feet on the back keep it from scuffing on a table, and the bottom is capped with a rubber port cover. You can choose from silver (“Kennedy”), American flag blue (“George”), or ghostly skull black (“Alexander”) versions, each bundled with the same carrying case, a 3.5mm audio cable, and a micro-USB recharging cable. SoundFlask can run for up to 8 hours between charges, easily recharging via USB. 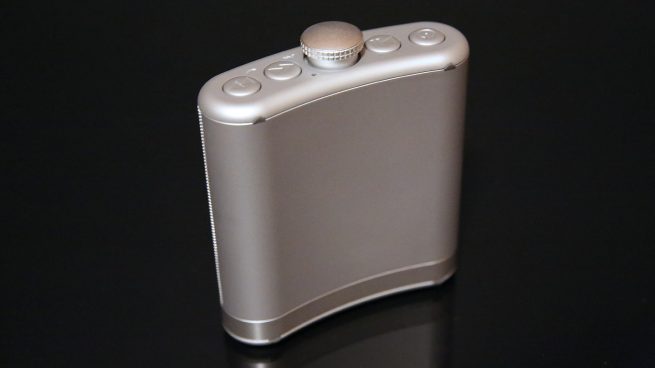 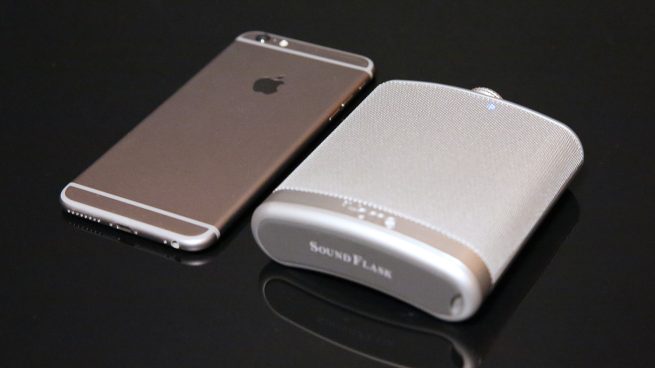 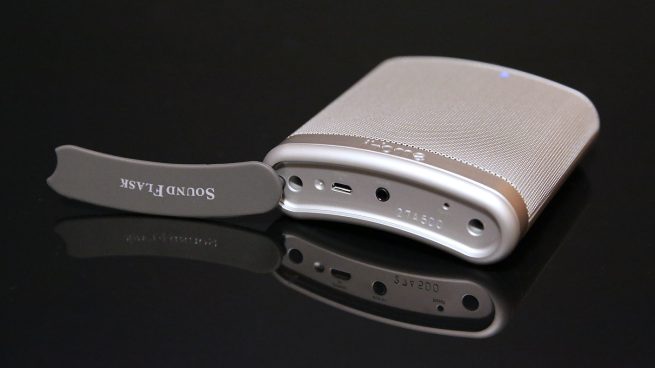 SoundFlask is comparable in overall volume to an iPhone 6 Plus, but curved to match the contours of your leg or jacket pocket. Shorter than the iPhone but wider and thicker, it’s a Bluetooth speaker first and foremost, able to play louder and richer than the integrated speakers on any smartphone or tablet. If you appreciate when music doesn’t sound tinny, or strain to hear your iPhone during outdoor calls, SoundFlask will deliver the added power you need. The built-in microphone for speakerphone calls works great, too. 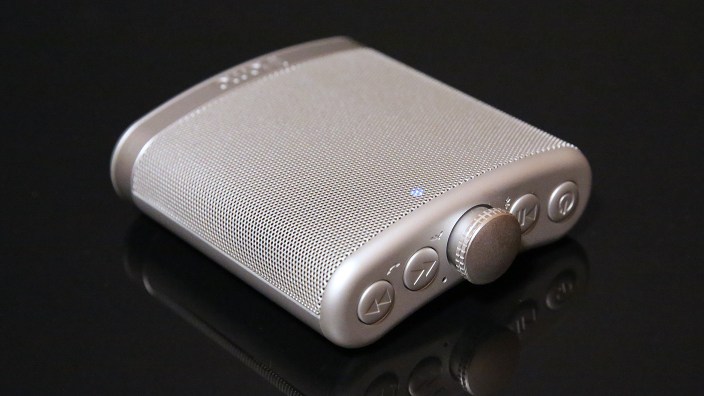 One of SoundFlask’s best touches is the design of the controls. The traditional flask’s classic twist-off top has been turned into a ratcheting volume knob with great-feeling rotation action, and each of the buttons makes a reassuringly solid plunk when pressed. Everything’s easy to use, and iHome’s choice to separate the volume knob from the power button prevents SoundFlask from accidentally turning on when it’s tossed in a bag. 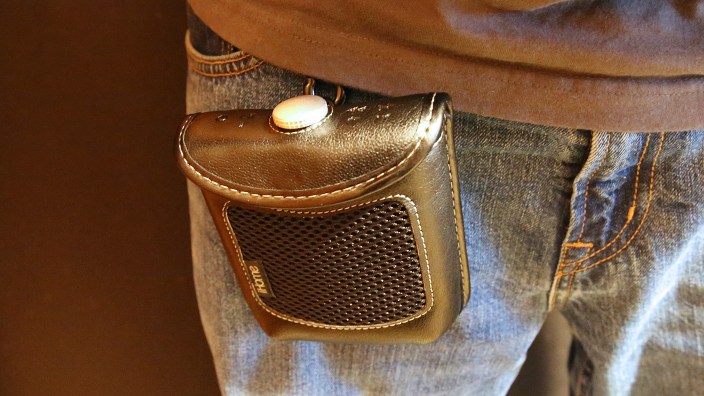 SoundFlask’s carrying case is something special. Magnetically sealed and made from a really convincing synthetic leather, it has a mesh vent on the front for SoundFlask’s speaker, access points on the top for the four buttons and top knob, and a carabiner hook on the back. It’s super easy to attach to a belt loop, and in a comfortable position for easy use of the controls.

Get Your SoundFlask Directly From iHome Now

For a limited time, the silver and black SoundFlasks are available from iHome’s web site with a great discount: 20% off the normal $50 price, using code 9to5mac at checkout! The ghostly skull black version is available through iHome’s site, while Amazon is offering a black version without the skull and the blue American flag Flask. Each version includes the cool carrying case shown above. 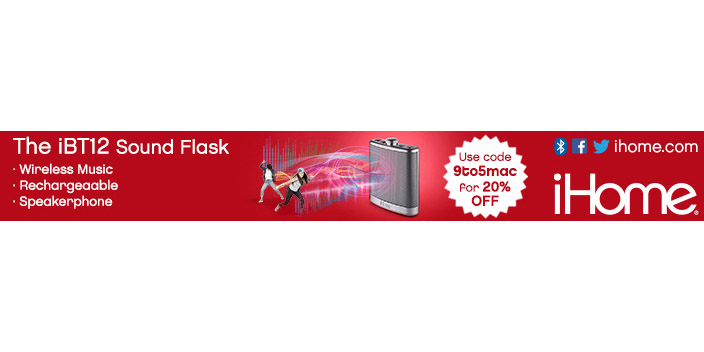 iHome is also offering a special deal on new Kineta speakers, which combine a 2,600mAh K-CELL battery with your choice of a portable speaker or alarm clock radio. Read all about Kineta K1 + K2 and get the great deal here!

This post has been sponsored by iHome, maker of Kineta, SoundFlask, and other great audio accessories for Apple and Android devices.