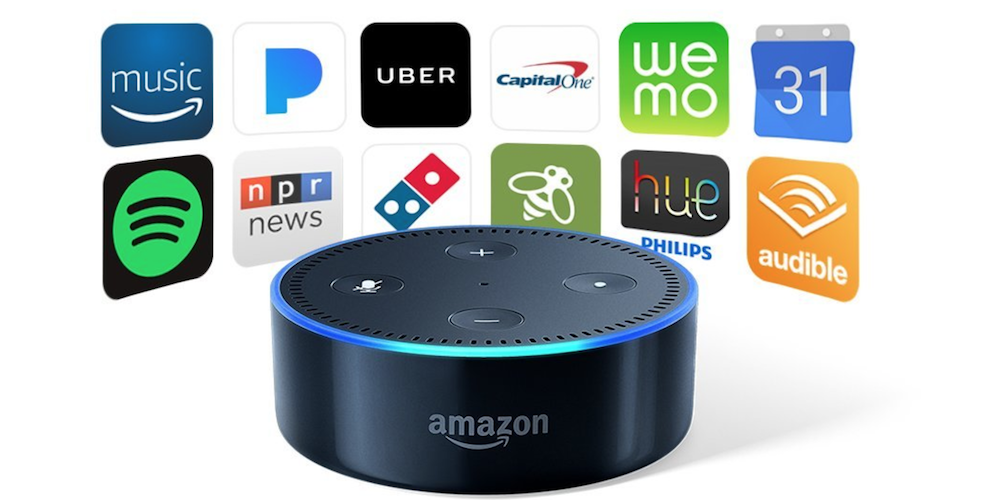 This year, our favorite gadget pick was a no-brainer. The currently $39.99 Echo Dot took an already revolutionary Echo speaker, released in 2014 for $199 and made it so much better and accessible for everyone, in every room.

Knowing how much this changes people’s lives for $40 makes this the no-brainer Christmas technology item.

The original Echo was pretty cool but had its quirks. Alexa, the speech recognition behind it was still learning. The ecosystem was non-existent and frankly the speaker wasn’t – and still isn’t – fantastic, especially for its $199 price tag (currently $139 but ships after Christmas).

But Amazon kept plugging away at its Alexa speech recognition/responses and with its retail might and influence was able to sign up partners from all over the smart home ecosystem and internet services. Example of how hardcore they’ve been: Even Alphabet’s Nest works well with the Echo Speaker and my Google domains calendar works with Echo but not with Google’s own $129 challenger the Google Home(!!).

In, fact, Google’s Home attempt and its mediocre debut, still in its early stages, proved to me how well Amazon had done over the past 2 years with feedback and differentiation, while Apple and Google let the smart speaker business pass it by. Next year might be different with Google Home learning a lot more tricks and Apple releasing a ‘Siri Home’ type of product, but it is clear, 2016 is Amazon’s Echo Dot’s year.

Incidentally, I think Google and Apple thought that having a smartphone on you at all times would obviate the need for a smart speaker – and initially I thought this as well – and that’s why they are late to the game. But truly being hands free has changed my thinking entirely.

Let’s drill down the hardware and software and see why this is our best product for 2016:

The Echo dot is a quarter of the height of the original Echo but still retains all of the smarts of the original. While the cool volume dial was replaced with buttons (we almost always just speak the volume change) it retains the most important bit, the far field mics which work scarily well. For a lark, I’ve tried to speak to it from a different room, 30 feet away at barely audible volume and it friggin hears me and responds.

It also has a passable speaker for communicating though. Responses, podcasts and news are fine with the built in speaker which I’d put at the equivalent of a $30 Amazon speaker but you’ll definitely want to hook it up to an external speaker for room filling music. Conveniently Amazon initially bundled the Dot with some amazing speakers like my favorite Bose Soundlink Mini. But frankly any Bluetooth or AUX enabled speaker will do.

When I said above that the Echo Dot was a better option than the original Echo hardware-wise, it is because it uses less power and is is powered via MicroUSB rather than a proprietary AC plug (the speaker is obviously not as good). This allows you to put the Echo Dot anywhere. The one in our bedroom is powered by the USB Alarm clock it sits on and uses for speakers. But we’ve even taken it with us in the car (with a Mifi) and it can even be powered easily with a USB Battery (there’s even an overpriced battery case for it) or any 2A USB adapter. We’ve now got them in the bathroom (for showers, gross!), garage, and the kids’ room – pretty much anywhere there is power and wifi.

The original Echo software experience was neat but real world uses were pretty limited. You could get the weather, order limited items from Amazon, and ask a limited number of questions and expect a coherent answer. This was great for techies and early adopters but over the past 2 years, the ecosystem has exploded with new tricks. In fact, every Friday afternoon, Echo owners get an email with new features. I’m still excited every time that comes in to try out the new tricks.

Just a few of the 3rd party tricks I’ve started to use recently:

Our morning conversation, before I even open my eyes in the morning is:

The price is really the game changer. The $200 Echo was a major investment for a technology in its infancy. Google’s Home is $129 (though it does have the best speaker of the bunch). Even when Google Home dipped below $100 for Black Friday, it was still two and a half times as expensive as the Dot.

At $49.99, this was a no brainer for 9to5Toys readers and you guys loved it. But Amazon’s been knocking it down to $39.99 for most of the holiday shopping period which of course makes it a “multiple buy no brainer” and accessible to almost anyone. I’ve personally bought around 10(!!), for my kids room, the garage, bathroom and many of them as gifts for everyone I know who has an Amazon Prime account (which is almost anyone). Knowing how much this changes people’s lives for $40 makes this the no-brainer Christmas technology item. If you are thinking the same thing, jump in quick because shipping before Christmas/pricing is almost over.

Get this deal
$10 off $40
You’re reading 9to5Toys — experts digging up all the latest technology and lifestyle deals, day after day. Be sure to check out our homepage for all the latest news, and follow 9to5Toys on Twitter, Facebook, and LinkedIn to stay in the loop. Don’t know where to start? Check out the best Apple deals, our daily podcast, and subscribe to our YouTube channel