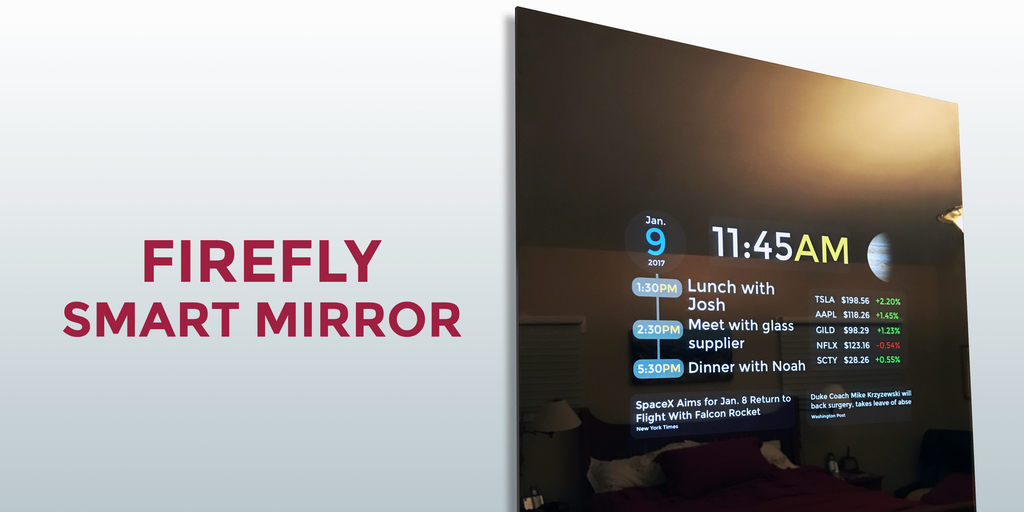 At this point, it seems like everyone is working on their own variation of smart mirrors. From DIY setups, to even major companies. Getting started with your own isn’t terribly difficult, but a new project on Kickstarter hopes to make use of those old tablets you have lying around. Firefly, yet another smart mirror, has launched on the crowdfunding site with one major difference: it relies on an iOS or Android tablet to power it.

The Firefly smart mirror allows users to start their day right where many already do, in front of a mirror. With IFTTT integration and custom built widgets, users of Firefly can customize what they see one the display in a variety of ways. One of the most interesting aspects of the mirror is that it doesn’t rely on a big, bulky monitor setup that so many other DIY setups do.

Firefly was built to have the flexibility to use both iOS and Android tablets in a variety of sizes. In the Kickstarter, the team showed them testing with both the iPad mini and iPad Pro. Got an old tablet lying around? Download the custom app, stick the tablet in the Firefly and you now have your very own smart mirror. Obviously the first thing you lose with a tablet stuck behind a mirror is the ability for touchscreen control, and that’s where Firefly’s voice integration comes into play.

Using gestures and voice recognition powered by Amazon Alexa, Firefly is a hands-free control system. Not only can you speak to your tablet now behind the mirror, it will also talk back to you using Amazon’s Polly service. Simply call out a command, and the Firefly responds back with a live visual right in front of you. Some of the examples given in the Kickstarter include:

The Firefly tablet powered smart mirror is on Kickstarter now with a funding goal of $35,000 and 23 days left to go. Backing the project now means you have an opportunity at getting the mirror for just $150.

Disclaimer: As with all crowdfunding sites, we have no guarantees of the products or companies herein.