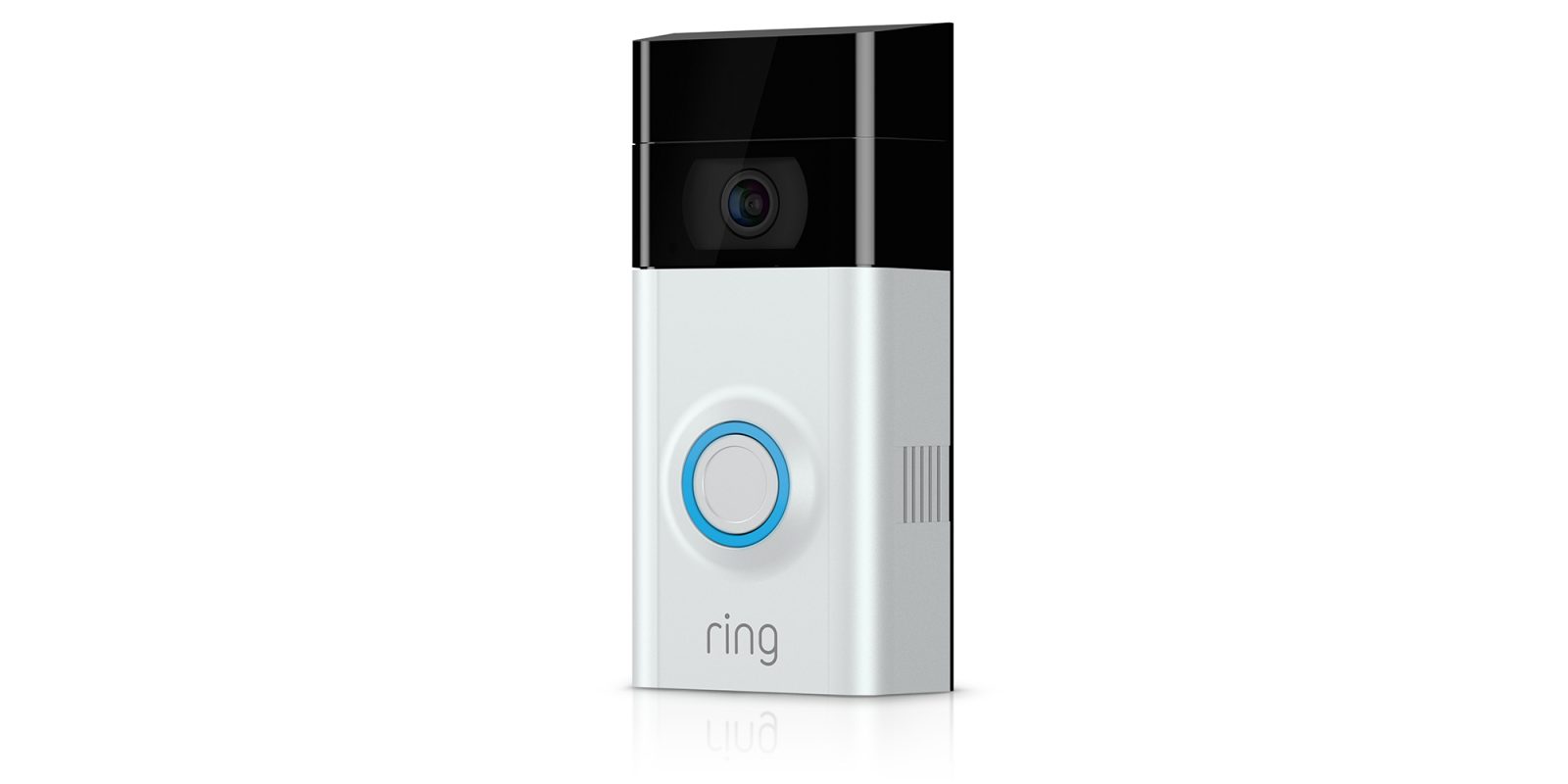 This morning, Ring unveiled the second generation of its popular Video Doorbell system with a handful of upgrades over the original model. Full 1080p HD video highlights the list of features detailed this morning alongside smartphone connectivity and more…

The big news about Ring’s latest Video Doorbell is the upgrade from 720p to 1080p, which will hopefully help with detecting faces on the built-in 160-degree wide-angle camera when someone approaches the door. Improved night vision and interchangeable face plates round out the list of upgrades from the first generation.

There’s a built-in rechargeable battery pack that can be powered up via microUSB port and is removable. This is an upgrade over the original version, which could be difficult to keep charged as the entire unit needed to be removed. Ring isn’t providing much in the way of data on battery life, which likely varies quite a bit based on usage. If that’s a concern, you can also hardwire it with a 8-24 VAC line, which is commonly used for most doorbells. Wireless connectivity remains largely the same with “bank-level” encryption over a 2.4GHz 802.11n connection.

Ring Video Doorbell 2 is still built around your smartphone. Both iOS and Android apps will provide the aforementioned 1080p with the ability to speak directly to your visitors thanks to a built-in microphone and speaker system. Previously, higher resolution footage was only available on the Pro model, that costs $50 more. Mobile push notifications will also provide alerts when someone approaches the door without ringing the bell.

You also won’t be finding any HomeKit-support, either. At least not at launch. Hopefully this is something that will be coming down the line with a future software update.

The new Ring Video Doorbell 2 is available for purchase today with a list price of $200. That’s the same MSRP as the original version, which is always nice to see. Today’s news makes the Pro model largely inconsequential, unless you’re after a slimmer design.

SANTA MONICA, Calif.–(BUSINESS WIRE)–Ring, the leader in outdoor home security, today announced the 2nd generation of its Ring Video Doorbell, the most popular video doorbell on the market. The new device features 1080p HD video recording, a removable, rechargeable battery, improved night vision, interchangeable faceplates and a familiar, sleek design. Like its predecessor, the second generation doorbell also features two-way audio and motion detection and can connect to existing wired doorbells. With the new Ring Video Doorbell 2, Ring has yet again innovated and expanded its ‘Ring of Security’ to offer affordable security solutions for every home and further reduce neighborhood crime.

“Over 1 million users, who we call ‘Ring Neighbors’, trust our innovative and industry-first security products to reduce neighborhood crime in a meaningful way,” said Jamie Siminoff, founder and chief inventor of Ring. “With Ring, homeowners have stopped burglars and package thieves, kept an eye on their property when they’re not home, and communicated with family members and visitors at their doorstep. Continuously inventing is core to the execution of our mission ‘to reduce crime in neighborhoods’ and today’s launch of the second generation Ring Video Doorbell is evidence of that.”

The effectiveness of Ring’s security devices is getting noticed. As one Florida police officer said: “Law enforcement is relying more and more on video evidence to help increase our rate of closure on theft and burglary offenses. The Ring Video Doorbell is a simple but effective tool in this endeavor, providing us with hard evidence and the homeowner with solid peace of mind.” The Ring Video Doorbell 2 ($199) is available today in the more than 15,000 U.S. retail locations Ring devices are sold in, including Best Buy and Home Depot, as well as at ring.com.

Ring’s mission is to reduce crime in neighborhoods and empower consumers by creating a Ring of Security around homes and communities with its suite of affordable, DIY smart home security products. These devices enable users to monitor and protect every corner of their property from anywhere. The “neighborhood watch for the digital age,” Ring devices continue to prevent burglaries and keep homes around the world safe. For more information, visit www.ring.com. With Ring, you’re always home.