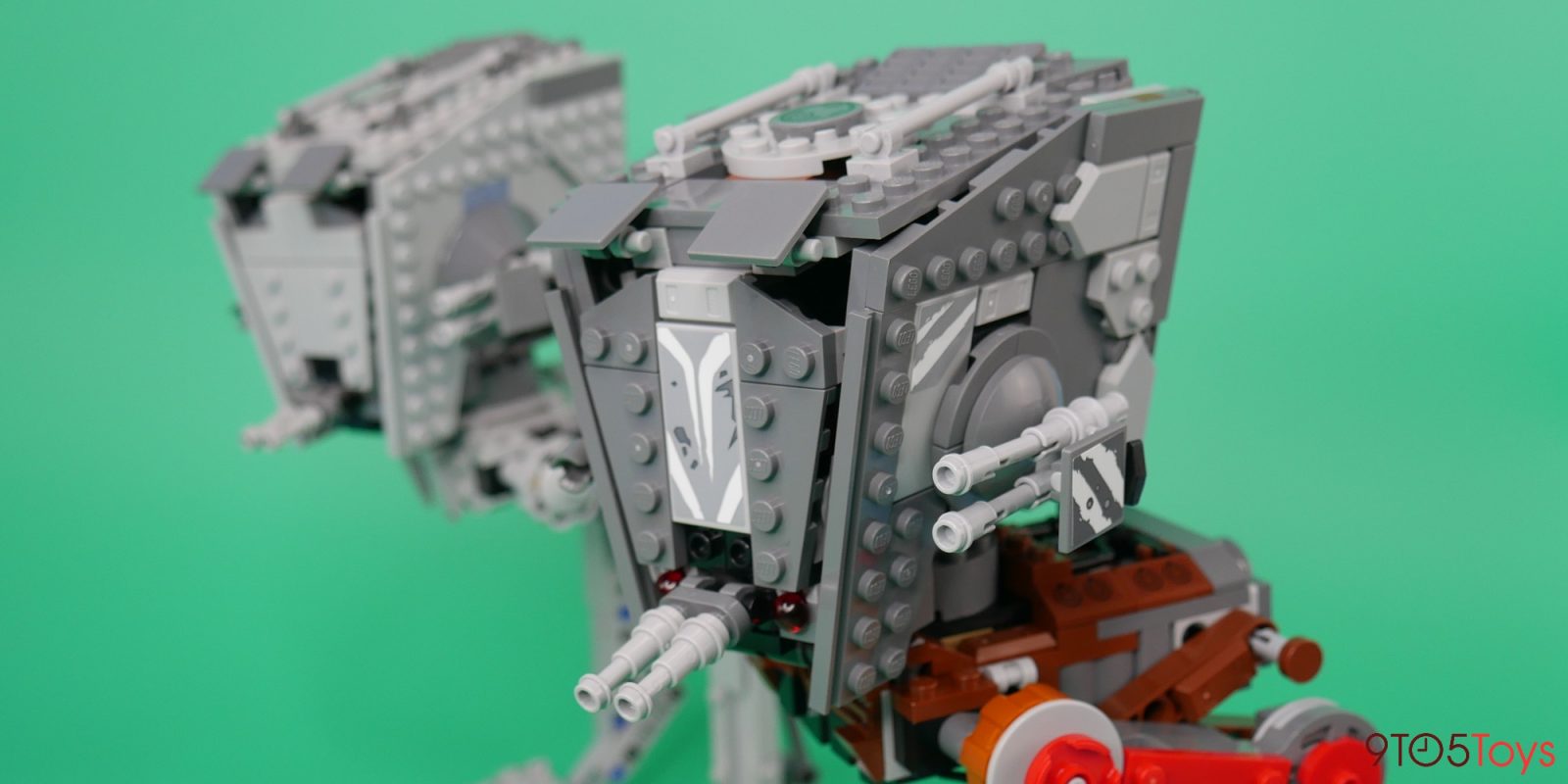 AT-STs are one of the many vehicles that have become staples of the LEGO Star Wars universe. And with The Mandalorian finally debuting on Disney+, it gave set designers the chance to bring the scout transport to a galaxy far, far away following the Empire’s fall in Return of the Jedi. Today we’ll be taking a hands-on look at the new 540-piece kit, which includes four new minifigures and more. Head below for a closer look at the new LEGO AT-ST Raider and all of the details on this kit in our review.

A classic OT vehicle receives a fresh coat of paint

Right off the bat, you’ll notice that this implementation of brick-built Imperial chicken walker stands out from just about every version that’s preceded it. This has a fresh coat of paint to thank for its eye-catching looks, which mixes up the historically utilitarian design. In place of the dull grey exterior that Star Wars fans have come to know over the years, LEGO has covered the AT-ST Raider in stylings representing years of wear and tear.

Swapping out many of the traditionally monochrome bricks, LEGO has included a unique selection of colored pieces this time around. You’ll find a smattering of everything from darker greys to red and brown bricks, which yield an overall look quite fitting for the world of The Mandalorian series. 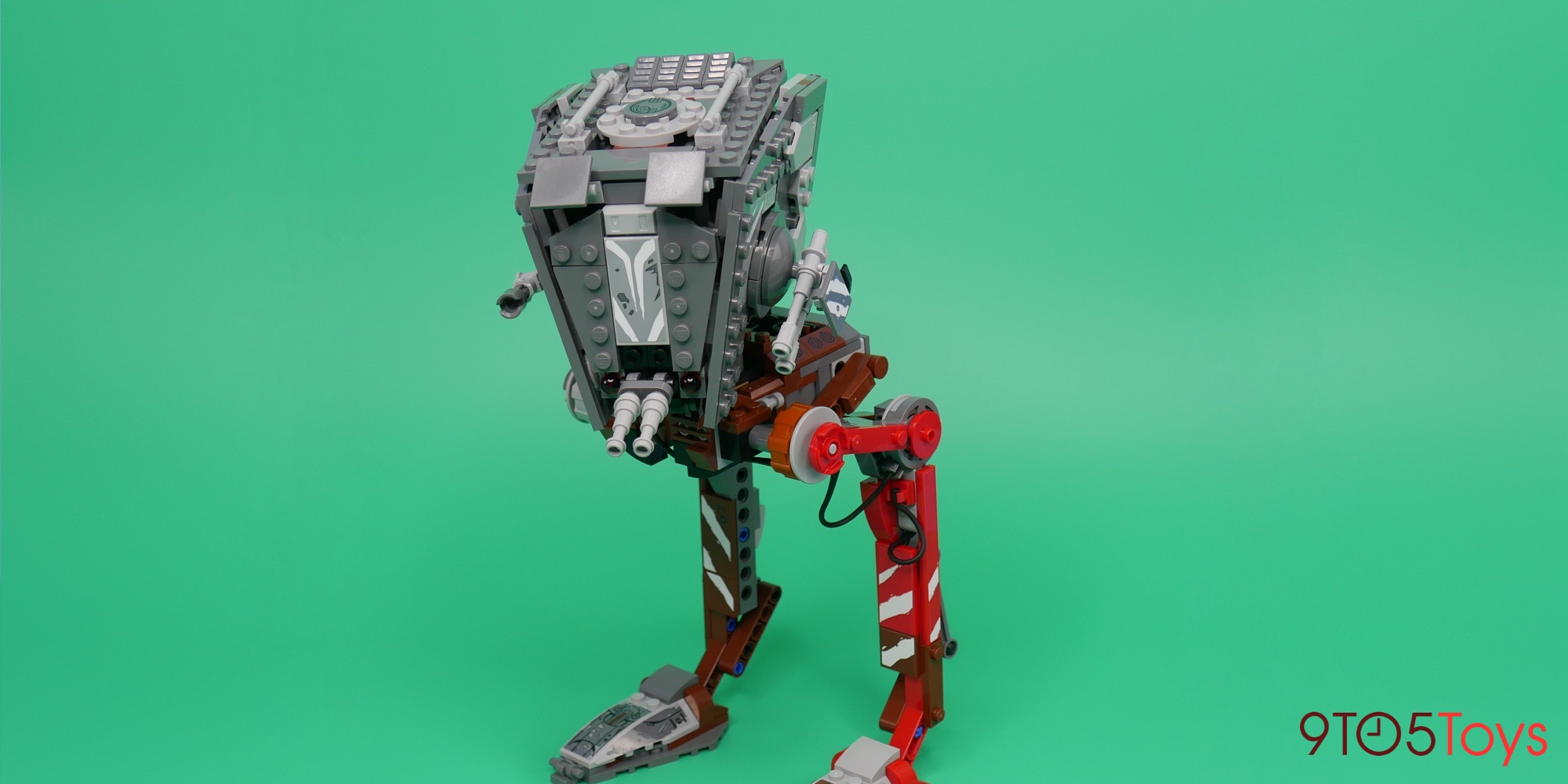 To truly nail down the aesthetic and add to the AT-ST’s history following the fall of the Empire, LEGO has done more than just some color palette swaps on the Raider. There are no wires that wrap around the sullied left leg, stickers that show it’s been through some action in battle, and more.

On top of the other new inclusions, one thing that LEGO has done exceptionally well is implementing tiny details. There are a few places where this stands out, but mainly, you’ll notice it on the hip section. Taking advantage of some black paint roller elements, LEGO has managed to create some fantastic little greebles on the AS-ST Raider. Usually, these patches of brickwork are reserved for the UCS Star Wars lineup, but this time around, it looks like The Mandalorian is worthy of the same techniques.

Despite all of these aesthetic additions, it’s still undeniably an AT-ST, but the Raider version brings the famed Original Trilogy vehicle into a post-Empire world. Unfortunately, for now, we’ve yet to see the vehicle make an appearance in The Mandalorian. So in terms of how accurate it is to on-screen presence, that remains to be seen. Even so, I think that the set designers nailed the aesthetic they were going for, and this model stands on its own regardless of if you’re a fan of the show. 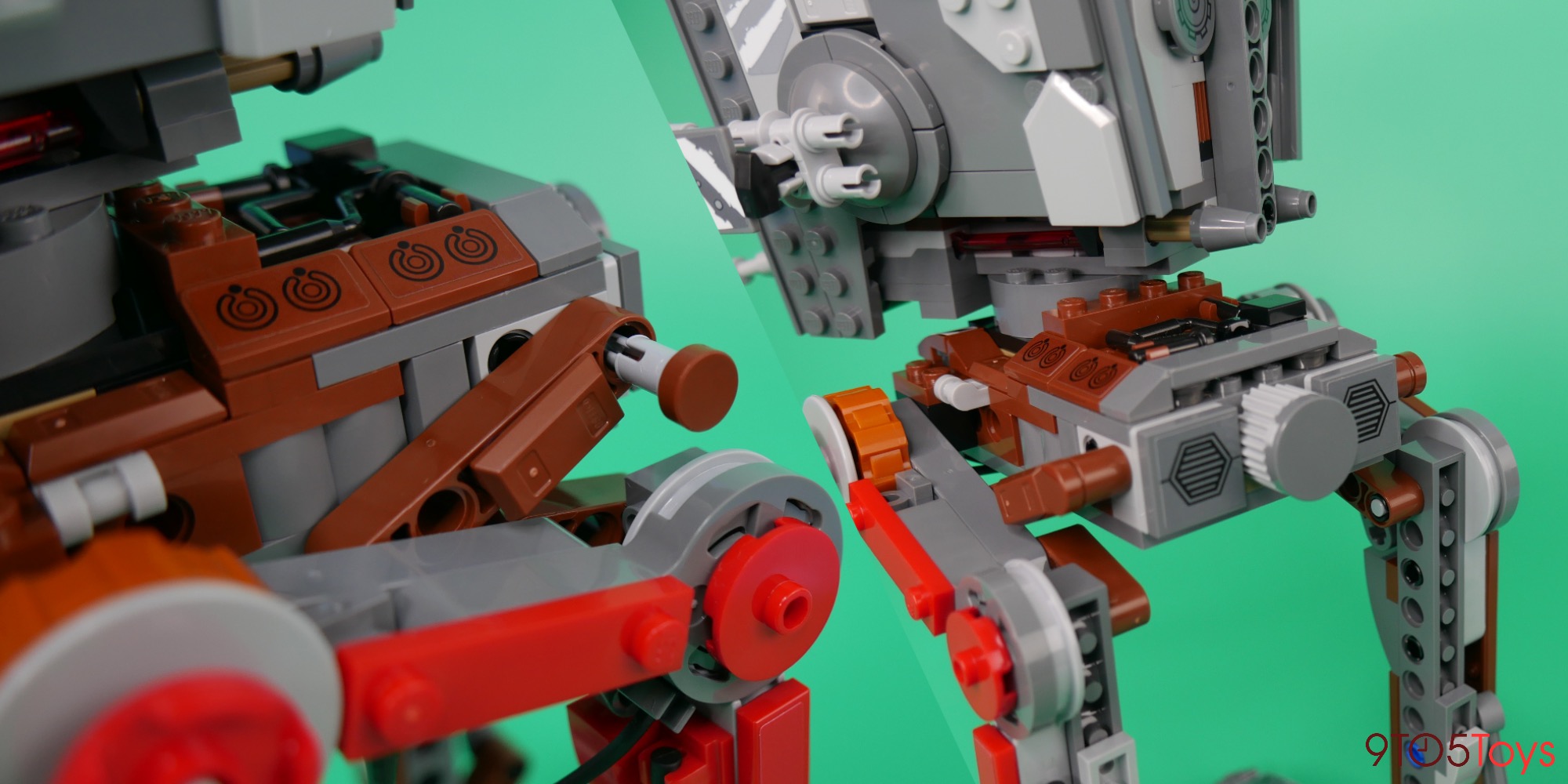 Aside from the brick-built details that adorn the exterior of the AT-ST Raider, LEGO has opted for a pretty standard design for most of this creation. There aren’t too many building techniques that stand out from the norm.

One area that does exhibit some notable building techniques are the legs, both of which on the AT-ST Raider are posable thanks to a redesigned set of instructions. Past versions have sacrificed on authenticity in favor of stability, but this time around, LEGO has found a way to keep both at odds with each other. There’s now a system of pins that lock some Technic beams into place and accomplish that looks just as complex as the vehicle would in real life.

Another inclusion, or exclusion actually, that older fans are sure to enjoy is that play features have been kept to a minimum in this kit. LEGO leaves most of the interactivity to a mechanical that allows you to rotate the AT-ST Raider’s head by turning a knob on the back. There’s also the spring-loaded missiles, but at this point, these are pretty standard inclusions on a Star Wars set like this.

All-new minifigures from The Mandalorian 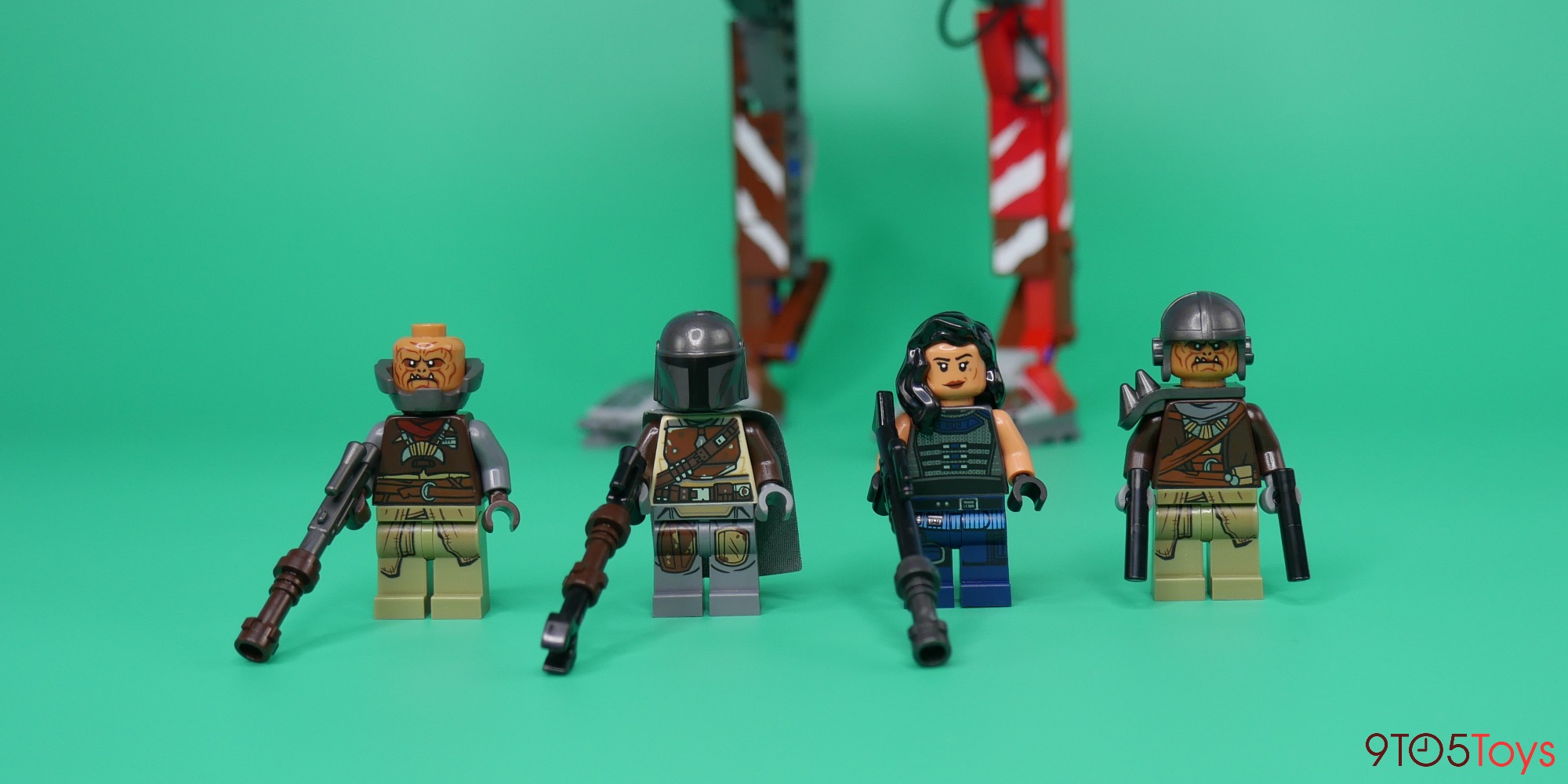 To complement the new theming present on the AT-ST Raider, LEGO has included some minifigures that differ from the norm on an Imperial vehicle like this. Gone are the Stormtroopers, or even the occasional Chewbacca figures that have come to be expected. Instead, you’ll find four all-new characters from the expanded universe of The Mandalorian.

Fittingly for the Disney+ series, you’ll find The Mandalorian himself alongside Cara Dune and two Klatooinian Raider minifigures, the latter three of which have yet to make their debut in the show as of the first episode. Regardless, each of the brick-built characters are some of the more unique additions to a set.

All four of the included figures make their LEGO debut in the AT-ST Raider and feature a series of new torso and leg printings, faces, and in the case of the bounty hunter, a new helmet. The Mandalorian fig nails the source material and comes decked out in an ensemble of printed pieces that have some top-notch decals.

Alongside its other strong suits, this creation also enters with a healthy part per dollar ratio.  At $49.99, LEGO includes 540 pieces with the AT-ST Raider kit, which equates to $0.09 per brick. Gone is the usual Star Wars tax, and in place, a reasonable price tag.

At the time of writing this review, the LEGO AT-ST Raider is currently marked down to $40 at Amazon and Walmart. 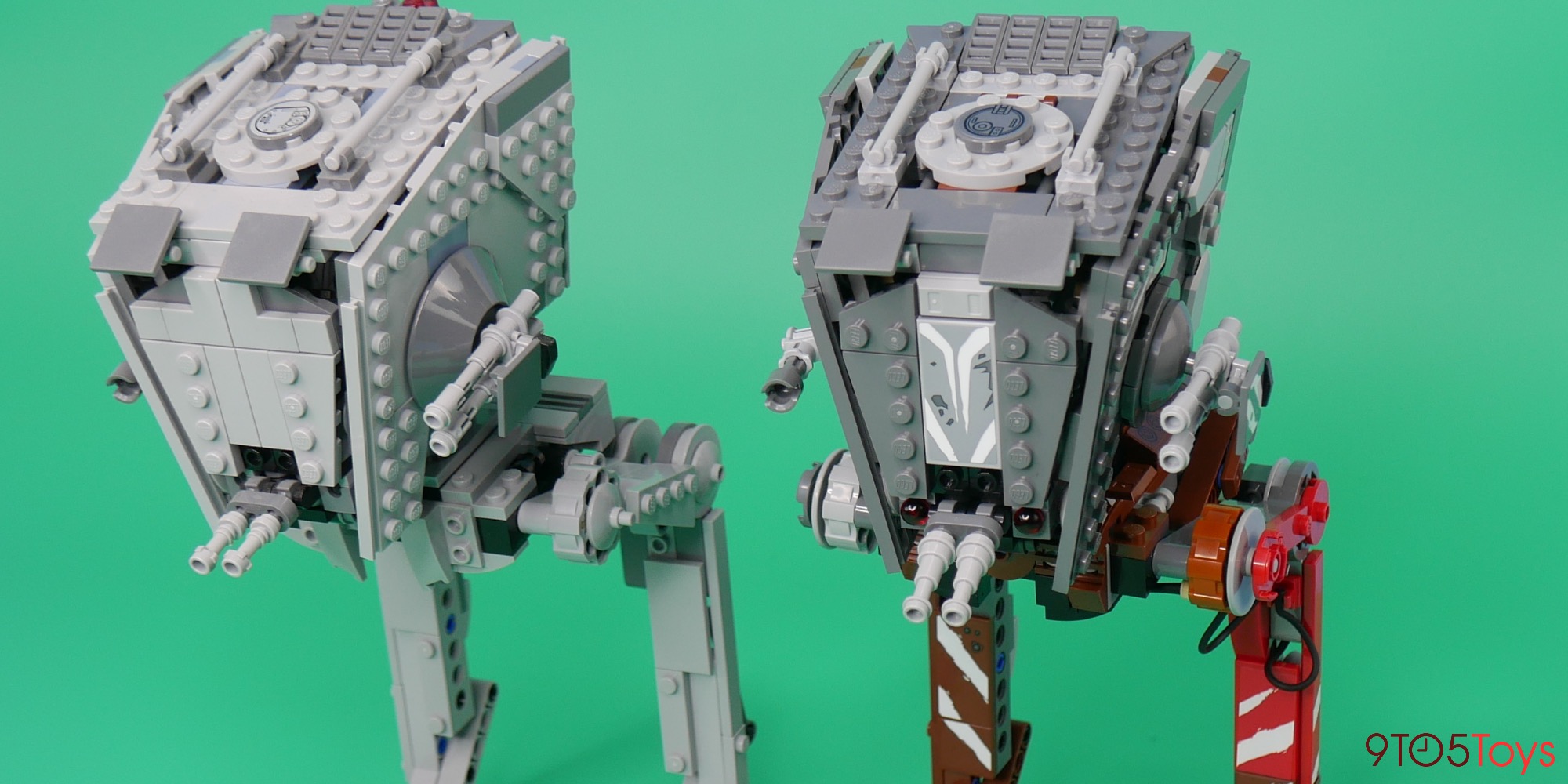 LEGO has been on a recent trend of reissuing previously-released sets with some subtle changes. Some like the 20th Anniversary Snowspeeder don’t do a particularly solid job at that, while the AT-ST Raider excels. The new aesthetic changes that LEGO has applied to the build genuinely make it stand out, and I’d welcome this approach every time over redesigning the same creations every few years.

After our review, it is easy to recommend the LEGO AT-ST Raider set. The build offers a fun finished model, great details, unique minifigures, and a reasonable price. For $50, this set is just as strong as any of the other Star Wars sets out there. But at the sale price of $40, it’s a steal for anyone looking to bring a piece of The Mandalorian to their brick-built collection.