Review roundup: Kindle Voyage is unanimously the best e-reader ever but is its $199 price tag justified? 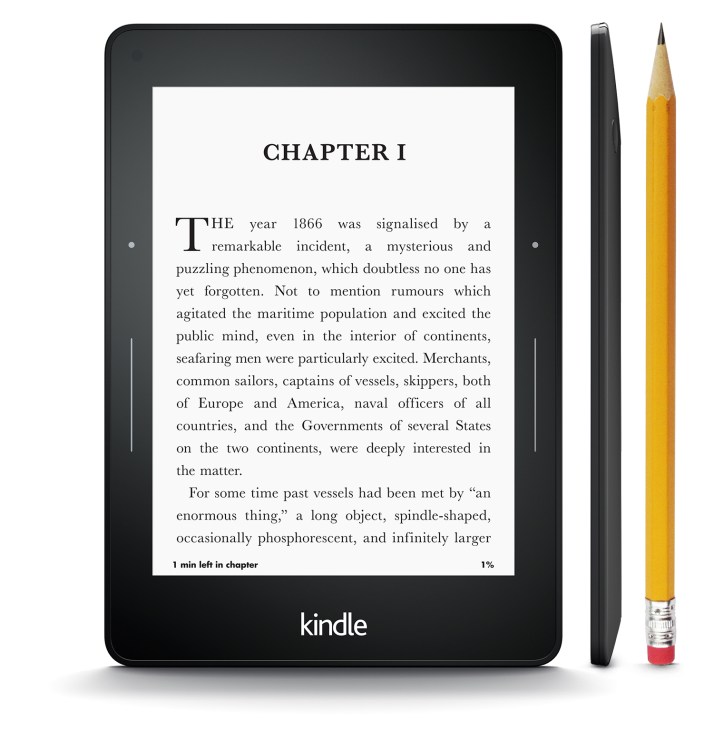 Amazon is now shipping its newest e-reader, the Kindle Voyage, and reviews have been trickling in over the past couple of days from assorted tech publications.

Kindle Voyage is a technological achievement. It packs a high-resolution 300ppi display, adaptive front light, and the all-new PagePress force sensor to simulate a page-turn. In general, reviewers absolutely love this device and consider it by far the best electronic reading experience ever. But at $199 are these features worth a $120 up-charge over the new Kindle or even an additional $80 compared to the Paperwhite? That question isn’t as easy to answer…

Speaking of the screen, Amazon is touting that the Voyage’s 300dpi display is the best ever on an E Ink Kindle. They’re not lying: this is simply the best E Ink display I’ve ever seen. It’s certainly better than the gray-brown pages of the secondhand paperback you’re reading, and unless you’re really into $75 high-gloss coffee table books, it’s probably better looking than just about everything in your bookshelf. The Paperwhite was already fantastic both in terms of contrast and resolution, but if I looked closely enough, I could see ragged little edges on characters. On the Voyage, I can’t. It’s just smooth. Amazon has also improved the grayscaling to the point where graphics aren’t visibly dithered; clearly, as always, this device is primarily intended for text, but images (in the Kindle Store, for instance) won’t trigger your gag reflex.

You keep your thumb resting on the button and then press lightly to make the page turn forward or back, depending on whether you touch the top or bottom button. You also get a some haptic feedback — a slight buzz on your finger — with each page turn. Amazon calls the new feature PagePress and it works well.

I’ve always been a reader of physical books in the past, but I did fall in love with the Kindle Voyage. It was just so light and easy, and whether I was going to work or out at night, I was more likely to pop it in my purse for some train-ride reading than I was when I needed to carry around a bulky book.

The last time Amazon’s higher-end Kindles got a redesign was two years ago, so it’s no surprise that the Voyage represents the most dramatic overhaul since that time Amazon gave up on physical keyboards. Gone is the Kindle’s longstanding curvy aesthetic: The Voyage borrows considerably from the Kindle Fire’s design language, with a more angular back fashioned out of magnesium and capped with glossy black plastic. The magnesium, as it turns out, was a really good call. After a week of tossing the Voyage in and out of my bag (which is sort of a gadget minefield, to say the least) there weren’t any scuffs or smudges that a few seconds of frenzied rubbing couldn’t take care of. Alas, the Voyage’s matte rear (which is where the power button now lives) is a magnet for your greasy fingerprints, so reading and eating chips is inadvisable if you’re stickler for appearances.

That magnesium chassis makes the Voyage a little lighter, too, which some of you will notice more than others. If (like me!) you’re the sort of person who grips an e-reader in one hand, with a pinky helping to stabilize things, that weight reduction makes a surprisingly significant difference. Oh, you’re a two-hander? You probably won’t be able to tell.

This is where Amazon shines. The tight integration between the Voyage and the retailer’s robust Kindle store and offerings are possible because the company doesn’t have to worry about apps, cameras or platforms. The Kindle Fire and Fire Phone need to play nice with other systems and a bevy of apps. The Voyage and other Kindle ereaders have to do one thing well, give readers access to thousands of books at all times. The biggest feature of the Voyage is the biggest feature of the Paperwhite and $79 Kindle: Amazon.

Compared with previous Kindles, text on the Kindle Voyage appears both sharper and in starker relief against the background. Graphics, like charts and graphs, look just as clear as they do in any black-and-white book.

Amazon says the Voyage offers a better approximation of print than has ever been available on an e-reader, but for me, it’s far better than that. It offers the visual clarity of printed text with the flexibility of an electronic device.

Given that combination, the Voyage functions as something like the executioner of the trusty old hardcover. Until recently, there were only two remaining reasons to hang on to books — either you just couldn’t get on board with the way a Kindle page looked, or you were suspicious of Amazon’s power and larger motives in the publishing industry, and you saw the printed book as the only bulwark against its overreach.

This new Kindle, which starts shipping to people tomorrow, Oct. 21, is smaller in every dimension than its predecessor. It’s lighter. It has sensors on the sides of its screen for flipping pages without moving a finger, and a built-in light automatically senses your environment and remembers how much light you like to use for reading.

But it costs $199. That’s pricier than Amazon’s Kindle Fire tablets, which have color screens and more functionality. It’s more than several models of Android tablets. And it’s almost as much as the least expensive iPad, which now costs $249. To put things in perspective, a Kindle hasn’t been this expensive since more than five years ago, when Amazon introduced its second-generation Kindle for $359.