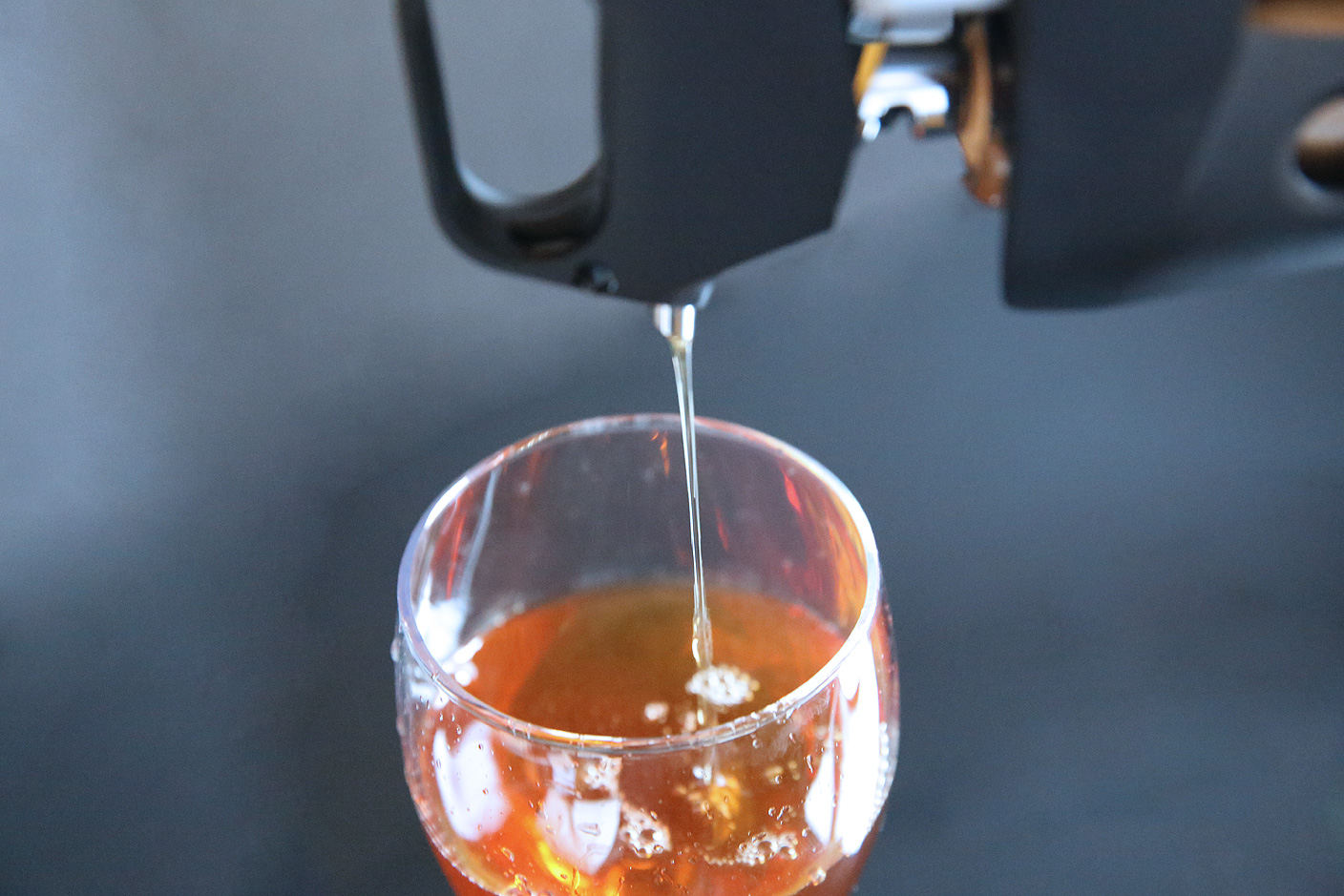 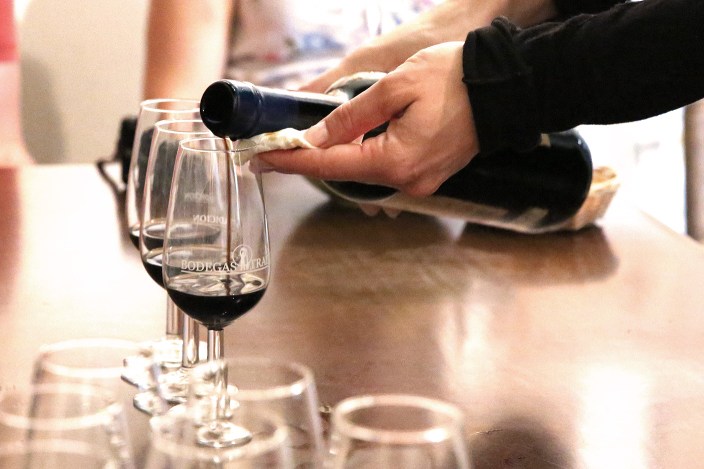 As the last few Kitchen Tech columns on bar tools (part 1, part 2) and high-end coffee makers probably demonstrated, I’m a beverage obsessive — over the years, I’ve learned that great dining experiences are as much about what you drink as what you eat. The right beverage can actually improve your entire meal, and if it’s served in the right way, something as seemingly simple as wine or champagne can become the most memorable part of a night. There are great reasons to bring that sort of restaurant-quality experience home.

Today’s Kitchen Tech focuses on Wine Tools, including eight categories of items that range from mandatory to optional. Where appropriate, I’ll explain the benefits and issues of a bargain or higher-end option. To kick things off, I’m starting with something that’s highly optional and just starting to appear in some U.S. restaurants, a Spanish wine tool called a porrón. Read on… 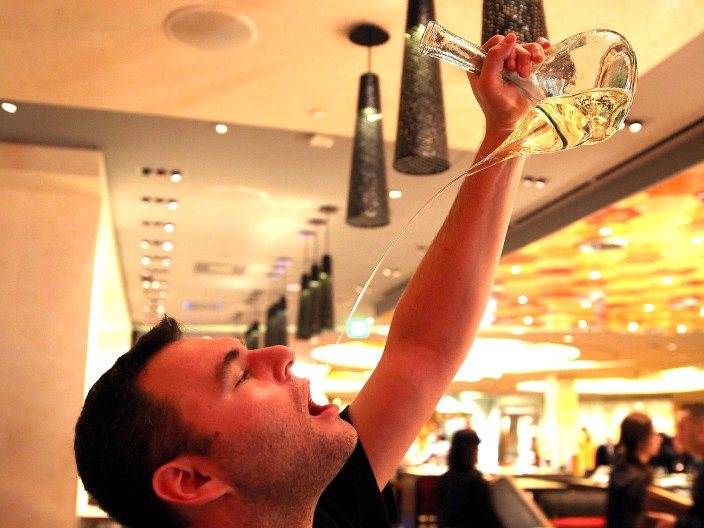 You’re probably already familiar with most of the items in this wine tools guide, which is why I’m starting with the Spanish pitcher called a porrón – a fun glass wine vessel that’s starting to make its way into American restaurants (and homes) thanks in large part to the Las Vegas and Washington, D.C. Jaleo restaurants. A porrón holds around 750ml of liquid, letting a group of people pass around a full bottle of champagne or wine without the need for a glass. The challenge is to pour the stream of wine directly into your mouth from a distance without spilling anything or touching the porrón to your lips.

The best option we’ve seen is the La Tienda Glass Porrón ($23), which currently has an Amazon rating of 4.6/5 stars. It comes with a natural cork, and the glass is both strong and consistently well-made. Do you need one? No. But once you’ve seen how much fun people have with porróns of champagne (or Spain’s equivalent, cava), you’ll want to master the skill — and have one of your own. 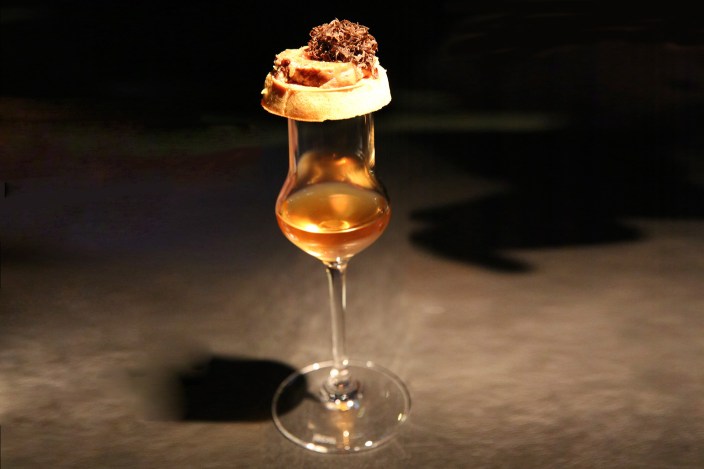 There’s one main reason wine aficionados focus a lot on glassware: the shape of the glass you choose can significantly affect the flavor — more accurately, the scents — you perceive in your wine. For instance, if the top of the glass is too narrow, your nose won’t be exposed to the smell of the wine, a major factor in appreciating the full character of whatever you’ve purchased. 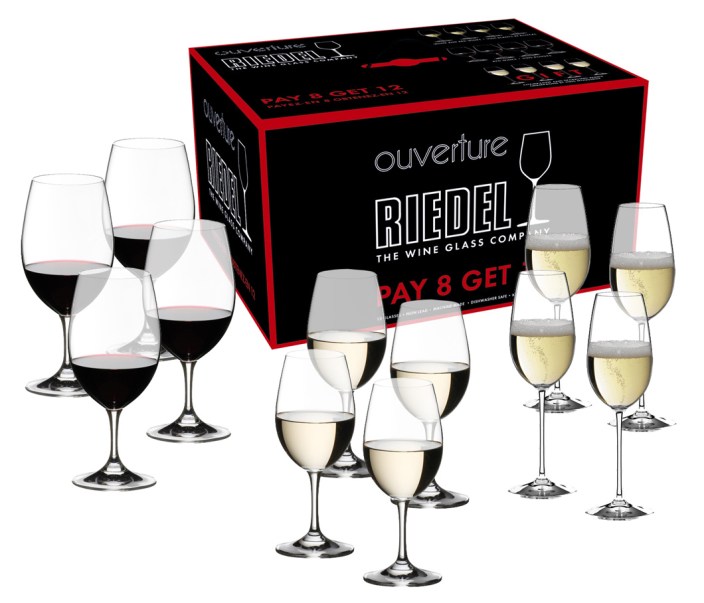 Austria’s Riedel is widely considered to be the gold standard for wine glasses, having developed “varietal-specific” glass shapes to optimize the presentation of each specific variety of wine you can imagine, as well as “wine-friendly” glasses that work well with multiple varietals. The quality of the glasses is superb, and they’re designed to last, factors that differentiate them from less expensive alternatives. My advice would be to pick a Riedel starter set that’s broadly suited to the three most common types of wine. Great value can be found in this Riedel Ouverture Set of 12 ($87, or $7.25 per glass), which includes four glasses each for red wine, white wine, and champagne. If you prefer to try only one type of glass, a top pick is Riedel’s Ouverture Magnum, which typically goes for $10 per glass but can be had at a discount here. 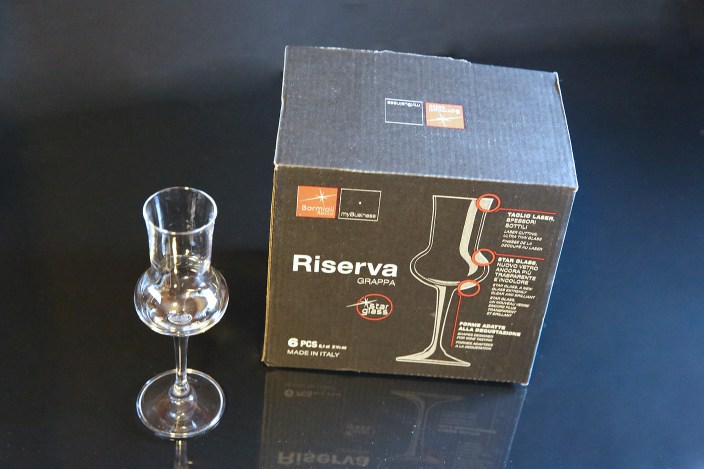 Leading Italian glassmaker Bormioli Rocco makes excellent glasses that are ideal for specific applications. The Riserva Grappa glass above ($20 for 6) can be used for sample-sized pours of rare wines, sherries, and liquors, as well as for serving Spanish tapas in the classic style — a tapa atop a small glass of wine, as shown above.

A wine decanter is designed to expose a previously corked bottle of wine to fresh air, bringing out aromas and flavors that were previously locked inside the liquid within the bottle. There are thousands of options out there, including really beautiful ones such as the Luigi Bormioli Magnifico (left, $29) — note: not the similar-sounding Bormioli Rocco — which is one of many options from a popular Italian glassmaker that are billed as safe to dishwash but tend to be overly fragile and chip-susceptible. Instead, I’d suggest a highly-rated alternative with a more classic shape, like the Sagaform Wine Carafe with Oak Stopper (center, $35), which has a 4.6/5 rating on Amazon and comes with an oak sphere as a stopper. 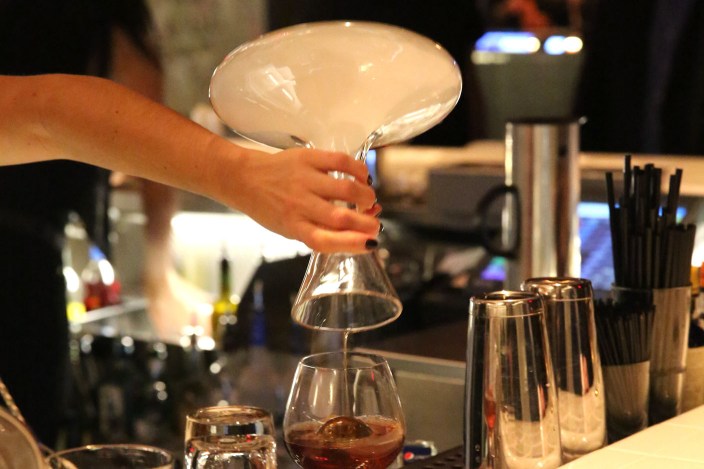 Another great choice is Wine Enthusiast’s Vivid Wine Decanter ($40, above), which is Amazon-rated 4.4/5 stars. This carafe looks a lot like Sagaform’s, but has a substantial-enough weight and thickness of glass to be useful for purposes beyond just decanting wine. We recently saw a carafe of this style being used to infuse smoke into cocktails, surviving some sideways and upside-down swirling motions without any fear of breakage. 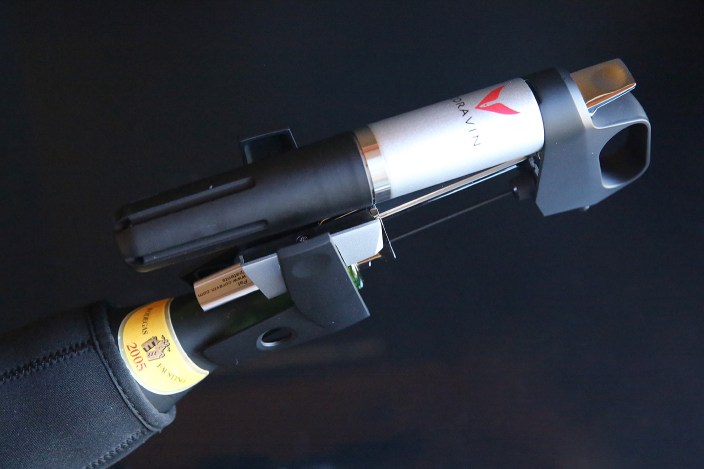 Great wine can be expensive. A couple dining at home may not want to drink an entire bottle of wine with a meal. Similarly, multi-course meals are best complemented by a variety of different wines rather than just a single bottle. For all of these reasons, wine preservation systems — devices that let you pour wine from one or more bottles without fully opening them — are becoming popular. 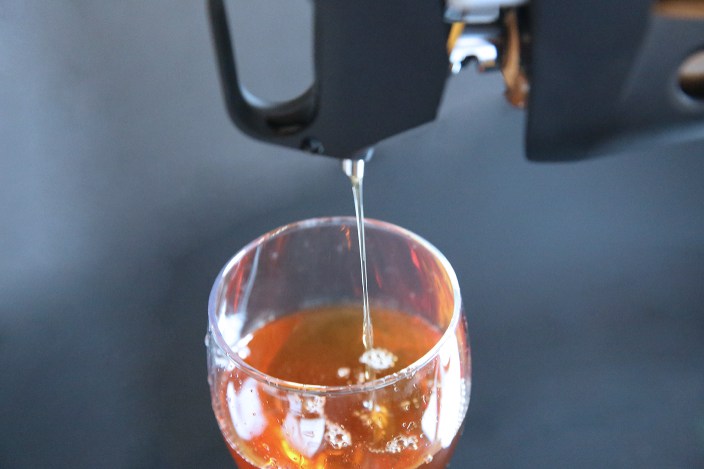 There’s a restaurant-quality gold standard for wine preservation, and a more affordable consumer option. Sommeliers at top restaurants around the world strongly recommend the Coravin 1000 ($299), a beautifully made device that includes everything you need to serve single glass portions from bottles of wine without disturbing the rest of the bottle’s contents. The Coravin sits on top of the bottle, uses a needle to pierce the cork, and lets you pour as much wine as you want, filling the emptied space in the bottle with inert Argon gas. Once you’re done pouring from a given bottle, you pull the Coravin from the cork, wash the Coravin off, and place it on the included metal stand until it’s needed again. 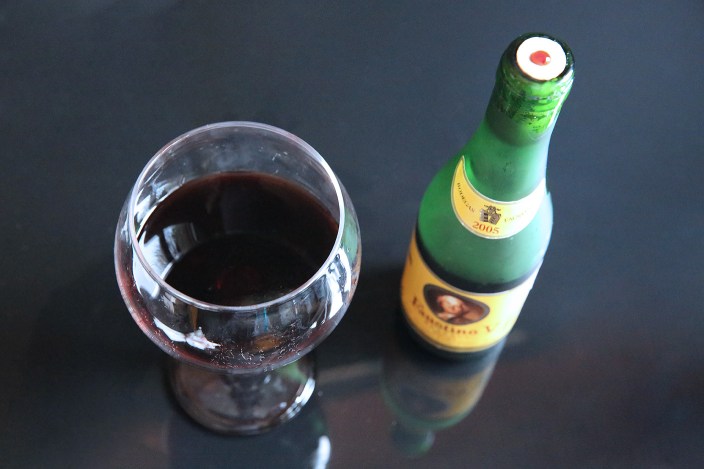 In our testing, the Coravin worked exactly as promised, enabling both easy individual portioning and preventing pierced bottles from ripening before their time. That said, it bears mention that many wine bottles have shifted from traditional corks — which Coravin works fully with, as real cork re-seals itself — to synthetics and other types of caps that may not re-seal. This particular solution is ideal for higher-end bottles of wine, and people who want to compare and appreciate them over time. 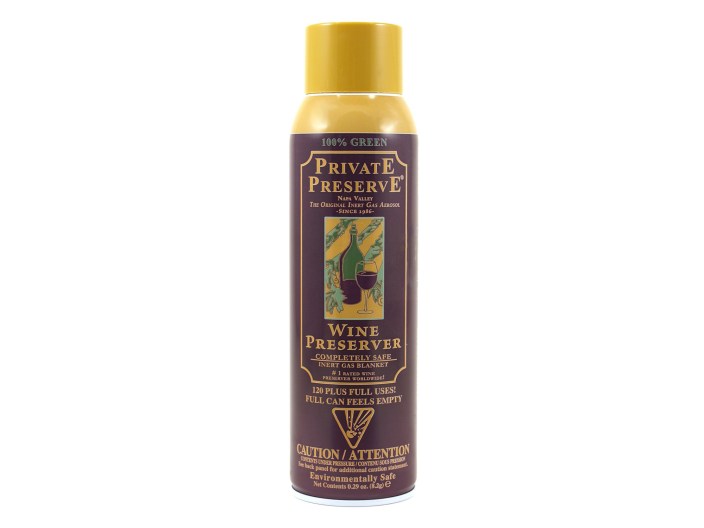 A more basic version, Private Preserve ($10 each), removes the gadget elements from the equation. It’s a can filled with inert gases that you manually spray into a bottle during the opening and serving process, re-corking thereafter. Serious wine enthusiasts will likely prefer the all-in-one approach of the Coravin to the DIY Private Preserve system, but Private Preserve and a self-supplied replacement stopper may be a better solution for wines with metal or synthetic cork tops. 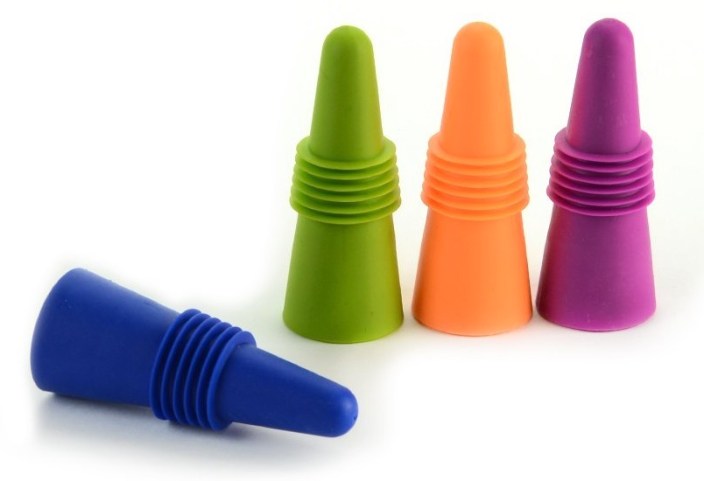 When it comes to replacement stoppers, you have tons of options: wine stores sell all sorts of real and synthetic corks, including fancy ones with jeweled tops and real cork bottoms. We tend to prefer well-built rubber stoppers that are easily washed, seal bottles well, and cost very little. Sold in a set of 4 for under $11, Carlton Kitchen’s Wine and Beverage Bottle Stoppers received a rare 5/5 rating on Amazon, combining stainless steel and ribbed silicone rubber in a fun, attractive enough way. They’re very similar to Metrokane’s Rabbit Wine Bottle Stoppers, which earned a 4.6/5 rating on Amazon and sell in quantities of 1, 3, 4, or 10. Some of the Metrokane accessories we’ve tested in the past feel a bit cheap, but these come widely recommended. 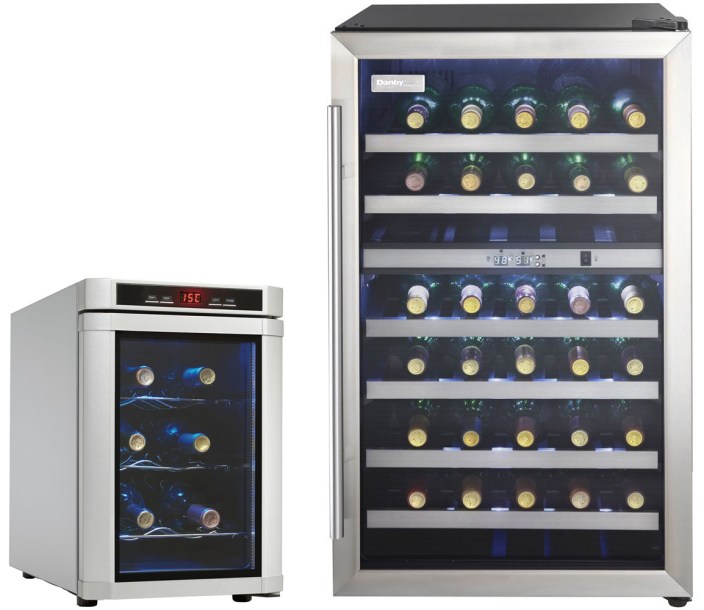 The three key factors that will maximize your wine-drinking experience are choosing the right glassware, following the right aeration/decanting process, and serving at the correct temperature. Light whites and champagnes should be served quite chilled (40°-50°F), fuller whites and light reds a little warmer (50°-60°F), and full reds or ports at just below room temperature (60°-65°F). While you can manually bring the temperature of each bottle down using a wine bucket and ice, or a traditional refrigerator, small wine fridges can handle chilling for you by maintaining the correct temperature at all times.

Sommeliers tend to recommend dual-zone/dual-temperature models such as Danby’s Designer 38-Bottle Free-Standing Dual-Zone Wine Cooler ($430), since they are capable of creating white and red wine zones for you. If you have the budget for one, go for it — the only complaint we’ve heard from some users is that the dual zone separation isn’t always spot-on with the dialed-in temperature you specify. If you want to start smaller and simpler, consider an entry level model such as the $80 Danby 6-Bottle Wine Cooler or $100 12-bottle version; there are also $108 17-bottle and $279 36-bottle versions of this mini fridge. They only support a single temperature setting, but run silent and can hold enough wine for the typical home.

Although having a good corkscrew is critically important to opening up (some) bottles of wine, there’s no single right selection here — but some are better than others. We use but don’t particularly love the Pedrini 7-Inch Soft Grip Corkscrew ($11), which is made from steel, has a bottle cap opener built in, and uses rubber-tipped arms to open a bottle. It works well enough, but has a 2.6/5 Amazon rating due to an unusually high rate of breakage. Consider instead HiCoup’s Waiters’ Corkscrew ($11), a restaurant-style folding option that earned 4.9/5 stars on Amazon; beyond the central screw, it includes a small knife capable of removing capsule seals on wine bottles. Also rated 4.9 out of 5, the modern-looking steel Brabantia Classic Corkscrew ($13) makes actual cork removal particularly easy using a plunger system, though its capsule-cutting tool has been called inadequate by some users. 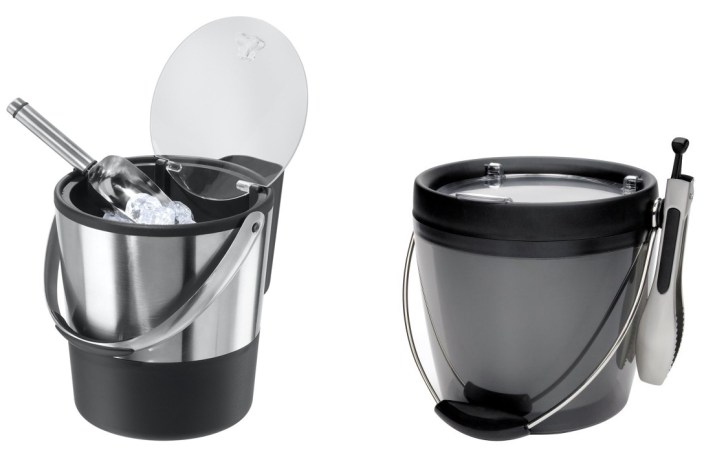 Last but not least, there’s the classic ice bucket, which can be used just to hold ice, or to chill a bottle of champagne for tableside service. Depending on your personal needs, an ice bucket can be purchased largely for functionality or for beauty. Top-rated functional ice buckets include the half-metal, half-plastic Oggi Double Wall Ice Bucket ($33), which earned 4.7/5 stars on Amazon and includes an ice scoop, and the OXO Good Grips Plastic Ice Bucket with Ice Tongs ($40), which earned the same 4.7/5-star rating and comes with tongs. While they’re not made from the fanciest materials, they’re built to remain cool and work equally well for chilling a bottle or actually serving ice at a party. 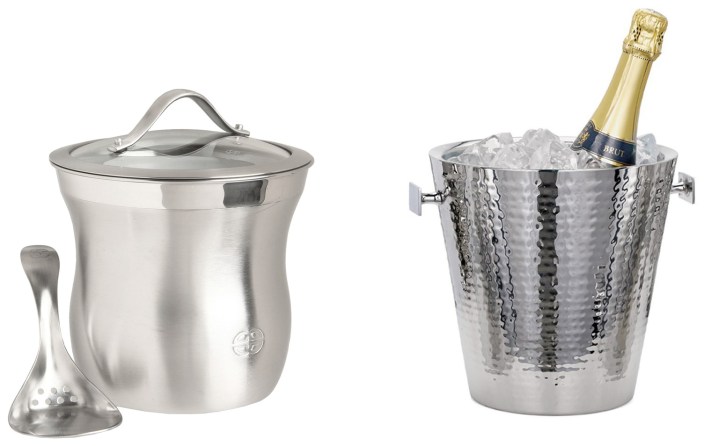 If you’re looking for something beautiful, consider the Calphalon Ice Bucket Set ($58), which has an Amazon rating of 4.8/5 stars. Made from steel rather than plastic, it includes a glass and steel lid, plus a perforated ice scoop that helps to keep water out of drinks when it’s used for serving ice. An even nicer option is the Torre & Tagus Kiro Hammered Stainless Steel Double Wall Champagne Bucket ($90), which as the name suggests is made from modern-textured steel and has an interior wall to absorb the freezing cold temperatures, reducing moisture buildup on the outer wall. If you’re looking to really impress someone, this is the one to pick.

Want to learn about other professional-grade food and beverage solutions for your home kitchen? Read more of my Kitchen Tech columns and reviews here.