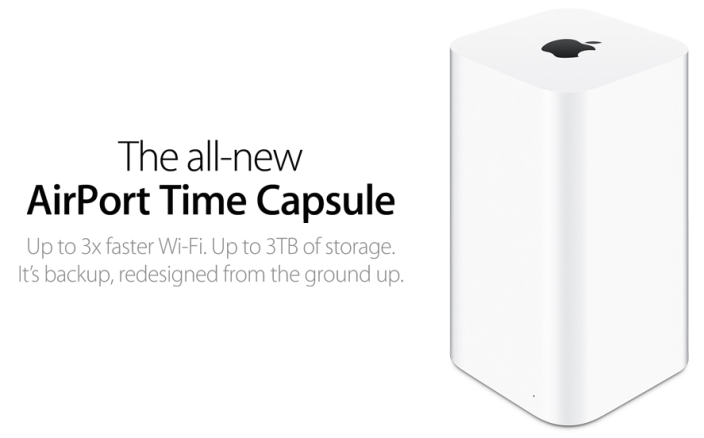 Amazon offers Apple’s baddest AirPort Time Capsule, the 3TB version, for just $349 shipped. That’s $50 below retail (or 13%) and the best deal we’ve seen. Apple’s high-end networking solutions aren’t discounted too often, so if you’ve been eyeing one now would be the time to strike. As a further pricing comparison, Apple sells a refurbished model for only $10 less. B&H and BuyDig are also currently running the same deal.

Apple’s Time Capsule is a jack of all trades. It acts as a 802.11ac wireless router, wireless backup solution, and can share USB peripherals like an external hard drive or printer. The 2TB is also on sale for $277.99 (Reg. $299).

Throw a 5TB Seagate USB 3 Hard Drive in your cart for $139.99 and you’ll have a total of 8TB of backup and server space or at least another 5TB backup.

Back up a lifetime’s worth of memories with AirPort Time Capsule, a wireless hard drive that works seamlessly with Time Machine in OS X. It’s also a full-featured Wi-Fi base station with the latest 802.11ac technology and simultaneous dual-band support. Choose from 2TB and 3TB models. Automatic wireless backup.

AirPort Time Capsule includes a 2TB or 3TB hard drive that works with Time Machine in OS X to create the perfect no-hassle backup solution.1 There are no cables, and you can back up all the Mac computers in your home to a central location — automatically, wirelessly, and in the background.

With 802.11ac technology and a powerful beamforming antenna array, AirPort Time Capsule gives you up to 3x faster Wi-Fi and a stronger, clearer signal.2 And because it transmits at both the 2.4GHz and 5GHz frequencies at the same time, your wireless devices will automatically connect to the best available band for the fastest performance possible.

Designed with performance in mind.

With the antennas at the top of the elevated design, AirPort Time Capsule now has a higher platform for dispersing the signal. We also increased the number of antennas. There are now six of them — three for the 2.4GHz band and three for the 5GHz band. Together with 802.11ac technology, they let you connect faster, farther, and with more power than ever before.

Connect your DSL or cable modem to AirPort Time Capsule and use the built-in setup assistant to create your new wireless network in just a few taps from your iPhone, iPad, or iPod touch. If you’re using a Mac, use the built-in AirPort Utility. Setup is just as fast and just as easy.

AirPort Time Capsule can turn any external USB hard drive into a secure drive you can share across your Wi-Fi network. So all the documents, videos, photos, and other files instantly become available to anyone, Mac and PC users alike. You can even connect a printer and share it wirelessly.

Any Wi-Fi device you have will work with AirPort Time Capsule. That’s because it’s compatible with devices using the 802.11a, 802.11b, 802.11g, 802.11n, and 802.11ac specifications. And since AirPort Time Capsule features a built-in firewall that protects your network from malicious Internet attacks, you can enjoy the web with peace of mind.