BuyDig’s Official eBay Store offers the DJI Phantom 3 4K Quadcopter for $499 shipped. For comparison, this drone originally retailed $999 but has recently dropped to around $650+ at retailers like B&H. Today’s deal is the best price that we’ve seen.

The DJI Phantom 3 4K offers many similar features to the Standard model but opts for an upgraded high resolution camera. It is capable of streaming a live feed to your iOS or Android device via the built-in Wi-Fi radio. Additional features include GPS navigation, auto take-offs/landings, and an “intelligent high power flight battery”. Learn more in our launch coverage from back in January. Rated 4.3/5 stars.

The Phantom 3 Professional continues the proud tradition of DJI’s Phantom series and brings several important innovations to the Phantom’s rich feature set. The Phantom 3 Professional carries a fully stabilized 3-axis 4k UHD video camera for smooth, crisp videos and still photos. To allow you to see what the drone sees, DJI has engineered a new generation of their Lightbridge technology that allows 720p HD digital streaming of live video directly from the drone. You can control the camera and see video in real time as you fly and you can even share the video using the DJI Pilot app’s advanced features. 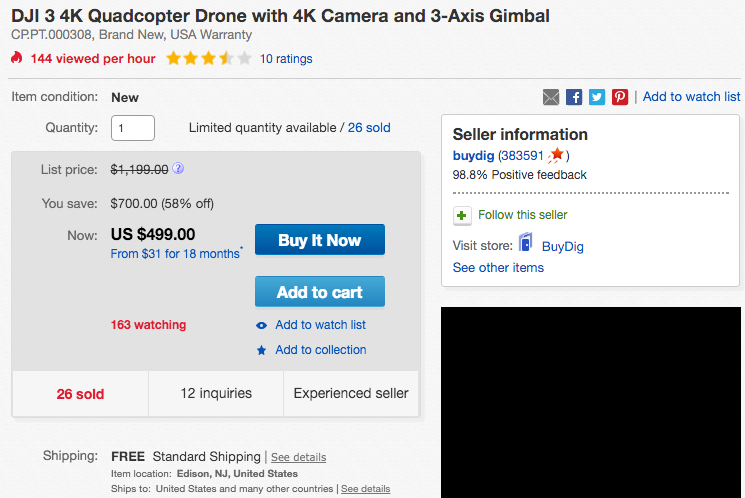