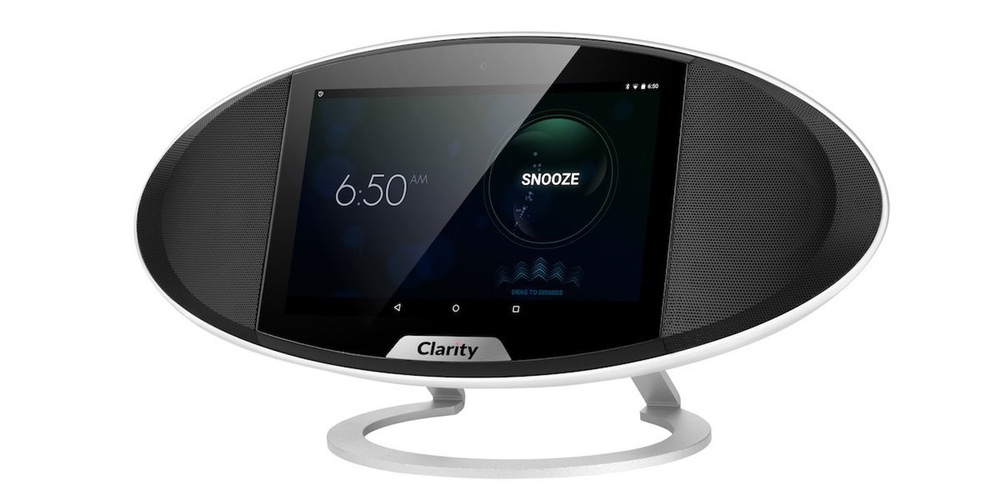 The smart speaker race is heating up with many on one of two sides: Google or Amazon. But now Clarity, a third party smart speaker, combines the best of both worlds by embracing Alexa and Google Assistant. It also has a 7-inch touchscreen system running Android 6.0 Marshmallow, giving it some extra visuals and functionality that you don’t see yet from the Amazon Echo or Google Home.

Clarity has two 5-watt speakers with big sound chambers as it plays music, podcasts, audiobooks, and more. Content plays directly from Clarity through internet radio stations and streaming services, or by connecting a personal device. The speaker will be able to control just about any smart home system compatible with Alexa and Google such as products from Nest, Hue, Samsung SmartThings, and others.

The screen provides a resolution of 1280 x 800. A built-in camera that allows it to act as an Android tablet with apps and services like Netflix and Skype. You can access and enjoy any of your favorite apps straight from the Google Play store. Clarity is powered by a quad-core CPU. All this weighs in at two pounds with a battery life of 6 hours of audio and 2.5 hours of video. It is also the first and only Alexa-enabled device to feature a multi-touch screen.

Clarity is the first device to allow people to use both the Amazon Alexa and Google voice assistants. A range of service and skills can be accessed through simple voice commands, such as – “Alexa read the news”, “Alexa play Adele” ,“Hey Google show me the route to the office” ,“OK Google set my alarm for 7 a.m.” Because Clarity also has a built-in touchscreen, it can display as well as play results found by these services.

Because of its early success, Clarity has extended its IndieGoGo campaign. Through April 30, the Clarity Speaker is available for a discounted price of $149. After the device ships in June, it will retail for $199.

Clarity has been designed and is manufactured by Pan Sea Co., Ltd., a company with a proven track record specializing in intelligent electro acoustical products such as SoundPad. Its team has over 20 years of experience in consumer electronics and acoustic technology and has spent three years developing Clarity. “The response and demand for Clarity has been fantastic, beating all of our expectations,” said Dake Liu, CEO of Pan Sea Co. “We are proud to have a developed an intuitive device with a number of industry firsts and are extending our presale campaign after popular demand to give even more people the chance to secure the Clarity Speaker at a discounted price.”