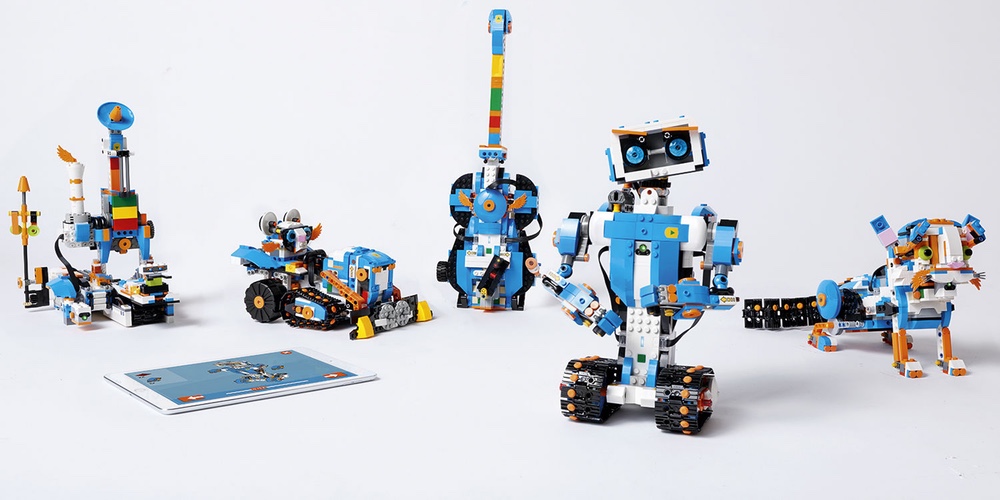 Back in January at CES 2017, LEGO introduced a new line of products called Boost aimed at getting kids to learn coding in the funnest way possible. It’s very similar in nature to LittleBits latest kit which coincidentally also goes on sale today at a much higher price. Today the new line of “smart toys” are available for pre-order exclusively from LEGO and will start shipping in late July.

The $159.99 kit comes with two motors, a color and distance sensor, and all the other parts needed to build a LEGO cat, robot, guitar, vehicle, or imitation 3D printer. Your kids will be able to control their creations with an Android or iOS app, using a basic drag-and-drop programming system easy enough for anyone to learn how to use. The app is free to download and once you have it you can start building your creations and controlling them.

The Lego Boost kit comes with three Boost bricks that do most of the robotic heavy lifting, including a tilt sensor, a color and distance sensor and a motor. The set also comes with 843 pieces and a special play mat that the robots can move on.

With Vernie the Robot (in the video above), you’ll first get to create his head, then the upper body, shoulders and then you’ll be instructed to plug in the Move Hub. When you press the green button, Vernie the robot will come to life! Since the app knows you’re building the robot instead of the other creations, it immediately assumes the character of Vernie and starts talking, asking for your name and introducing itself. It will then suggest going for a drive, but because you haven’t built his tracks yet, it will just vibrate. Vernie will then prompt you to complete his build so he can get moving.

Vernie has a lot of built-in charm as shown above. His head moves when it talks to you, and when you shake his hand (thus triggering the tilt sensor), it greets you like a friend. Kent says this is part of what makes the Boost toys feel so personal and alive. “You don’t need to program those aspects in or code from scratch,” he says. “It’s much easier than Mindstorms.”

LEGO does a great job sneaking learning into playtime. “Fundamentally we want kids to have fun first,” says Kent. “We want them to actually understand how they can put behaviors in their models, and if a byproduct of that is they learn a bit of coding, that’s great as well.”

With Boost, LEGO is trying to meet the high demand for younger and younger kids to have more tech connected toys, while still staying true to its simple building roots. The kits start shipping in late July and will be arriving in early August. Once again the kits run for $160 and are currently only available through LEGO.