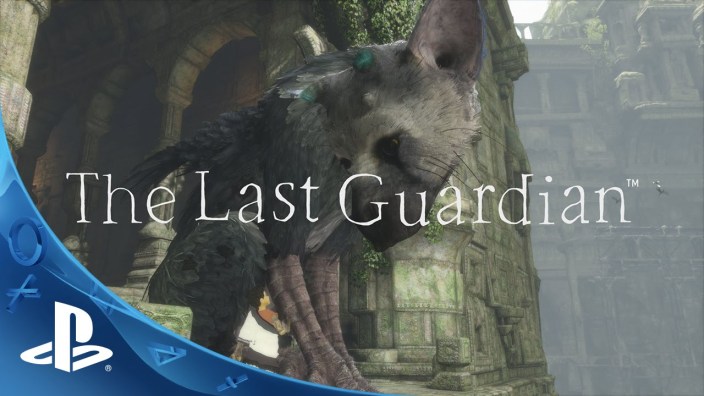 Sony has strung us along for around 6 years with the near mythical The Last Guardian. Well, it is myth no more. Sony shocked the gaming world, opening its E3 2015 showcase with a brand new demonstration for the game. It followed up with a peek at the new Hitman, the next Destiny expansion, the long rumored Final Fantasy VII remake, and finishing up in usual fashion with a look at the next Uncharted:

The artistic and gorgeous looking title directed by Fumito Ueda, looks very much like what we saw originally. Players control a young boy making his way through some kind of ruins with the help of his giant bird/cat/dog friend. It looks as though the creature aids you through the environment in a very cinematic fashion, and well, it looks incredible. It’s coming to PS4 in 2016 and you can see the E3 trailer above. Pre-orders are available now.

Uncharted 4: A Thief’s End is looking great as usual. Take a look for yourself above in the 7 minute gameplay demo and here;s some info from Sony on the game:

Several years after his last adventure, retired fortune hunter, Nathan Drake, is forced back into the world of thieves. With the stakes much more personal, Drake embarks on a globe-trotting journey in pursuit of a historical conspiracy behind a fabled pirate treasure.

Well it was certainly the year for Sony to clean out its closet, bringing a number of titles gamers have been waiting on for a very long time. Aside from the almost unbelievable showing for The Last Guardian, the long awaited Final Fantasy 7 remake in glorious HD is here. This looks a complete overhaul if the short teaser clip is any indication. While no release date has been given, it sounds like it will hit PlayStation 4, with Xbox One and PC versions coming afterwards.

Sean Murray from Hello Games stepped on to the stage for a live play through of No Man’s Sky. It features what looks like an impossibly large game world with thousands upon thousands of procedurally generated planets to explore. So big in fact, Murray said many of them have never been visited before by the developer or anyone, and that some of them never will be. Unfortunately no release date has been set, but he did say it would be announced soon.

And here’s the teaser for the return of agent 47 simply known as Hitman. While not much is known about the upcoming game, we do know PS gamers will be getting 6 exclusive contracts and beta access. No dates have been given.

And lastly, here’s another look at some gameplay footage of the stellar looking Star Wars: Battlefront. We also saw some footage at the EA event earlier, which showed off a multiplayer  “Walker Assault” on Hoth. Pre-orders have already kicked-off across all platforms.

With both Sony and Microsoft having generally game-centric and impressive showings this year, it will be interesting to see what Nintendo has in-store for us tomorrow.