It’s been a good week for toy enthusiasts. We’ve already detailed upcoming releases for LEGO and Razor. Now, NERF is shooting into the mix with a few fresh blasters. The upcoming Double-Dealer and Zombie Brainsaw (what?) are both guaranteed hits this fall. More below.

First up, NERF is set to release a new double-barrel blaster that will find a home in its Doomlands line. The Double-Dealer has two shooters on the front with a two-handle crossbow-like design. The side-mounted magazines hold 12 darts and are automatically fed into the barrel. Each pump and pull of the trigger fires two darts at a time.

Additional features include a “slam-fire” mode that allows you to hold down the trigger and release all the darts in a stream of NERF glory. All of the internal mechanics are viewable through the clear plastic cover, which is perfect for seeing how this blaster works but also repairing any issues. The Double-Dealer is expected to be released this fall for around $40. 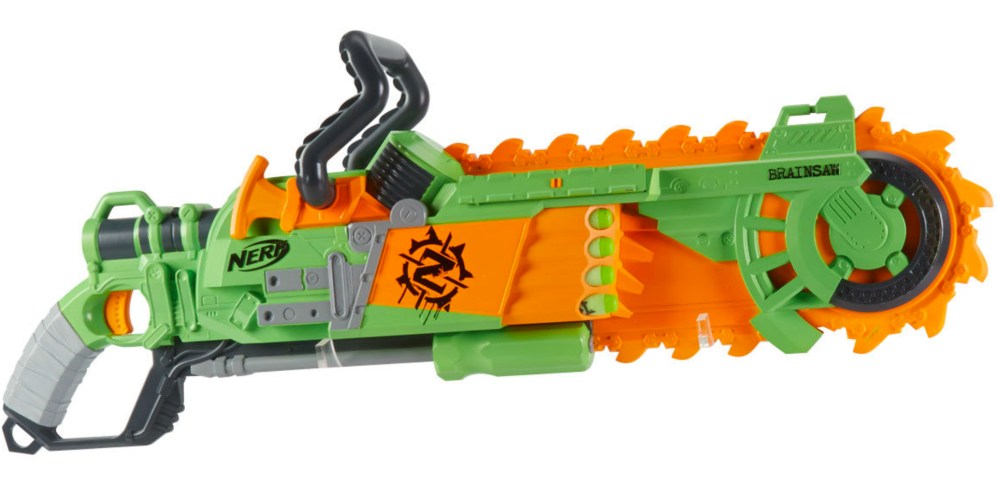 Oh yeah, and about that chainsaw-wielding Zombie-killer. The “Brainsaw”, as its called, features a foam blade that spins around and is mounted on the front as a proverbial child’s bayonet. There are eight barrels for firing, four on each side, which pack “long-range capabilities”.

Frankly, the Brainsaw is pretty bonkers. None-the-less, it’s one of the more unique releases that NERF has had recently. It is expected to ship this fall with a $30 price tag. Check out the entire line of Zombie Strike blasters for more options.