Moto X Pure Edition is one of the best phones that launched last year, and now you have even more reason to buy one. Just last month we gave it a “3 months later” second look (spoiler: we still think it’s great), but Motorola wants to make the deal even sweeter with a free Moto 360 Android Wear watch…

Sadly, this deal isn’t going to nab you one of the latest-and-greatest 2nd generation Moto 360 watches; rather, you’ll be getting the first generation model that Motorola launched in 2014. And this only comes with the purchase of the highest-capacity Moto X Pure Edition, meaning you’ll have to pitch an extra $100 to get the 64GB model. Going with the base $400 16GB Moto X isn’t going to nab you any goodies.

In the end, you’ll be getting the Moto X Pure Edition and the Moto 360 for $500 shipped, which is $200 less than their combined $700 retail value. The discount appears when you add both devices to your cart, and it notably does not apply to the Moto X Pure Edition designed by Jonathan Adler. This deal is live until Feb. 19, 2016, 10:59 a.m. CT.

All of this said, the Moto 360 is still a great little watch. And the Moto X Pure Edition is still a great phone. Perhaps one of the biggest bonuses to this deal is that you can customize your 64GB Moto X using Moto Maker, allowing you endless possibilities for the phone’s color and design. 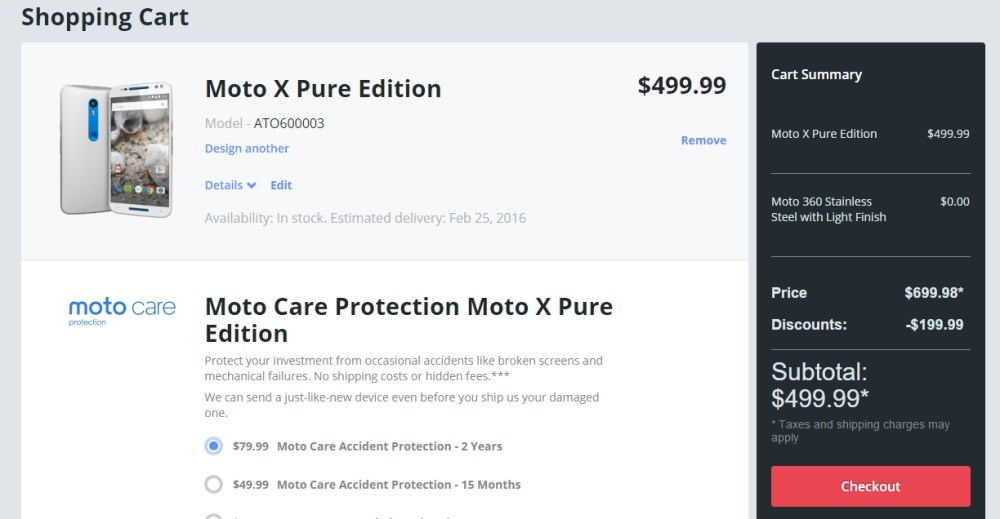