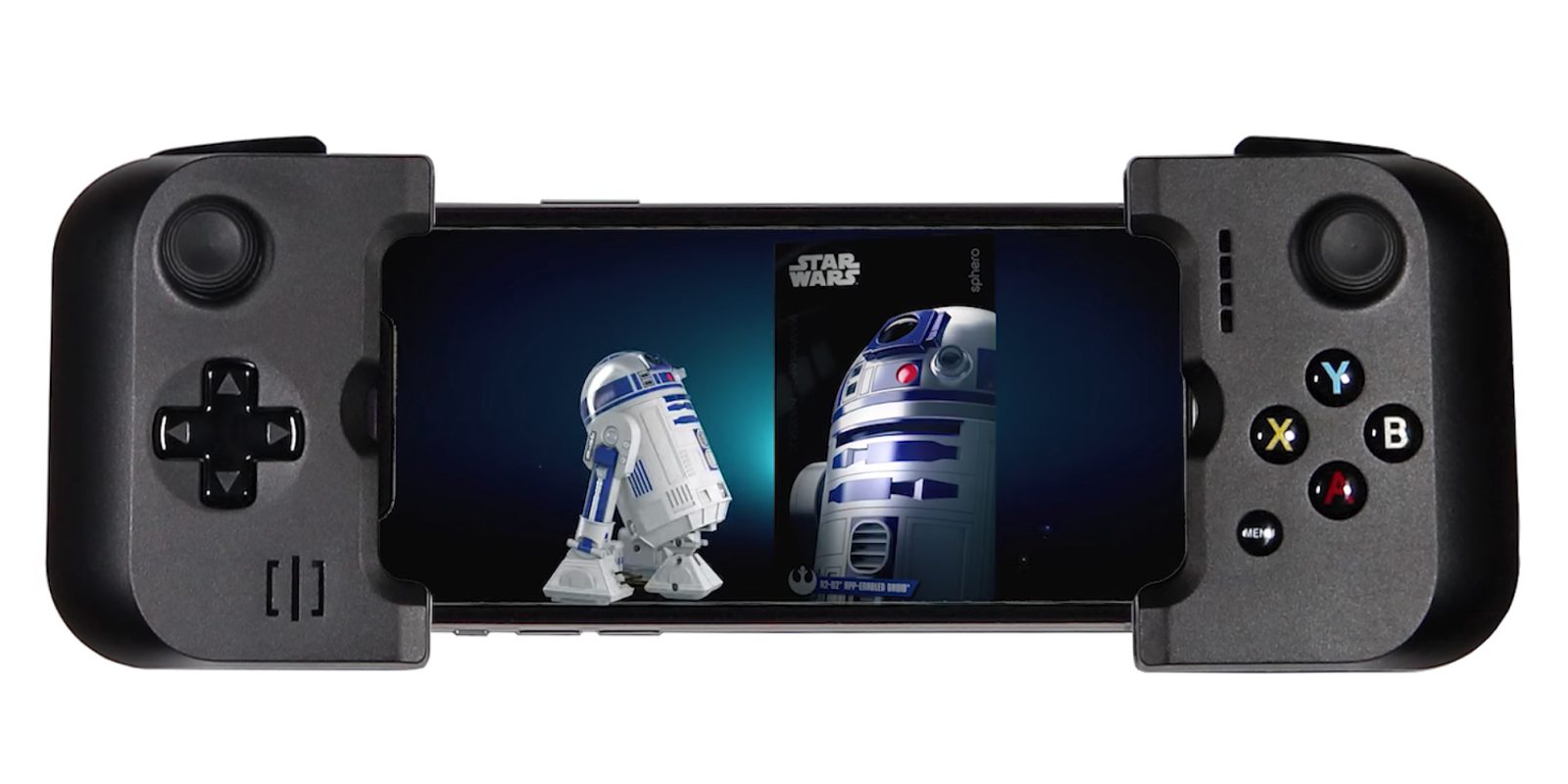 Gamevice has today announced that it is bringing support for those adorable Sphero droids to its Made for iPhone gaming controllers. This exclusive sponsorship brings the remote control to the next level with real joystick and d-pad functionality. Along with today’s news, Gamevice has also elected to drop the price on its flagship device after adding full support for iPhone X and iPhone 8.

Gamevice has held steady as the industry leader in the mobile gaming hardware category, as its popular iPhone and iPad add-ons have largely stood alone for a few years now. SteelSeries of course has its own MFi controllers, but the integrated design of Gamevice’s accessories deliver a more traditional gaming experience.

Spheros SPRK+ first received support for Gamevice controllers a while back along with integration for DJI’s Spark Drone. Today’s news brings the same functionality to the popular Star Wars BB-9E, BB-8, and R2D2 droids just in time for the release of The Last Jedi. Users will be able to move the droids around, assign buttons for specific actions, and generally enjoy greater control.

One thing that I’ve struggled with on Sphero’s Star Wars droids is the limited functionality that comes with on-display iPhone controls. The addition of joy sticks and a d-pad should bring a whole new level of enjoyment to these adorable accessories.

Along with today’s news of Sphero integration, Gamevice also announced that its GV 157 MFi controller would be receiving a 20% price drop to $79.95.

“We chose to lower the price to $79.95 as demand for Gamevice has increased due to the fact that it can now be used for more than just gaming,” said Phillip Hyun, CEO, Gamevice. “Gamevice not only makes gaming on smartphones better, but it adds precision control to app controlled gadgets such as Sphero’s app-enabled droids and DJI’s Spark Drone, with more on the way.”

The GV 157 controller is also now officially compatible with iPhone X/8, bringing a mobile gamepad to Apple’s latest devices. Best Buy and Apple have yet to show the discounted price in their online storefronts, but you can cash in on the extra savings already at Gamevice. This brings the price down to a new all-time low, as this accessories have rarely seen discounts in the past.

LOS ANGELES, CA–(Marketwired – December 13, 2017) – Gamevice, the makers of the industry-leading mobile controller, announced today that its GV 157 model is fully compatible with iPhone X and iPhone 8/8+. In addition, Gamevice has revealed full support for Sphero’s app-enabled droids, well-timed for the launch of Star Wars: The Last Jedi. To accommodate Gamevice’s expanded functionality with partners which now include drones, droids and robots, they have lowered the price of the GV 157 to $79.95, a 20% savings just in time for the holidays.

“We chose to lower the price to $79.95 as demand for Gamevice has increased due to the fact that it can now be used for more than just gaming,” said Phillip Hyun, CEO, Gamevice. “Gamevice not only makes gaming on smartphones better, but it adds precision control to app controlled gadgets such as Sphero’s app-enabled droids and DJI’s Spark Drone, with more on the way.”

Sphero’s App-enabled droids and Gamevice make the perfect gift to put under the tree this holiday season. Kids of all ages can control Sphero’s R2-D2, BB-8 or BB-9E, explore holographic simulations and starships from the Star Wars galaxy, watch the Star Wars films and more through the Star Wars Droids App by Sphero that now works with Gamevice.

With iPhone X offering Apple’s best display yet, Gamevice gives users 100% of that screen by providing an unobstructed view, an essential element for full gaming immersion. iPhone X or iPhone 8/8+ and Gamevice make the perfect combination for gaming this season, providing console quality controls to some of the hottest holiday games, including: Lineage 2, NBA 2K18, The Talos Principle, Sky Gamblers and Modern Combat Versus.

Featuring more than 1,000 games, including those optimized for the iPhone X like Lineage 2, The Talos Principle, and Grid Autosport, Gamevice gives players latency-free control over their mobile experience, along with a comfortable, ergonomic design and console-quality buttons and joysticks for all of the latest iPhones starting with the iPhone 6 / 6 Plus.

Gamevice’s GV 157, now only $79.95, is an all-in-one entertainment hub that works as a controller for more than 1,000 mobile games, DJI’s Spark drone, and Sphero’s SPRK+ and Star Wars Droids, and is now available at Gamevice.com or select retailers.

Gamevice will be at CES 2018 — join us for hands-on demonstrations of its control with the iPhone X and iPhone 8 as we show new games, drones, robots and more. Email Danitra Alomia (danitra@reverbinc.com) for an appointment. For more information or to purchase a unit, please visit: www.gamevice.com.

More than just a controller, Gamevice is an entertainment hub that transcends the boundaries of play, bringing video games, drones and toy control to one device. Mobile gamers and gadget gurus no longer have to deal with the limitations of a touchscreen as Gamevice delivers controls on par with consoles or high-end remotes. From modern console classics like Capcom’s Street Fighter IV to Mojang’s omni-platform Minecraft, there are more than 1,000 Gamevice compatible games. Weighing in at less than a pound, Gamevice was engineered specifically to enhance gaming for mobile devices.

Based in Boulder, CO, Sphero fuses physical, digital, and entertainment experiences to unlock the true potential of play and inspire tomorrow’s creators. Sphero was founded by Ian Bernstein and Adam Wilson after completing Boulder Techstars in 2010. We’re now available in 80+ countries around the globe and have sold more than one million robots to date… and counting. We’re here to rattle cages, ruffle feathers, and reinvent entertainment… all for the sake of inspiration and creation. It’s time to defy convention and change the way the world thinks about play.