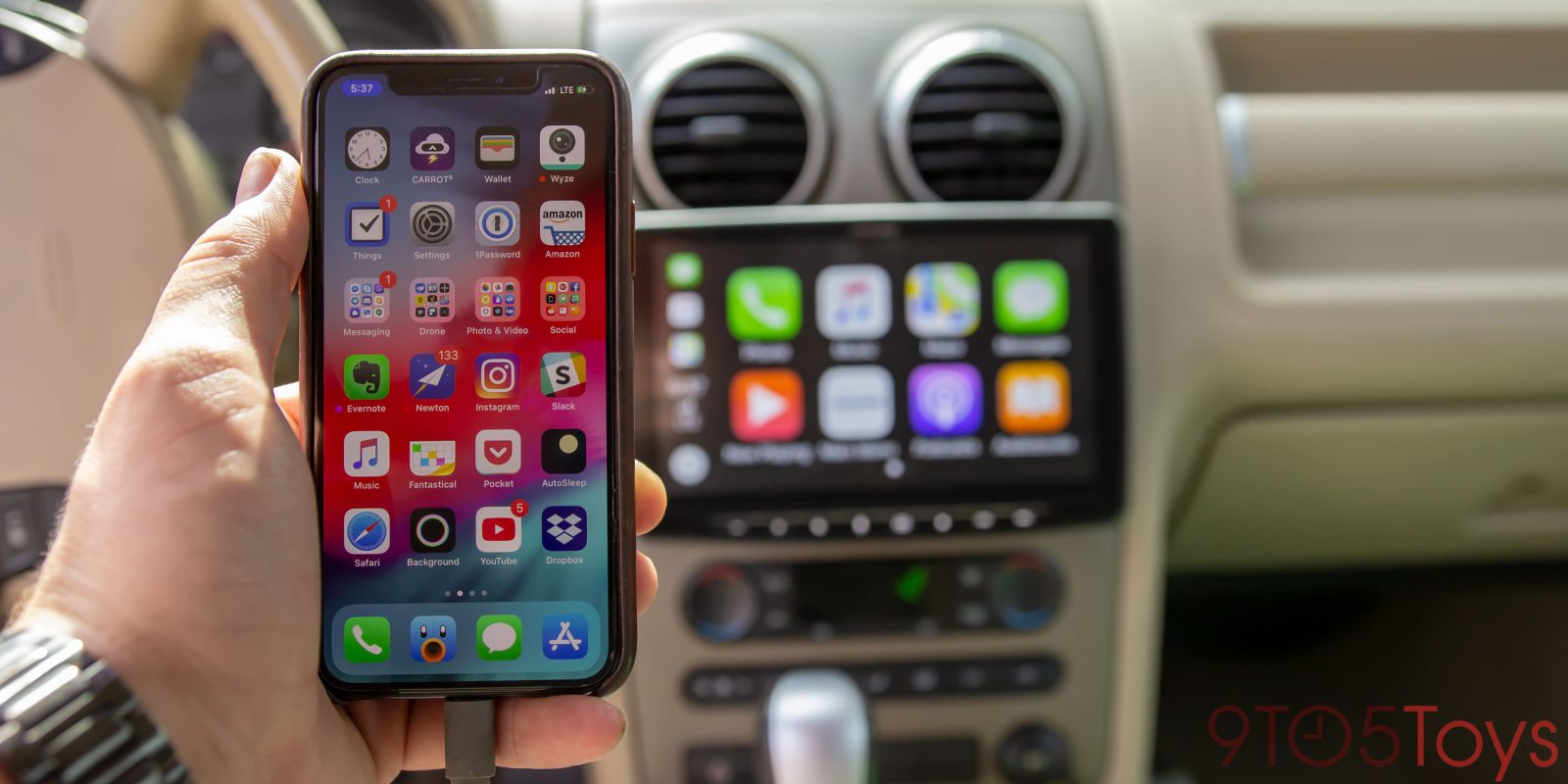 When it comes to car infotainment systems, stock units are rarely good. For years, you had regular knobs, buttons, and small screens to show you what radio station or CD track you were listening to. Fast forward to today and companies are building GPS into car radios, though the interface is never pretty, and they often feel difficult to navigate.

Alpine, an industry leader, has always produced solid car receivers, and recently has been stepping its game up with better interfaces, Android Auto, Apple CarPlay, and more with its offerings. The latest head unit from Alpine, dubbed the iLX-F309 HALO9, is one of the nicest I’ve ever had the pleasure of using, with a capacitive 9-inch touchscreen, built-in light sensor for dimming, dedicated GPS antenna, and more. This car radio has it all.

HALO9’s most unique feature is how it fits into a car. Receivers are measured by DIN (German measurement) and you can have a single DIN, 1.5 DIN, or a double DIN. Most newer cars have 1.5 or double DIN measurements, but if you’re in an older car, a single DIN is likely what you’re stuck with.

For the longest time, if you wanted a larger display in a car that had a single DIN slot, you would need to use a mechanized head unit that would slide out a screen and tilt it up, bringing it back in once you powered the car down. With so many moving parts, this was never a great idea.

Alpine changed that with the HALO9, by making a single DIN mounting apparatus with a massive screen on the front. A 9-inch capacitive touch screen, that is, which makes navigation a breeze. Don’t worry about fit either, as the display can both tilt and go up or down during installation to make sure it looks great in just about any vehicle.

The HALO9’s display and mounting system aren’t the only benefits to this high-end radio system, however. One feature that I’ve yet to see in many other head units, is that HALO9 has a photocell for dimming.

Most car radios tie into factory lights for dimming, so if you turn your parking or headlights on then the radio dims. My muscle car is this way, which is nice most of the time, but if it’s raining and I want to see my navigation at full brightness, I have to change settings.

Alpine bypasses your vehicle’s dimming system for its own, using a sensor similar to a smartphone which will monitor the ambient light to turn down the screen’s brightness only when it’s actually needed. I much prefer this to any other dimming method, and wish more manufacturers offered it. 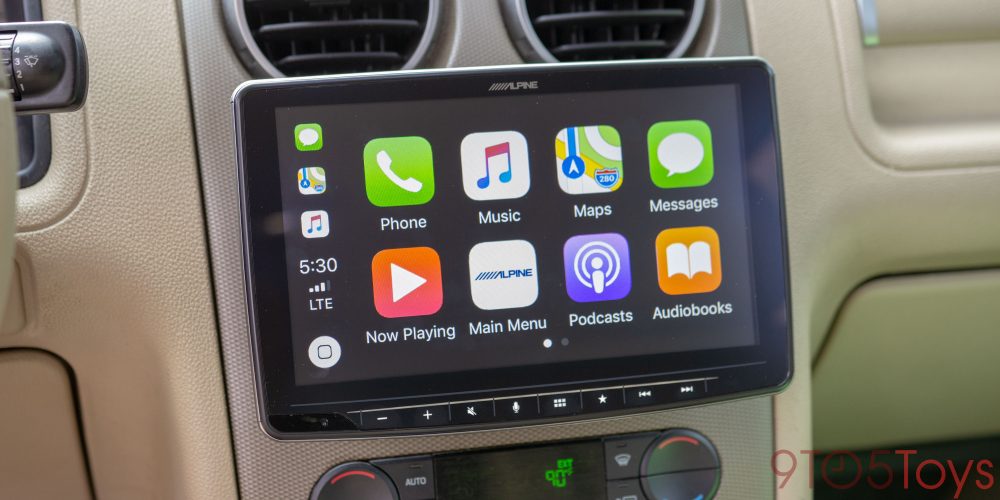 Alpine’s HALO9 packs Android Auto and Apple CarPlay through the same USB port, which is a huge bonus in my book. I have used Pioneer for years, and having two separate USB ports for Android Auto or Apple CarPlay can get really annoying, really fast.

Alpine’s interface is well thought-out, and easy to use for the most part. The buttons on the front are simple, laid out well, and function without issue. Meanwhile, the favorites button is easy to use when you want to switch sources, channels, or other features with just a few quick button presses.

Touch responsiveness of this capacitive screen is quite amazing, especially coming from a resistive screen on my old Pioneer radio. Because of how it mounts, the screen sticks away from your dash however, resembling the new Tesla Model 3 display as well as many high-end Mercedes vehicles. 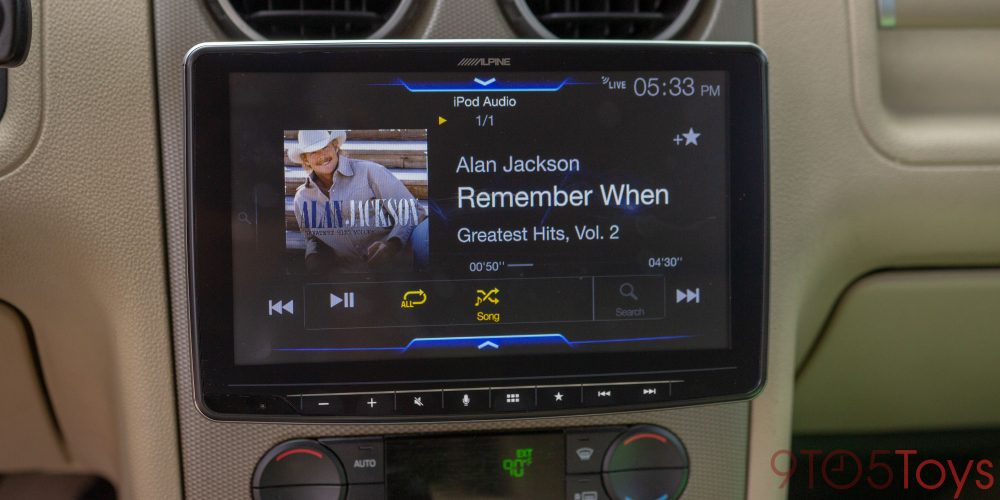 When it comes to audio, I normally do custom tunes on the EQ since I have aftermarket speakers, amps, and subwoofers in my SUV, but the HALO9 needed none of that. Alpine had one of their own representatives tune the system for the perfect sound, and he landed on flat with a few minor tweaks to the subwoofer crossover (which are mandatory) for the best sound, and I fully agree with him.

This head unit powers my speakers and works with my subs perfectly, and I’ve yet to have any type of issues when listening to any genre of music through this system. I can get both very loud, or leave it quite quiet and hear all instruments without issue.

In the end, the Alpine HALO9 in-dash radio is a fantastic head unit, though quite pricy. Amazon charges just under $900 from trusted retailers and Crutchfield has it listed for the same. If you include install, this head unit can cost well over $1,000. Best Buy’s Total Tech Support should cover the install of this radio into most cars, but do know that if your vehicle requires anything special there could be additional charges.

Is it worth it? Well, if you have a single DIN slot in your car, this is one of the most elegant ways to add a higher-end large-screened radio to it. If you’re looking for a high-end radio that has a capacitive screen, 9-inches of navigation glory, and a very fluid user experience, this is also for you. If you’re just wanting to add CarPlay or Android Auto to your vehicle, then you’re best to stick with a more budget-friendly option.